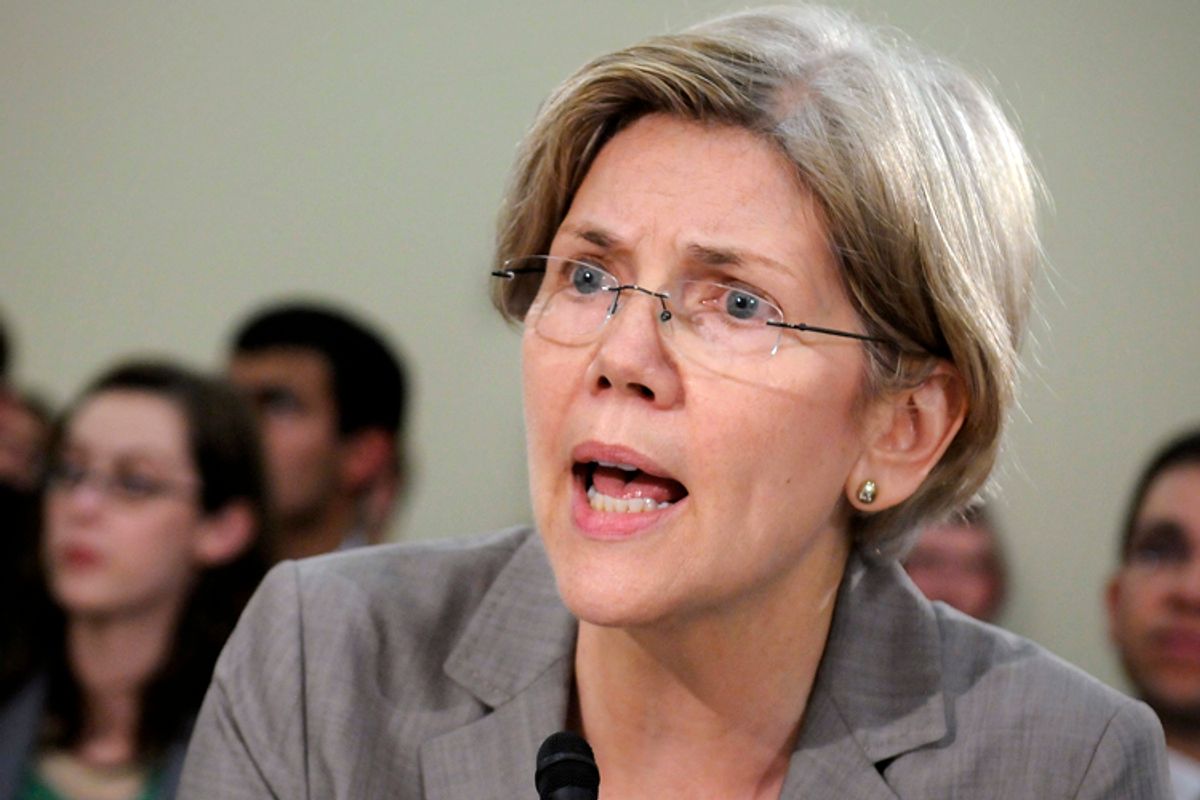 On Friday, Jim Kessler, vice president of the centrist Democrat think-tank Third Way, took to the airwaves to defend his organization’s recent attack piece on the Senator. That editorial, which was published in the Wall Street Journal last week, blasted Warren for supporting an expansion of Social Security.

Kessler doubled down on Third Way’s anti-Warren messaging during his appearance on Sirius XM radio, telling host Ari Rabin-Havt that she is “starting to get out of hand.”

Ignore the not-so-hidden sexism in that comment, and consider for a second what’s really going on here.

Jim Kessler and the corporate Democrat “moderate” types who support Third Way are absolutely terrified. They’re terrified that Elizabeth Warren and her supporters will upend the stranglehold they’ve had on Democratic politics since the Clinton era.

So now they’ve joined Republicans in declaring an all-out war on her and everything she stands for.

Warren has said that she won’t run for President in 2016, but that doesn’t really matter. Because even if she makes good on her promise to fill out her Senate term, Warren’s message and her supporters will continue to threaten what the Democratic establishment sees as an easy road to a second Clinton presidency.

So make no mistake about it—that Wall Street Journal editorial was just the start of a big multi-year smear campaign against progressives who might represent a threat to Hillary Clinton in 2016.

And here’s the thing—those establishment Democrats know that Elizabeth Warren is spot-on when it comes to policy issues.

The idea that Social Security is about to go bankrupt is just completely false. It’s currently running a $2.8 trillion surplus, a surplus that’s expected to rise even higher by 2020.

But while Social Security is working fine, our retirement system is failing—almost half of retirees have less than $10,000 in savings.

And as everyone learned back in 2008 when the financial system collapsed, the 401(k)’s that many Americans now rely on to make ends meet when they leave their jobs are risky and unstable.

To make matters worse, it’s not like pension plans are any safer either. Just ask any retired Detroit firefighter for proof of that.

Reasons like this, coupled with the reality of the increasing cost of living, are why Senator Warren wants to increase Social Security payments using a formula called CPI-E.

Using CPI-E would only result in about a $56 dollar increase for seniors receiving Social Security checks in 2013, but it’s a good start that could be paid for by simply raising the maximum payroll tax so that the wealthy pay as much into the system as everyday people do.

And what’s more, just acknowledging that the current system needs to be expanded would be enough to change the debate about Social Security and could get policymakers thinking about new ways to make the program more effective for seniors.

So Elizabeth Warren is right. We need to expand Social Security. But she’s only got half the story. If we really want to not only protect retirees and the economy but also increase job opportunities for young people entering the job market we should go even further.

We should do what I’ve proposed doing for years: lower the retirement age to 55 and increase benefits by 10 to 20 percent so that they match up with what they were back in the 1960s.

Doing so wouldn’t just save seniors from an uncertain retirement—it would also jump-start the economy. By allowing Baby Boomers to retire early, we would open their jobs to young people struggling to start their careers.

At the same time, we would tighten the labor market so much that wages would actually rise, in turn stimulating the economy. And as wages rose, so too would tax revenues. In other words, that 10 to 20 percent benefit increase would pay for itself, and reduce the deficit!

The solution to our retirement crisis is clear: take Elizabeth Warren’s proposal to expand Social Security and crank it up a few notches.