How to tell which Republicans care about their constituents' health

A new moral dilemma: Now that Healthcare.gov is working, some Republicans have a moral quandary to consider 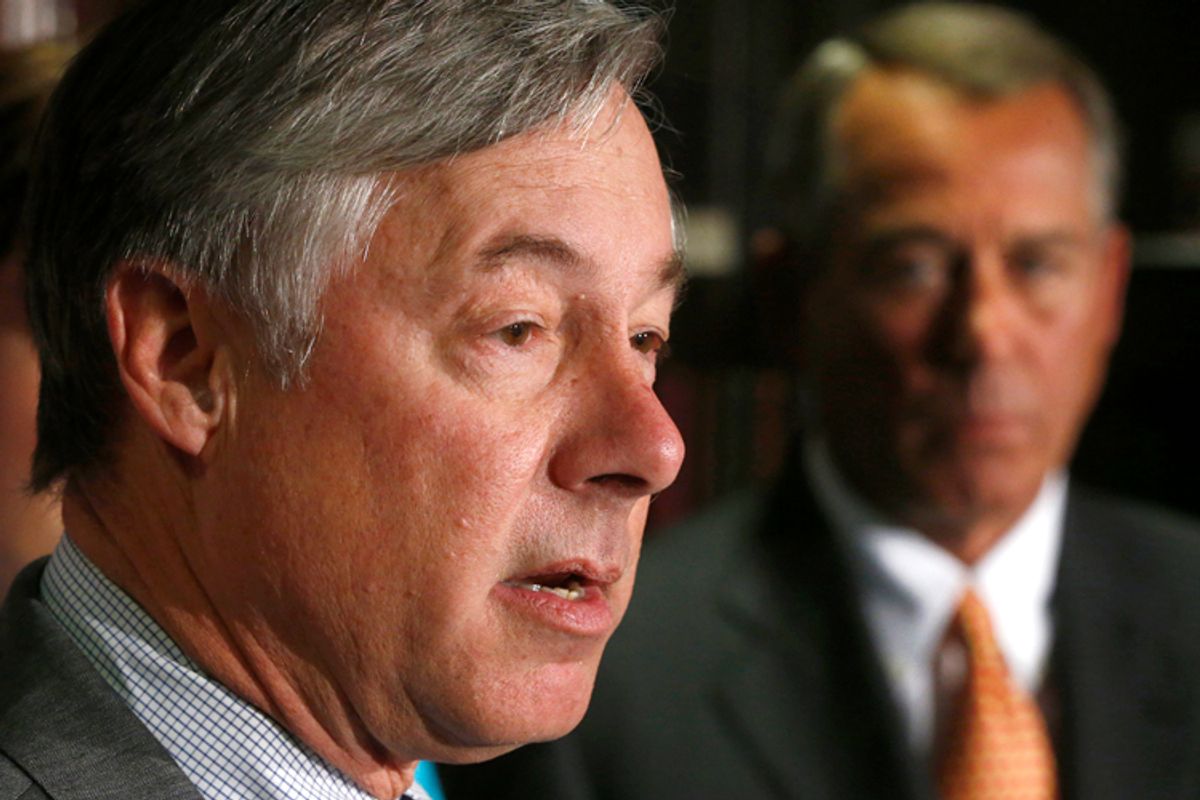 "We do look forward to having you back in December to get an update on where we are," Rep. Fred Upton, R-Mich., chairman of the House Energy and Commerce Committee, admonished Health and Human Services Secretary Kathleen Sebelius, at the end of a three and a half hour grilling before his panel. "I want you to know we're going to want real numbers -- you'll have them by then -- in terms of the signup."

That was Oct. 30, the nadir of an Obamacare rollout that never really poked its head above sea level. For Sebelius, autumn was marked by "Kangaroo court" appearances on Capitol Hill, during which Republicans alternately relished Healthcare.gov's failure and chastised her for allowing it to fail.

Upton's warning was suffused with an anticipation that Sebelius would return to his committee in early December with only more bad news to share.

Well, kind of a lot's happened since then.

Healthcare.gov is now working well enough to sign up tens of thousands of people a day. The improvement is both anecdotal and rooted in data. The administration, its allies, and insurance companies are now stepping up enrollment campaigns that were put on ice in October and November. Thousands of people whose insurers canceled their coverage, or who got stuck on Healthcare.gov last month, are now relieved to find reasonable options available on the federal exchange ahead of the Dec. 23 deadline to sign up for coverage that begins Jan. 1.

All of which is to say Republicans won't be able to replay the attack on Sebelius that they mounted in October. (Perhaps, like Speaker Boehner, they will pivot from pretending to care that the website didn't work to complaining that the administration spent money to fix it.)

But if the big story is the turning tide of Healthcare.gov, the corollary is that committee Democrats don't have to sit around playing defense against GOP attacks. They can attempt to reorient the debate around Republican efforts to discourage enrollment -- particularly now that their constituents can, for the most part, actually access the law's benefits.

At the end of August, committee Republicans took it upon themselves to bog down state agencies and nonprofit groups that received Obamacare “navigator” grants — organizations that will help educate people about the law and facilitate their enrollment — by requesting reams of information from people who were supposed to be stepping up outreach efforts.

The committee targeted navigators in states with the largest uninsured populations. Several had to drop out of the program or grind their work to a halt.

When the site launched and crashed, those same navigators found their ability to help people badly compromised. In that vacuum, Republicans attacked their credentials and raised unfounded doubts about their scrupulousness. (During this time, the unprincipled conservative video maker James O'Keefe uncovered a single instance of navigators behaving badly. One Urban League employee -- who wasn't a navigator -- was fired and three others had their certifications stripped.)

Now that the site is working, navigators suddenly find themselves at the center of a ton of Obamacare success stories.

“I was hearing so much about the glitches in the system that I was worried that it wouldn’t work,” said Caroline Moseley, 54, who lost her job as a housing program analyst for the City of Philadelphia. After asking a navigator from the nonprofit Resources for Human Development for help in finding a plan, Ms. Moseley chose one that costs $27 a month with a $6,000 deductible. “It was a great experience,” she said. “The site was running very smoothly. It took about 30 minutes tops.”

Stephanie Lincoln, 60, of Lansdowne, Pa., also had quick success with the exchange — after a frustrating experience trying to submit an application online in October and November. With the help of a navigator, Caroline Picher, working at the local library, Ms. Lincoln signed up in just one hour on Friday for a policy that will cost $113 a month, with no deductible.

“I am one of the people whose plans were canceled,” Ms. Lincoln said. “It was just the easiest thing in the world.”

Here's one from the State in South Carolina:

An elbow-injuring fall in March proved nearly as painful financially as physically for Carolyn Gates, who was uninsured and ended up with an $8,000 bill for her emergency room visit.

She felt much better Wednesday after a visit to the S.C. Progressive Network’s Columbia office, where she worked with Navigator Tim Liszewski to sign up on the Health Insurance Marketplace under the Affordable Care Act. While Gates and her husband slowly pay off that emergency room debt, she’ll also be paying a $107-per-month health insurance premium next year.

“As far as I’m concerned, it was the best thing ever,” Gates said. “I told my Bible study about it, and three said they’re going to sign up.”

And here are several more from the St. Louis Post Dispatch:

At the Columbia location of Primaris Healthcare Business Solutions, an enrollment event Monday proved successful for all of its visitors. Jeremy Milarsky, navigator program manager, said he didn’t experience any website glitches and all of his appointments with consumers ended in successful plan selections.

“Today was, I would say, an enrollment event with a capital ‘E,’” he said.

The St. Louis Area Agency on Aging, another nonprofit group assisting consumers with health insurance enrollment, held several outreach events this week. Mark Smith, case management coordinator, said navigators are still seeing some website problems, but also significant improvement. The new feature that allows users to delete their applications and begin again has helped, he said, and the majority of people at the events have been able to select a plan.

The lesson here isn't that Obamacare enrollments have reached escape velocity or that the administration will hit its enrollment targets, but that the capacity now exists for any member of Congress with the best interests of their constituents at heart to help anyone who needs coverage find and enroll in a plan that best suits their needs. Wednesday's hearing will be a great opportunity to expound upon that moral imperative.