While a cellphone pic went viral, the president was engaged in high melodrama with his South African counterpart 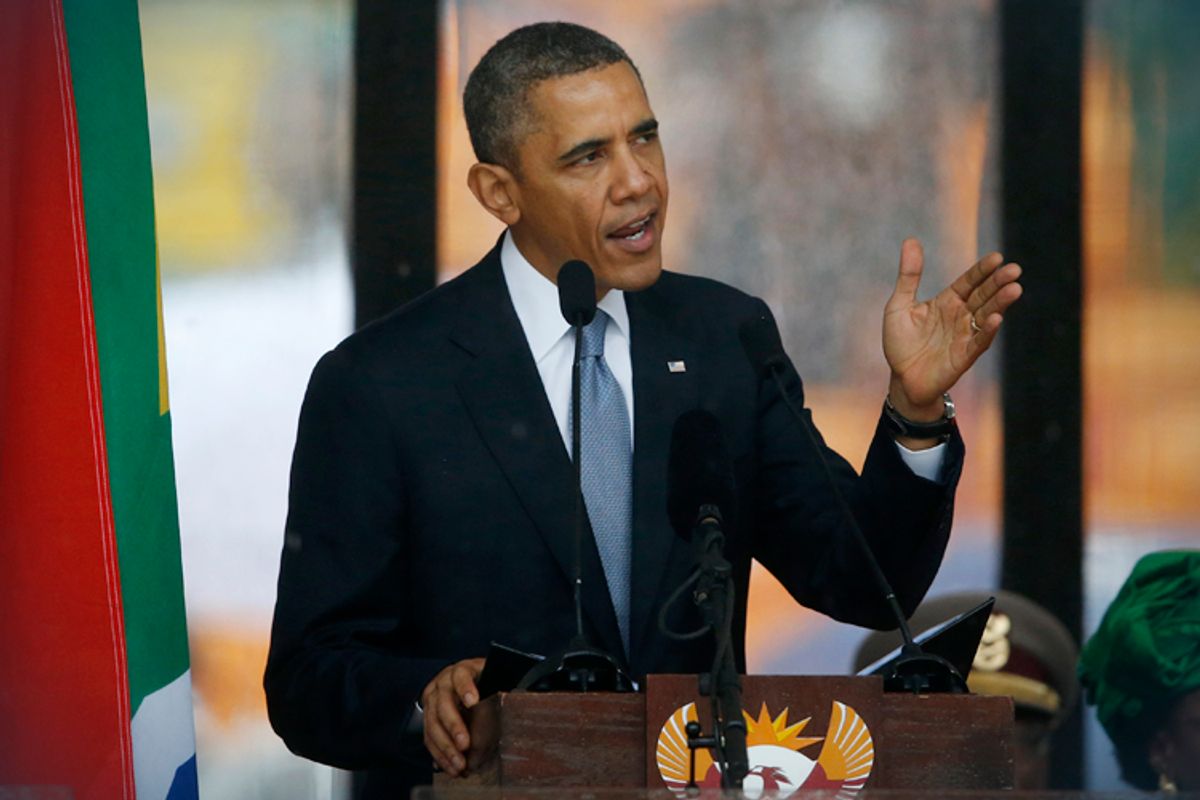 SOWETO, South Africa — The American press may have been obsessed with a selfie and made-up depictions of Michelle Obama, but there was a real story at Nelson Mandela’s memorial service in South Africa Tuesday that they missed. Call it the tale of two beleaguered presidents.

On the one hand, there was President Obama, who received a rousing ovation from a crowd of 70,000 when he first appeared on a giant video screen at FNB Stadium in Soweto — an early sign that his trip to South Africa would provide a welcome respite from the continuing agita he has faced at home throughout the implementation of healthcare reform.

Mourners again cheered wildly when Obama got up to speak, and throughout a moving address in which he urged them to not just remember Mandela as an icon, but to put the power of his ideals into action.

On the other hand, there was Jacob Zuma, South Africa’s president, who was roundly booed when he entered the stadium and each time he appeared on a pair of giant video screens.

Zuma has been heavily criticized for the so-called Guptagate, in which a private plane chartered to ferry 200 guests from India to a family wedding of a prominent business family was allowed to land at a national air force base; he has denied having knowledge of the situation. And a report from the national public protector is expected shortly on some $20 million in government funds used to renovate Zuma’s private home.

Seemingly each time Zuma’s image popped up on the screen, or his name was mentioned, the crowd jumped to their feet and rolled their wrists like a soccer referee indicating a substitution, shouting “change.”

Things got so bad that Cyril Ramaphosa, the deputy president of the ruling African National Congress, who was serving as master of ceremonies, repeatedly urged the crowd to show “discipline,” and said in Zulu that the country could deal with its problems after the visitors who came to honor Mandela left.  A clearly upset Archbishop Emeritus Desmond Tutu admonished the mourners to be so quiet that he could “hear a pin drop.” The headline in Wednesday morning’s Times, a major national newspaper, screamed "Rain boo Nation."

“People thought that Mandela’s death would deflect attention from all of Zuma’s problems, but it seems to have shed even more light on his troubles,” said Mcebisi Ndletyana, head of the political economy faculty at the Mapungubwe Institute for Strategic Reflection in Johannesburg. “He’s now standing talking about Madiba and we’re not matching up.”

The booing immediately sparked a national debate over whether Mandela’s memorial was an appropriate time to air political grievances. The African National Congress issued a statement to local media that contended the jeers were orchestrated and organized by Zuma opponents.

In an editorial, the Times declared that Zuma’s humiliation was deserved, but ill-timed and said that it was made worse by the fact that Obama, U.N. Secretary General Ban Ki-Moon and even F.W.  de Klerk, South Africa’s last apartheid-era president, received warm receptions.  At one point, Zuma was shown on the screen right after Obama and the opposite reactions might have made even the staunchest Zuma opponent feel bad for him.

“We are showing maturity in our democracy that we are not just following our leaders,” said Charles Radebe, 40, a lawyer in Johannesburg, who said he was in a section of the stadium that was particularly vocal in its disapproval of Zuma. “I don’t care which platform. We are suffering now and we must show it anywhere.”

Not only did he garner headlines by shaking hands with Castro, but his eulogy was widely cited by South Africans who attended as the highlight of the service; and many left as soon as it ended, not waiting to hear Zuma. They particularly enjoyed his reference to the South African spirit of “ubuntu,” bursting into applause when Obama mentioned it.

“Mandela understood the ties that bind the human spirit,” Obama said. “There is a word in South Africa — ubuntu — a word that captures Mandela’s greatest gift: his recognition that we are all bound together in ways that are invisible to the eye; that there is a oneness to humanity; that we achieve ourselves by sharing ourselves with others, and caring for those around us.”

The banner headline in the Pretoria News Wednesday declared, “Obama’s Moving Eulogy,” and the story headline read,” US president steals show with stirring tribute to tata,” using the Xhosa word for “father.”

Obama "won the day," but it remains to be seen if he can live up to his lofty words when he returns home, or if the divergent tale of the two presidents becomes one once he lands in Washington. Based on the coverage of the U.S. media -- fixated on selfies and fake sign language interpreters -- it looks like it was a moment that may be confined to its particular time and place.