Video games' race problem goes all the way to the top

What we really need to fix is an insular industry, and a gaming culture that punishes people for bringing up race 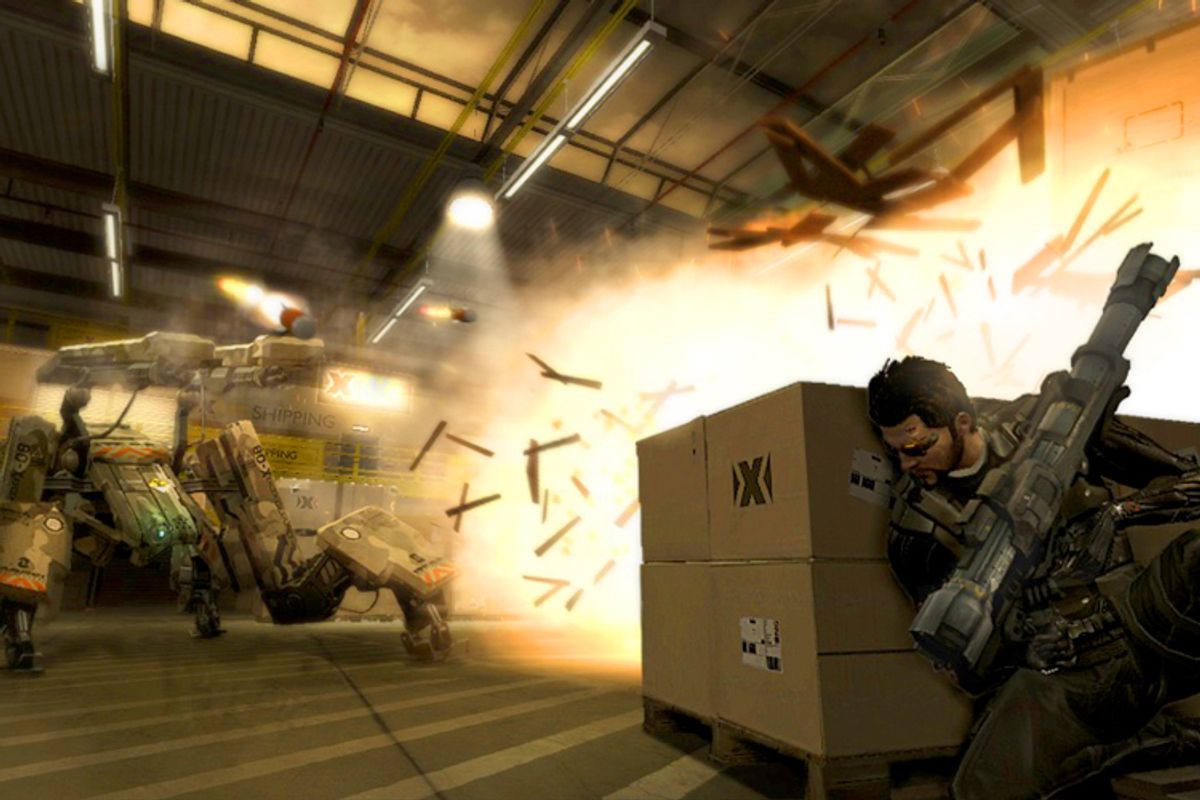 In gaming culture, calling a game “racist” is much like releasing blood into a shark pool – it invites an attack. Case in point: The 2009 flash game "Ching-Chong Beautiful" parodies Japanese game shows using exaggerated pan-Asian characters speaking in broken English; it also uses racial slurs like “zipperhead.” In an online discussion of the game, players pointing out the problematic elements were told to “cool down” because the game was “fun to play.”

Not much has changed in the intervening four years. Just this October, indie PC title “The Stanley Parable” creator Davey Wreden reportedly altered an in-game visual gag of a small “third-world” boy set aflame after receiving a complaint from a player. Escapist Magazine's coverage of the change was met with the exquisitely derogatory comment: “If this had been any other race than afro ‘oh lawdy sah dis is cotton pickin racist’ this wouldn't be an issue.” While the “issue” of racism creates bad press for game makers, the cost of calling out racism in games is personal attacks and dismissal. Just as critics like Anita Sarkeesian are targeted for expressing their views, gamers who criticize problematic content are doubly victimized: not only are we undermined by games’ content, but we are also attacked for voicing our concerns in gaming spaces. The answer to the question “are video games racist?” seems obvious.

However, exploring this question reveals how much further the conversation on racism in gaming needs to go before change is possible. As part of the “PBS Game/Show” Web series on “the relationship between video games and modern life,” host Jamin Warren discusses the racism of the medium. As Warren reports, 85 percent of game characters are white, despite studies reporting that African-Americans and Hispanics play and buy games more often than white players. Warren discusses the similar homogeneity of “indie” gaming and briefly shows clips of racism in gaming – including the "Elder Scrolls" series, a fantasy role-playing game that depicts Sub-Saharan Africans as stronger but less intelligent than other groups, and the controversial homeless black woman from "Deus Ex: Human Revolution."

But Warren goes on to argue against himself. He mentions the technical difficulty of rendering “curly” hair and making different skin tones visible to players in the routinely dark settings of video games. Given the plethora of first-person perspective games (wherein the player’s avatar is glimpsed only briefly) and of non-Caucasian skin tones clearly visible in the dark, these justifications are unconvincing. Not only is Warren disappointingly uncritical here, but he fails to illustrate the totality of discrimination in the gaming industry – not only toward its characters, but toward its players and its workforce. He implicitly reduces racism to a numbers game solved by adding more brown characters: a cheat code for tokenism, not diversity.

But the core problem with "PBS Gameshow’s" video and the general conversation on racism in games is not one of implication. “Are games racist?” is not the way to begin the conversation on racism in video games. The framing of the question itself reflects a popular, yet nonetheless erroneous, understanding of the word “racist.” In “The Good, Racist People,” Ta-Nehisi Coates writes that, “In modern America we believe racism to be the property of the uniquely villainous and morally deformed, the ideology of trolls, gorgons and orcs.” From the popular perspective, even the notion that games may be racist implies that the medium, and by proxy its players, is itself uniquely villainous or morally deformed.

This is a noxiously similar framing to the decades-old question of whether video games “cause violence,” itself a relic originating after the Columbine massacre to scapegoat games, create outrage and feed the 24-hour news cycle. Unfortunately, it arises almost yearly alongside the nation’s tragic cycles of mass shootings. Asking if games cause tragedies essentially asks “Are video games evil?” and aligns players with the inhumanity of mass shooters. Similarly, asking “are video games racist?” aligns players with the storied racism of slave owners and the Ku Klux Klan.

And as racism has evolved since then, so must our tactics to unearth and combat it.  Games must move beyond historicized, uncritical hurdles that only see racism in the atrocities of the past. Asking the same old question won’t allow gaming to modernize its understanding of how racism arises in our own lives in insidious, implicit ways. So gamers can recognize the abhorrence of “Custer’s Revenge,” a 1982 Atari title about the rape and bondage of a Native American woman, but the veneer of humor and irony make “Ching-Chong Beautiful” defensible.

“Are video games racist?” is not an evolved enough question to ask today. Instead of prompting a discussion, it puts the medium and its players on trial. Asking “is the game you’re playing racist?” is to ask “Are you racist (for playing this game)?” The racial anxiety triggered by accusations of racism by proxy is spelled out across the forums and comment boxes of (mostly white, mostly male, mostly cis-gendered) players fighting a judgment we didn’t make.

This casts the outright dismissal and strident defensiveness of these gamers in a new light. Gamers are saying: “I’m not racist for playing this game because the game is fun to play regardless. I’m not racist for playing this game because non-white people aren’t realistic in this setting. I’m not racist for playing this game because race doesn’t matter.” This defensiveness may serve to alleviate anxiety, but it limits discussions of racism to a moralistic and  individualist framing. It debases the medium by denying its complexity. Video games are composed of many elements: setting, characters, art design,  narrative, gameplay, dialogue, etc.) and each has social responsibility. Instead of accepting that, calls for diversity, inclusion and open conversation are all trivialized as ways to brand the industry and its players as “racist,” i.e., evil, instead of ways to make gaming better. In fact, the effort to address racism is already thought of as a game: “playing the race card.”

So how do we start the conversation on racism in video games? We start with the right question: “Are gamers willing to call out video games for their racist elements?” We start by confronting the stifling, retaliatory climate that forecloses all conversation. We start by questioning our comfort with other players’ erasure. We must examine why massive anxiety is triggered by accusations of racism and sexism, but not by the huge disparity in the treatment of players according to their race and sex. We start by believing this is a medium bound only by the limits of users’ imaginations and not by the limits of racial palatability.

In his Atlantic piece, Coates writes that the popular understanding of “racist” persists because it's reassuring:  “The idea that racism lives in the heart of particularly evil individuals, as opposed to the heart of a democratic society, is reinforcing to anyone who might … find their tongue sprinting ahead of their discretion.” Similarly, gamers reinforce a script of "outcry-backlash-backlash" by treating each accusation of racism as an outlier instead of seeing it as a symptom of the problems with the industry and the culture at large.  A more evolved stance would emphasize the insularity of video game producers, in both independent and mainstreaming gaming, and how this perpetuates cultural illiteracy. Thus the reoccurrence of racist elements becomes less a marker of villainy and more a consequence of the way the industry is structured. This is where diversity is needed – the top. Not just among the playable characters.

What Warren and "PBS Gameshow" articulate remarkably well is why the gaming industry needs to confront its own racism: “Representation matters. A study in New Media and Society shows media serves as a marker to let members know that their group carries weight in society. Or, to put it in political slogan terms: You can’t be what you don’t see.” The ultimate goal of asking if games are racist is not more brown characters stuck in the sidekick ghetto. It is crafting a medium capable of offering playable experiences as diverse -- and imaginative -- as its users.

Sidney Fussell is a freelance writer and critic who writes frequently on progressive intersections in gaming, including abortion, tokenism, racial violence and sexuality. His work has appeared on Pixels or Death, Venturebeat and Gamasutra, among others. His twitter is @sangfroid_san and his editorial portfolio is available on Wordpress at sangfroidfussell.