Voucher-mania: Why the right is diseased (and out of ideas) 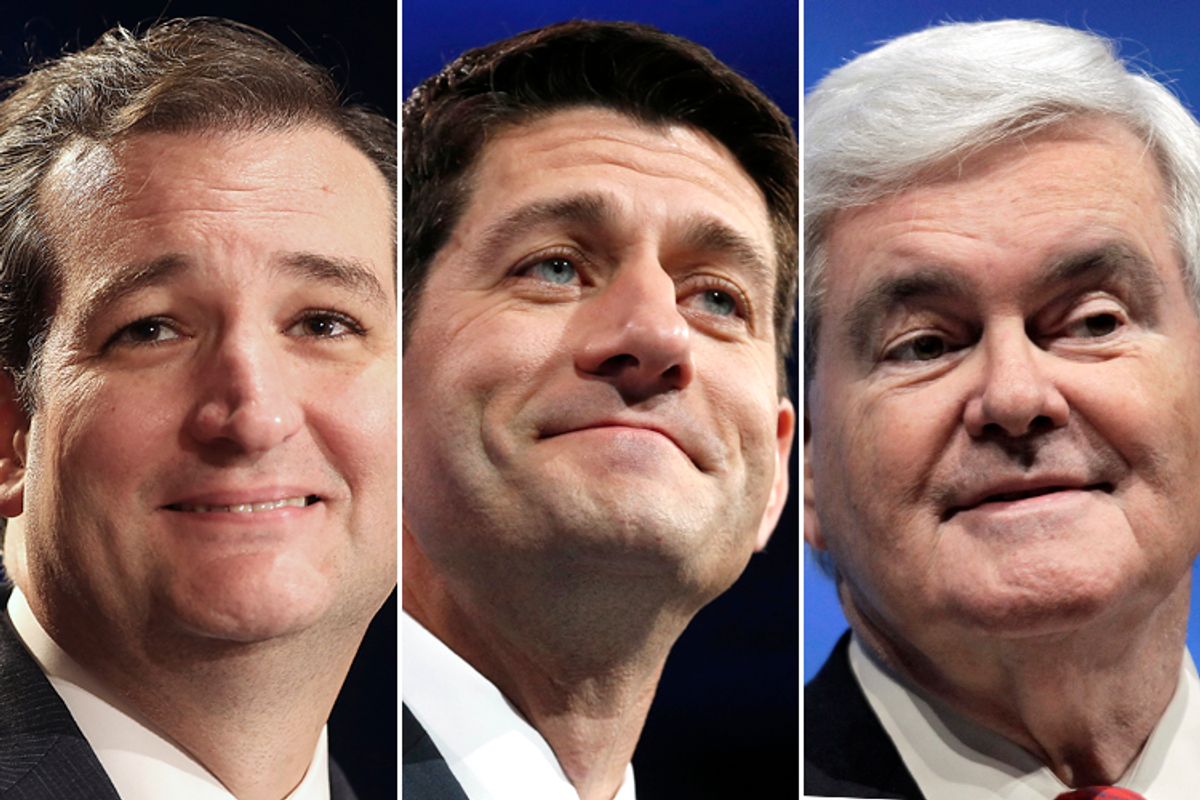 “Vouchermania” may be the term used by future historians to describe the puzzling rage for vouchers that has swept the right wing in the last few decades. You got a problem? I got a voucher.

Education? The right wants to give people vouchers to buy K-12 schooling from private schools, or, failing complete privatization, from charter schools.

Healthcare? The right wants to replace Medicare and Medicaid with vouchers to let people shop for health insurance or healthcare in a deregulated healthcare marketplace.

The environment? Cap-and-trade, now demonized by conservatives, originated as a pro-market alternative to direct regulation of greenhouse gases.

So far conservatives haven’t proposed voucherizing the Pentagon, but it is probably only a matter of time before some ambitious young right-wing intellectual devises a scheme of personal defense vouchers, which individuals could choose to spend on U.S. military services, foreign armies and navies, mercenary gangs or, perhaps, to bribe the enemy into sparing him or her.

What accounts for this conservative obsession with vouchers? Right-wing vouchermania, I would argue, has more to do with politics than with serious economics or policy analysis.

Today’s American right is an uneasy coalition among libertarian plutocrats and working-class and middle-class whites who depend on Social Security and Medicare and can’t afford to send their children to expensive private schools.  The need to win white middle American votes means that the right can’t simply promise to abolish public services, leaving the mass of Republican voters on their own.  In order to be electable, conservatives have to abandon pure libertarian principle and accept the idea of vouchers funded by taxation — even though this is really just “voucher socialism,” as hardcore libertarians sometimes point out.  But this doesn’t necessarily harm the right-plutocrats, particularly if they can invest in health insurance, private schooling or retirement savings companies that can vacuum up voucher money.

That’s the political strategy behind Vouchermania: holding the billionaires and the populists together in the GOP coalition.  The intellectual case for vouchers depends on the claim that goods and services comparable to those provided by public programs like public K-12 education, Social Security, Medicare and Medicaid can be provided just as well by vouchers — but far more cheaply.

How are voucher systems, funded by taxation, supposed to save the taxpayers money, compared to public programs?  Conservatives and libertarians put forth two different answers.

The first answer is that vouchers, even though they are paid out of taxation, will reduce costs because competition among multiple providers of education, health or retirement security will drive down prices. This rests on the assumption that the government is an inefficient monopoly that raises prices above what they would be in a competitive market.

The second answer is that vouchers will reduce costs by discouraging overconsumption of particular subsidized goods and services by citizen-consumers. This rests on the assumption that rising costs in healthcare and higher education tuition are caused by Americans buying too much of both, because Uncle Sam is footing some or all of the bill.

In the medical realm, if citizens have to pay more — for example, in the form of higher deductibles — they will either force medical providers to cut costs and offer them bargains or, failing that, will go without drugs and treatment and die sooner. Either way, the public cost of healthcare to taxpayers — particularly to the rich people who pay most taxes -- is reduced.

Needless to say, when trying to sell voucher schemes to voters, conservative policymakers and pundits stress the cost-savings-through-competition argument, rather than the cost-shifting argument, which implies that most Americans, including most Republican voters, are “overconsuming” healthcare and higher education. Even so, it is clear from plans to use “premium support” to voucherize Medicare that most of the savings would probably come from forcing Americans to consume less healthcare by making them pay more out of pocket, not from competition among providers. If major insurance companies lack the leverage to bargain down drug prices, hospital prices and physician fees, can any rational conservative honestly believe that Grandma can do so, by comparison shopping?

Unlike conservatives, who seem never to have met a social problem that vouchers could not solve, progressives are not always in favor of public programs or always opposed to vouchers. School vouchers are used in social democratic Sweden, and “service vouchers” for household work have been adopted to combat the black market in labor in some European nations. I myself have proposed that the U.S. adopt a service voucher program for the elderly. Mike Konczal of the Roosevelt Institute has written for the New America Foundation about the pros and cons of vouchers or “coupons.”

Indeed, most progressives today defend two major voucher systems—the new Obamacare system and the old food stamp system. Obamacare resulted from the same conservative voucher ideology that produced Romneycare in Massachusetts. If it had been enacted by a Republican president, the right would almost certainly support it.

The right-wing hostility to food stamps is even more hypocritical. After all, the orthodoxy on the right is that universal, public programs like Social Security and Medicare should be replaced by means-tested programs based on vouchers. Well, the food stamp program is means-tested and based on vouchers that purchase specified goods in private markets. The right hates the food stamp program anyway, not because it fails to conform to the right-wing policy ideal, but because its beneficiaries are disproportionately poor and nonwhite.

From a progressive perspective, then, vouchers sometimes might be a useful way to deliver goods or services to people as a matter of public policy. But vouchers should not be used, as many on the right want to use them, as a camouflaged way to cut benefits to working-class and middle-class Americans, by increasing out-of-pocket costs. If the right wants to cut benefits for most Americans, it should say so honestly, and not try to disguise what it is doing by inflation adjustments like “chained CPI” or vouchers accompanied by high out-of-pocket payments.

Vouchers are also a bad idea in industries where, because of economies of scale, natural geographic monopolies or other factors, a competitive market doesn’t exist. Pouring subsidies into a market dominated by oligopolies or monopolies simply allows the providers to jack up prices — as the American healthcare industry and the American higher ed industry have done.

In the case of imperfect markets, the good or service should be provided either by a regulated, privately owned utility or by a government agency. Water and sewage systems, for example, are natural local monopolies. The hospital sector is oligopolistic, if only a few are in driving distance, and in some parts of the country monopolistic. And comparison shopping is impractical in medicine, because even if prices were transparent and publicly available — and they are not in the U.S. — patients would lack the ability to evaluate particular physicians, hospitals and kinds of treatment. That’s why, in the field of medicine, the consumer can never substitute for a combination of public oversight and professional self-regulation.

All of this should be common sense. But the political-intellectual game on the right of devising new vouchers as panaceas for America’s problems continues. While conservatives have proposed housing vouchers as the solution to poverty, there appears to be no voucher that can reduce the poverty of conservative public policy thought.