On "American Horror Story," the racist Madame Delphine had to watch "Roots." Here's more she could've learned from 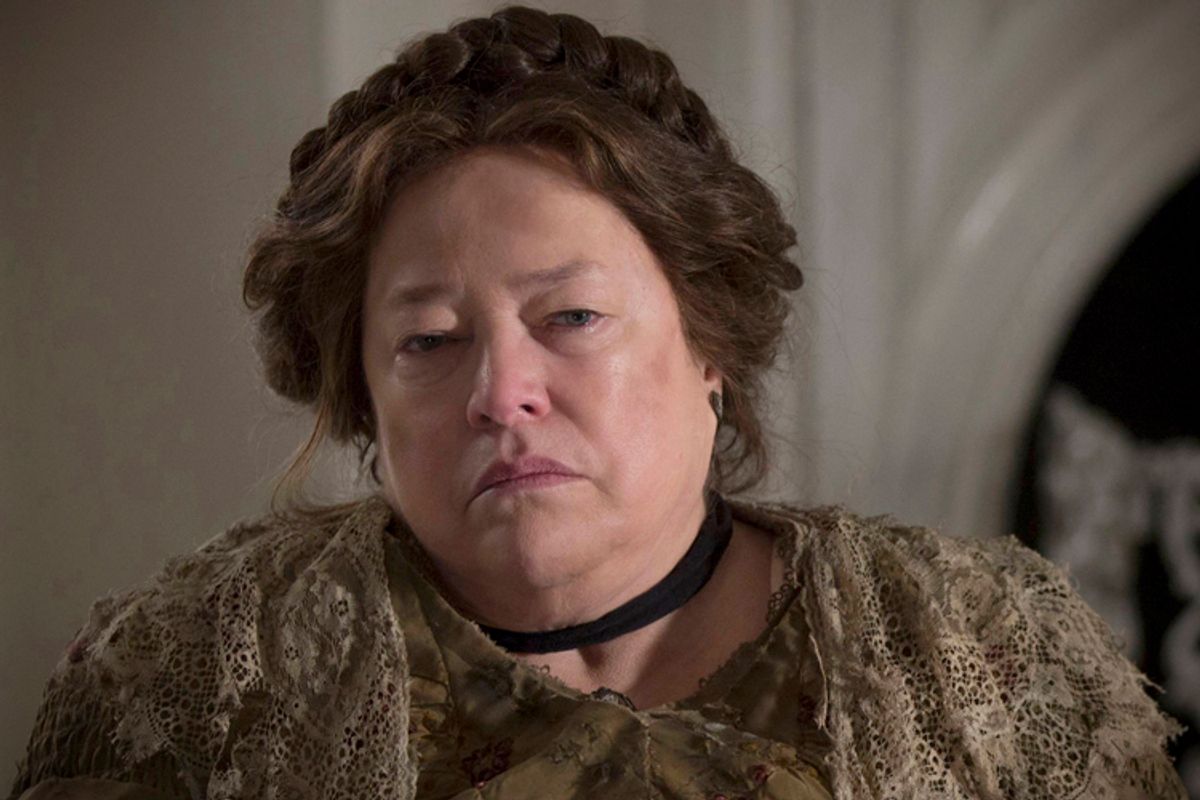 On last night's episode of "American Horror Story: Coven," an aspiring voodoo princess played by Gabourey Sidibe (2009's "Precious") subjects the zombie head of a decapitated slave owner (Kathy Bates) to what the former calls "sensitivity training" and what the latter dubs "fresh hell." "You are ignorant," Queenie (Sidibe) snaps at Bates' vile, sadistic Madame Delphine LaLaurie. "You are not leaving this earth until I educate you about those people you tortured -- my people." She then forces the bitter, old head to watch all eight hours of the award-winning 1977 miniseries "Roots" and its accompanying sequel.

It's a bullshit conceit, of course. It's unlikely that any amount of good television, no matter how compelling or Emmy-garnering, could convert someone with bigotry down to their bones. That said, I'll play along. Admittedly, I don't remember having ever viewed "Roots" in its entirety, certainly not since I was a child and unable to comprehend the miniseries' breadth and implications. Whether or not it offers the best recorded account of blacks' experience in this country, it certainly does not represent the whole story. Were I to be afforded the opportunity to reprogram a racist -- even an undead one -- here is a list of additional pop culture touchstones I would schedule:

"In the Heat of the Night" (1967): As the title indicates, this best picture winner about a murder investigation in a small Mississippi town depicted American racial tensions at their most incendiary. One of the more notable of the so-called race movies of the late '60s, it introduced Sidney Poitier as the iconic Mr. Tibbs, a highly competent homicide detective wrestling with his own bias while partnered with an overtly antagonist white officer.

"The Last Detail" (1973): Brilliantly directed by Hal Ashby from a script by Robert Towne, this film about two Navy men escorting a fellow officer from Virginia to a  Naval prison in New Hampshire is remarkably subtle in dealing with race. Jack Nicholson's Billy "Baddass" Buddusky is all bluster and bravado, but the brooding Richard "Mule" Mulhall (Otis Young) reveals so much about restricted opportunity with his sullen determination.

"All in the Family" (1971)/"The Jeffersons" (1975): The heads of the households in both these sitcoms -- one a spinoff of the other -- were both pretty much overbearing, biased jerks. And, as such, they painted racial hatred as ridiculous, often hilarious, and more about people and stubbornness than any truth.

"The Wiz" (1978): Sidney Lumet's all-black version of "The Wizard of Oz" -- based on the stage musical -- only addresses race in quiet ways. But there are so few depictions of African-Americans in a fantastic context that I put this one on just about any list I make.

"48 Hrs." (1982)/"Beverly Hills Cop" (1984)/"Boomerang" (1992): Eddie Murphy's ascendancy to Hollywood superstar from the '80s into the '90s says an incredible amount about America's changing attitudes toward black men and race. That change is reflected in his own evolving role from co-star to producer and filmmaker, not to mention the changing status of the characters in his films. Let's steer clear of him in a fat suit, though -- just for safety.

"The Cosby Show" (1984): More than simply an assertion of African-American affluence and stability, Bill Cosby's hit sitcom was a carefully crafted picture of a loving, structured, occasionally nuanced family dynamic that had never quite been seen on television prior.

"School Daze" (1988)/"Do the Right Thing" (1989)/"4 Little Girls" (1997)/"When the Levees Break" (2006): "Do the Right Thing" is a way better film, but "School Daze" addresses interesting issues about internal biases created by external forces, i.e., lighter-skinned blacks versus darker. "Do the Right Thing" (1989) -- Fuck it. No matter what you take from it regarding race or bigotry or what have you, it is a phenomenal and unique film by a preeminent filmmaker, white or black. And if anything is likely to spark the humanity in a die-hard bigot, it would be Lee's heart-wrenching documentary work.

"Boycott" (2001): Why not learn about American hero Martin Luther King from one of the finest working actors in America, Jeffrey Wright?

"Jazz" (2001): Much of the oppression and triumph faced by blacks in this country can be traced through its music. Ken Burns' documentary may not tell the complete history, but it is thorough enough and finds both the joy and the genius of blacks and their influence over pop culture. I would follow up with select -- very select -- blocks of music videos from MTV, just to show the continued progression.

"The Wire" (2002): You knew this was coming. I'd maybe stop after the fourth season, but David Simon's epic analysis of the decline of the American city includes plenty of insights about institutionalized racism -- and rightly so. It's also subtle, spectacularly plotted, engrossing and often hilarious. Even while you're reconditioning someone, you want them to have a good time.

Definitely not "Precious" (2009): Though beautifully, moodily shot and including some amazing performances -- so far, it's still Sidibe's best work -- Lee Daniels' film is something of a bummer and overly melodramatic to boot. Any old-timey racist watching this glum heartbreaker of a film would gleefully believe the mountaintop unreachable.

All In The Family American Horror Story: Coven Delphine Lalaurie In The Heat Of The Night Kathy Bates Movies Precious Race Spike Lee The Cosby Show The Jeffersons The Last Detail The Wire Tv