Elizabeth Warren's moral insight: How candid leaders can alter the course of history 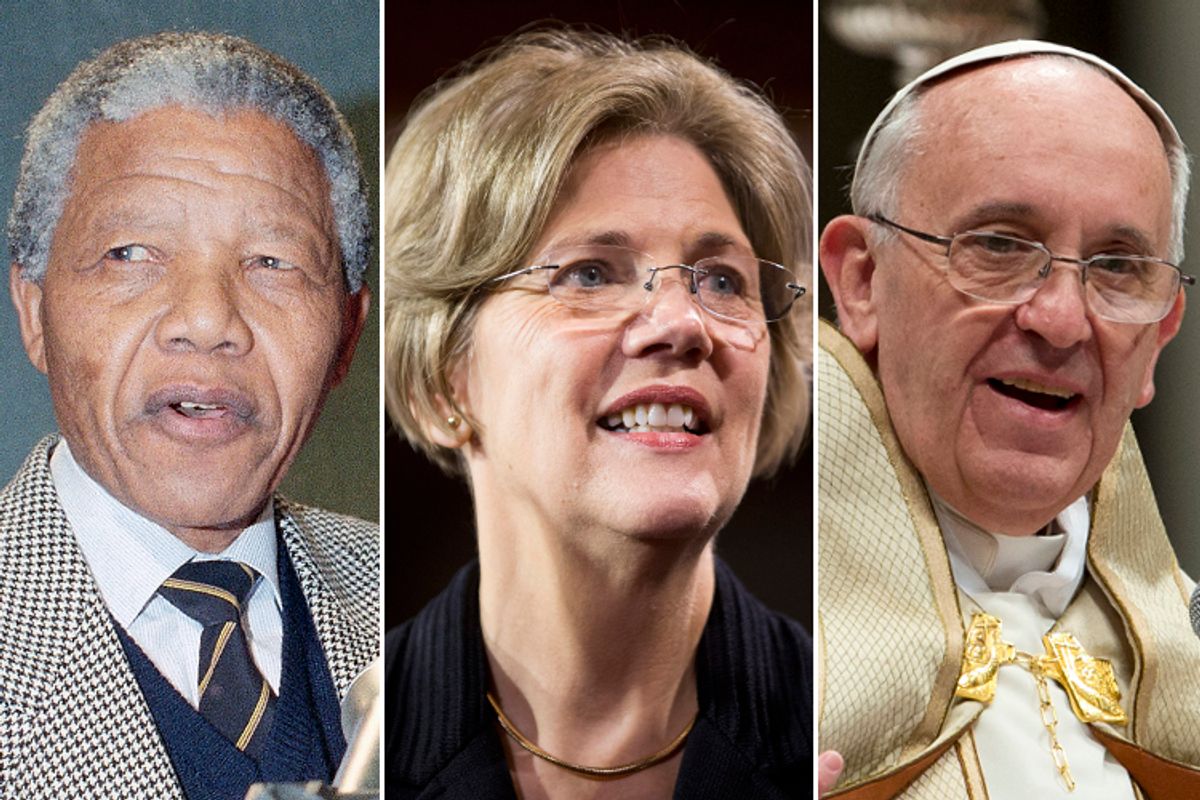 What is America thinking? professional pollsters ask, day by day, week by week. The assumption is that opinions express the “reality” that those in the “bubble” somehow don’t get, because they’re ostensibly out of touch with the “real” America. The underlying premise is that democracy profits from any and all contact with the average citizen -- that precious slice of real America.

But this modern twist on the Jeffersonian principle of listening to the modest, decent, hardworking, informed voter is less meaningful than it ought to be. We live in an America, and in political times, in which almost no attention at all is paid to the quality of information that voters possess. Polls fool us into believing that ideas matter. Polls are a mirage.

Ideas should matter. They should triumph over the blind course set by ideologues and demagogues, and the weak-minded elected officials who rationalize inaction and justify inertia. This explains why those who implicitly sense what American political culture is missing adore Massachusetts Sen. Elizabeth Warren for the clear-headed, no-nonsense critique she provides. “We all do better when we all do better,” her official website reads. The real purpose of republican government must be to help as many people as possible; that is what distinguishes the republican form from the autocratic. (And that, by the way, is the principle that the Affordable Care Act is meant to embody.)

Back in 2010, Warren responded to an interviewer’s question about the impact of the big banks’ outsize misbehavior: “I would have expected the financial crisis to sweep through Wall Street like a hundred-year flood – wiping out old business practices and changing the ecology profoundly. So far, the financial services industry has seemed to treat the crisis like a little rainfall – inconvenient, but no significant changes needed ... Will [the industry] react to all the new cops on the beat just by hiring more lobbyists? Will it continue to spend $1.4 million a day to beat back anything that could mean more accountability and oversight? Or will the financial services industry finally begin to rethink its business models, lobbying approach, and attitude toward the public?” We all know the answer.

Sen. Warren is America’s version of the new, proactive pontiff. As Pope Francis truly understands the call for greater humanity in Jesus’ message, and says so in how he lives, she aims to identify hypocrisy and bad behavior in those who have wielded economic power with shameless disregard for the public interest. But neither of these idea-based public figures is “heroic” – that horribly overused term. They are simply refreshing for their candor.

They symbolize the importance of moral insight. They point us in the direction of fairness by declaring the obvious: that the historical tendency is to accept the powerful as implicitly deserving of their social position. This is the 18th-century notion of deference, which the American Revolution was supposed to have eradicated, but, of course, did not. Society presses (or languishes) on, unable to escape the protective bubble that protects not “the people” but the status quo.

The bubble is why America rests on its laurels, touting its morally ambiguous, yet morally assertive, “exceptionalism,” while appearing, rightly, to the rest of the civilized world as a place where gun violence is epidemic, and Congress lacks the courage to rein in gun manufacturers. In Australia, a nation not unlike the U.S. in its youth-worshiping, beer-guzzling ways, fewer than 50 people were murdered with guns last year; and only four in Japan. But you don’t hear a lot about Australian or Japanese exceptionalism. And check out the violence in the average PG-13 movie. It has been more than a decade since Michael Moore’s “Bowling for Columbine,” a year since the obscenity of Newtown; we don’t have to reproduce the list of murder scenes to project that future historians will be featured on scholarly panels seeking to understand why nothing was done, why entire generations saw the fatal flaw in their society and failed to act morally.

Anyone who professes to care what the founders of our nation believed in – as the U.S. Supreme Court is charged with doing – would be hard-pressed to find in the Federalist Papers any suggestion of institutionalized corruption, à la Citizens United. Powerful people with unlimited capital at their disposal can legitimately buy votes now, and Congresspeople spend expedient hours each day raising money for the next campaign. At what point will we be naming senators as we name stadiums and halftime shows, e.g., “the Exxon-Mobil senator from Mississippi”? We are truly pathetic if we allow ourselves to believe that there is anything “exceptional” about a nation that permits big corporations to underwrite politicians. What would be exceptional is if humane and helpful ideas triumphed over money with some regularity.

Which returns us to the contradiction between the historical appeal to ideas/information and the meek behavior of national politicians in these times of inaction/inertia. It is, sadly, the historical nature of power to triumph over the individual mind. For all but an independent minority, most people find it easier to accommodate themselves to rules than to spend their lives fighting them. They identify with a community, they belong to something larger than the self, and they are swayed in their voting choices by the corporate, or collective, decision.

It is in this way that power is concentrated and the individual repressed. For centuries, custom obliged the majority to marry, for the female to take her husband’s name, sacrificing individual identity to preserve a familiar and comfortable social order. In the early 20th century, women who married foreign men had to surrender their American citizenship. We would not tolerate such demeaning and dismissive political bias today. Yet our politics operates by a similar principle in ignoring and dismissing the mostly invisible people who are most affected by official protection of entrenched power.

Acknowledging social tendencies, we better understand why the rich get richer – and why they seem to deserve it if one listens to conservative voices – and why people actually believe, though the policy has been repeatedly tried and repeatedly fails, that to reward the rich and powerful is to reward the “job creators.” Opposing social inertia is hard work.

So, what is the future of the “informed voter”? Thomas Jefferson was far too optimistic when he wrote to an ally during his first term as president: “I am willing to hope, as long as anybody will hope with me ... and that at every vibration between the points of liberty and despotism, something will be gained for the former. As men become better informed, their rulers must respect them the more.” That is decidedly not the case today.

Nelson Mandela, prisoner of conscience and later Nobel Peace Prize winner, defied an entrenched system of segregation. He said, quintessentially: “To be free is not merely to cast off one’s chains, but to live in a way that respects and enhances the freedom of others.” At another time he said of himself: “I like friends who have independent minds because they tend to make you see problems from all angles.” These are the watchwords of the enlightened individual, who knows that liberty is not the freedom to trample on others; liberty commands us to show concern for the general welfare.

Not that they are all comparable to (or on the same moral par with) one another, but the Elizabeth Warrens and Pope Francises and Nelson Mandelas of the world do have something in common: They shake things up, and are credited for doing so. Mandela’s life shows that individuals, at times, do alter the course of history. And for that we must feel gratified. But their lives show, too, that those in power do not yield just because someone has pointed out the institutionalized unfairness of the status quo.

The word “oversight” has two distinctly different meanings: obliviousness or failure to notice what is happening; or careful, watchful management. The satisfying, but simpleminded, consensus that the social order and power structure in America are fine as is, displays the former definition of “oversight” as well as ignorance of the present’s place in history. The consumer financial protection agency that Sen. Warren helped to establish encompasses the latter definition; by talking back to the banking establishment it is designed to do precisely what government should do: conduct oversight of those businesses that operate by inertia, and on the basis of motives other than those that serve the interests of the many. Which is how we should define democracy.