I watched the "Scandal" midseason finale without turning on the TV

Here's what I think happened, based entirely on Twitter 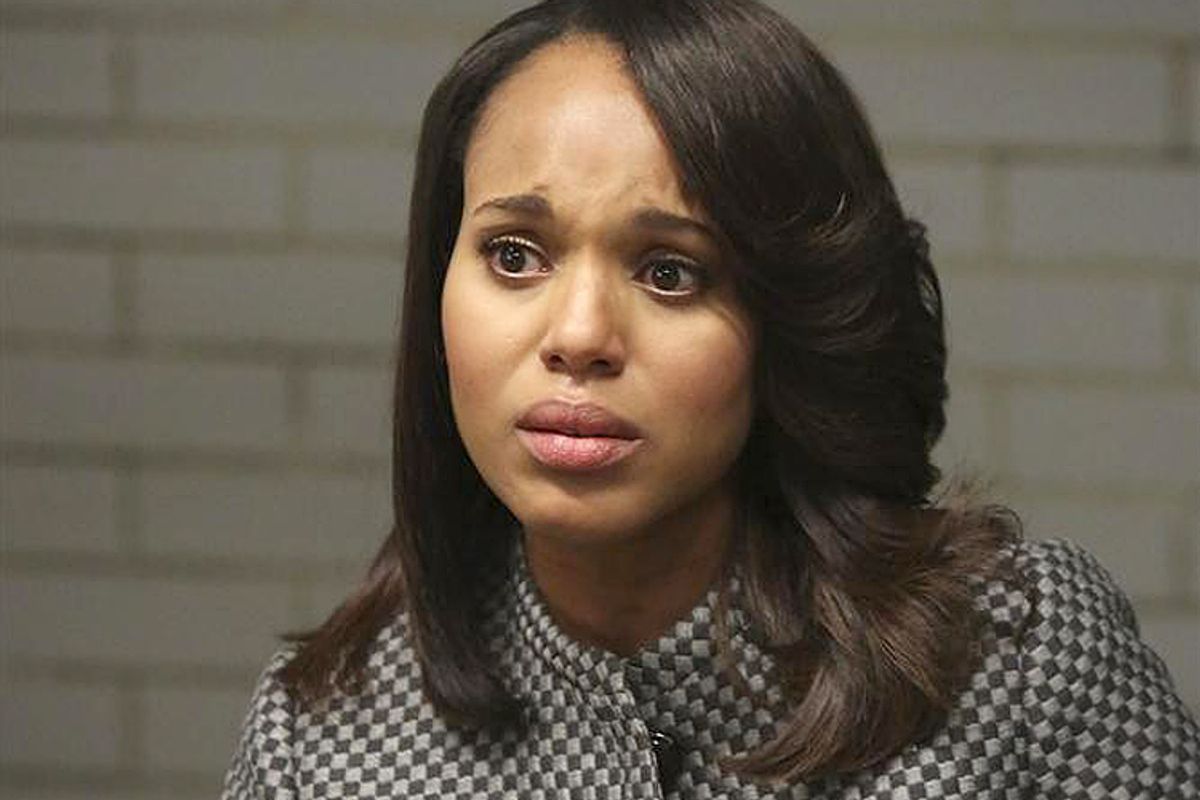 As I've said before, I'm not much of a "Scandal" fan. But I am fascinated by the degree to which its champions -- excuse me, gladiators -- actors and creators engage with the show on Twitter. I've opted not to actually watch the much-hyped, mid-season finale but, instead, attempt to recap it purely based on what I've read on Twitter during and directly following the broadcast (a form previously explored by Slate's Willa Paskin). Just to demonstrate the show's ubiquity, let's begin with a "previously seen on" courtesy of HBO's own critical darling:

This episode  -- I suspect -- opened with a flashback to a moment preceding the bloody final scene of last week's episode, when the camera peeled back revealing that Vice President Sally Langston had murdered her in-the-closet husband for sleeping with the husband of openly gay White House Chief of Staff Cyrus Beene. Tonight, we see Langston, an outspoken member of the religious right, call hubby out for his godless and potentially politically damaging behavior before plunging a White House letter opener between a randomly chosen pairing of vertebrae. Twitter's like CliffsNotes for critics. This'll be easy.

Wait. Before she killed him, he threatened to tell on her about something. Considering that, on this show, even the president of the United States has committed murder, it's difficult to keep up with everyone's nefarious deeds. Anyway, moving on ...

There is a wildly edited, fast-paced sequence in which Huck tries to locate Quinn using the tiny tracking device he hid in one of the teeth he did not remove while torturing her last week. Intercut this with Olivia Pope, smartly dressed -- something form-fitting and grey that suggests she means business. She calls her gladiators into their shabby chic conference room for the snappy debriefing that comes early in every episode. This time it's personal -- as it has been for some time, actually. Having surmised last week during one of the many irritating replays of Michael Jackson's "Ben" that her mother might have actually been a terrorist, Pope charges her employees with divining the specific nature of Maya's crime.

Roughly 12 minutes in, Twitter sentiment begins to echo my own:

Panicked and fearing the wrath of the almighty, Sally Langston calls the only individual who can aid her. Cyrus swoops into the veep's office wearing a dark cloak and wielding a pitchfork. He reveals his horns ...

... and promptly makes Sally's husband's body disappear in a puff of brimstone like Nightcrawler.

Meanwhile, Jake shows up at Olivia's apartment. She was just at her office. But I'm betting the following exchange takes place at her apartment because people are always showing up at her apartment unannounced just as she is settling into a glass of red wine and her own tears. Olivia sobers up long enough to chastise Jake for doing something besides being handsome like attempting to kill her father or whatever doomed, paramilitary stunt he and Huck tried to pull last week. Huck jumps to Jake's defense -- OK, so maybe this conversation happens at the office -- and Jake emphatically explains to Olivia that, father or not, Rowan Pope is a very dangerous man who needs to be put down.

Elsewhere in fictional Washington, D.C., where no one in government actually runs the government, Rowan has a sit-down with the president. The oft-clueless commander-in-chief demands to know what is happening and finally gets around to asking the head of B613 for his daughter's hand in adultery. Rowan Pope then administers Fitz a stern talking-to that skews a tad lewd and puts "Daddy Pope" in Twitter's trending box just below #KimJungUn.

From here on, spirited confrontations abound. The president's wife and merciless co-conspirator Mellie pulls the vice president aside and demands that she not run against Fitz in the upcoming election, sneering, "We know where the body is buried," or something threatening like that. Emotionally destroyed by his own husband's callousness, James runs to David Rosen, the most useless U.S. district attorney in fictional legal history, with tales of Cyrus' crimes. "My husband whored me out to the vice president's husband for political leverage," or something convoluted like that.

Then things get even crazier as Quinn shows up at the digs of her former employer, Olivia Pope without underwear ...

... or wearing her B613 boyfriend's boxer briefs instead of her own. Either way, Pope's associates smell something fishy. Huck threatens to kill her. Twitter screams at him to go for it, but he doesn't out of respect for Olivia.

As is typical of "Scandal" -- all the more for this being a finale of sorts -- the hour ends in a flurry of predictably shocking developments. Cyrus and James make up. Considering the offenses counted against him, it only makes sense that Cyrus would bribe James into forgiving him by offering the wounded writer the position of White House press secretary. I think he'll make a great one, don't you? At least until the photos of him screwing the vice president's dead husband surface.

Rowan quits B613 in order to better dote on his daughter. Jake resolves to dote on Olivia less and assumes the position vacated by Rowan. Quinn earns her stripes and becomes the shadow agency's full-fledged recruit as well. Sally Langston resolves to still run against the president. And there is terror in the skies as Olivia Pope's terrorist mother reverts to form and hijacks an airplane. By the end of the episode she is lurking outside the White House. I cannot suss from the Twitter clamor and clutter just how this last part went down, but I can say this with certaintys...

(So, how'd I do? On second thought, don't tell me. Kudos to Shonda Rhimes and the "Scandal" writers for making all this madness jibe. I couldn't put it together even with help from, basically, everyone.)