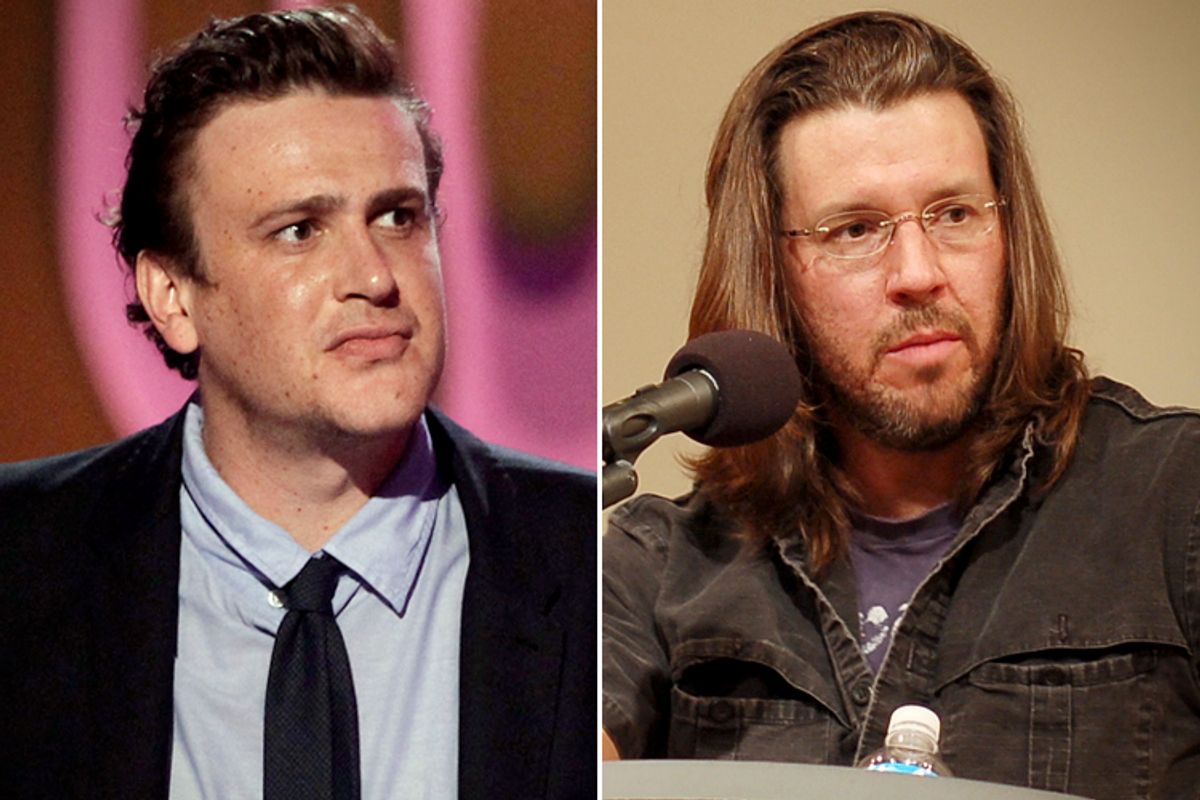 First of all, he's a decent physical match for Wallace (though as Flavorwire pointed out, he'll need to "rock a bandana like this"). More important, though, Segel's sensitive-bro persona is actually very close to Wallace's.

Segel got famous playing sweet men in Judd Apatow projects (except when, more entertainingly, he played sleazy men in Judd Apatow projects). He's a nice guy who sings about losing the girl, but he still lives in an Apatovian man's world -- one where women are hot and men are doofuses, your best friends are other guys, and you get advice from Paul Rudd. The quintessential Segel character is a squishy-centered bro, but a bro nonetheless.

What Wallace's center was like is a matter of much debate -- but his self-conscious, constantly qualifying style was certainly sensitive in its way, and he has in death been perceived as a veritable icon of a certain kind of sensitivity (on which, as he might say, more later). And yet he was, in some crucial ways, a bro. He claimed repeatedly to have been "a jock" growing up -- the fact that he even used the word "jock" is instructive. He reportedly enjoyed "audience pussy." Even some of his best nonfiction has elements we would now call bro-y -- the fascination with TV, sports and middle America; the tilt toward conservatism; the famous slangy bits as though to compensate for erudition. Here he is on horse anatomy in "Ticket to the Fair":

A sudden clattering spray-sound like somebody hosing down siding turns out to be a glossy dun stallion peeing. He's at the back of his stall getting combed, and the door is wide open. The stream of pee is an inch in diameter and throws up dust and hay and it looks like even chips of wood from the floor. A stallion is a male horse. We hunker down and have a look upward, and suddenly for the first time I understand a certain expression describing certain human males, an expression I'd heard but never quite understood till now.

A nerd-bro, but definitely a bro. In fact, the kind of vexed bro-ness displayed above is exactly the kind Segel would be adept at portraying. Or here he is on a favorite subject, tennis:

[G]iven Agassi’s position and world-class quickness, Federer had to send that ball down a two-inch pipe of space in order to pass him, which he did, moving backwards, with no setup time and none of his weight behind the shot. It was impossible. It was like something out of “The Matrix.” I don’t know what-all sounds were involved, but my spouse says she hurried in and there was popcorn all over the couch and I was down on one knee and my eyeballs looked like novelty-shop eyeballs.

The passage is well-done and funny and begins to set up some smart observations about sports and the body that Wallace will later flesh out. It also describes a scene that could be part of a beer commercial. Relatedly, here he is on TV:

Television's greatest minute-by-minute appeal is that it engages without demanding. One can rest while undergoing stimulation. Receive without giving. In this respect, television resembles certain other things one might call Special Treats (e.g. candy, liquor), i.e. treats that are basically fun and fine in small amounts but bad for us in large amounts and really bad for us if consumed in the massive regular amounts reserved for nutritive staples. One can only guess at what volume of gin or poundage of Toblerone six hours of Special Treat a day would convert to.

Wallace's critiques of television were personal -- he loved television and was disturbed by his love for it. And it's easy to imagine Jason Segel curled up with all three of Wallace's bad-for-you treats because he did it in "Forgetting Sarah Marshall." Just swap the Toblerone for a giant bowl of cereal -- the bro-child at rest.

None of this is to slam Wallace. He was a troubled man who may well have treated some of the women in his life badly, but I use the term "bro" here not as shorthand for misogyny. As Katie McDonough has illustrated, bro (or dudebro in her formulation) need not be a purely negative term. It can describe the performance of a certain kind of masculinity, a masculinity a little more boyish than manly, more baseball cap than business suit. This kind of masculinity often gets overlooked in Wallace in favor of his more philosophical pronouncements and nerdish footnotes, but it's there, and it's crucial, as the question of what it means to really grow up in America is central to a lot of his writing. Segel may not have been a jock in high school, but his characters embrace this kind of masculinity too.

I suspect, though, that some of the Segel outrage stems less from a perceived mismatch between Segel's affect and Wallace's, but from the feeling that an actor now known for singing with Muppets shouldn't play someone as serious as David Foster Wallace. But anyone who's read "Shipping Out" (aka "A Supposedly Fun Thing I'll Never Do Again") knows that Wallace could be hilarious, perhaps especially when he was being serious. More important, I'm far from the first to note that Wallace's elevation in death to the status of, in Jonathan Franzen's words, a "benignant and morally clairvoyant artist/saint" oversimplifies him and his legacy -- the most morally exacting of his writing, paradoxically, would argue against such hero worship. The idea that only an actor with enormous gravitas could play the Great Man makes both more and less of Wallace than he was.

So I welcome the chance to see Segel don the bandanna. It's a hard job -- not least because Wallace fans will surely critique his every move -- but he's as qualified to do it as anyone.

Correction: An earlier version of this story misstated the source of the phrase "audience pussy." According to D.T. Max's "Every Love Story Is a Ghost Story," the term was used by Mary Karr to describe Wallace's liaisons with fans.