Think country is all bland and conservative? Think again! 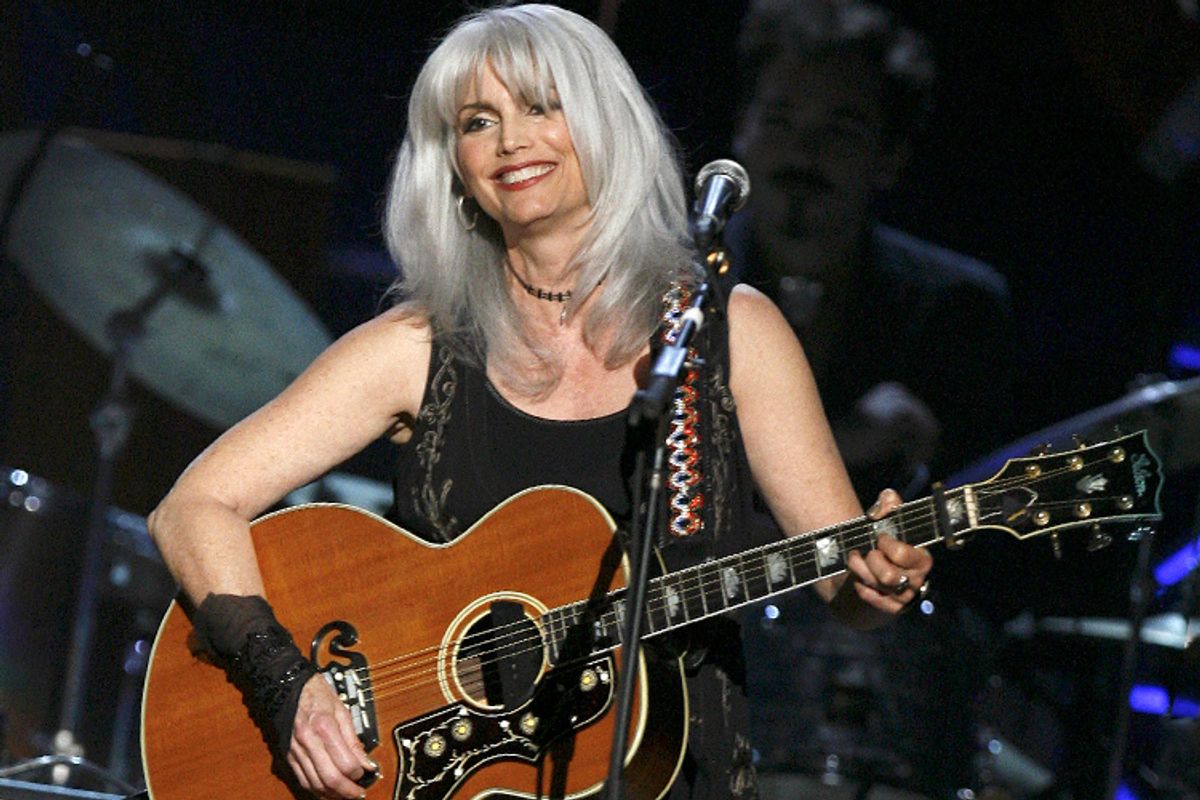 Country music is bland, conservative music for aging white fuddy-duddies. Or so its detractors claim. In fact, country has, from its inception, been musically omnivorous, gulping down blues, jazz, soul, rock, hip hop and anything else that happened to be sitting nearby on the radio dial. As a result, there's lots of country to listen to for folks who don't like country.

Hillbilly music as a genre was originally constructed in opposition to so-called "race music" — which is to say, it was specifically designed for white people. Segregated marketing has, painfully and shamefully, made country music what it is to no small extent. This glorious meeting between early country superstar Jimmie Rodgers and Louis Armstrong is a rebuke to that segregation. The lyrics, about police harassment, deliberately connect the experience of poor whites and blacks, as Rodgers' yodeling trades easy phrases with Armstrong's swinging trumpet, and Lil Hardin (Armstrong's wife) plays some New Orleans barrelhouse on the piano. Rodgers' collaboration with blues guitarist Clifford Gibson is also great.

Western swing was swing band music played by rural white folks with some country instrumentation. Bob Wills was the most successful and influential performer of the genre, and his recordings are a wonder, veering from straight swing tunes to traditional folk tunes to pop and everything in between. This number, made for radio transcription, is one of his deepest blues, featuring the gut-bucket distorted electric guitar of the amazing Lester "Junior" Barnard. Also taking the spotlight are Millard Kelso on piano, the great vocalist Tommy Duncan, Joe Holley on fiddle, Tiny Moore on the electric mandolin, Herb Remington on steel guitar, and Bob Wills himself, introducing each performer and shouting out the "aaaahhhhsss."

Kay Starr was a pop and jazz singer who frequently worked in the country idiom; she recorded a number of excellent duets with Tennessee Ernie Ford. Lester Young was a big fan, and Billie Holiday called her "the only white woman who could sing the blues" — though Starr's heritage was actually more Native American than European. Listening to this track you can see why Young and Holiday were so wowed;  if Starr swung much harder she'd fracture that floor she's singing about. Her drive and rhythm seems work a bridge between the hiccupping cool of bebop and the hiccupping cool of rockabilly; elegantly tough and effortlessly hip. (Johnny Horton's version of the song is also worth checking out.)

Bluegrass is often thought of as traditional music. In fact, though, it's a pop music form, which coalesced in the 1940s from elements of old timey, blues and jazz. Mandolinist Bill Monroe, the most influential creator of the genre, was a synthesizer and an innovator, and his catalog is filled with experiments and outright gimmicks — including his rockabilly uptempo version of his own song, "Blue Moon of Kentucky," inspired by Elvis' massive hit cover. "Scotland," from 1958, is another superb novelty; a tribute to Monroe's Scottish heritage, with Kenny Baker and Bobby Hicks' twin fiddles mimicking the keening of bagpipes. The original doesn't appear to be on the Web, but there is this delightful 1991 video of Monroe dancing to the tune with Emmylou Harris.

Ray Charles recorded a lot of country; his 1962 album "Modern Sounds in Country and Western Music"was the first million-selling country recording. Alas, though it's heresy to say it, "Modern Sounds" is tepid, filled with by-the-numbers pop arrangements and a general air of deadening reverence. Not so Charles' first foray into country; his version of Hank Snow's "I'm Movin' On" weds the shoulder-shrugging beat to call-and-response gospel to create hard-driving, authoritative soul.

Elvis had the first hit with this song, but Jackson's is the definitive version. Her growl would carry the track by itself — "yeah, yeah" has never been said with such knowingness. What Adam or Samson wouldn't be eager to acquiesce after hearing that? And yet, even so, Jackson's just about upstaged by, of all people, Roy Clark, whose unbelievable guitar solo goes from bluegrass to Chuck Berry and back again. Though I pledge my love to this version, the live performance on the Smothers Brothers is also great, with Jackson dancing, some double neck guitar played by Joe Maphis (I believe?), and, to top it off, a trumpet solo.

Johnny Cash and Bob Dylan, "Girl From the North Country," 1969

Johnny Cash's late-career collaboration with Rick Rubin, and particularly his version of NIN's "Hurt," is often presented as a mainstream apotheosis. But as this famous track shows, Cash dabbled in crossovers of one sort or another throughout his career. The stripped-down backing, with just guitars, nicely highlights Cash and Dylan's different but complementary ragged singing.

The Flatlanders, "Keeper of the Mountain," 1972

In California, the Eagles made hippie country soft rock into a repulsively commercial juggernaut. In Texas at about the same time, the Flatlanders proved you could make good music from the same elements while having absolutely nobody listen to you. Jimmie Dale Gilmore, Joe Ely, and Butch Hancock's initial recordings as the Flatlanders disappeared almost instantly, only to be recovered when the performers went on to (relative) solo success. Those early tracks are still perfect, though. "Keeper of the Mountain," featuring Gilmore's delicately wavering vocals, is my favorite: shimmering, soulful and spaced-out.

Willie Nelson's eccentric phrasing and rhythmic sense has always had as much to do with classic pop performers like Bing Crosby and Frank Sinatra as with country forbearers like Lefty Frizzell. The 1978 megahit "Stardust," with production and arrangements by Booker T. Jones, illustrated that at album length. Every track is wonderful, but "September Song" remains my favorite. Nelson's vocals are taken at such a leisurely pace that they end up more silence than singing. You can feel the seasons changing between each word; a lovely way to get old.

There are lots of successful country-guitar rock fusions from the rock side: Georgia Satellites to Skynyrd and on and on. Dwight Yoakam's "Long White Cadillac" is maybe the best crossover from country. The music is solid strutting cock rock, but what really makes the track is Yoakam's vocals, half Hank Williams yodel, half Howlin' Wolf howl.

Rockabilly is a resource that country's largely abandoned over the last few decades. As a result, Carlene Carter's jittery swagger feels like it has as much to do with pop punk's retro rock as with the music of her putative peers, be they Garth Brooks, Lyle Lovett or k.d. lang. There aren't many pop performers in any genre, though, who have a voice like Carter's, with that rough burr lodged in her throat. "Every Little Thing" is one of her best, especially with the goofy retro-go-go video. All her music is worth seeking out, though, including her 2008 effort "Stronger."

Putting country and hip hop together is not necessarily a great idea; Big and Rich's "Save a Horse Ride a Cowboy," for example, is a callow dud. Bubba Sparxxx, though, manages to get the tricky formula right a surprising percentage of the time, especially on his second album, "Deliverance." Sparxxx's laconic, Southern accented rapping is part of the reason for the success. Even more credit is due to the genius that is Timbaland; on "Comin' Round" the producer samples The Yonder Mountain String Band, seamlessly integrating the rhythmic drive of bluegrass with his own idiosyncratic beats.

Since she began her career with Gram Parsons, Emmylou Harris has always straddled country and the hippie end of folk. The resurgence of folk as a major indie-pop influence makes this collaboration a natural; it's easily the best track on her album "Hard Bargain," and, indeed, a highlight of a career with no shortage of them. Her aching singing nestles up against Ben Knox Miller's almost too-fey vocals, creating a sublime ping-pong of bitter and sweet. I wish Harris would do a whole album of indie-rock collaborations; I can't be the only person who wants to hear her duet with Antony and the Johnsons.

I like Justin's music significantly more than that of his more famous father. His 2012 album "Nothing's Gonna Change the Way I Feel About You Now" mixes country with Muscle Shoals Southern Soul. Earle's no soul singer himself, but his laid back, semi-slurred vocals work surprisingly well with the song's lyrical message of failure. The woman in question turns into the soul tradition itself, spurning him despite his best efforts. What he ends up with is a mismatched, hybrid heartache —  as good a definition of country as any.