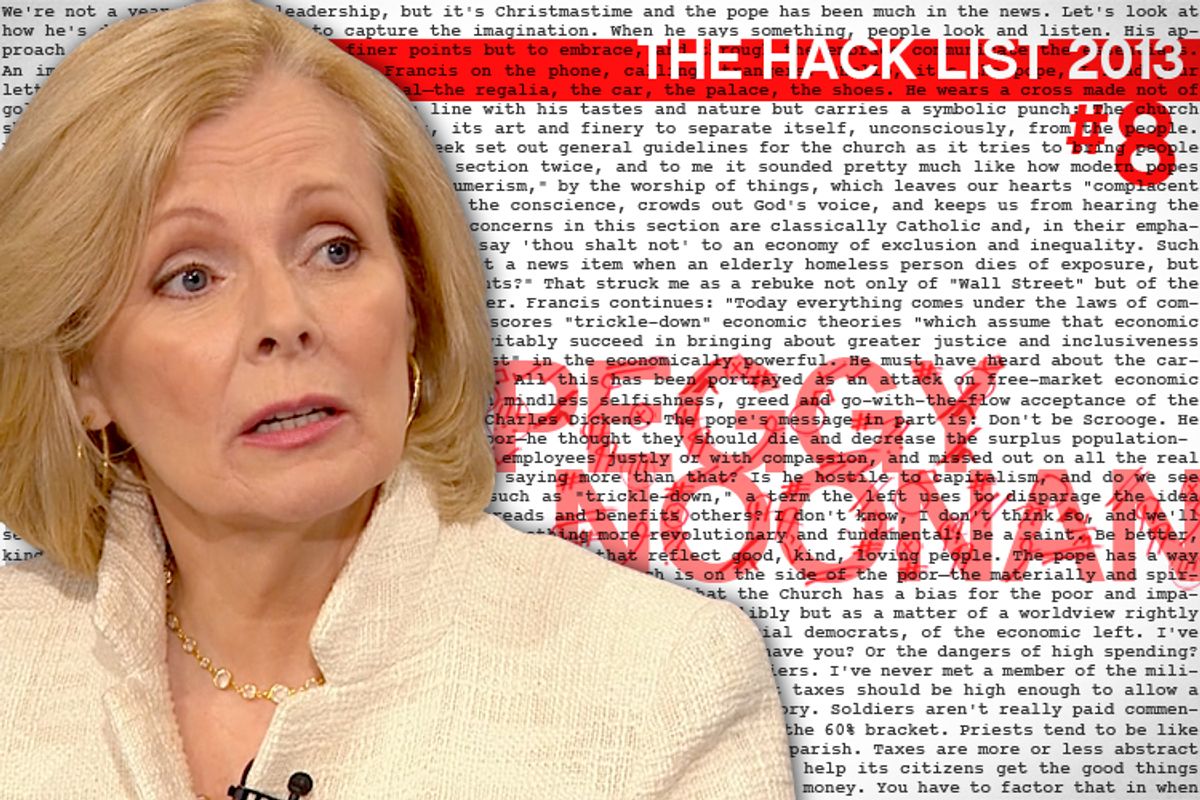 Salon is running its annual Hack List this week. Also check out "winners" number 10 and 9.

Sometimes, the old things, the things you thought gone forever, come roaring back, and you notice them again.

It is early evening in Manhattan on Flag Day, and I'm walking along on Park Avenue just north of 59th Street, a street I know well, a street I never go south of, when I see something unusual. A person. A human person, a man, short, with dark skin and hair. He is, I think, Latin American, perhaps a Mexican. He is sitting in a strange box that contains hundreds of gaudy candies, and inside the box there is even a small refrigerator containing soft drinks. Beside the candy there were magazines of all varieties, and below the magazines were these funny stacks of paper. We called them newspapers. The box, I immediately thought, was America.

In the grand American tradition, the man was selling all of these things, as all immigrants have, as we once hoped -- no, knew, in our bones -- they always would. Now, we're not so certain. Now we don't know who will sell us candy and Pepsi Maxx on 59th Street, tomorrow.

I bought a newspaper from the man. The Wall Street Journal. I opened the Wall Street Journal and I read it. There, in the middle, or at the end of the first section, was a newspaper opinion column. The column said, "Hey, read me!" So I did. It was by Peggy Noonan, who used to write words for a president. Now she writes words for everyone who buys this newspaper. Peggy Noonan had a lot of things to say, about how the president is weak and uncertain, how Chris Christie is good at playing a game, and knows it's a game, and is a winner, and how amazing it is that Peggy Noonan can ride on an airplane and type thoughts about JFK on a computer machine. Peggy Noonan is on airplanes, and in airports, a lot, in real life and in her columns.

Was Peggy Noonan ever a new person? Logic and science say yes. I'm not so sure.

The Elders still want to know what Peggy Noonan is thinking. They look at her, and they see wisdom. An ability to connect to America, to channel America. Peggy Noonan's problem right now is that people think she is insightful. They think she's plugged in, aware of reality. They think she has a firm grasp on the contours of our politics, a serious take on the state of the two parties. I fear that she doesn't.

Ms. Noonan doesn't know how things work. She doesn't know that signs on lawns aren't the same thing as scientific polls. She doesn't understand which side of the political spectrum supports deficit-funded government intervention to create jobs. She looks at Pittsburgh, at its airport, and she says, "Hey, this is a depressing place." She doesn't know that American cities, not Washington and New York but the shorter, more honest cities in the interior, have neighborhoods, and hotels even, that aren't by the airport. It's outside of her experience. She lives in words, in parenthetical clauses within sentences. She says, "America is in line at the airport." America says, most of us only ever fly over the holidays.

That's why, I think, so many people -- I include literally everyone I know, and have ever met, and many others as well -- fear that Peggy Noonan is not going to go away.

Stop reading this and ask whoever's nearby, "Do you find yourself worrying about Peggy Noonan's continued employment and omnipresence on the Sunday morning political talk shows?" I do not think you are going to get, "No."

There's a woman on a porch in eastern Ohio, and she has a dog, and diabetes, and a family, and seven grandchildren. The part of Ohio she lives in is vague, like so much of America, in Peggy Noonan's imagination. There's a swing on the porch, and a tree also has a swing, made of a tire. Americans used to swing freely on tires, and now we cannot even keep the lights on in Detroit, once such a grand American city, full of Big-ness and New-ness. Now this woman sees the tire swing, and she's thinking, "Is that swing a metaphor?"

She sees this Peggy Noonan on her television, on "Face the Nation," and she thinks, "That seems like a nice woman." But then Peggy Noonan starts describing an imaginary woman on a porch in Ohio. The woman hears Peggy Noonan praise this woman's common sense, and faith, and modest American wisdom. She thinks, "This sounds very condescending. Peggy Noonan knows next to nothing about the interior lives of Americans outside of her rarefied social and professional spheres."

People are angry with Peggy Noonan. They're mad. Most of all, they're disappointed. They're tired. Reading Peggy Noonan, and seeing her on television every Sunday, the Lord's Day, when Americans, young and old, rich and poor, used to go to church, with their families, now just makes Americans feel exhausted.

But they're optimistic. Americans are always optimistic They know Peggy Noonan will eventually retire.

Here I will say something harsh, and it's connected to the thing about words but also images, and the combination of words and moving images.

Peggy Noonan spent a lot of time living in a house -- a cabin, perhaps, or maybe a modest split-level ranch, with a golden retriever tied up out back -- called Ronald Reagan's brain. And it was comfortable in that house, the furniture was lived-in and the television only played "F Troop" and every night children rang the doorbell to trick-or-treat or sing Christmas carols, and it wasn't long before Peggy Noonan just stopped leaving that house.

Now, though, the house is cluttered, and it needs to be painted, and architecturally it no longer makes sense in the neighborhood.

She says, "When Reagan came into a room, people stood: America just walked in."

Peggy Noonan's problem now is that she is still in Ronald Reagan's brain-house.

But America is out here. America is saying, "Hey, look at us, we aren't in that house, and we need people who have important opinion manufacturing jobs to not live in strange fantasy Reagan brain houses."

America is saying, "What are you even talking about, ever?"

Can she hear us?