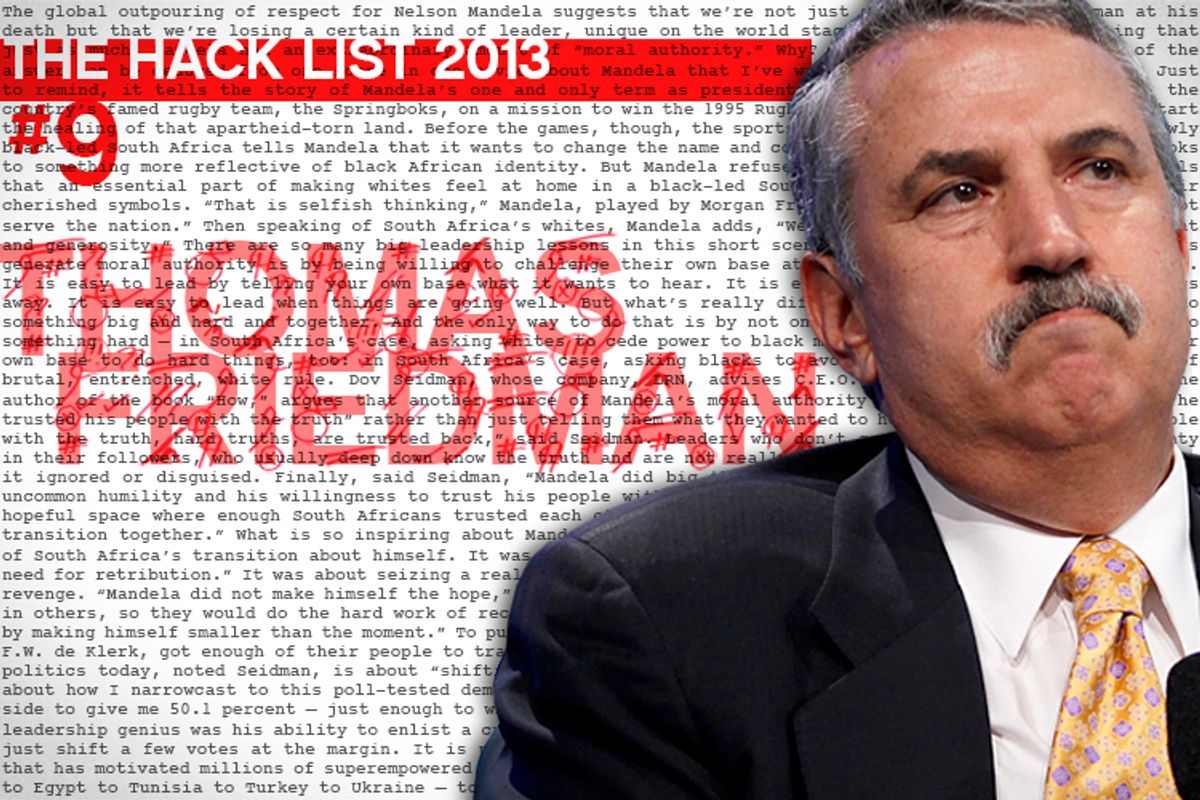 A Visit to Friedman World

I was at a conference in Brussels last week and having trouble with my column. Thomas Friedman hadn't changed as a writer or a human being for many years, and I'd written about him 100 times before. I took a walk down to Cinquantenaire Park to get some fresh air and clear my head. As I left the park, I stopped in a small cafe to order a coffee.

I happened to notice a young Palestinian man working behind the counter. When I ordered my coffee, he realized that I was American. "Ah, like Thomas Friedman," he said. "Friedman, the great New York Times columnist who understands the needs of and challenges facing people like me, working-class Palestinians living in the European Union, because of how often he travels the world and how many brief but illuminating conversations he has with service industry employees. We are all grateful to be material for his columns and books," he said, standing in for all people like him, by which I mean most foreign brown people.

As I wrote down what he said to use it in my column, it struck me that the world is changing. The world used to be flat. Now, everyone I talk to, everywhere I go, tells me something is bending the world into a new shape. This 4G, 401(k) world is getting rounded. That scares a lot of people. But it doesn't scare Thomas Friedman. Because while some old media dinosaurs are going extinct thanks to the asteroid of globalization and the giant dust plume of hyperconnectivity, Friedman is a cockroach. A cockroach made of stone. A cockroach made of stone that lives in The Cloud.

Thomas Friedman is an app. People who read Thomas Friedman, like President Obama and other rich Americans, are like teens using apps on their iPhones. Only this app doesn't take a selfie, it takes a they-mie. See, Friedman's a mirror, and like a mirror, he reflects. I call the people he's reflecting "Friedman World." In Friedman World, America is always saving Muslims from themselves by bombing them and columnists never learn any lessons from their worst mistakes. In Friedman World, the destabilization of America's former middle class is actually an opportunity for formerly employed people to work on building their branded reputations.

I wish Thomas Friedman, House Republicans and Iran President Hassan Rouhani could all get together in a room and listen to the words of Winston Churchill, who once said, "The Hun is always at your neck or at your feet." He was talking about Germans, but the Hun of today is runaway entitlement spending. Entitlement spending is also an unspecified number of cans. And young people are "the ones who will really get hit by all the cans we’re kicking down the road." In Friedman World, cans that were kicked down a road somehow hit you when you reach them.

If we taught the citizens of Friedman World to code, would they create an Instagram or an Angry Birds? That's the question that could decide the fate of the entire Middle East.

When I was in Singapore, I talked to hundreds of Asian college students, business people and diplomats, and while none of them said this to me, exactly, it's basically my thesis and so I'm going to put it in quotation marks as a sort of "distillation" of things I probably was told by people: "Is everything going all right over there in America? How could the people who gave us Amazon, Apple, Microsoft, IBM, H.P. and Google also have so many people, many of them in positions of authority, who take a clown like Thomas Friedman seriously? Most of his columns are just nonsensical buzzwords he's been repeating for literally 10 years and his foreign policy analysis is usually either incredibly facile or actively offensive to Arabs and Muslims. It's actually terrifying how influential he is. Like it legitimately makes me despair of anything improving anywhere in the world for anyone but the super-rich. Also there is probably some Times rule about not putting 'distilled' quotes in quotation marks, right?"

When I heard that -- or rather when I didn't hear it but when I wrote it, just now -- I thought "we're gonna need a bigger boat." And that boat better have Wi-Fi. Because Friedman World may be flat, but it doesn't have an end.