How HBO lost its dominance

The network of "Getting On" and "Hello Ladies" may offer some pleasure, but it's no longer producing appointment TV 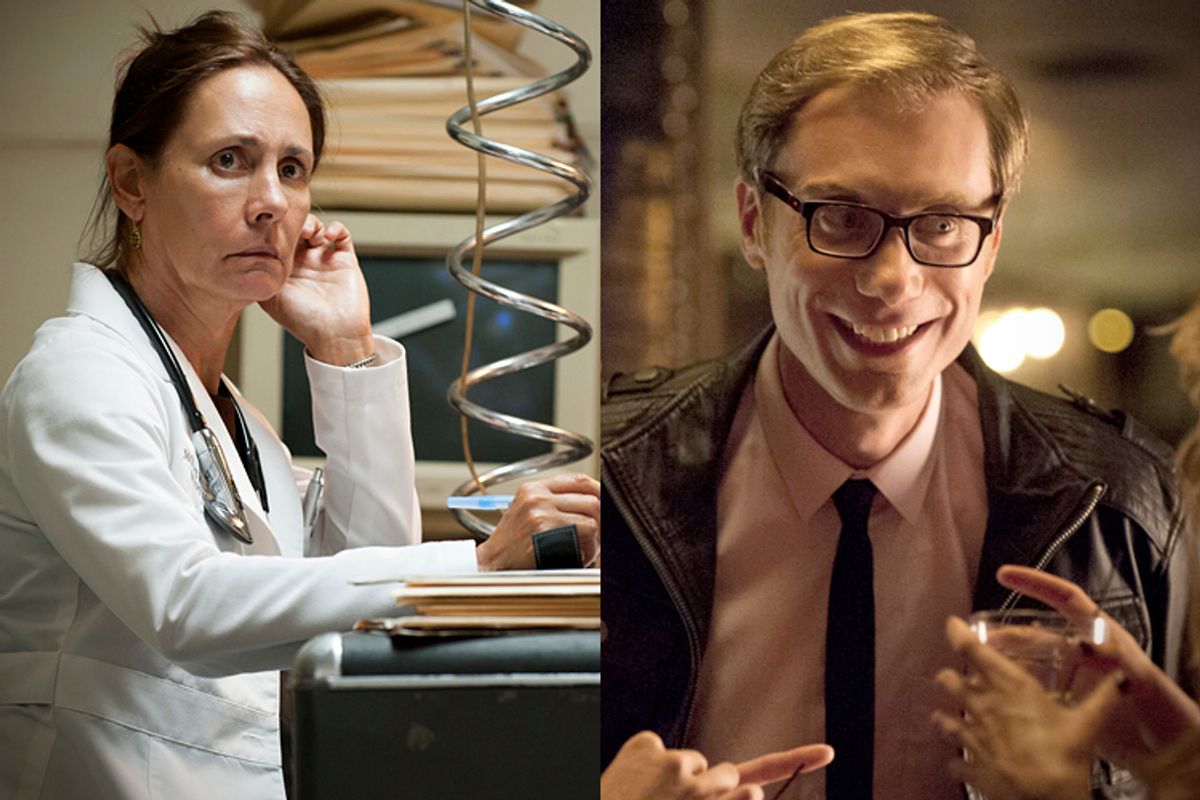 Laurie Metcalf in "Getting On," Stephen Merchant in "Hello Ladies" (HBO)
--

As I was grinning through last night's "Getting On," I realized -- with a twinge of disappointment and subsequently nostalgia -- that I probably wouldn't be heatedly discussing this episode around any real or proverbial water cooler come the morning. "Getting On" is muted, frequently scatological, occasionally poignant and, for whatever reason, decidedly not appointment television. Unlike "The Sopranos," "Sex and the City" or "The Wire," "Getting On" is unlikely to become the subject of national debate any time in the next few, foreseeable news cycles, despite the program's rather timely focus on healthcare. Like its half-hour counterparts, "Hello Ladies" and "Ja'mie," "Getting On" is representative of the new HBO. Yeah, it's HBO, but it's still basically TV.

Even in its heyday, HBO had critical and commercial underperformers. "Hung" springs readily to mind while completing two separate double entendres. "The Wire," though brilliant from its inception, was not an immediate draw. (I remember back when I had to force-feed its genius to my fellow journalists. What a great time for invoking latent prejudice!) Ultimately, though, there was plenty of room in the zeitgeist, and David Simon's Baltimore-set epic, heavily populated with unknown black actors (and non-actors), did eventually capture the public imagination. Nowadays, with the ascendance of FX, AMC, Showtime, Netflix, Amazon and all other tribes participating in the Original Programming Wars, the battlefield has become impenetrably crowded, especially for humbler, less ambitious shows like "Getting On."

Even "Veep," arguably one of the funniest shows on television, on the heels of its best season thus far, could not rightly be described as hot at this moment or any other in its short broadcast history. And "Treme," Simon's soapy, long-running follow-up to "The Wire," takes a bow this year to little or no fanfare. You might expect a show with the impressive imprimatur and sheer production grandeur of "Boardwalk Empire" to incite more furor than steady, dispassionate griping about its excessive violence. Apparently, though, HBO may possess only one beloved, costumed epic at a time. When "Game of Thrones" returns this year on the backs of dragons, it will undoubtedly give the cable giant reason to trot out the old "not TV" slogan once again.

And what of "Girls"? you ask. The pasty, sexually charged comedy is easily HBO's most buzzed-about series. Already, the Season 3 trailer has garnered over 2 million views on YouTube. It premieres on Jan. 12, following a star-studded, potentially high-profile HBO Original, "True Detective" (more on that to come), and will almost certainly be a true TV BFD -- at least for a while.

I will be watching very closely, however. I maintain that, even with its frequent, vaguely titillating nudity, "Girls" is only slightly less narrow-cast than, say, "Getting On." (Young women screwing versus old people dying -- it's certainly not apples to apples, but you see where I'm going with this.) Last season was, for me, a scattered and inert disappointment, but I am not necessarily making an argument hinging on quality. "Girls" has been heralded as the successor to "Sex and the City," but already it seems that the younger show has considerably less scope than the former. (And even if their show does expand its horizons, Lena Dunham and co. are likely to find themselves treading the same territory that Darren Star and Sarah Jessica Parker did so many years ago.)

If the buzz does die down -- which seems inevitable -- we may find that the audience for "Girls" is merely the loyal kind, but not the pot-stirring, water cooler-circling kind. I guess that's fine. It works for "Getting On," "The Bridge," "Orphan Black" and all of those television shows that no one at the office, in the cafeteria or at the gym seems to be watching but you. Still, it's a bit of a letdown. It's always good to have something to talk about.