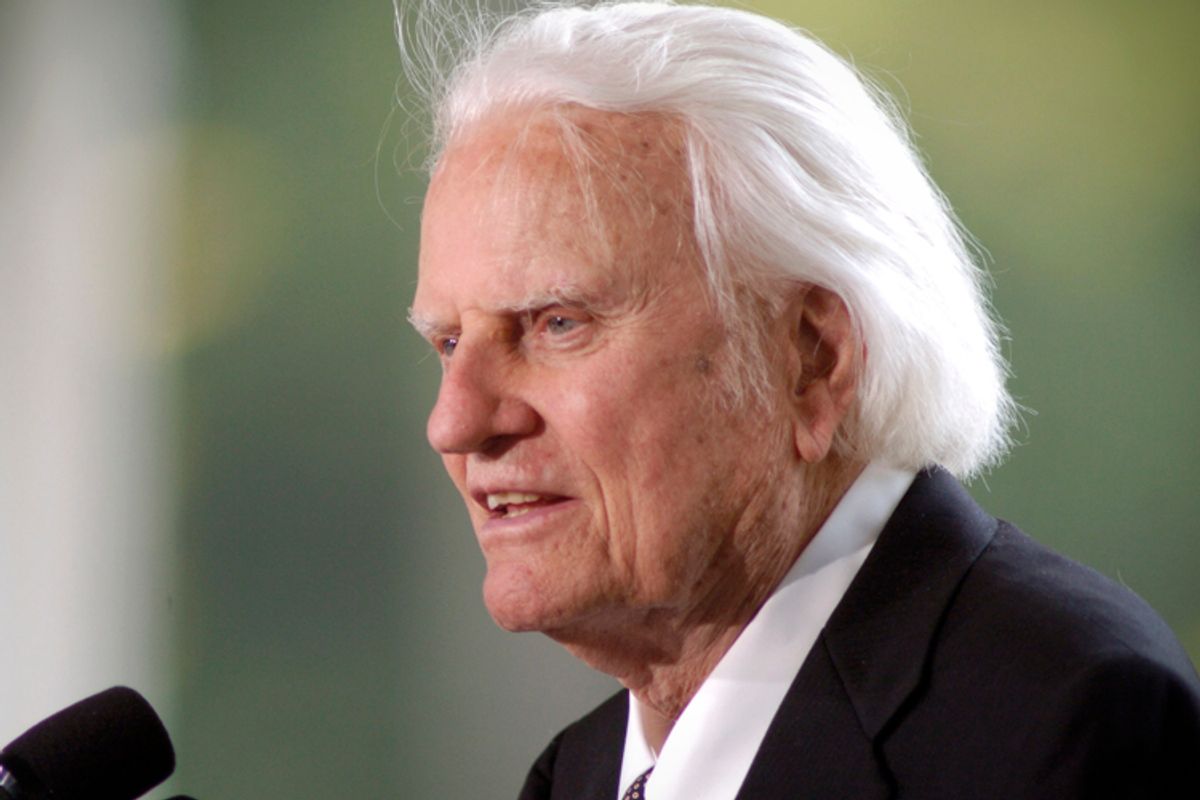 Since turning 95 last month, Reverend Billy Graham’s health has deteriorated, and judging by his family’s call for prayers, his life is nearing its end. Many things will be written about Graham's life by both disciples and his detractors, but if you want to know where the base of today’s Republican Party—the Christian Right—gets its mojo, look no further than this Southern Baptist preacher.

The genetic makeup of the GOP is one chromosome away from Graham’s DNA. Today’s Republican Party is a neo-Confederate pro-corporation movement, thanks to the supposed life-long Democrat (when he wasn’t endorsing Mitt Romney)—the Reverend Billy Graham. A childhood friend of Richard Nixon's it was Graham who helped the disgraced president articulate the “Southern Strategy,” which won Nixon the White House in 1968.

Steven P. Miller, author of Billy Graham and the Rise of the Republican South, writes that it was Graham’s public relationship with Southern Baptist ministers, and quips like, “Prejudice is not just a sectional problem” and “Criticism of the South is one of the most popular indoor sports of some Northerners these days,” that made him an much-loved figure among his fellow Southerners. Miller also says that Graham’s evangelical understanding of the sins of racism allowed many white Southerners to declare themselves absolved from past guilt.

Millennials can be forgiven for mistakenly thinking the Christian Right has been the main strain of the GOP since ad infinitum. It hasn’t. The Christian Right is still a relatively new dynamic on the American political landscape. Prior to the election of Jimmy Carter in 1976, no serious presidential candidate ever claimed to have been “born again,” and the emphasis of faith for a politician seeking high office was as rare then as a candidate declaring his atheism is today.

But something weird happened on the way to the forum. Religious fundamentalists banded together to oppose Jimmy Carter’s 1980 reelection campaign (Carter was a Southern Baptist), and in turn, put their support behind Ronald Reagan, who was a divorced Hollywood actor. This strange coalition on the right became a movement better known as the Moral Majority, and Billy Graham and Jerry Falwell were the tip of the sword.

The Moral Majority surprised nearly everyone by helping sweep Reagan into the White House. The Sarasota Journal wrote as much on Feb 9, 1981: “The merging of the political right with the religious right has taken the country by surprise.”

Until then, not even your most casual political observer believed that conservative Christians could or would play a pivotal role in shaping the outcome of elections. Screenplay writer Norman Lear said at the time, “The Moral Majority is neither the moral point of view, nor the majority.”

With help from the likes of Pat Robertson and a coalition of anti-gay, anti-Muslim, anti-feminist, and anti-ACLU networks, the Moral Majority became the Christian Right. While Graham publicly distanced himself from the Moral Majority, this was done purely for political optics. The media’s gullibility in falling for the “genteel, bipartisan, apolitical preacher” narrative gave Graham’s voice even more political clout.

Graham was a skillful orator, and he adeptly infused the teachings of Ayn Rand with those of Jesus Christ. In the Bible, Jesus says, “The meek shall inherit the earth,” and urges his followers, “To sell what you have and give to the poor.” But Graham, with the biggest Christian following in America during the '80s, helped turn the biblical Jesus into a supply side economist who wants us to be anti-government, anti-regulation, anti-healthcare, and anti-assistance for the poor Christians.

Where Bible Jesus feeds the masses with two loaves of bread, Ayn Randian Jesus says, “Bugger off, this bread is mine, you lazy moochers.” While Graham removed Southern Christians’ guilt over segregation, Ayn Rand removed the Christian Right’s guilt for being selfish and uncaring about anyone except themselves. Bruce E. Levine, author of Get Up, Stand Up: Uniting Populists, Energizing the Defeated, and Battling the Corporate Elite, wrote on AlterNet, “Not only did Rand make it 'moral' for the wealthy not to pay their fair share of taxes, she 'liberated' millions of other Americans from caring about the suffering of others, even the suffering of their own children.”

With the explosion of cable television, Graham turned his church into a mega money-making empire for himself. The self-proclaimed political non-partisan also turned his massive flock into a loyal legion of storm troopers for the Republican Party. Today, Graham’s son, Franklin, is the CEO of the Billy Graham Evangelistic Association. He has continued his father’s legacy of being a shill and supporter of far-right pro-corporate causes while pulling down a $600,000 salary.

On the eve of the 2012 election, the younger Graham bragged that it was his father’s appearance with George W. Bush at a rally in Florida which won the Texas governor the presidency in 2000.

In endorsing Mitt Romney, Billy Graham said, "I believe it is vitally important that we cast our ballots for candidates who base their decisions on biblical principles and support the nation of Israel. I urge you to vote for those who protect the sanctity of life and support the biblical definition of marriage between a man and a woman. Vote for biblical values this November 6, and pray with me that America will remain one nation under God."

Today, evangelism is synonymous with sacrificing the poor on the altar of big-business’ interests and is becoming the most reliable and agitated voting bloc of the Republican Party since the election of Reagan. We can rightfully accuse the Christian Right of ushering in three decades of failed trickle-down economics, which has made this nation one of the most wealth-disparate of the developed countries. It’s the political descendants of Graham who shut down the government with their radical Jesus said replace every government-funded service with a for-profit corporation ideology.

Graham’s coalition of hate also put social issues front and square in the GOP primary process, and no one was more hateful than Graham. White House tapes recorded him openly telling President Nixon he believed that the Jews had a “stranglehold on the American media” and that “this Jewish stranglehold has got to be broken or the country’s going down the drain.”

The National Archive tapes reveal the nation’s best-known preacher in agreement with a stream of bigoted Nixon comments about Jews and their perceived influence on American life. “If you get elected a second time, then we might be able to do something. There also the ones putting out the pornographic stuff,” said Graham. To which Nixon replied, “the Jews are an irreligious, atheistic, immoral bunch of bastards.”

Repeatedly, Graham’s judgment was found wanting, yet politicians on both sides seek his and/or his family’s approval and photo-ops, which shows how far the Christian Right has pulled this country to the right since 1980.

Graham blames today’s economic doldrums on God punishing the nation for its growing secularization and what he perceives to be an increase in immorality. “I don’t see our country turning to God…Maybe he will have to bring this country down economically before we turn our hearts back to God. We need to repent.”

Come the 2016 campaign season, when the likes of Rand Paul, Michele Bachmann, Rick Perry, and Rick Santorum talk about how “Christianity is under attack” and how the “takers” are destroying America, it will be Billy Graham’s shadow you have to blame for that.