Art by Zimmerman and George W. Bush grabs national attention because it seems like a window into their minds 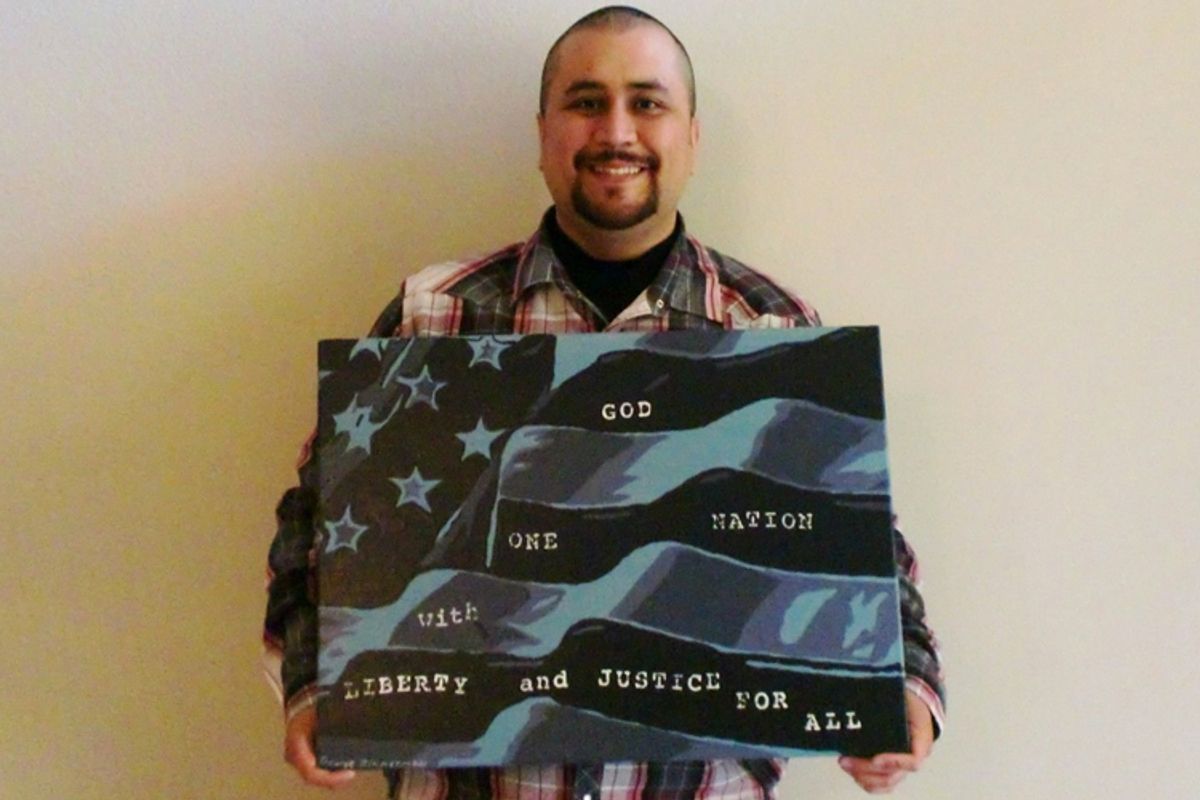 Yesterday, news broke that notorious Floridian and apparent amateur artist George Zimmerman is selling a patriotic and most likely inadvertently ironic original painting “Justice for All” on eBay. With the bid currently standing at just under $100,000, Zimmerman’s painting, featuring the phrase “God, One Nation, With Liberty and Justice for All” unsurprisingly went viral.

As with fellow infamous artist former President George W. Bush’s infantile yet captivating portraits of cats, dogs and his hilarious and slightly unsettling existential bathroom portraits, the media exploded with various opinions and analysis of Zimmerman’s art, ranging from the Huffington Post’s insistence that Zimmerman “has bizarrely begun expressing himself through painting” to New York magazine’s description of Zimmerman showing “his softer side by painting.”

More than a discussion of the quality of the work itself, the widespread interest in both Zimmerman and Bush’s paintings raises confounding questions surrounding the understanding of art, as well as the art market. Why are we so fascinated by these infamous amateur painters? Beyond their unquestionable fame, why are their paintings somehow more captivating for the wider public than those of most professional contemporary artists?

Oddly enough, an installation by artist Mike Kelley currently on view in his major posthumous retrospective at MoMA PS1 may hold the key to understanding the media frenzy surrounding these notorious painters.

Originally constructed for Chicago’s Renaissance Society, Kelley’s installation “Pay for Your Pleasure” poses artists, writers, philosophers and other creative thinkers against a criminal outsider artist. The installation features enormous painted monochrome banners with artistic idols from Oscar Wilde to Gustave Courbet to Plato and Charles Baudelaire with quotes from each individual about the connection between art and criminal behavior. For example, Edgar Degas’ quote reads, “A painting is a thing which requires as much cunning, rascality and viciousness as the perpetuation of a crime.”

At the end of the hall of paintings, Kelley places an artwork by a known criminal, most often a serial killer, from the city in which the installation is shown, creating a tension between the idealization of art and crime with actual criminal art. At MoMA PS1, a simplistic, brightly colored painting by an anonymous criminal awaits viewers at “Pay for Your Pleasure.” However, when the installation first debuted at the Renaissance Society, Kelley included a twisted clown painting by killer clown himself, John Wayne Gacy, who, at that time, was still alive in a Chicago prison. With a box at the entrance to the exhibition asking for viewer donations to an unnamed victim’s rights organization, Kelley evokes the lurid guilt tied to the viewing of these criminal artists.

In a description of his conception of “Pay for Your Pleasure” published in Kelley’s collection "Minor Histories: Statements, Conversations, Proposals," edited by John C. Welchman, Kelley explains, “Still, we look through the paintings through the haze of their socially redeeming value, which hides our true fascination with the works. We are not interested in Gacy’s brushwork or images (usually bland depictions of clowns, landscapes or Disney subjects) we are interested in the man behind them, the person capable of incredible atrocities. The paintings allow us to stare safely at the forbidden.”

For Zimmerman and former President Bush, the public’s interest in their art seems to come from a similar impulse. When looking at a painting by a criminal, the viewer attempts to find some sort of redemptive, therapeutic impulse in the piece.

Even Zimmerman himself discusses his turn to painting through therapeutic terms in his description of the painting on eBay. Zimmerman writes, “First hand painted artwork by me, George Zimmerman. Everyone has been asking what I have been doing with myself. I found a creative way to express myself, my emotions and the symbols that represent my experiences. My art work allows me to reflect, providing a therapeutic outlet and allows me to remain indoors :-) I hope you enjoy owning this piece as much as I enjoyed creating it. Your friend, George Zimmerman.”

However, as Kelley observes, the true fascination with these figures’ works certainly does not entirely lie in the socially redeeming power of painting. Gazing into these infamous paintings, the public wants to discover some inherent truth about the painter, whether a reflective impulse in Bush about the failure of his presidency, remorse on the part of Zimmerman, or whatever horror lies within a killer like John Wayne Gacy. Staring, as Kelley says, “safely at the forbidden,” we believe we are accessing these figures on a deeper level than we can through sound bites, court records and quick interviews.

Infamous amateur artists also work to throw art, as well as the art market, into question. For those outside the art media, contemporary art has always been viewed as a fairly loathsome enterprise. Seen as elitist, alienating and downright inaccessible, art has not fared well as a popular populist medium. While some art, like street art, has managed to capture the wider public’s interest, art at large is still viewed as a deviant pursuit.

In “Pay for Your Pleasure,” Kelley’s juxtaposition of artists lauding criminality with an actual criminal confuses the division between high art and amateur art, artist and criminal. Notorious artists like Bush or Zimmerman set up a tension between professional art and art created out of some therapeutic impulse. What is the difference between the two? Is there a difference?

This tension becomes even more strained as the art market is brought into the discussion. With Zimmerman’s painting currently fetching $100,000, which will most likely only rise until the end of the auction on Dec. 26, Zimmerman is currently making more money off of his art than many artists in Chelsea. Similarly, there is little doubt that if George W. Bush sold his paintings, he would make as much as, if not more than, Zimmerman.

For Bush, his artwork and the public’s reaction to it seem to have worked to save his legacy. In a recent Vanity Fair article titled “How George W. Bush Evolved From the Uncoolest Person on the Planet to Bona Fide Hipster Icon,” Juli Weiner reveals how Bush’s paintings may have absolved him of the mistakes of his presidency.

Analyzing the reactions to Bush’s paintings, Weiner states, “What’s important here is not the generosity of the criticism but the assumption that Bush is capable of self-reflection. Bush appreciated art; an appreciation of art implies humanity, according to the enlightened classes; by the transitive property, Bush has humanity. War-mongers: they’re just like us!”

In some respects, Bush’s paintings have humanized him, turning Bush from the war-mongering, Katrina-ignoring Dick Cheney pawn into America’s doddering artistic uncle. As Weiner continues, “And artists are forgiven. In the rich American tradition of wife-stabber Norman Mailer, unrepentant anti-Semite T. S. Eliot, full-blown racist Jack London, and Nazi sympathizer (and Jewish lesbian!) Gertrude Stein, bad reputations are mitigated by good (or, in the instance of Bush, surprisingly not-terrible) art.”

While it is certainly too soon to guess if Zimmerman’s art will likewise give the public some imagined insight into his soul (I have my doubts), the public remains interested in humanizing infamous figures through their artistic practice.