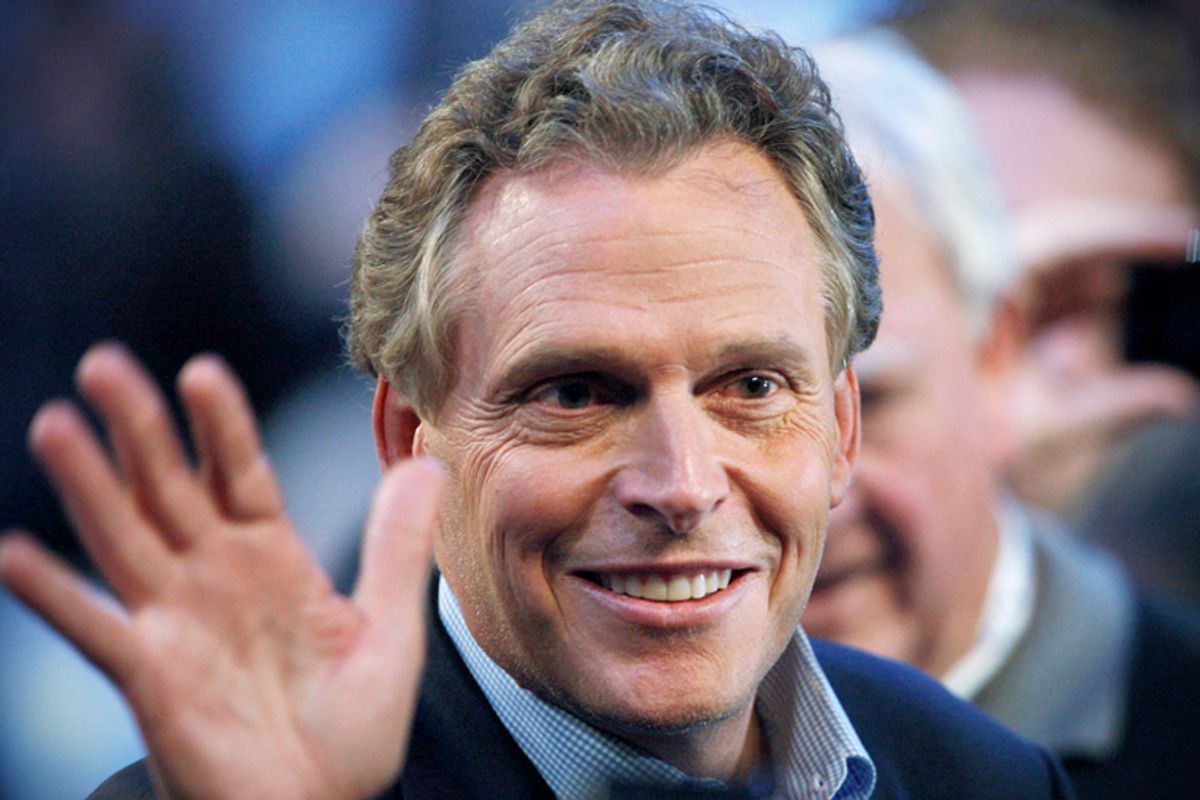 When Terry McAuliffe was declared the governor-elect of Virginia on Nov. 5, abortion rights advocates breathed a deep sigh of relief. Vehement anti-choice GOP candidate Ken Cuccinelli had been vanquished, and reproductive rights organizations like Planned Parenthood Federation of America heralded McAuliffe’s win as a “victory for women.”

Now it seems that celebration may have been shortsighted. McAuliffe will reportedly reappoint current Gov. Robert McDonnell’s health secretary Dr. William Hazel Jr. as his own. And in so doing, McAuliffe, a Democrat who ran explicitly on his support for reproductive rights, has betrayed the very pro-choice voters who helped elect him.

Hazel, an orthopedic surgeon, is no friend to women's rights. He was criticized for his handling of the adoption of a law that mandates an ultrasound be performed on a pregnant person seeking an abortion, regardless of medical necessity, and forces the patient to pay for it. As the Richmond Times-Dispatch has reported, he oversaw the health and human resources department at a time when draconian new abortion clinic regulations were promulgated. Hazel also spoke at Liberty University in opposition to the Affordable Care Act, an ultra-conservative university whose own code of conduct includes a $500 fine and 30 hours of disciplinary community service for students who have an abortion.

Yet, McAuliffe ran in a purple state as a pro-choice Democrat, one who openly championed his endorsements by reproductive rights organizations like NARAL Pro-Choice America and Planned Parenthood, an organization that spent $1 million on ads criticizing Cuccinelli alone.

McAuliffe’s support for reproductive rights was front and center in his campaign as he ran against Cuccinelli, a fervently anti-choice, extremist conservative candidate who supports personhood measures that would criminalize certain types of birth control and sought to defund Planned Parenthood, among his many other anti-choice escapades. The McAuliffe campaign ran five separate ads explicitly criticizing Cuccinelli’s support for a personhood bill that would ban abortion under all circumstances, portraying Cuccinelli as an out-of-touch anti-choice extremist and McAuliffe as the reasonable, reliably pro-choice alternative.

So why is McAuliffe reappointing Dr. Hazel as health secretary?

McAuliffe, whose win was largely propelled by the overwhelming support of black women voters, won the overall women’s vote by 9 percentage points. Reproductive rights organizations and activists campaigned hard for McAuliffe, giving his campaign a financial and energetic boost. McAuliffe was all too happy to take resources from reproductive rights groups as he stated his opposition to further abortion restrictions in the state and reaffirmed his commitment to women’s healthcare.

Until, of course, it comes time for cabinet appointments and actual governing.

Some reports suggest that the governor-elect may have reappointed Hazel in an effort to win Republican support for expanding Medicaid under the Affordable Care Act. First of all, this is far from guaranteed to work. As one GOP lawmaker, Del. S. Chris Jones, R-Suffolk, told the Washington Post, “It’s certainly fantastic news, but it doesn’t change my position on Medicaid expansion, which is reforms first.”

Further, Hazel himself opposed Medicaid expansion while serving under Gov. Bob McDonnell. If McAuliffe really wanted to tap a Republican to reach across the aisle, he could have chosen another, who hasn’t supported antiabortion legislation. He could have worked with Republican legislators on other issues to help bridge the partisan divide and warm them to Medicaid expansion. Short of choosing Ken Cuccinelli as his attorney general, reappointing Hazel as health secretary is about as blatant a slap in the face as McAuliffe could serve to the women of Virginia.

If male Democrats are going to run on a pro-choice platform, they need to deliver. It is not enough to simply say you support women's rights; you need to follow through on policy. In reappointing Hazel to health secretary, McAuliffe has betrayed the very voters who delivered him the governorship, and sent a message that while abortion rights may have been front and center in his campaign, that may be where they stay.