Exposing the education "reformers'" big lie: Here's how progressives -- and our kids -- beat the corporate establishment

A populist uprising is coming in defense of public schools. Are Democrats on the side of Wall Street or the people? 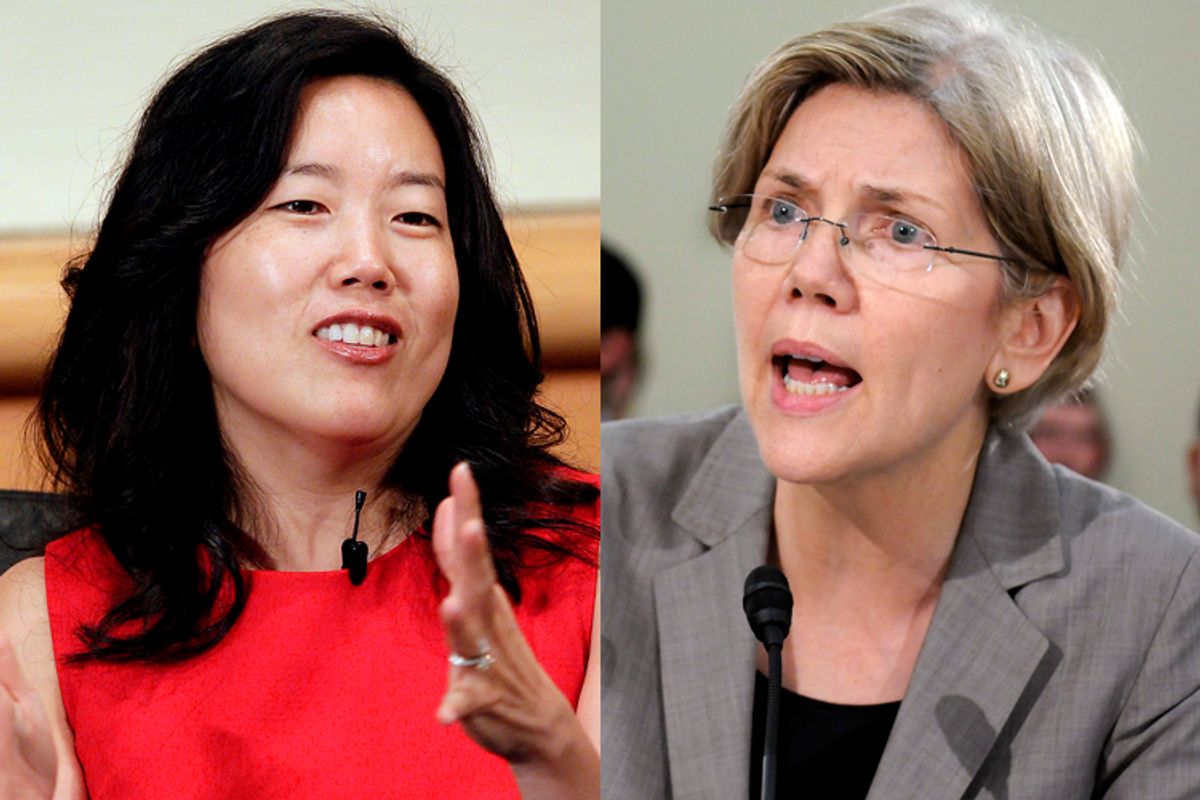 Earlier this month, progressives in the Democratic Party objected vehemently, and rightfully so, to an Op-Ed in the Wall Street Journal from a Beltway belief tank called Third Way that declared populism as “disastrous for Democrats.”

The piece specifically attacked Massachusetts Sen. Elizabeth Warren who has advocated popular positions on economics, such as expanding Social Security.

For sure, the authors of the piece, Jon Cowan and Jim Kessler, got the factual argument wrong, as Michael Hiltzik so capably explained at the Los Angeles Times.

But getting the facts wrong is not what riled progressives the most.

While the substance of Cowan and Kessler's argument revolved around Social Security and its supposed insolvency, what likely galled progressives the most was having their ideas called a "left-wing … fantasy" by a faction of the Democratic Party more closely aligned with the financial industry.

In response to Cowan-Kessler, Warren promptly issued a call on big banks to disclose their financial contributions to think tanks like Third Way – a not so subtle suggestion that their aversion to populism is mostly about sticking up for Wall Street.

Richard Eskow at Campaign for America's Future wrote, "Third Way is very much a creature of Wall Street (as is documented here.) Its banking connections help explain [their] positions."

No doubt, the emotional heat of the pushback, not just the facts, is what likely caused many Democrats supportive of Third Way, even congressional representatives, to denounce the editorial.

But facts aside, real populism needs to rise to a more prominent role in the agenda of the Democratic Party – and not just on economics.

A Real Populist Uprising, If We Want One

While a pie fight over economic populism in the Democratic Party played out, there was, in fact, a real popular rebellion that drove thousands of Americans into the streets – from Maine to San Francisco, New Orleans to Minneapolis/St. Paul – to denounce the nation's current education policies.

Organizers of the Day of Action – the Opportunity to Learn campaign, the nation's teachers' unions and numerous community organizations – amassed more than 120 press hits on the 100-plus events that occurred that day.

The multiple events amounted to “the largest coordinated action to reclaim the promise of public education in recent memory,” according to a statement from the American Federation of Teachers.

Stories from people across the nation told of how students and communities are being undermined by an assortment of policy mandates that have been branded as education "reform."

Participants at these events complained of lack of resources for their schools and inequality of how resources are spread. Protesters – whether they were teachers, parents, students or community activists – expressed feelings of no longer being in control of their education destinies. And they pointed to governing policies that are increasingly perceived as being driven by corruption and profit making rather than the best interests of students.

A review of the protests, posted by this author, noted, "What’s clear about the events is that there is widespread evidence that public education has become a rallying point for a huge cross section of the progressive community, including labor leaders, educators, clergy, members of immigrant communities, civil rights activists, representatives from grassroots student and parent groups, and community organizers."

So apparently, one of the foundational principles of progressivism, a right to a free and viable access to quality education – a real "left-wing … fantasy" if there ever was one – is now broadly perceived as being at risk.

Surely here's a populist uprising that should get the same sort of rise out of progressives that a D.C. dust-up over Social Security gets. Right?

Out of Sync on Education

The big problem is that for a long time most Democrats – even many of those who count themselves among the "progressive" faction – have been getting education wrong.

In an education landscape dominated by No Child Left Behind and its spawn Race to the Top, Democrats and Republicans essentially “copied each other” on education policy, as veteran edu-journalist Jay Mathews recently observed .

For years, education policy has been characterized by a “Washington Consensus” that insists public schools are effectively broken and only a market-based "reform" agenda will fix them.

People calling themselves “progressives” have tended to unite with conservatives in this consensus – even while they chose to fight tooth-and-nail on other issues.

How ironic it was, for instance, to see the leader of Center for American Progress Neera Tanden denounce Third Way's views about populist economics as those of "Washington centrists," when CAP has been such an active promoter of centrism on education policy.

In many respects, policy ideas CAP generally has supported for education represent the essence of Third Way thinking. And funders for CAP's agenda include the likes of big money operations such as the University of Phoenix and Pearson, which have done much to undermine the local, democratic control of public schools.

CAP, for instance, has promoted charter schools expansions, "value-added models" of teacher evaluation that base education practices on test scores, and using standardized test scores as a way to measure a return on investment in education.

These are all positions any education "centrist" would love – and exactly what Americans protesting in the streets this month are against.

It was CAP, after all, that recently proclaimed mayoral direct control of schools – a position also embraced by Republicans – as an appealing "alternative" to the traditional governance of democratically elected school boards.

Tell that to citizens of Chicago who've been in the streets protesting mass school closings engineered by Mayor Rahm Emanuel.

Or to New York City voters who voted for Bill de Blasio for mayor instead of the Michael Bloomberg's surrogate Christine Quinn, to a great degree because of Bloomberg's unpopular education policies.

Or to parents and teachers in Bridgeport, Conn., who just overturned their state-appointed leadership's choice of Paul Vallas for their school leader.

As with economics, the Washington Consensus on education has been an illusion all along, and Democrats, including the Center for American Progress, need to snap out of it.

Writing at the Huffington Post, experienced political insider Mike Lux observed that the "battle" for the soul of the Democratic Party "isn't between progressives and centrists" at all, but "between the biggest special interest corporations in the world … and those of us who want to confront and rein in their power."

As with economic policy, America's education policy has largely been driven by the big money of Wall Street and private foundations.

But now the real impacts of the education reform agenda are starting to play out on the ground. Americans are awakening to the catastrophic effects of the "reform" movement. And they're responding by making the fight for public schools another front in the broad grass-roots struggle for equality of all kinds.

How will leaders in the Democratic Party respond?

Getting the Progressive Message Right

On education, so far Warren isn't so clear. The little that has come out about her views was in the context of her run for the Senate seat when school choice proponents unearthed a quote from her book that could lead one to believe she backs school voucher programs.

School vouchers that enable families to redirect public funds to private schools and privately operated charters are not something in any way progressive – and not just because they don't appear to do anything to improve academic achievement.

There's also evidence that vouchers and other "choice-based" systems lead to the kind of education inequities progressives decry about current economic policies, where those who already have the most power game the system for their own benefit.

Leonie Haimson, executive Ddirector of the grass-roots parent group Class Size Matters, explained in an email, "I don’t know what her current position is, but I’d hope that Eliz. Warren now realizes that instituting vouchers would lead to a radical expansion of privatization and a weakening of governmental oversight and regulation over education – similar to what happened in the financial industry that triggered the onset of the great recession."

Added public school advocate Jan Resseger, also in an email, "A universal public school voucher? Wouldn’t this be merely another tool to discredit and close the public schools in the poorest communities where the remaining children still need a good education?"

Further, school voucher programs have been defeated time and time again at the ballot box, and are not popular with the American people – even in red states like South Carolina.

2014: The Year of Education Populism?

Richard Eskow, writing in another post at the Campaign for America's Future, recently predicted, "2014 will be 'The Year of Economic Populism.'"

Given the recent outpouring of popular unrest over school policy – a continuation in fact of an ongoing Education Spring that began earlier this year – a wave of education populism is rising across the country too.

"Now the question is," Eskow added, "who gets to decide what that really means?"

What education populism "means" to many progressive-minded Democrats within the Beltway is not yet clear at all. But clearly old ideas like vouchers and more testing aren't going to fly in a post-NCLB era.

Policy alternatives that align with real progressive values are being pushed from the bottom up. Democrats at the top had better notice.