I can't go for that: The case against Hall & Oates 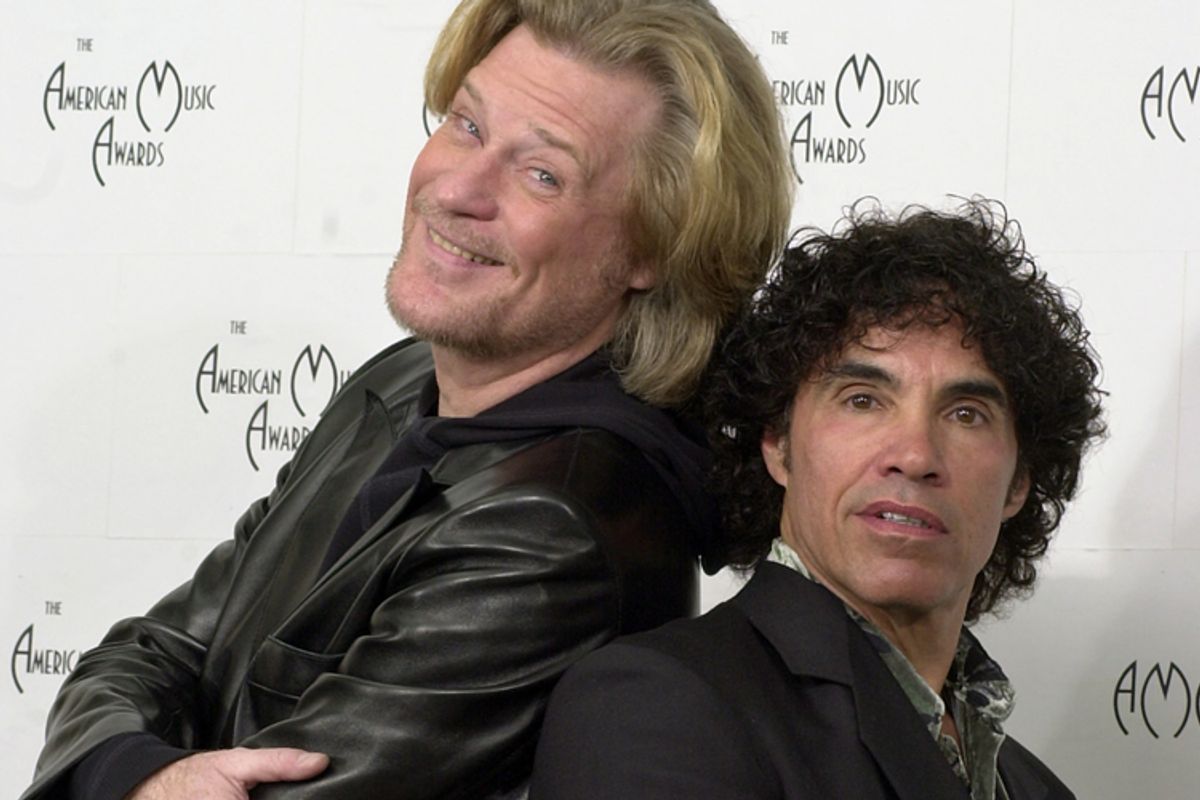 In the March 1987 issue of Penthouse, Daryl Hall, the blond-headed and non-luxuriously-mustachioed half of the pop duo Hall & Oates, explained his interest in the dark arts: “Around 1974, I graduated into the occult, and spent a solid six or seven years immersed in the Kabbala and the Chaldean, Celtic, and Druidic traditions (and) ancient techniques for focusing the inner flame, the will that can create unimagined things and truly transform your individual universe.”

Hall also revealed that his great-great-grandfather was a warlock, then placed himself in a lineage of noted satanist Aleister Crowley: “I was fascinated with him because his personality was the late 19th-century equivalent of mine — a person brought up in a conventionally religious family who did everything he could to outrage the people around him as well as himself.”

Outrage? That last bit makes him sound like Ozzy Osbourne or Madonna circa “Like a Prayer,” artists who worked to provoke as well as to entertain (or, arguably, confused the two). That’s why it’s so difficult to align Hall with Crowley or even imagine him as a person devoted to the occult. With longtime collaborator John Oates, Hall made some of the most harmless, lame and conservative pop music of the MTV era. When they were singing “I Can’t Go for That (No Can Do),” Ozzy was biting the head off a bat; when they scored a No. 1 hit with “Out of Touch,” Madonna was singing “Like a Prayer” in front of burning crosses. You don’t have to be controversial to be respectable or interesting, of course, but aside from Hall’s interest in the occult, the duo rejected controversy and embraced conformity. They made safe pop that minds its manners.

On the other hand, how else could Hall & Oates enjoy such a successful career but through the intervention of some occult entity? How else could they maintain such a vaunted legacy such that their hits are met not with a rolling of our collective eyes but with the jubilant singing-along of listeners who weren’t even born when “Private Eyes” were watching you? How else could they have been voted into the Rock & Roll Hall of Fame without some animal sacrifices and a whole lot of black candles?

Hall & Oates’ impossibly long career of moderately catchy tunes begins in Philadelphia in the late 1960s, when the two teenagers were in vying crooner groups, Hall in the Temptones and Oates in the Masters. Eventually they joined forces as a fairly unchallenging soft-rock band, signed with Atlantic, and had a string of hits in the 1970s: saccharine smashes like “Sara Smile,” “She’s Gone” and Rich Girl.”

Of their early discography, their ’73 debut “Abandoned Luncheonette” stands out as the foundation of their cult, an album so manically produced that it is often mistaken for innovative. Their mix of falsetto harmonies, acoustic folksiness, out-of-nowhere banjo and fiddle breaks, and garish production can be occasionally intriguing, if so soft that it makes even Seals and Crofts sound like Slayer by comparison. Lyrically, “Luncheonette” is an awkward little curio, crammed with references to toothbrushes and dishwashers and cracked china — all fairly intriguing bric-a-brac for a pop song. This is nothing so interesting as a slice of life. Instead, it proves a cloyingly sentimental portrayal of life and love.

Because the duo hailed from Philadelphia, Hall & Oates have been subsequently classified as Philly Soul, but that distinction has less to do with musical style than with sheer luck of geography. The City of Brotherly Love produced some amazing acts in the 1970s, including songwriter/producers Gamble & Huff, Harold Melvin & the Blue Notes, the Delfonics, MFSB and Billy Paul. They emphasized luxurious arrangements and silken vocals, often pushing the limits of soul and R&B. Hall & Oates by comparison sound slick instead of smooth — defined by studio sheen and more than a little desperate to impress. Hall had — still has — a tendency to oversing, as though suspicious of his instrument and convinced that vocal ululations convey depth of emotion. There’s not much in the way of nuance to his performances; at best he can clobber you into submission.

Unlike their Philly peers, however, Hall & Oates thrived well into the '80s largely by abandoning the lush production of “Abandoned Luncheonette” and appropriating the synths and drum machines of post-punk and new wave. When MTV was just beginning to stake a claim on teenagers’ attention in the early 1980s, Hall & Oates became superstars thanks to a string of hit singles/videos: “Kiss on My List,” “Private Eyes,” “Maneater” and “Out of Touch.” Each of those, along with “I Can’t Go for That,” reached number one between ’81 and ’84. Commercially, it’s a remarkable run; creatively, each song sounds increasingly indistinct: radio pop by the numbers.

The hits petered out as the decade wore on, with the embarrassing “Live at the Apollo” and the wan “Ooh Yeah!” failing to replicate the duo’s earlier successes. Thus begins the third phase in Hall & Oates’ improbable career. Never mind the assorted solo projects, hits packages, nostalgia tours, no-chemistry duets and attempted comebacks that filled their time in the ’90s and well into the 21st century. They have become the ultimate nostalgia act, the Platonic ideal of cheese-pop whose performances are so hammy and whose lyrics so nonsensical that they essentially make fun of themselves. If they are the kings of karaoke, it’s not so much because it’s so easy to mimic Hall’s vocal style, but because these songs seem to acknowledge the inherent silliness of singing words off a screen with a pre-recorded backing track.

In other words, Hall & Oates live right on the lip of irony. Even those current artists who have covered their tunes and insisted on sincerity — from the Bird & the Bee, who recorded a full album of Hall & Oates tunes, to Alison Brie, whose Brooklyn band performs “Rich Girl,” because of course — seem to hint that the whole thing is innocently corny. It is, and it isn’t — which may be the ultimate complaint against the duo. Their music doesn’t signify anything. There’s no subtext, no worldview, no underlying melancholy or creative exuberance — no real connection to the world outside of the song itself. The music, as a result, is hermetic and ultimately hollow: a time waster.