Teaching "The Odyssey" at San Quentin

I worried the inmates would dismiss the ancient story. Instead, they saw themselves -- and the power of literature 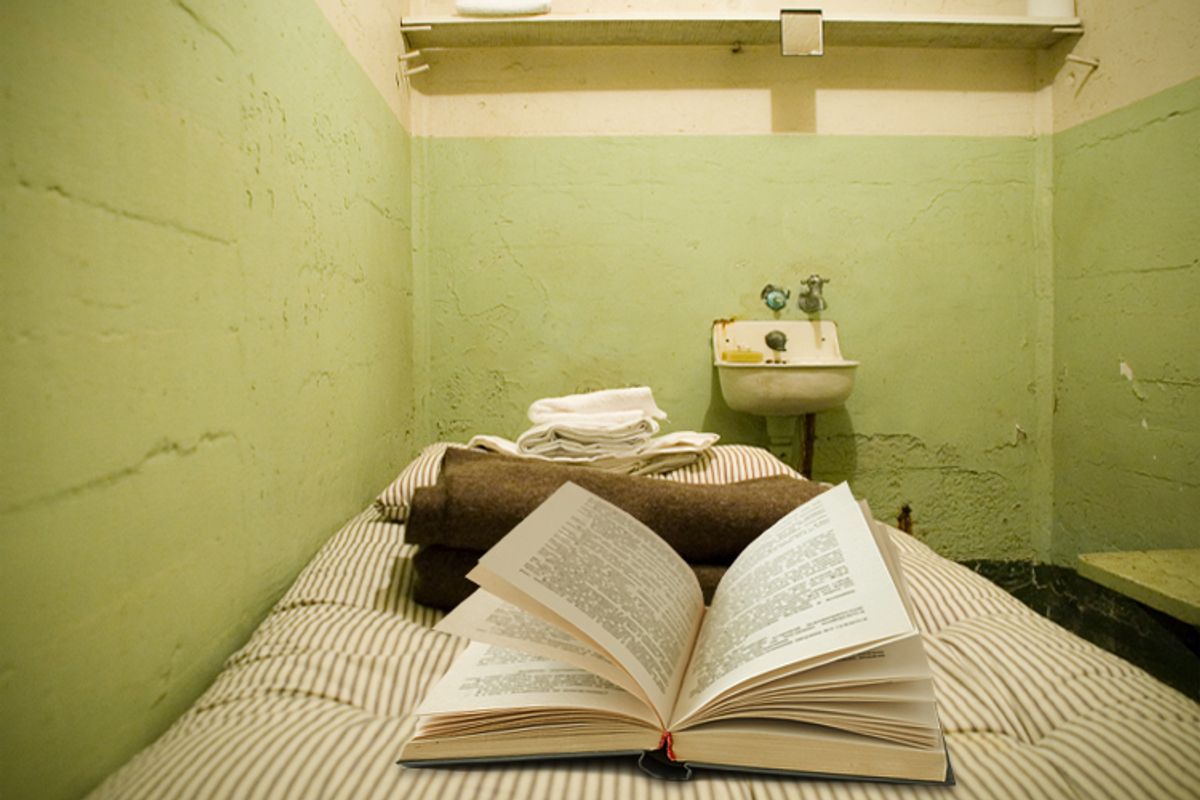 The opening of “The Odyssey” describes Odysseus as polytropos, a man “much turned” and “much turning.” He makes much happen, and much happens to him. When I selected “The Odyssey” as the first text for my English 101 course at San Quentin Prison, I worried about the choice. It’s a difficult work for readers of limited literary background, and I wondered how a population of mostly black and brown men doing long prison terms would relate to the story of an ancient Greek king. As it turned out, I had them at polytropos.

The theme of the course was life as a story, and at the first class, I asked them to tell a story from their own lives. A few declined; most spoke. One recalled his boyhood in Cambodia, the day he saw a river filled with floating corpses, victims of the Khmer Rouge. One had been unable to say goodbye to his terminally ill mother because he was in prison. A black man from Arkansas had seen his cousin murdered by white supremacists. One shot a man in a drug dispute. Another had grown up as a neighborhood protector and admired the way Odysseus “took care of business,” saving his crew from the Cyclopes and killing the suitors. Another man had gone berserk when the love of his life sent her brother to tell him their wedding was off. My students were polytropos aplenty.

When we first see Odysseus, he is gazing across the sea, weeping for home. When I read this passage aloud, a hush fell over my students. From various places on the grounds at San Quentin, inmates can see the expanse of San Francisco Bay. They, too, have looked across the water, thinking of home. One student, a man in his 20s, objected to Odysseus’ tears; he thought they showed weakness. The others, mostly older, challenged him. No, they said. It takes strength to show your feelings. It is heroic to cry.

Their points of resonance with Odysseus were many. When Odysseus learns that in order to return home, he must first journey to the underworld, they nodded. They are held in their own Hades, and they hang on by believing that if they survive the hell of prison, they will return home.

Plotting against the suitors occupying his palace, Odysseus lies awake in doubt, reminding himself, “Bear up, old heart.” Inmates, too, worry about what’s going on at home, and one admitted, “I lie awake like that, too. I give myself pep talks.”

They recognized the undisciplined ego from which Odysseus proclaims his identity to the Cyclopes, thus inviting the wrath of Poseidon. For their own hubris, they have paid dearly. At other times, Odysseus survives through self-control, and the lesson is not lost on them. When Odysseus wins help from the young princess Nausikaa through humility and finesse, they see that softness can be a source of power.

Homer never tires of reminding us that when Agamemnon returned home, his wife had betrayed him and conspired in his murder, the better for the reader to appreciate the loyalty of Penelope. Penelope’s fidelity was not lost on my students. “She’s a down broad,” one said admiringly. I needed a translation. “You know,” he said. “She stands by him, even when he ain’t there.”  The others nodded.

Early in book one, Zeus complains that men blame the gods for their afflictions. Though these inmates have plenty of material to mine for excuses — guns and drugs, gangs, abusive parents, violent neighborhoods, poverty and failing schools — I never once heard an excuse. They claim the bad choices and terrible actions as their own. They are men in repentance.

Following “The Odyssey,” we read “The Catcher in the Rye.” At first the students were puzzled by the transition from a hero like Odysseus to an antihero like Holden. A couple of them never got past their disgust with a rich kid wasting opportunities that few have. But most of my students, after a few discussions, began to see that Holden’s alienation is revelatory. Phonies do abound, life is a game if you’re one of the hot shots, and few of us escape the way society corrupts the innocence we had as children. One night when we were discussing Holden, a middle-aged black man in for murder shook his head and said with quiet amazement, “I’m like this dude.” One inmate, when he finished “Catcher,” started reading it again. By the next class meeting, he had read it four times. At semester’s end, when I asked which works would stick with them over the years to come, many said “Catcher,” even some of those who had not liked it. Maybe more than one realized they are like that dude.

A few weeks later, one of the men came into class beaming. One afternoon he had been taken to a local hospital for a medical procedure, and he and the nurse had engaged in an animated conversation about Holden. “She remembered the part about the ducks on the pond,” he smiled. “We talked about that.”

The same forces that divide us into haves and have-nots with regard to material wealth also divide us with regard to educational wealth. Only a few of my students had heard of “The Odyssey”; fewer had heard of “Catcher.” None had read them in school. But now, though they live in prison, two men sharing a cell 10 feet long and 4 and a half feet wide, they had journeyed to ancient Ithaka and to Holden’s Pencey Prep. Now they knew those works and they could discuss them. They had formed their own opinions. Now they had a seat at the cultural table.

As the semester progressed, we read Zora Neale Hurston, James Baldwin, a variety of poets, essayists and story writers. In these works of literature, my students saw a wider world than the one enclosed in those 50-foot walls, and they also saw themselves: their virtues and their vices, their pain and sorrow, their aspirations.

So having read the stories of others, it came time to write a story from their own lives, and some returned to the stories they had told on that first night of class.

One recalled a particular day when he was a young boy in a refugee camp in Thailand, standing in a very long line to get his bowl filled with rice. When finally his bowl was filled, he hurried back to his hut, and in his haste he tripped and fell, spilling every bit of rice in the mud. What is true of every good story was true of his: It was particular; it was a story only he could tell. And it was universal, for who among us has not waited so very long for something deeply needed only to have it spill before our eyes? Indeed, in his story I saw my own: a wife who walked away from our marriage in search of something else, taking with her my last chance to become a father. It was part of the reason I had come to teach at San Quentin, to ease my own grief by helping others.

Another personal essay, written by one of the better writers in the class, recalled an incident on the yard. This inmate had gotten into a fight, not his first, been pepper-sprayed and handcuffed by the guards and left on the ground for several hours to shiver in the cold fog before being hauled off to “the hole,” solitary confinement. Lying on the asphalt, he had an epiphany. He had spent his life going nowhere good, nothing had changed, and nothing was going to change — unless he did. From that moment, he stayed out of prison trouble, learned to meditate, began enrolling in programs and courses. The object of his epiphany was that sliver of freedom that even the incarcerated have — we are always free to make something out of what has been made of us.

Before the semester began, I had tried to prepare myself for encountering some intense attitude. What did this rich white guy think he had to teach convicted felons? My fears were unfounded. Over the course of the semester, the men were earnest, hardworking, open and appreciative. They know the country is fed up with crime, and that as incarcerated men they are hated by most of society. To those who come in from the outside to help, they feel a deep appreciation. They practice gratitude.

At the end of the course, one of the students wrote on his course evaluation, “Thank you for not being afraid of us.” I had forgotten it might be an issue. One night during class, I thought to myself, “Here I am, all 138 pounds of me, sitting in a room with 22 convicted felons, half of them in for murder, not a guard in sight, and I could not feel more safe.”  I am not naive. I know that there are some sick and evil people in prison, but for the most part they do not show up in the college courses. Just as I teach the cream of the crop of American teenagers in prep school, so do I teach the cream of the crop of convicted felons.

There never has been, and there never can be, proof that literature makes people better. But it reminds them that they are human, that they have stories, and that however polytropos their lives, the final author of their stories is they themselves. That they are incarcerated is a fact; it is not, however, their whole story. In an end-of-term note, one student wrote, “I had a hunch there was more to my story. Now I know I was right.”

One day in June, we had a rare summer rain in the Bay Area, a daylong steady drizzle. After class, I was walking across the yard with several other teachers on our way to the gate. One of the inmates in the college program called out to us, “You all be careful driving out there. The roads will be slick.”

Bill Smoot teaches at the Castilleja School in Palo Alto, California, and in the Prison University Project at San Quentin Prison. He is the author of "Conversations With Great Teachers."