The 22 best duets of all time

From George Jones and Tammy Wynette to the Lijadu Sisters, these tracks will make you want to sing along 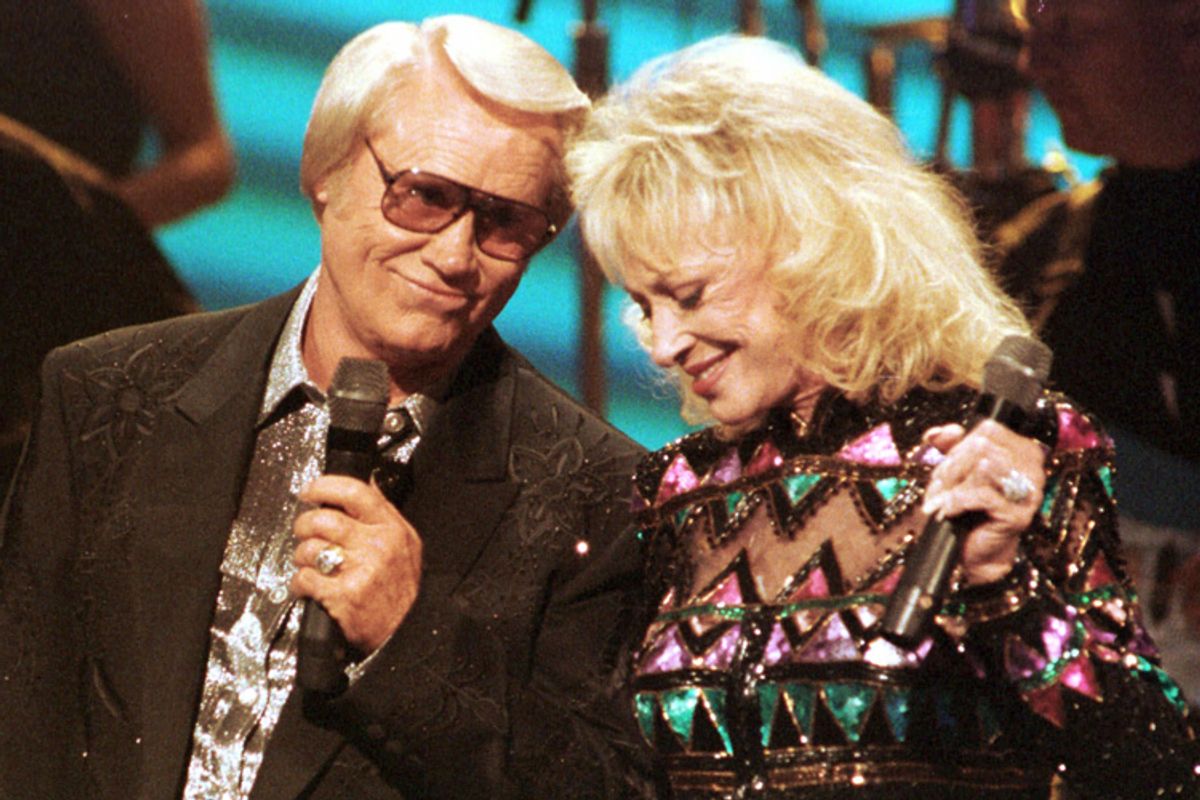 Just about every genre of music at every time period has a duet tradition. The 22 tracks below show just some of the ways in which you can put two voices together, from call and response to flirtatious back and forth to close harmony, whether by two guys, two girls, or one of each. Some of the duos here were famous long-term partners; others were one-off encounters. They're all (doubly) great.

Included on Harry Smith's famous "Anthology of American Folk Music," this is a mournful tune about creeping industrialization, with banjo player Clarence Ashley and (I believe) guitarist Dock Walsh exchanging wavering laments. The clunking string band music trundles along like that new machine, while the singers wail, resolutely idiosyncratic; sad, goofy, square pegs that won't fit into the coming system. If there were just one singer, this couldn't be nearly as awkward or funny or off-kilter. Rather than individual tragedy, you get a vision of a world in which everyone's shoes are broken.

Another "Anthology of American Folk Music" tune, Texas guitarist Blind Willie Johnson is accompanied by an anonymous female singer. Johnson's earthy growl asks questions and the woman's clear tone answers from on high; you almost feel like looking up above every time she comes in. (Charlie Parker's "Oh Death" is another famous old blues that makes use of similar call and response dynamics.

Jordan and Crosby flirt with insouciant ease. You could see the song topic as a winking acknowledgment of the duo's integration, but the joke in that case would have to be that they actually match perfectly, finishing each other's phrases or trading jibes without either, even for a moment, removing tongue from cheek. Crosby gets to rhyme "Lou" with "blue" and invents the word "quonking," but Jordan maybe gets the best vaudeville punch line.  Crosby: "The teeth you have are pearly white …" Jordan: "all both of them."

Sam Cooke was the most famous singer to come out of the Soul Stirrers — but believe it or not his predecessor, R.H. Harris, was not his inferior. This is the track to prove it. Harris soars over the a cappella quartet backing, blending a very Cooke-like yodel with a tougher edge. He's answered by the rough-voiced Paul Foster, and as the two switch leads the song takes on an almost unbelievable intensity, like they're going to crack through the surface of the earth to get to heaven.

I mentioned the wonderful and unjustly obscure Kay Starr in a previous list. This is one of her duets with deep-voiced country pop performer Tennessee Ernie Ford, around whom she can sing rings. He sounds like he's reading out of a book when he says, "What happened to the fur coat/I bought the other day"; when she says it "got up/and walked away," she plays with the rhythm so much it sounds like the critter didn't so much walk as bounce and roll. The contrast works wonderfully, though; his relatively straightforward effort provides a charming base against which she can strut and yawp (as in that final "ah!" she throws in after "we should be man and wife.")

The country brother duet tradition started in the '30s, but the Louvin brothers, Charlie and Ira, perfected it. Their keening harmony and Ira's affectless solo phrases drip with a blank menace. The song points toward a beyond in which lonesome voices are raised in merciless beauty.

Usually "duet" means two singers, but I couldn't resist including this tenor sax double. This track finds both Hawkins and Webster at their most lyrical. The sound of Webster's breathy reed vibrating at the end of each phrase as he and Hawkins solo together has to be one of the most tenderly virile moments in music.  Rather than trading off quips, like Jordan and Crosby, Hawkins and Webster slide up together, one single smooth surface of soul.

Simon and Garfunkel with a performance reminiscent of the Everlys -- their tones complementing each other like gloves until Garfunkel breaks away and up, only to come back down, rambling but never getting away, just like the song says.

Farcically sexy or sexily farcical, Gainsbourg and Bardot nasally talk-sing-whisper their way through tableaux of outlaw ennui while the backing swirls bleakly with the occasional orgasmic hiccup. Preposterous and iconic, it's been much covered and sampled, but no one's ever likely to recapture the flat incongruity with which Bardot says that first "Bon-eee."

There's some controversy about who was singing here. Marvin Gaye says that producer and writer Valerie Simpson was responsible for the female vocals as Terrell struggled with the brain tumor that was soon to end her life. Simpson insists that Terrell did in fact perform. Either way, it's a great song,  the nasal, relatively straightforward female voice providing a backdrop for Gaye's aching, mercurial vocals. With all the longing he puts into "Darling, darling, let me sing you a song," you can understand why she tells him, "you can sing to me all night long."

I was initially going to include a track from early New Orleans rock duo Shirley  & Lee, but this song seduced me. Shirley Goodman was basically retired in 1974. But producer Sylvia Robinson (an early rock 'n' roller herself) convinced her to provide the vocals for this track, which went on to become an international hit. It's not hard to see why it helped to spawn the disco craze. Shirley's soprano doesn't quite have the paint-removing quality of her original recordings, but it retains a ton of character, while male vocalist Jesus Alvarez, complete with plunging neckline and chains, gives with the soul like nobody told him there was a difference between disco and funk. Sadly this hit was the group's entire output; Shirley went back into retirement and Alvarez disappeared into obscurity. If you want to hear more, you've just got to play it again.

Maybe George and Tammy's best performance, the song swings back and forth between Wynette's smooth vocals and Jones' always-on-the-verge-of-a-hiccup drawl, while Billy Sherrill's genius glop production tosses in upright pianos and choral backup and that ridiculous, perfect bell when Wynette sings, "they fight their final round." In the last verse Wynette sings the guy's lines and George sings the woman's, the two of them helplessly, awkwardly jumbled together even as they helplessly, awkwardly stumble apart, toward the chorus and its harmonized epiphany of loss.

Identical twin sisters Taiwo and Kehinde Lijadu were major musical stars in Nigeria from the 1960s to the 1980s. "Life's Gone Down Low" is a trance-inducing mid-tempo slab of Afrobeat.  The track nods and occasionally seems to nod off before picking up its place again, the vocals low-key and declamatory. The doubled singing flattens out the sisters'  individuality as they repeat the title phrase over and over. "Man is headed for the nuclear power" comes out sounding less like a warning than a dead fact, the sisters following their slow funk drone to the apocalypse.

Conway Twitty and Loretta Lynn, "You're the Reason Our Kids Are Ugly," 1978

One of the best "he said, she said" exchanges by the king and queen of the genre. The lyrics are filled with zingers, and you get to hear Loretta Lynn pronounce "figure" as "figger." But the best part is probably the spoken-word banter at the end, where Conway tells her that their ugly kids take after her, and she replies, "What about the one that's bald?"  I'd swear Lynn actually cracks up at the fade.

The Vaselines are known for twee indie pop, so this Kraftwerk-does-Freud number (a Divine cover) is an oddity in their catalog. Frances Mckee provides the taunting little girl vocals, while Eugene Kelly grunts and emotes as if some complicated electronic contraption is rhythmically whacking him in the unmentionables.  Only real men get to be cogs.

When rappers get together it often feels more like a relay than a duet, with all the solo verses just happening to be collected on the same track. Tribe Called Quest's classic "Check the Rhime" from "The Low End Theory," though, is a real collaboration, with Q-Tip and Fife playing off each other's interjections. The staggering jazzy beat bounces them through a nostalgic past that doesn't quite unite them, but doesn't separate them either. "Um … let me see/damn I can't remember" — you can only miscommunicate if you're communicating.

Brazilian singer Virginia Rodrigues has one of the most amazing voices to ever visit the planet. Here, as ever, it doesn't so much sing as occupy the song with a gigantic purity.  In comparison, Veloso sounds merely human, giving his performance a pleasing vulnerability. When they sing together, he's just about lost — until the end, where humming surprisingly equalizes them, as if some of her power has rubbed off on him, or some of his weakness on her.  Rodrigues' performances are always perfect, but the touch of uncertainty Veloso brings adds a lovely flaw to this one.

Timbaland produced most of Brandy's 2004 "Afrodisiac," an amazing album that went nowhere and has since been virtually forgotten. This track starts with Timbaland beatboxing and stuttering, setting the beat up as an extension of his voice. Brandy's sensuous alto is itself multitracked, and her spurned woman accusations seem to be pinging around inside her head, with the itchy beat either offering encouragement or evasions, as she maybe speaks for him and he maybe speaks for her. A duet with one partner silent works nicely as a metaphor for a relationship in which the guy is both on the way out and all in her head, everywhere and nowhere.

A couple years back I got obsessed with luk thung — Thai country music. I especially fell in love with "Wong Kalamae" ("Caramel Band"), a 2005 album by Aump Nuntiya and Boonta Muangmai.  A Thai friend told me this song is about a girl torn between love of a Thai neighbor and a Laotian peddler. It encapsulates the duo's appeal nicely — crazy garage guitar wail, traditional Thai instrumentation, horns and fiercely pop beat. Aump (on the left) and Boonta (on the right) trade vocals and then sync up, their vibrato throbbing in stereo, mirroring the song's hope for cross-cultural amity and romantic bliss.

Japanese black/doom band Gallhammer have been around for a while as a trio.  Guitarist Mika Penetrator quit in 2010, but bassist Vivian Slaughter and drummer Risa Reaper soldiered on without her. "Aberration" features both of their vocals, which sound like call and response in the middle of an industrial accident between a chipmunk on amphetamines and a gargling ogre.

Brooklyn indie pop band Lucius features singers Jess Wolfe and Holly Laessig.  The doubled vocals work especially well on  "Turn It Around," a hooky retro-pop number about self-image, with a video maybe about the allure and pitfalls of glamour and maybe, possibly about coming out. The doubled singers add an insistently sunny girl-group vibe to the tale of female-female desire, self-reflection and despair.

Alt country stalwarts Jason Isbell and John Paul White recorded this for "High Cotton," an album of Alabama covers. The close harmonies and throbbing passion make this read as a love song not to some woman over there, but to the guy standing right beside you. The switch in the middle where White takes the lead is both the song's tear-jerker romantic jolt and the best evidence that the two principals are talking to, rather than near, each other.