Whether on "Scandal" or "SNL," these great actors went underutilized this year 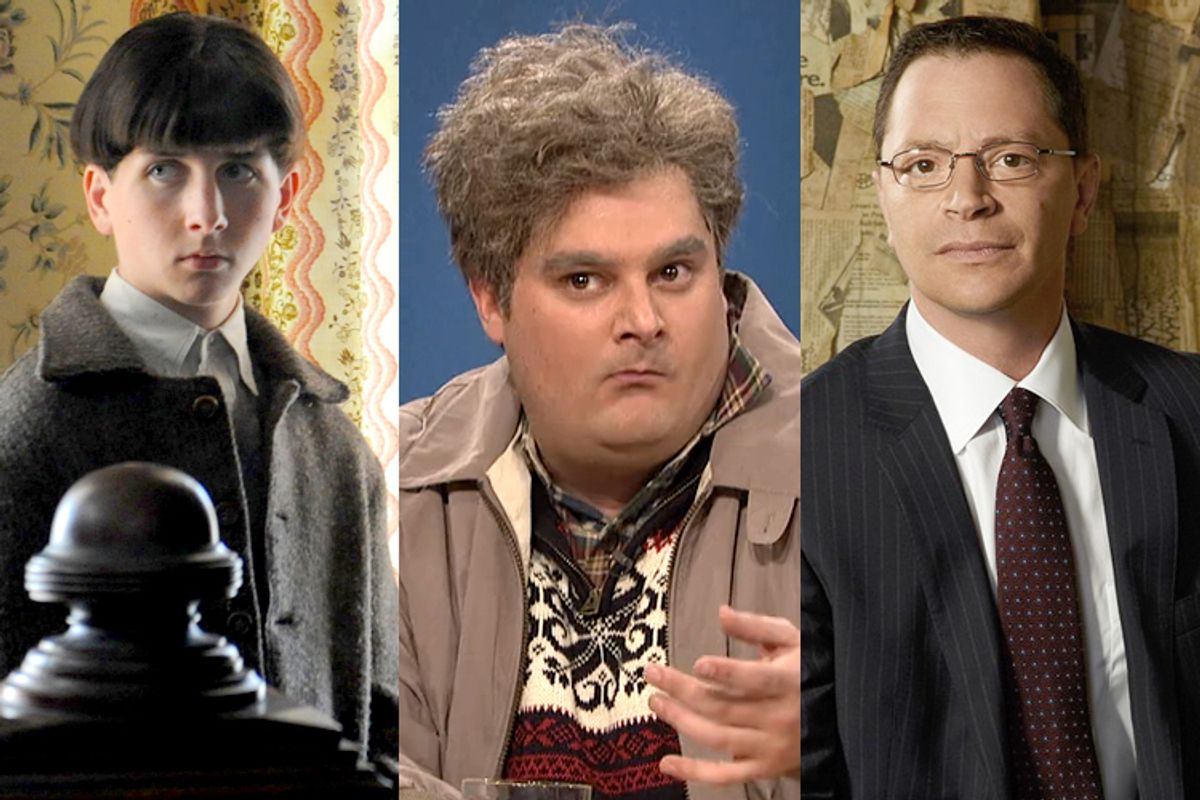 From the arrival of bold new faces like "The Blacklist's" Raymond Reddington and "American Horror Story: Coven's" Marie Laveau to the harrowing bow of "Breaking Bad's" Jesse Pinkman and Walter White, 2013 has been a year of great roles for great actors. However, not all the parts have been as rewarding, regardless of how game the performers. Here is a short list of the year's most thankless roles and the people who played them.

1. Young Dick Whitman (Brandon Killham) -- "Mad Men"
On a hit television show renowned for its brooding sexiness, Killham broods aplenty but gets to participate in almost none of the sexiness, as he portrays Don Draper before the suited-up lothario ever comes into his own. Adding insult to innocence -- as if the Moe Fine bowl haircut isn't enough -- how much does this kid have to hear that he doesn't actually look anything like John Hamm?<

2. The Mother (Cristin Milioti) -- "How I Met Your Mother"
It's true, I did wait eight seasons for the resolution to this show's titular puzzle. So why did I miss when the Woman Who Would Be Ted Mosby's Baby-Mama was revealed? Why are most of this season's episodes piling up on my DVR unwatched? Because, in this humble critic's opinion, "HIMYM" has experienced the single worse decline in quality of any sitcom since, I don't know, "The Loop" completely abandoned funny in its second season. (And this is coming from someone who stuck it out through "Scrubs 2.0.") So, yes, I feel bad that after so many guest stints and possible mothers came and went, Milioti scored the job long after it really mattered.

3. Andy Brooks (John Cho) -- "Sleepy Hollow"
Arguably the most famous actor in the show's premiere episode, Cho dies almost immediately in a most horrific manner, which is then shown over and over again like some viral video of a ball-busting skateboard incident. Meanwhile, Cho spends the rest of the season as a pathetic, rubbernecked zombie doing creepy, dark minion chores and secretly, hopelessly pining after the female lead. The "Sleepy Hollow" Wiki says, "Brooks is currently being used by Moloch as the Headless Horseman's necromancer." That sounds a lot more glamorous than it looks.

4. David Rosen (Joshua Malina) -- "Scandal"
Not since "ER's" Dr. "Rocket" Romano suffered not one, but two freak helicopter accidents -- one fatal -- has a second-tier character in a drama had so many injustices gleefully heaped upon him by coldblooded writers. The put-upon district attorney has been fired, deceived, defamed and publicly embarrassed. Even though he seems to have revived his career and found love, it's quite clear to anyone watching that his sneaky, gladiator girlfriend Abby Whelan (Darby Stanchfield) is far more enamored of her employer Olivia Pope (Kerry Washington) than she is of him.

5. Winston (Lamorne Morris) -- "New Girl"
Morris replaced Damon Wayans Jr. after the pilot episode and, for two seasons, struggled to carve out an identity for the undercooked Winston while surrounded by the show's bigger, funnier, more realized characters. After finally coming into his own -- albeit as an aimless, whimpering, cat-loving layabout -- Winston now has to contend with the return of the previous black guy, as Wayans returned to the series this past fall.

6. Capt. Ray Holt (Andre Braugher) -- "Brooklyn Nine-Nine"
So what if this sitcom has been a surprise success for Fox? Braugher's dry, gay precinct head may actually be the show's funniest component. But I can't watch the brilliant actor without thinking back to "The Last Resort," a taut action thriller with a cheesy title that aired on ABC a season ago and was cut short way before its time. That show seemed big enough for Braugher's considerable acting chops. "Nine-Nine" does not.

7. Drunk Uncle (Bobby Moynihan) and Jacob the Bar Mitzvah Boy (Melissa Bayer) -- "Saturday Night Live"<
Both pretty funny as far as Weekend Update correspondents go. Unfortunately, as the strongest of the bunch, these two single-joke caricatures have the unenviable task of filling the void left by Bill Hader's breakout Stefan -- another single-joke caricature, of course. But unpredictable crack-ups were written into the effeminate party prince and Hader's ability to milk this sole gag for big laughs seemed boundless. (Kenan Thompson is nice with his Barkley, too, but the bit doesn't work as well for seasonal topics as do Jacob or Uncle.)

8. Detective Marcus Bell (Jon Michael Hill) -- "Elementary"
Up until very recently, Detective Bell's primary responsibilities in the New York Police Department seem to have been to voice unsolicited, unwarranted skepticism about Sherlock Holmes' wildly successful sleuthing techniques and to receive and relay completed lab reports via text message. However, as a result of Holmes' rare negligence, Bell was severely wounded in the penultimate episode of the year and is likely to never hold a gun again. A cryptic scene in the last episode hints that Bell will either join some sort of shadowy anti-terrorist organization or be written off the show forever.

9. Ed Brooks (David Denman) -- "Parenthood"
Hey, remember the guy who stood in the way of Jim and Pam's destined love affair for the first couple of seasons of "The Office" -- Pam's chubby,  insensitive boor of a fiancé? Guess where he's been lately? He's a little heavier, a little scruffier, and -- thankfully -- a lot more charming, but David Denman is once again the monkey wrench thwarting heart-wrenching love. This season, affable Ed Brooks came between Julia and Joel, an otherwise solid couple, during the worst time in their marriage. It was a race to see who would turn one of the marrieds' heads first, Ed or Joel's sexy British employer, Pete (Sonya Walger). Ed won. And the prize is ... well, just wait until the series returns in January.

10. Patrick (Vincent Martella) and Nick -- "The Walking Dead"
Admittedly, playing dead on this show is always pretty thankless -- an actor is lucky if he's in close-up during a stake to the head. But these two walkers at least had names. Patrick even started out alive, if a bit annoying! Though he died and turned an episode or two in, Martella can at least say that his reanimation was the twist on which a great part of this exciting season hinged. Poor Nick (there's no way I'm digging through credits to find this extra's name) was unceremoniously rekilled  after having been fed mice by an unseen figure in the darkness. The mystery of his vermin patronage has yet to be solved.