The New York Times is dead wrong about drug addiction

The paper of record's insensitive approach only reinforces destructive stigmas 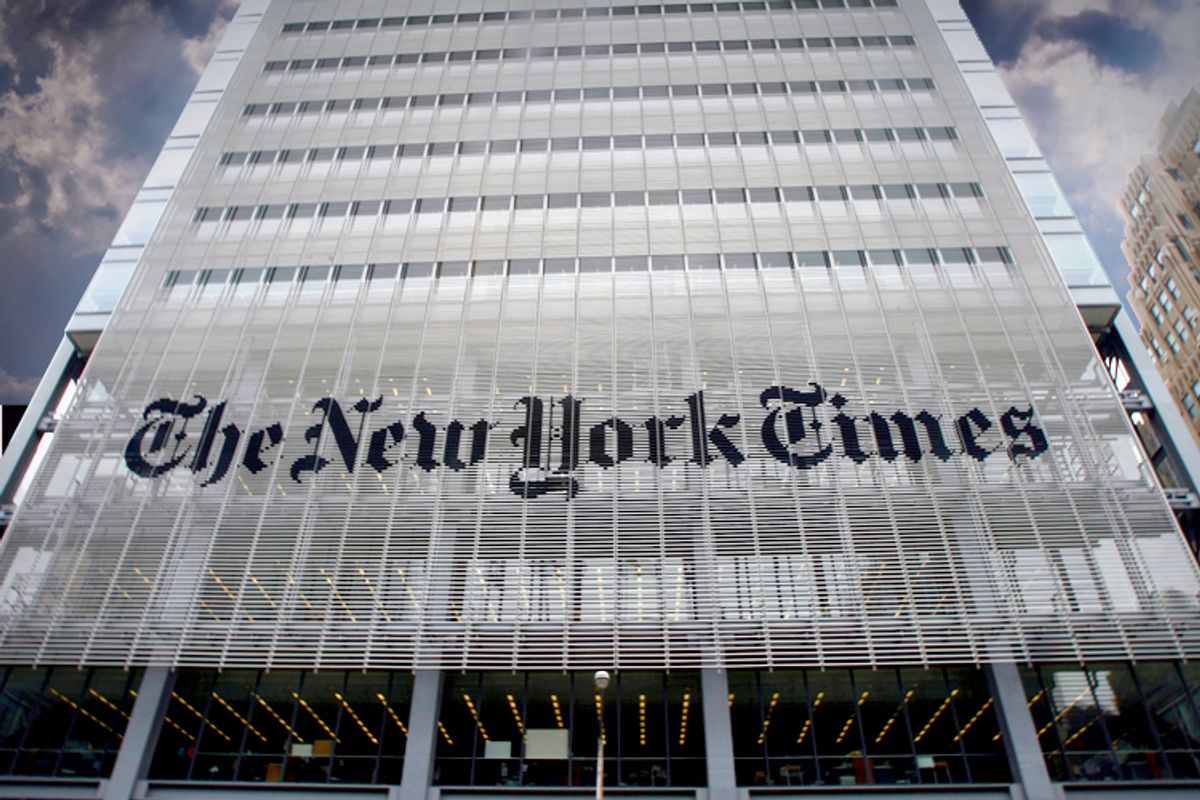 In a two-part series for the New York Times last month, Deborah Sontag wrote about buprenorphine, a medication used (mostly in the form of Suboxone) to treat opiate addiction through replacement therapy. The piece was presented as a dramatic exposé, with the flashy headline: "Addiction Treatment with a Dark Side."

But Sontag missed the mark by ignoring the concept of harm reduction and relying on the outdated view of addiction as a moral failing. Her politically correct language conceding that addiction is a “disease” is belied by descriptions of patients “cheating” on their treatment — um, we call it “relapsing” — plus an emphasis on the black-market distribution of the opiate substitute and a lack of attention to the real-world effects of drug use.

Then last week, Andrea Elliott wrote a well-intentioned five-part series for the Times profiling a homeless girl named Dasani living with her family in a Brooklyn shelter. Hidden in this highly-trafficked piece was even more demoralizing language about drug users, a population already besieged by stigma. Dasani’s parents are on opiate-replacement therapy — in their case, methadone, not the newer Suboxone. Rather than explore the positive correlates of the treatment for Chanel and Supreme (Dasani’s parents), Elliot writes dismissively that their treatment has merely “become a substitute addiction.” This language echoed Sontag’s earlier description, that “Buprenorphine has become both medication and dope.”

People struggling with opiate addiction are more than familiar with that disparaging sentiment. At the community mental health clinic where I work in Greenfield, Mass. (a hotspot of opiate use), clients on opiate-replacement therapy struggle daily with feelings of shame that their recovery "doesn't really count." They fear they are not really “clean.” That kind of shame is exactly what can (and does) lead to relapse.

But in spite of the stigma and shame, I also hear clients tell me about a plethora of positive outcomes that result from their treatment, none of which were highlighted by Sontag. She missed how, especially at this time of year, clients are relieved to have money (which they were once spending on heroin or expensive painkillers) to buy winter clothes for their kids. They're also grateful to no longer be at risk at risk for HIV, Hep. C, and abscesses — diseases and infections that drug users contract through sharing needles or having unprotected sex in exchange for drugs. Lastly, these clients know that they are no longer at risk of overdosing during unmonitored drug use. (Two people die from opioid overdoses every day in Massachusetts, more than the number that die from car accidents.) Though Sontag may say that buprenorphine is “dope,” there are crucial differences between the two in ways that matter to the people actually involved, like money and safety from life-threatening disease, not to mention risk of arrest and incarceration.

Plus, buprenorphine is very unlikely to cause impairment. Yes, it's a “drug,” like all medications are — newsflash: they mean the same thing — but a person can be in complete recovery from addiction and still take it. As Maia Szalavitz explains:

Addiction is not physical dependence on a drug. If it was, we'd have to consider all diabetics as "insulin addicts" and people who need antidepressants long-term as "antidepressant junkies." Instead, psychiatry defines addiction as compulsive use of a drug despite negative consequences. If the use isn't compulsive and the consequences are positive, the addiction has been resolved even if the physical dependence remains.

In hyping up the “black market” and “misuse and abuse” of buprenorphine, Sontag doesn’t acknowledge that the market is largely driven by lack of access to the very same treatment. I see clients who started out buying Suboxone on the street from their peers, and using it correctly until they could get into official treatment. Some clients also start out buying Suboxone on the street because they're too ashamed to be seen going into the clinic; it's a small town. For me, as well as other health care workers and activists who are actually in the field, it’s clear that reducing stigma around addiction treatment, not increasing it, is the way to save lives.

In the future, it would be better for journalists writing about addiction treatment to at least explain the thinking behind harm-reduction approaches like Suboxone. They can agree or disagree with that thinking, but to ignore it seems at best ignorant, at worst willfully misleading.

Harm reduction, as explained by groups like the Harm Reduction Coalition, is based on an acceptance that drug use is part of our world. Its proponents choose to work to minimize the harmful effects of drug use (like HIV, Hep. C, addiction and incarceration) rather than simply condemn it as immoral in and of itself. Harm reduction proponents also accept that drug use happens in the real word, where it intersects with inequalities like systemic racism and poverty. Yet, just as the long article ignores diseases that drug users are at risk for, there’s no mention in the piece of the ways that race and class intersect with drug use: Two-thirds of people incarcerated for drug offenses in state prisons are black or Latino, although these groups use and sell drugs at similar rates as whites. A black male is sentenced to a prison term  that is, on average, 20 to 50 times longer than that of a white male convicted of the same drug crime. And class matters too, of course. As Ethan Nadelmann, director of the Drug Policy Alliance, has said, "Wealthy people who struggle with addiction often can deal with it in a private setting. Poor people can often only access treatment through the criminal justice system.” Like many treatments, Suboxone may be imperfect, but why ignore the benefits, like its potential for keeping members of vulnerable populations out of jail?

Harm reduction is all about erasing the idea that addiction is a moral failure — that people addicted to a drug are “dirty,” while other people are “clean” — and taking a public health perspective that focuses on what can actually save lives and lessen damage to families. The first step is encouraging and supporting people who are getting any kind of help, not making them feel worse for it. As my client who takes Suboxone recently said to me: "Why can't it be a good thing to tell people I'm in recovery? Instead, I have to hide it."

I really hope she doesn’t read The New York Times.

Sarah Beller has written about addiction and harm reduction for The Fix. Her writing can also be found at The Hairpin, The Toast, Psychology Tomorrow and other publications.