"The Trip to Echo Spring": Great writers, getting drunk

A gifted critic explores the links between literary genius and alcoholism 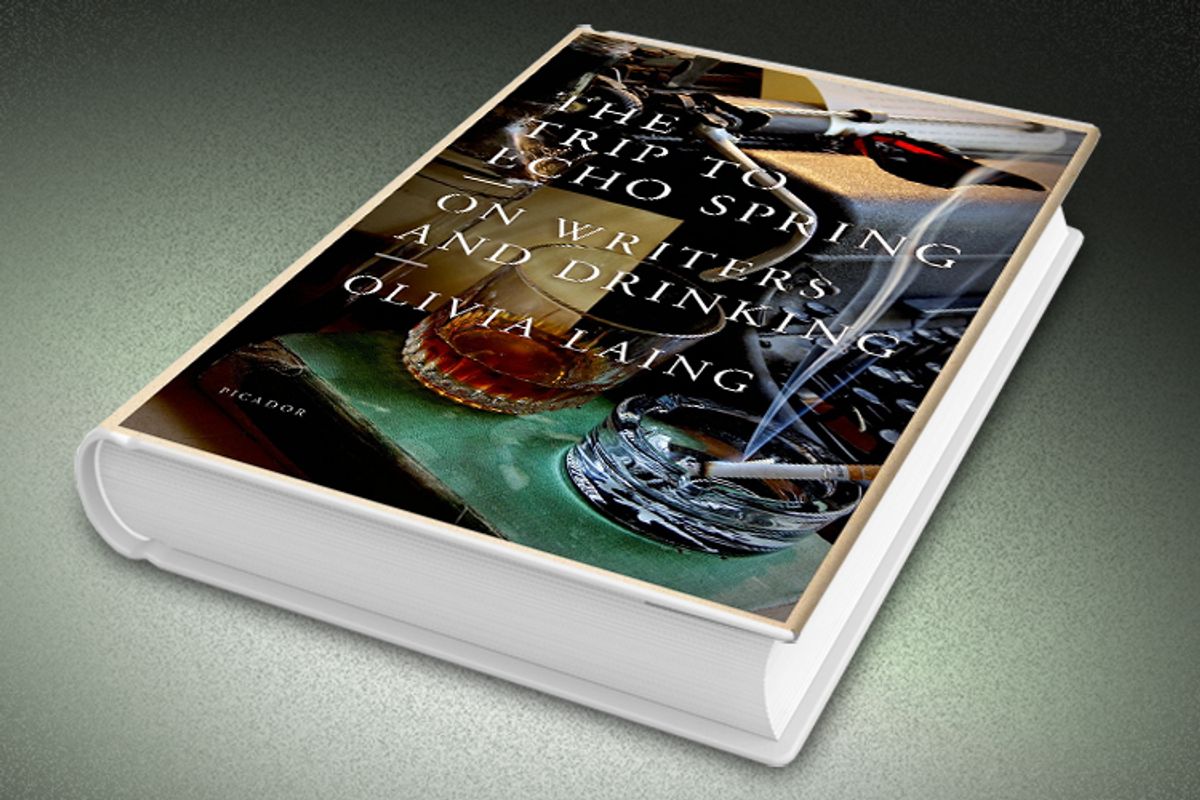 John Cheever, after an afternoon spent reading about the ruination of F. Scott Fitzgerald's life by alcohol, wrote "I am ... one of those men who read the grievous accounts of hard-drinking, self-destructive authors, holding a glass of whiskey in our hands, the tears pouring down our cheeks." Cheever's not alone in that, and so a reader might be excused for approaching Olivia Laing's "The Trip to Echo Spring: On Writers and Drinking," with trepidation, thinking it might turn out to be devoted to provoking such weepy scenes.

It's not, and furthermore, I can attest that "The Trip to Echo Spring" is a rewarding book to wend your way through even if the writers Laing focuses on -- Cheever, Fitzgerald, Hemingway, Tennessee Williams, Raymond Carver and the American poet John Berryman -- aren't among your particular favorites. Laing writes a fluid, fertile nonfiction aptly suited to the waterways that have been one of her persistent themes; her first book "To the River: A Journey Beneath the Surface" was about the Ouse, in which Virginia Woolf drowned herself. Like "To the River," "The Trip to Echo Spring" is a sort of travel narrative, one in which Laing, who is British, journeys to the American places where her writers got drunk and sobered up. "By traveling through them in sequence," she explains in her first chapter, "I thought it might be possible to build a kind of topographical map of alcoholism, tracing its developing contours from the pleasures of intoxication through to the grueling realities of the drying-out process."

This geographical analogy never feels especially firm, but it's hard to resent its imposition when Laing summons up a sense of place so ravishingly. Dipping her hands in a creek near Carver's home in Port Angeles, Wash., she winces. "It had come straight of the mountain: snowmelt, old ice, clear and astringent as gin." A pair of bald eagles in flight resemble "a coat thrown into the air, ragged and enormous." Among the locales Laing takes in are: the New York City hotel where Williams died, choking on the cap of an eye-drops bottle; New Orleans, where he found his greatest portion of happiness; Key West, where she looks around Hemingway's museumized house and contemplates the links between alcoholism and a love of the water; the Midwest, viewed through the windows of a train Laing took through it and where most of these authors lived at least for a while; and finally to Port Angeles.

As for Laing's own interest in alcoholism, she traces it back to a period, between the ages of 8 and 11, when "alcohol seeped its way into my childhood, beneath the doors and around the seams of windows, a slow, contaminating flood." Her mother's partner, Diana, became increasingly prone to bitter, ranting binges, one of which finally culminated in a visit from the police, the confiscation of the family's air rifle and the decampment of Laing, her mother and her sister to a new house in another town. Although Laing isn't an alcoholic herself, she alludes to several adult relationships blighted by the disease, and her second-hand understanding of it is manifestly detailed and deep.

The danger of contemplating great writers who were also problem drinkers lies in what Laing calls "the honey-trap of romanticism," the same propensity that had Cheever crying over Fitzgerald's pickled brilliance. According to this mythos, great artists are drawn to booze because it takes the edge off their acute sensitivity and the exceptional intensity with which they encounter life and its inevitable losses and suffering. On the other hand, drinking "well" -- that is, ecstatically and boldly -- meshes with a callow vision (particularly common among fans of beat poetry) of the reckless, raw-nerved and extravagant life experiences supposedly required to produce great work. (Tell that to Emily Dickinson.)

Laing claims to be avoiding this tendency, but not always persuasively. When she explains that she's steered clear of writing about women writers because "for reasons that will become apparent, their stories came too close to home," it's hard not to wonder if it's also because women drunks are so much harder to glamorize. A male alcoholic writer -- in the right light, if you squint -- can be conceived of as tragic and therefore magnificent, but a drunk woman, with her contemptibly unfeminine loss of self-control, is nothing but a pathetic, sloppy mess.

Still, it's a juggling act, exhibiting these six writers at their very worst, as they abuse wives, neglect children, seduce students, break furniture, collapse in the street and lose control of their bowels, all while sustaining the reader's belief that some insight can be gained from their degradation. But Laing pulls it off, musing over their universally miserable childhoods -- full of suicidal fathers, controlling mothers, economic insecurity and longings for escape -- and such recurrent themes as anxiety, insomnia, inhibition, lying, denial, the obliteration of memory, the faltering struggle of recovery and the grace achieved by the two men (Cheever and Carver) who were able to stay sober. Williams coaxes a large, soft compassion from her, while Berryman's inability to summon the humility required by the Alcoholics Anonymous program inspires an awed horror: "Why did a man of such prodigious intelligence, such gifts, return over and over to a substance that was destroying the fabric of his life?"

Another powerful draw of "The Trip to Echo Spring" is the flashing imagination of Laing's literary criticism. She makes shrewd biographical analogies, such as linking Hemingway's highly-developed packing skills, "stowing the things he needed on his travels in the most elegant and ingenious of ways," with his ability to fill "his fictions up with more than you'd think they'd bear." She's radiantly good at writing about the web of Cheever's life and work, the way that, for this once-poor kid trying to pass as a bred-in-the-bone WASP, "drinking is not about anything so vulgar as gratifying an appetite, but rather part of an elaborate social code, in which the right thing done at the right time conveys a near magical sense of belonging." She perfectly characterizes his books as resembling "in their discontinuity dreams: dreams in which one passes by a succession of lighted rooms, each containing a tableau at once inexplicable and alluring."

Laing comes to these writers hoping to understand better the workings of alcoholism, buried as they are beneath the disease's seemingly infinite layers of pretense, deflection and deceit. As writers, the men ought to be able to articulate these mysteries, but even the most brutally honest among them, Carver, indulges in the occasional misdirection. The paradox of fiction is that through "lying" (concocting stories), a gifted writer can convey truths not always accessible to a presentation of facts. But lies -- made to others but most especially made to themselves -- are also alcoholics' most essential tool in evading the truth about their situation. The writers Laing contemplates in "The Trip to Echo Spring," engaged in a perpetual dance of revelation and concealment, truth and lies, more often than not unable to tell the difference themselves.

It's not a formula for arriving at either answers or enlightenment, but then again, what more do any of us, including Laing, really need to know about this all-too-familiar disease? There's a despairing stasis to it that belies Laing's journey conceit, even if getting there makes for a wondrously rewarding book. The fragile miracle of recovery seems by far the more enigmatic phenomenon; Cheever, who once couldn't face the day without a bottle of scotch, chose not to drink again even when he was dying of cancer and had been assured by his doctors that it didn't really matter. "Sobriety doesn't necessarily mean a new character;" Laing writes, "rather a slow sea change of spirit." That's the trip that never fails to astonish.