Maybe we haven't seen many rock blockbusters this year. But the genre's still thriving in its less-central position 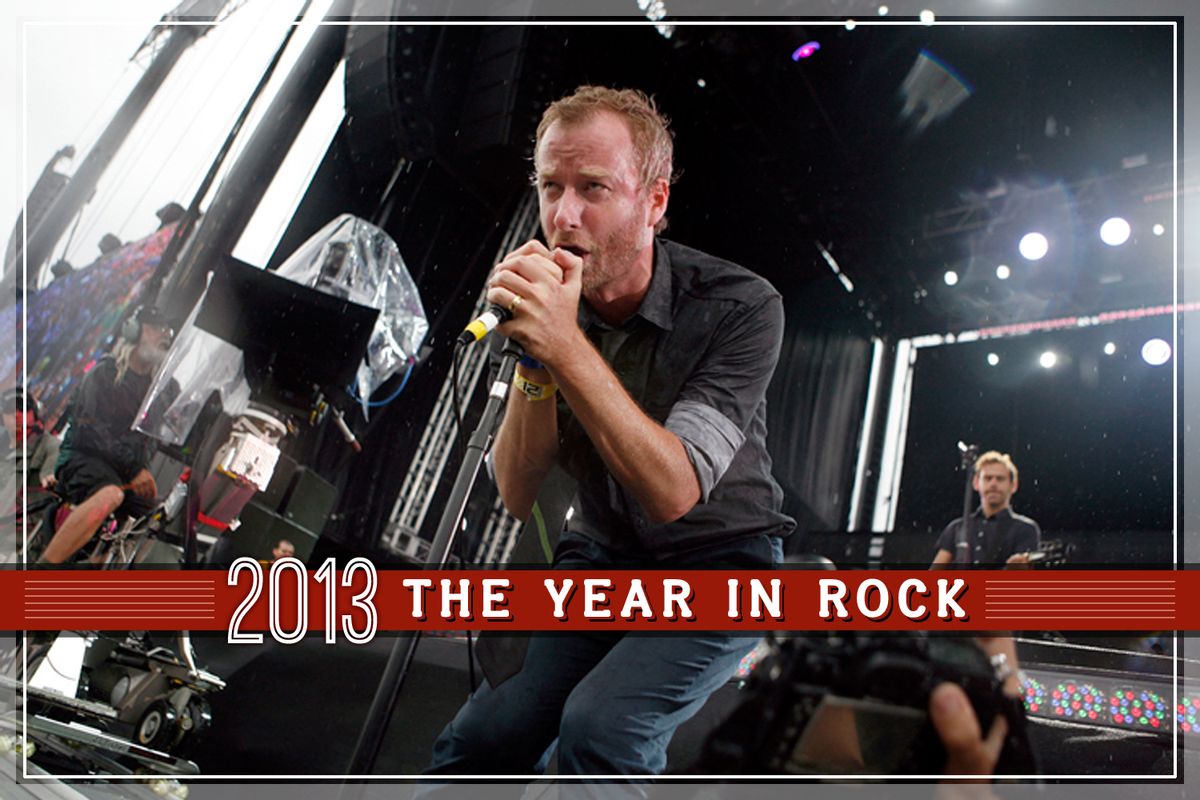 Searching for rock music on Billboard’s Hot Rock Songs chart is an odd exercise in futility. The No. 1 song in the country, Lorde’s “Royals,” has dominated the rock chart for 12 weeks, spending another six weeks at the top of Alternative Songs. Aside from Paramore, Arctic Monkeys and the Neighborhood, most of the tracks on the Rock Songs list can only be called rock if you're being charitable. Capital Cities’ “Safe and Sound” is more in the EDM tradition and Imagine Dragons’ debut record was marked for its genre-hopping, the way the band blended a wide variety of musical styles to appeal to the broadest possible audience. It’s less rock ‘n' roll than musical goulash, and Lana Del Rey isn’t rock at all. She’s a trip-hop Nancy Sinatra.

People who have long been predicting the death of rock music will have no difficulty finding evidence to support that thesis. Aside from niche rock stations, emerging rock artists don’t get the kind of airplay or attention that they used to a decade ago, when critics credited the White Stripes for saving rock ‘n' roll. The Stripes’ “White Blood Cells” debuted in 2001, a year when momentum seemed to be shifting toward other genres. 2001 was dominated by pop-tinged R&B -- between Alicia Keys’ ubiquitous breakthrough hit, “Fallin,” the Janet Jackson comeback and the rise of Jennifer Lopez. The rock songs that were popular catered to an adult contemporary crowd -- with acts like Dido, Train and Uncle Kracker selling the '90s coffeehouse to suburban soccer moms.

Although “White Blood Cells” flopped initially, the album quickly turned into a cultural phenomenon. It’s hard to underestimate the impact of the Stripes. Hip-hop would continue to enjoy its stay in cultural prominence throughout the decade, but in 2003, albums like Outkast’s genre-bending “Speakerboxx/The Love Below” were joined by a staggering number of notable rock releases. 2003 saw the Strokes’ “Room on Fire,” the Postal Service’s “Give Up,” Radiohead’s “Hail to the Thief,” Yeah Yeah Yeahs’ “Fever to Tell,” the Shins’ “Chutes Too Narrow,” Death Cab for Cutie’s “Transatlanticism” and killer work from My Morning Jacket, Fountains of Wayne, Drive-By Truckers, the Rapture, Cat Power and the New Pornographers. And the Stripes themselves released “Elephant,” a chic pick for album of the decade.

At first glance, these past few years feel a lot like 2000. In 2012 and 2013, the albums getting the lion’s share of attention included releases from Kanye West, Frank Ocean, Daft Punk, Kendrick Lamar and Disclosure. Jack White moved on to more of a bluegrass sound, branching out from the genre he helped redefine, and even the bands who were big in 2003 lend a prevailing sense that rock is on life support. Outkast broke up, and Big Boi has been staying away from his rock influences ever since. The latest records from Yeah Yeah Yeahs, the Rapture and Death Cab for Cutie have all been their worst, and like TV on the Radio, My Morning Jacket were never the same after they embraced prog rock and got weird.

As is the case with Jack White's solo work, many of these bands have been eager to experiment with a new sound as the musical landscape changes, embracing trends like electronica, but rock itself has yet to discover a new paradigm.

Nearly every year there are critics proclaiming the genre dead, but rock more likely is undergoing an identity crisis in an industry where it’s no longer king. Bands like U2 used to control the music universe, winning wide critical acclaim and selling crates of records, but in 2013, that brand of band is all but extinct. The closest we have today is Coldplay, whose last record was surprisingly heavy on pop and R&B. While Arcade Fire is bigger than ever, their newest album, produced by LCD Soundsystem’s James Murphy, feels closer to "Sound of Silver" than "The Suburbs." Just as these acts have the ability to ascend the throne, it feels as if they are abdicating rock royalty. When you look at what happened to Nirvana or Fleetwood Mac, you can understand why they didn’t want it.

Music must adapt to survive, and rock isn’t alone in struggling to figure out what’s next. The industry itself is struggling too. In 2011, Steven Hyden of the Onion A.V. Club argued that the year saw a number of good albums released -- but no “important” ones. According to Hyden, an “important album” is “an album that is perceived to be a momentous work of ambition, invention, and high artistic credibility before it is released, and then proves to actually be so, planting itself in a highly visible place in the culture and acting as a signifier for the year in retrospect.” Hyden writes, “It's the one album you can't avoid hearing about at the end of the year to an almost annoying degree.”

This is an album that commands attention on the level of Animal Collective’s “Merriweather Post Pavilion” or Kanye’s “My Beautiful Dark Twisted Fantasy.” Other than Animal Collective or The White Stripes, it’s difficult to remember the last time we had a definitively great rock record, one that fits Hyden’s definition of “changing the game.” But Hyden shows that’s a larger music problem, where critics can agree on a pool of the best albums of the year, but there’s often little agreement on which record is the best. This year, Kanye’s “Yeezus” will be a likely consensus pick, topping the most year-end lists, but many critics didn’t even consider it his finest work. It was just the best album that also happened to be enormously popular, a throwback to when good music could still sell, but hardly the definitive album of this or any year.

However, that doesn’t have to be a bad thing, and for rock ‘n' roll in particular, a lack of definitive work might just be the genre’s liberation. It takes the pressure off. In 2013, rock music thrived on the margins. Savages released one of the best rock debuts in recent memory in “Silence Yourself,” and “Trouble Will Find Me” showed the National to be the most dependable band in music. Deafheaven’s “Sunbather” was the finest metal record of the decade so far, even if it was too experimental for wide consumption, and the Knife continued to delight and confuse us. David Bowie and My Bloody Valentine proved that time has had little effect on their enormous talent, and Queens of the Stone Age and Vampire Weekend only got better with age.

In particular, “Modern Vampires of the City” was an odd move for a band on the verge of superstardom -- more recessive and light than 2010’s “Contra,” which sonically bit off more than it could chew. “Contra” was the work of a band working to prove they were the biggest indie act in America by doing more. It wasn’t the leap into grand excess and superficiality that Weezer’s much-maligned “Make Believe” was, but “Contra” felt like a band trying too hard. By going small instead, Vampire Weekend made their most resonant work, tunes that show off their eclectic ideas while staying true to the spirit that made the band good in the first place. “Step” might not be an anthem on the level of “Smells Like Teen Spirit,” but it’s not trying. It’s one of the year’s best songs -- because it plays by its own rules.

We do lose something when we have few Great Rock Bands and Important Albums. It’s hard to replace that feeling of a record tapping into our musical consciousness, where it all feels like we’re tuned into the same song at the same time. It makes you feel plugged into society, less alone in sharing this cultural moment with other people. But as the digital age expands the amount of choices we have and the definition of what rock is, we will have to search harder to find that elusive Great Album. That feeling of connection will be increasingly rare and elusive, but it will mean more when we finally find it. In focusing less on what’s objectively “great” and what means something to us, we are reminded of why we started listening to rock music to begin with.

By dying, rock music might just survive after all.