What would Keynes do? How he'd address today's American economy

To fix this struggling economy, here's why he'd want investments in infrastructure, education and healthcare 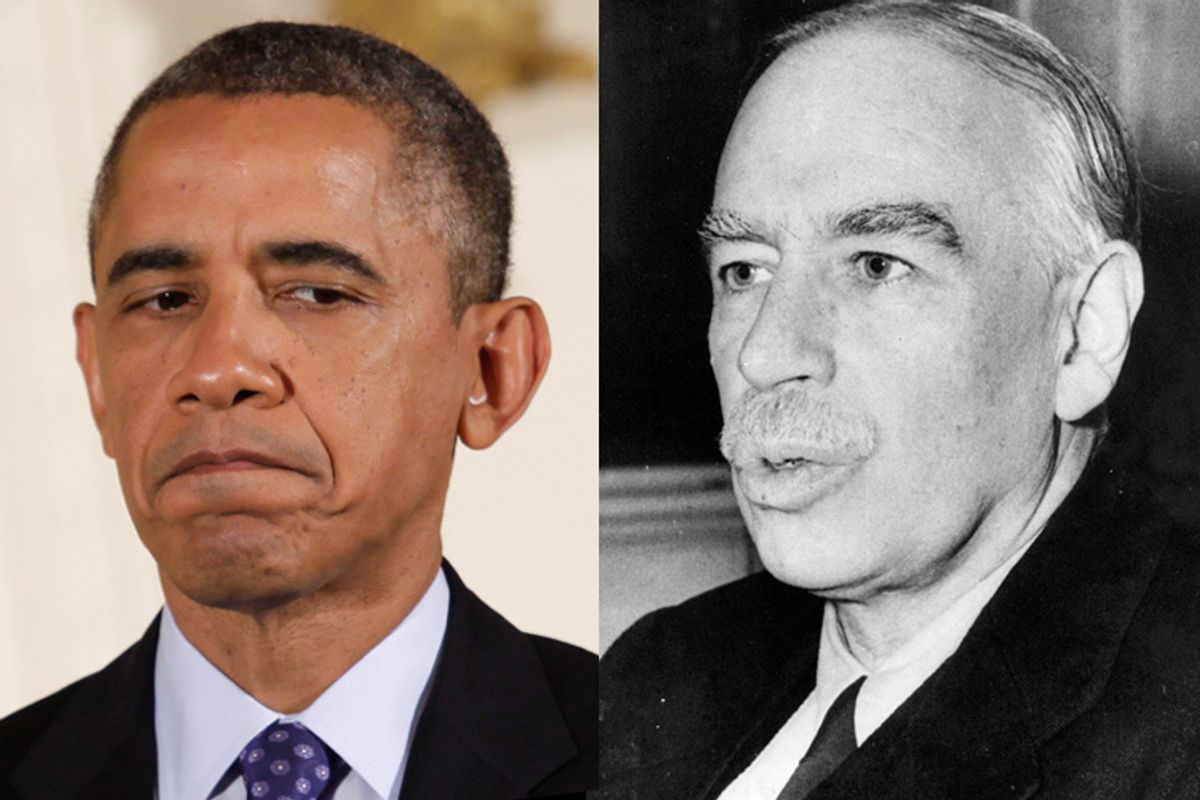 “Secular stagnation” is the term that the American economist Alvin Hansen coined to describe a situation of permanent underperformance by an anemic economy in a 1938 paper, “Economic Progress and Declining Population Growth.” According to Hansen, before the Great Depression began with the stock market crash of 1929, U.S. economic growth had been driven by a combination of productivity, frontier settlement and population growth.  "[F]or our purpose we may say that the constituent elements of economic progress are (a) inventions, (b) the discovery and development of new territory and new resources, and (c) the growth of population. Each of these in turn, severally and in combination, has opened investment outlets and caused a rapid growth of capital formation."

But the frontier had long since closed, population growth was slowing, and technological productivity growth by itself might not be able to deliver anything like previous growth rates.  According to Hansen:  "We are thus rapidly entering a world in which we must fall back upon a more rapid advance of technology than in the past if we are to find private investment opportunities adequate to maintain full employment.”

The problem of our generation is, above all, the problem of inadequate private investment outlets. What we need is not a slowing down in the progress of science and technology, but rather an acceleration of that rate. Of first-rate importance is the development of new industries. There is certainly no basis for the assumption that these are a thing of the past. But there is equally no basis for the assumption that we can take for granted the rapid emergence of new industries as rich in investment opportunities as the railroad, or more recently the automobile, together with all the related developments, including the construction of public roads, to which it gave rise.

Like his contemporary Joseph Schumpeter, who coined the terms “creative destruction” and “industrial mutation,” Hansen observed that technological progress is not continuous and predictable, but unpredictable and based on occasional transformative technologies like the steam engine, the internal combustion engine and (shortly after Hansen wrote) the transistor:

Nor is there any basis, either in history or in theory, for the assumption that the rise of new industries proceeds inevitably at a uniform pace. The growth of modern industry has not come in terms of millions of small increments of change giving rise to a smooth and even development. Characteristically it has come by gigantic leaps and bounds. Very often the change can best be described as discontinuous, lumpy, and jerky ... And when giant new industries have spent their force, it may take a long time before something else of equal magnitude emerges. ...[A full-fledged recovery] calls for something more than the mere expenditure of depreciation allowances. It requires a large outlay on new investment, and this awaits the development of great new industries and new techniques. But such new developments are not currently available in adequate volume ..."

Hansen’s musings were largely forgotten after World War II, because of the postwar economic boom and the baby boom.  In 1985, the free-market conservative economist George Stigler of the University of Chicago sneered that Hansen’s reputation would “never regain its onetime prominence” and that fear of secular stagnation was a “fad.”

Today, however, it is the free-market utopianism of Stigler, Milton Friedman, and other libertarians and conservatives that appears to have been a fad, dominating academic economics and public policy from the 1970s to the Great Recession. In a talk to the IMF, former Treasury Secretary Larry Summers recently raised the possibility that Hansen was on to something when he speculated about secular stagnation (coming from a well-known neoliberal like Summers, this was the equivalent of the pope speculating that maybe Muhammad really was the Seal of the Prophets).

It is possible to tell a radically revisionist story of the U.S. and world economies since the end of World War II.   In this revisionist take on history, secular stagnation was temporarily averted, again and again, either by bursts of public and private innovation in new technologies (the tech bubble of the 1990s), bouts of massive public investment (the “military Keynesianism” of the Cold War, the rebuilding of the war-torn nations of Europe and Asia, the U.S. interstate highway system build-out, the government-directed investment in export-oriented industries in East Asia) or consumption and asset bubbles fueled by consumer debt or tax cuts (like the U.S. housing and stock market bubbles that helped trigger the Great Recession).  Even if they lasted as long as a decade or a generation, it might be argued in this alternate history of the last half-century, these episodes of investment-driven or consumption-driven growth were “sugar highs” that postponed the chronic tendency of industrial capitalism to stagnation.  The question is whether, absent unpredictable frenzies of investment in new technologies or new and unsustainable asset bubbles, the U.S. and world economies are doomed to slow growth and high unemployment.

Hansen believed that fiscal policy — tax cuts and/or higher public spending, for example, on infrastructure — could temporarily counteract the tendency toward economic stagnation.  Here he agreed with John Maynard Keynes (and in fact Hansen became an enthusiastic promoter of what came to be known as Keynesianism).  But neither Hansen nor Keynes believed that permanent stimulus was an adequate solution to perpetual stagnation.

Consumption may be strengthened by the relief from taxes which drain off a stream of income which otherwise would flow into consumption channels. Public investment may usefully be made in human and natural resources and in consumers' capital goods of a collective character designed to serve the physical, recreational and cultural needs of the community as a whole. But we cannot afford to be blind to the unmistakable fact that a solution along these lines raises serious problems of economic workability and political administration. ... Public spending is the easiest of all recovery methods, and therein lies its danger. If it is carried too far, we neglect to attack those specific maladjustments without the removal of which we cannot attain a workable cost-price structure, and therefore we fail to achieve the otherwise available flow of private investment.

Keynes agreed, calling public investment “first aid.”  In a 1945 letter to the poet T.S. Eliot, Keynes wrote of the “three ingredients of a cure” — investment, consumption and leisure:

The full employment policy by means of investment is only one particular application of an intellectual theorem. You can produce the result just as well by consuming more or working less. Personally I regard the investment policy as first aid. In US it almost certainly will not do the trick. Less work is the ultimate solution. How you mix up the three ingredients of a cure is a matter of taste and experience, i.e. of morals and knowledge.

Earlier in May 1943, in “The Long-Term Problem of Full Employment,” Keynes had argued that reduced working hours and longer vacations, along with higher mass consumption, were preferable to wasteful and unnecessary investment in maintaining full employment:

It becomes necessary to encourage wise consumption and discourage saving,-and to absorb some part of the unwanted surplus by increased leisure, more holidays (which are a wonderfully good way of getting rid of money) and shorter hours.

It is often said that Keynes was wrong in predicting that workers in advanced industrial nations would prefer more leisure to more income.  But contemporary Europeans with six-week vacations and year-long paid child leave show no inclination to abandon these.  For their part, American workers have not been offered the options by employers or law of four-day workweeks, year-long paid child leave after childbirth or long paid vacations.

If we take the three-part cure proposed by Doctor Keynes seriously, what would it look like today?

The first part of the cure would be investment, both public and private, in growth-promoting infrastructure and R&D that could promote breakthrough technologies and new industries.  The fact that the U.S. has underinvested in infrastructure for decades would make this a high-return strategy, at least for a while.  Even the Republican economist Martin Feldstein agrees that the U.S. needs more fiscal policy in the form of more public investment:  “To get the economy back on track, President Obama should propose, and Congress should enact, a five-year fiscal package that would move the growth of gross domestic product to above 3 percent a year and focus on direct government spending on infrastructure.” Institutions like the proposed national infrastructure bank could “crowd in” private capital that otherwise lacks adequate investment opportunities.

What about the second part of the Keynesian cure for secular stagnation — greater consumption by the many, not the few?  The downsides of debt-driven private consumption have been brutally underlined by the housing, stock market, and student loan bubbles.  However, while Americans do not need more McMansions or shares of dubious businesses like Pets.com, many low- and middle-income Americans as well as the economy might benefit from a major expansion of consumption of healthcare and education.  But healthcare and education should be public enterprises or price-regulated private utilities, in order to prevent greedy providers — hospitals, pharma companies, doctors and universities -- from using their market power to gouge consumers and the government, as most have done for the last generation in the U.S.

The last ingredient of the Keynesian cure for stagnation might be the most controversial, at least in the U.S. — “increased leisure, more holidays … and shorter hours.”  But a shift from a goods-based manufacturing economy to a leisure-based services economy has long been underway in advanced industrial societies.  As technology lowers the prices of manufactured goods, shelter and transportation, individuals as well as entire nations tend to spend more on services, including luxury services provided by other people.  What were once upper-class luxuries, such as dining out in restaurants, tourist travel and even massages, become perks of the mass middle class.  Thanks to productivity growth, the typical worker of the future may be a nursing aide or restaurant waiter who works four days a week — long enough to afford a vacation trip or a weekend at the spa.  I have described this kind of egalitarian service economy — in which middle-class service sector workers buy and sell former luxury services to one another — as “service sector Fordism.”

A world of technologically produced abundance, in which consumption shifts, beyond a point of saturation, from manufactured products to quality-of-life services and amenities, many of them provided by the public sector, is very far from the neo-Dickensian capitalism promoted by Reaganites and Clinton-Blair neoliberals, in which citizens are exhorted to study longer, work more hours and take cuts in pay, all in the name of zero-sum “competitiveness”  on the part of individuals or nations.  But something like this was the vision of the second greatest progressive president in American history, in his 1965 State of the Union address — a vision of shared abundance and increased leisure that is more relevant than ever:

We worked for two centuries to climb this peak of prosperity. But we are only at the beginning of the road to the Great Society. Ahead now is a summit where freedom from the wants of the body can help fulfill the needs of the spirit ...

We want to grow and build and create, but we want progress to be the servant and not the master of man.