11 mistakes you don't want to make under the mistletoe 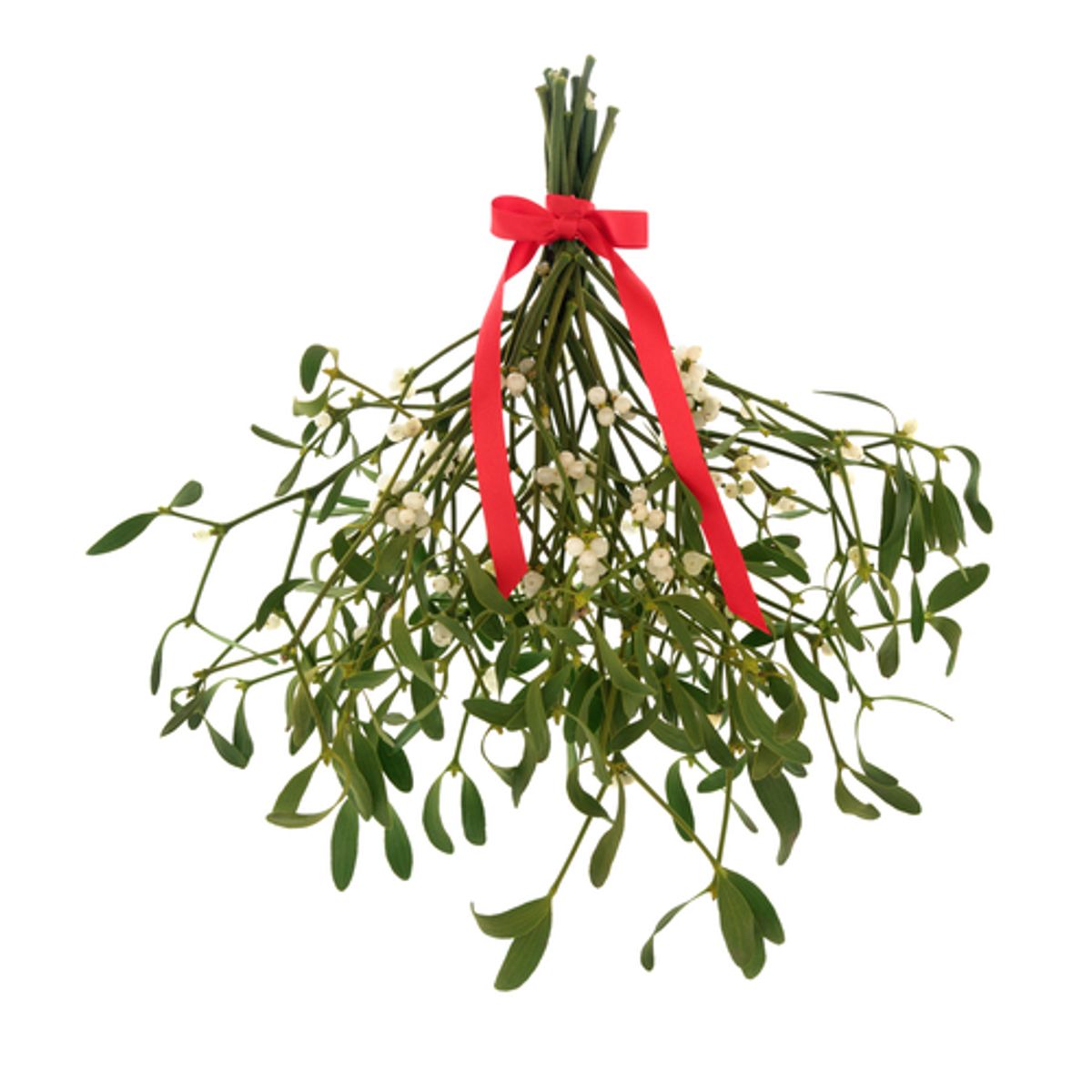 Let’s be clear: a meeting under the mistletoe isn’t the time or place for a bonk and a bit of how’s-yer-father. Usually, that stolen moment is only enough for a quick embrace and some pre-code, Hollywood stuff—one foot on the floor at all times, please. Tree-trimming may get you plugged in but if your family is stringing cranberries by the creche, you’ll want to keep things clean.

You may, however, find yourself at a party with a parasitic shrub hanging overhead and no one in sight but that hottie you’ve been eyeing up since you arrived. Here are some things to avoid as you satisfy your holiday cravings:

Eating Your Lover’s Face
I once made out with a guy who opened his mouth so wide that I feared for my hairstyle. He could have fit a navel orange, a Christmas cracker and a yule log in there. He was a handsome guy. His proportions were right and he smelled vaguely delicious but his mouth had come from another planet. The plant of terrifying mouths.

Years ago there was a commercial for the Reach toothbrush from Johnson & Johnson in which a guy had a “flip-top” head.  I felt like that when we were snogging.

If you need to eat your lover’s face to enjoy yourself, you should probably audition forThe Walking Dead or you might become a headline about bath salts. Which brings me to number two:

Ignoring the Signals
Picking up on your lover’s vibe is part of being a good maker-outer. Acquiring some sensitivity and a soupçon of generosity will make the whole thing more of a mutual experience.

I once made out with a guy who gave me instructions on everything from where to rest my hands during the embrace to the proper angle of my head (never mind that kissing at said angle would have required an appointment with my chiropractor.) He also complained that I kissed like his mother. I asked him when he had last kissed his mother and then I asked him to leave.

Cigarette breath
I’m not even going to discuss this. See also “Garlic.”

Head Grab, The
There’s no need to treat the back of my head like a panic button. Slamming your palm into my occipital bone is not going to launch missiles or shoot Santa up the chimney.

I once made out with a guy whose adorable-factor was in direct proportion to the amount of damage he did to my body when we were necking. One time, the clasp of his metal wrist-watch left a diagonal gash the length of my spine. Another time he (accidentally) drove his patella into my balls so hard I thought I would a need a prescription for AndroGel. Perhaps it was my fault: I should have known things were amiss with the unnecessary head grab on our first date.

Approach gently. If you grab too hard, you risk a bloody and/or painful collision that could:

If you feel resistance, it’s a clue that your lover is moving at a different pace. See also “Ignoring the Signals.”

Tongue + Ear = Wet Ear
Unless you know that your lover likes it, using your tongue like an anteater snout is about as sexy as a anteater snout. And you could bust an eardrum.

I once made out with a guy whose tongue went so deeply into my ear it made me think there was a candle shortage in his village. I’ve always made an effort to keep my ear canal wax-free. The same goes for tongues. Nibbling, licking, and gentle teasing are encouraged, but unless you are an otolaryngologist, I don’t want you in there.

Post-Dinner Syndrome
My open mouth is not a repository for your gastric mishaps.

I once made out with a guy who may have been in short supply of Beano. Kissing him was like hitting rewind on dinner because every time we went in for a grope and guzzle, I got essence of eggnog in my ethmoid sinuses.

Turn and blow when you feel the Rolaids giving up.

Remora Face
I’m not a host fish. Even in your wildest fantasies, I’m not swimming from Cuba to Key Largo, so stop sucking the air out of me.

I once made out with a guy who inhaled while he locked his lips over mine: this while he squeezed the back of my head made me feel like an emergency room apparatus.

Snake Tongue & Tense Lips
This is not a cartoon show on Adult Swim.

I once made out with a guy whose pursed lips felt like the embouchure of a failed trumpet player. And his twitchy tongue may as well have been forked the way it darted in and out of his tensely puckered lips. Kissing him was like putting your lips around a mole in a PVC pipe. The whole endeavor was so anxiety-provoking I thought of giving him my prescription to Xanax. Or a gift certificate for a session with my acupuncturist. A face full of acupuncture needles would have been less terrifying than the sensation of his tongue tasting the air like a rattlesnake on methamphetamine.

Believe me, no one wants to kiss a trumpet-playing rattlesnake on methamphetamine. At least not under the mistletoe.

Stubble
Stubble is sexy. Facial lacerations are not.

…And One More Thing
Making out should be fun.

I once made out with a guy who had so many rules about what you could and couldn’t do, I don’t think we ever got to the fun part.

Wait a minute… nevermind… just throw me down and kiss me.

Christmas Holidays How To Mishaps Mistletoe The Weeklings