After reporting the incident to a school official, she says she was told to "work it out" with her alleged rapist 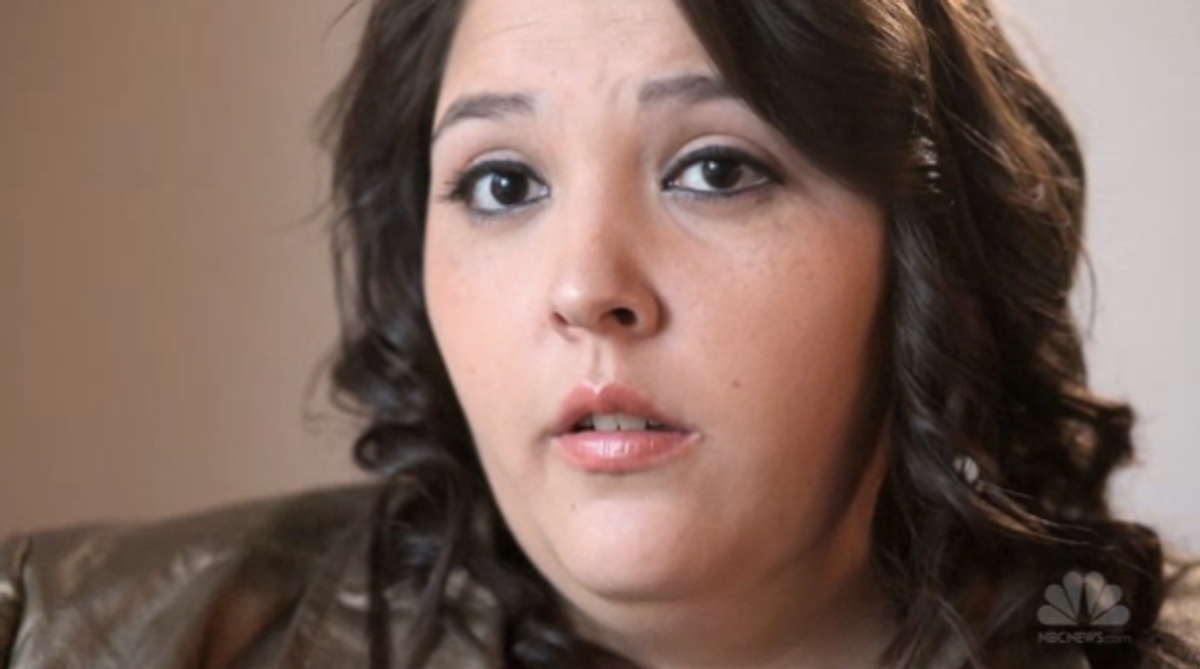 A young Texas college student is speaking out for the first time about being suspended for "public lewdness" after she reported being raped on school grounds to officials at her former high school.

In an interview with NBC News, Rachel Bradshaw-Bean recounted how in 2010 one of her male classmates asked her to go with him into the band room at Henderson High School, where she says he raped her.

Afterward, Bradshaw-Bean said, "I was crying. I pulled my pants up and went to the bathroom to clean myself up." She then went to the assistant band director to report what happened, but says she was told to "work it out" with her alleged rapist. "There's no way I would do that. But I didn’t know what to think. I was 17," she said.

News of the incident reached an assistant vice principal the next day, who sent Bradshaw-Bean to a health clinic where she was found to have lacerations and bleeding “consistent with information given per victim,” according to a medical report obtained by NBC. Bradshaw-Bean was interviewed at the clinic, but says she felt numb during the exchange. "I just felt like I couldn't cry anymore," she said. "I was just taking in so much."

Following the interview, police told Bradshaw-Bean's parents that they would not be filing charges.

"They said the sex was consensual. I was so shocked," Bradshaw-Bean's mother, Colleen Chevallier said. "I thought, they are pushing this under the rug. She's being treated this way because she's a female. I looked at my husband and said, 'Do they know women have the right to vote?'"

Henderson High School also refused to launch an independent investigation into the allegations as is required by law, instead opting to discipline Bradshaw-Bean and her alleged rapist for "public lewdness." Both were assigned to a disciplinary school for 45 days.

Chavellier, outraged by the school's actions against her daughter, tried to transfer her to another high school, but her request was rejected because of suspension. "They were treating the victim like a criminal," she said. "It was really like living in hell. If it hadn't happened to me — if someone else told me this story — I'd think it wasn't true."

Chavellier eventually took her daughter's case to the American Civil Liberties Union, which filed a Title IX with the Department of Education and succeeded in getting Bradshaw-Bean transferred to another school. "I thought, this cannot pass," Chavellier said of her decision to go to the ACLU. "I think everyone underestimated us."

As NBC reports, after going to the ACLU, the family learned that Bradshaw-Bean's experience was far from unique:

The problem, said Sandra Park, an attorney with the American Civil Liberties Union, is that educators don't necessarily know the rules. For instance, she said, the Title IX coordinator is often a school employee with other responsibilities who "just wears that additional hat" and doesn't have a firm grasp of the law.

The Department of Education's Office for Civil Rights said it has received 59 complaints that include Title IX allegations related to sexual violence this year, up from 33 such complaints in 2012. The complaints are from all educational levels, from elementary to postsecondary.

In one case similar to Bradshaw-Bean's, the office ruled last year that Forest Hills Central High School in Michigan had failed to properly respond when a girl said she was sexually assaulted in the band room. The parents say the principal had discouraged them from filing criminal charges against the boy, an athlete. (The family did file charges and the boy pleaded guilty, according to the National Women's Law Center, which is now working with the family on a suit against the school.)

A year later, the Department of Education ruled that Henderson High School had violated Title IX by failing to investigate the allegations, and retaliated against Bradshaw-Bean by sending her to a disciplinary school.

The school was given a 13-point plan for compliance with Title IX, including extensive staff training around rape and sexual assault, and was ordered to pay for counseling for Bradshaw-Bean.

The counseling helped, she told NBC; Bradshaw-Bean has re-enrolled in college and now plans to get her degree in criminal justice. She wants to use her experience to help others get the justice that was denied to her, she said. "I can help others facing injustice of their own."