This was a huge year for the gay rights movement. Who's in step with the times — and who's being left in the dust? 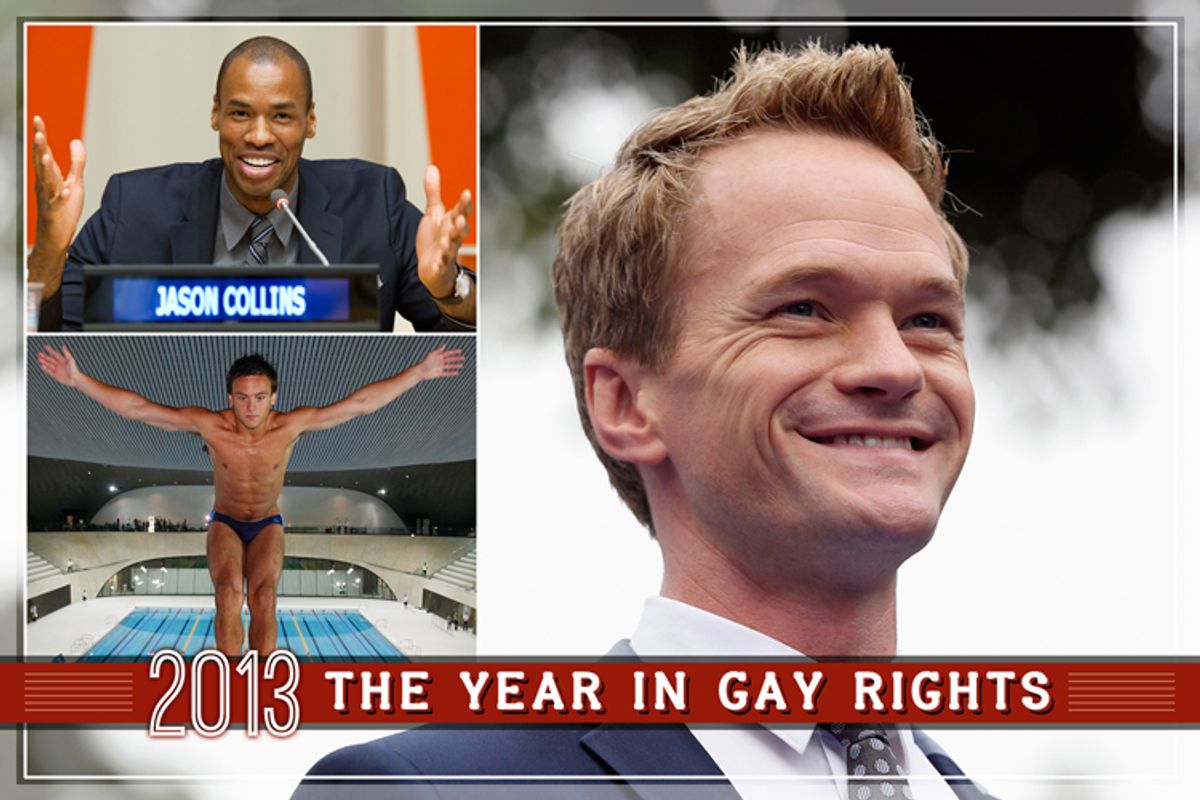 2013 was a big year for the gay-rights movement in America, with the Supreme Court overturning the Defense of Marriage Act and several states legalizing same-sex marriage (New Jersey didn’t surprise us, but Utah did — let’s see if it sticks!), celebrity comings-out that furthered the notion that being gay is unremarkable, as well as growing rejection of homophobia nationwide.

While it cannot be avoided that this was in many nations an exceedingly difficult year to be gay (with horrifying new legislation in India, Russia, and Uganda) and that there's much more to be done beyond simply the marriage movement stateside, the U.S. saw advances that give us reason to be hopeful for the years ahead. Here are the people on the vanguard in 2013 — and those whom history has somewhat left behind.

Collins, a career NBA player, came out of the closet this year and would have been the first gay athlete in a major U.S. sport had he been picked up by a team for another season. Even still, his confession in the pages of Sports Illustrated set a classy example for those athletes who might follow in his footsteps — like Olympic diver Tom Daley, who came out later in the year. Other stars who were already out continued to triumph (between Tony and Emmy hosting gigs and a lucrative final season of "How I Met Your Mother," Neil Patrick Harris looks more and more each day like the most universally beloved all-around entertainer) and stars who came out were generally greeted with admiration for both their bravery and the lack of interest they had in publicity mileage — actor and writer Wentworth Miller came out in protest of Russian laws, while actress Maria Bello wrote about her relationship with a woman in order to make a statement about what a family looks like.

Though there’s been much speculation that there are closeted gay NFL stars, there has never been an out player in America’s most macho pastime. Perhaps that’s because opinions like those of San Francisco 49er Chris Culliver, who said before last year’s Super Bowl that a gay player would not be welcome on his team. While Culliver’s in the minority as someone who goes there publicly, attitudes like his are still far from rare. An NFL player coming out in the future (it has to happen someday!) will surely be a huge news story — and would silence the Cullivers of the world.

The Daily Beast media critic took the occasion of Collins’s coming-out to make bizarre and false claims about Collins having misled the public over his past engagement to a woman. Kurtz is a dolt who gets plenty wrong, but Collins was an easy target for this strange smear, as Kurtz tried to convince the public and himself that a newly out man was somehow disingenuous. He ended up losing his job, and now is among like-minded folks at Fox News.

No, not just because of the DOMA decision. Ruth Bader Ginsburg and retired Justice Sandra Day O’Connor both performed gay weddings this year — a welcome sign, especially given O’Connor’s pragmatic conservatism, of their engagement with the times.

Chris Christie’s state, New Jersey, ended up getting same-sex marriage equality without Christie ever having to change his policy, having vetoed marriage in the past and been overruled by the state’s Supreme Court. Sure, it’ll play in the Republican caucuses — but his position won’t age well. And, given how taciturn Christie’s been on the issue, quietly ending his legal appeal, it seems he knows it.

These two personages were suspended from their respective jobs for homophobic language: Baldwin, an MSNBC host, was later fired, while Robertson was suspended from his role on A&E’s “Duck Dynasty.” The particulars here are different — Baldwin shouted a homophobic slur at a paparazzo, while Robertson gave a crude characterization of homosexual intercourse, which he described as a sin, in a GQ interview also full of racist invective about Jim Crow laws. While Baldwin depicted his firing as political correctness run amok and Robertson’s fans claimed “First Amendment” protections, both incidents were the market correcting —there was little room, in 2013, for public figures who were willing to openly denigrate gay people.

Though change within the Catholic Church will be incremental — if at all! — mere hope, in the form of a pope who was willing to abstain from judging gay people, was something no one might have expected at the start of 2013. Pope Francis became, unexpectedly, a man of his time, making gay-rights detractors seem all the more behind-the-times. If the spiritual leader of Catholicism can go against centuries of church teachings to express support for gay people, what’s an NFL player or a reality-TV cast member’s excuse?