Fox thinks Christianity is under attack, thanks to non-white Santas, freedom of speech and the word "holiday" 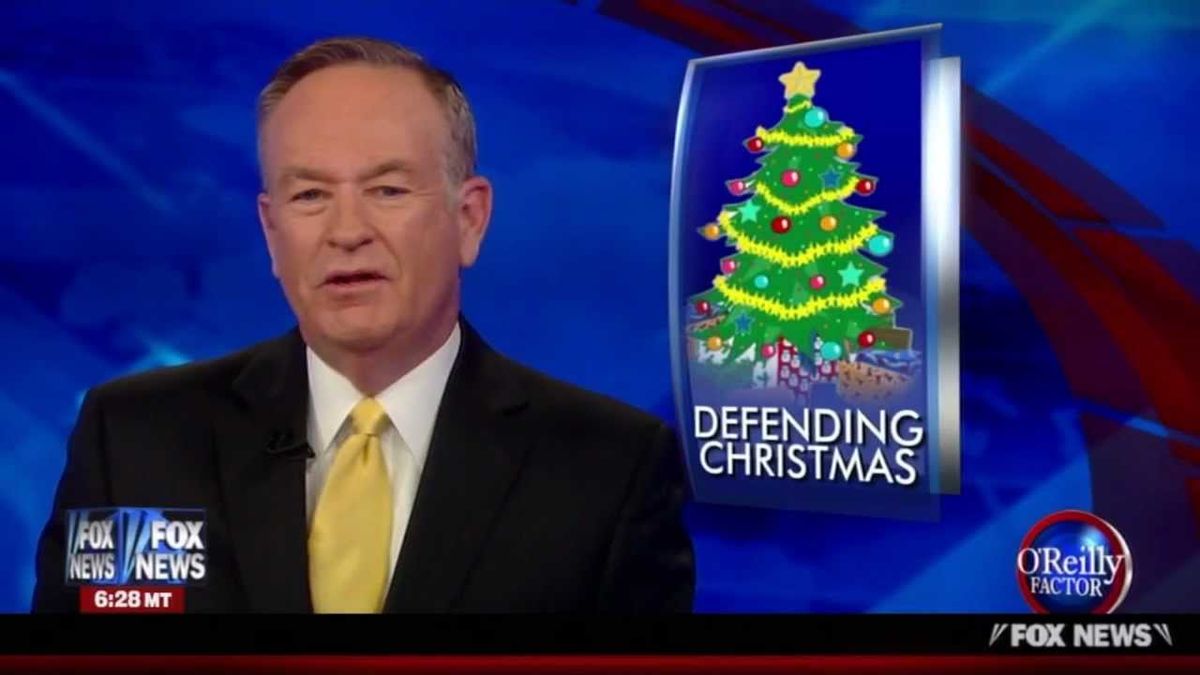 As Daniel Denvir explains in Politico, the War on Christmas has a rich history rooted in right-wing America. But it was Fox News that, residing atop what Jon Stewart often refers to as Bullshit Mountain, began the media circus over the so-called attack on the Christian holiday in 2004 (Media Matters has nearly 100 posts tagged with “War on Christmas” since then). Over the years, Fox has come up with a host of bizarre evidence of this so-called attack on Christians -- here are a few of the most ridiculous ones:

Fox’s first declaration of the War on Christmas as we know it today began with none other than that shouting voice with a face, Bill O’Reilly, who was furious with stores that didn’t mention the word “Christmas” with holiday displays. To this day, the mention of the word “holiday” has been seen by O’Reilly and his fellow anchors as a dirty word.

2. The banning of stuff that no one is actually banning

Because the War on Christmas is not a real thing, Fox News anchors occasionally say some not-real things to support their not-real claims. For example, in 2004, Sean Hannity said that a New Jersey school had banned “Silent Night” from a musical performance in 2004. Though the school had planned to leave the song off after one one parent objected to the inclusion of the Christmas carol, the parent later withdrew the objection, and the song remained on the bill.

In 2005, O’Reilly falsely claimed that a Texas school district "told students they couldn't wear red and green because they were Christmas colors,” calling it “fascist.” The school district responded by releasing an official statement, and asking O’Reilly to retract his.

The following is a direct quote from O’Reilly in 2004 (emphasis mine):

“All right. Well, what I'm tellin' you, [caller], is I think you're takin' it too seriously,” began O’Reilly to a Jewish caller who complained about the emphasis schools place on Christian traditions in 2005. “You have a predominantly Christian nation. You have a federal holiday based on the philosopher Jesus. And you don't wanna hear about it? Come on, [caller] -- if you are really offended, you gotta go to Israel then. I mean because we live in a country founded on Judeo -- and that's your guys' -- Christian -- that's my guys' -- philosophy. But overwhelmingly, America is Christian. And the holiday is a federal holiday honoring the philosopher Jesus. So, you don't wanna hear about it? Impossible.”

4. The "secular progressive agenda" that includes "legalization of narcotics, euthanasia, abortion at will, gay marriage"

Because “Western Europe and Canada.”

Although Fox would never admit it, clearly Fox is part of its own problem! The evil network wishes its viewers “Happy Holidays” in the middle of “The O’Reilly Factor," so the network's self-implosion is clearly imminent.

Free speech: You know, that principle that America was founded upon? That’s an assault to Christmas, says Gretchen Carlson, who, as far as we can tell, is a real person. In 2008, she said on “Fox & Friends,” "I am tolerant. I'm all for free speech and free rights, just not on December 25th." Ms. Carlson, I don’t believe that’s how tolerance works.

8. A Festivus pole made of beer cans

AKA a “satanic monument”

9. Any depiction of Santa that is not white

Aisha Harris's proposition that Santa Claus, a fictitious, magical being who can fly around the entire world in a single night in a sleigh pulled by reindeer, could therefore be of any race (even -- gasp !-- black) did not go over well with anchor Megyn Kelly. Kelly insisted that Santa Claus "just is" white, a point not open to debate, adding that “Just because it makes you feel uncomfortable, doesn’t mean it has to change.”

In a brilliant response to Kelly, "Daily Show" host Jon Stewart describes this as oppression: “I think that’s the official slogan of oppression. Oppression: Just because it makes you feel uncomfortable, doesn’t mean it has to change.”