Mom's girly presents to me

As a closeted lesbian, I cringed with every gift. For years, it felt like she was taking a scalpel to my identity 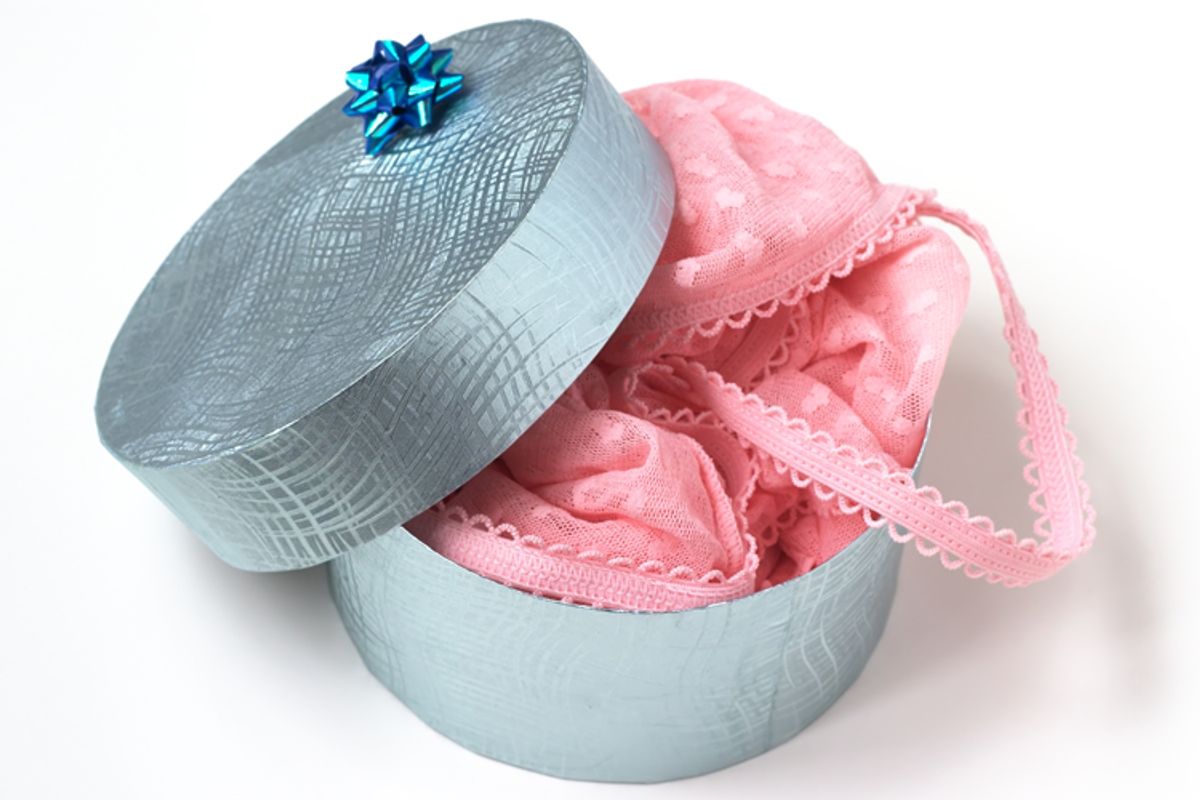 I tore open the Santa paper to find a short red cocktail dress. “Try it on,” mother said, holding it up in front of me. “Just try it on once for mummy.” She stared at my offending Giants baseball cap and T-shirt. I grimaced. An inveterate tomboy and a closeted lesbian, I felt like an impostor in a dress. And in a red dress with the words “Santa’s Helper” bedazzled on the rear, I felt like an idiot.

I grew up in the ’90s, with a mother who wasn’t exactly the Angelina Jolie to my Shiloh, defending my boyish sartorial choices. Quite the opposite, my mom waged a war to get me into more feminine attire. Every week in high school, mother assaulted me with a new article of clothing. She was a middle-aged female Liberace, whose tastes veered toward the laughably eccentric and: a pink shorty robe spackled with butterflies, Lilly Pulitzer skirts, and various camisoles of varied levels of transparency.

Maybe the use of “assault” sounds melodramatic, and I admit that being plied with finery was an extremely first-world problem. But whenever my mother put me in a dress, I felt as if she were taking a scalpel to my identity, trying to slice out the parts she didn’t like. And the holidays were the best opportunity for her to operate on me. Weekends in December became forced marathon shopping excursions in which I tried on skirts and gowns that would later become my presents.

Perhaps my mother did.  It occurred to me that she sensed I was gay. (At a young age, I already had “Xena Warrior Princess” collectable figurines.) I’m sure my mother thought if boys were more attracted to me I’d get straightened out, so to speak.

When I was young, my mom’s anger toward my style of style was so marked that I knew I wasn’t the child she wanted. I wasn’t a real girl. I was something twisted. I wanted to like dollhouses and frilly outfits but, no matter how hard I tried, I didn’t. By middle school, I thought I was a boy born in the wrong body. I tried on my father’s after-shave and cologne. I envied my older brother’s pants and crisp white-collared shirts. I’d often sneak into his room to try them on, tying my father’s pocket watch to the belt loop and twirling it around, pretending I was an old-timey gumshoe. “See here missy, we can’t take the case and that’s that!” If my mother caught me, she’d turn beet red and yell at me to go to my room and change. I knew something about me was wrong.

By high school, I realized I didn’t truly want to be male. But I didn’t want to be the type of girly girl my mother’s narrow sense of femininity mandated, either. It didn’t stop her from trying. Every family occasion became knock-down verbal warfare, with me fighting for my right to dress as I chose.

“You’re so ungrateful,” she said, as I opened a full-length purple ball gown on Christmas my senior year of high school and promptly frowned, tossing it to the side.

I can see where she was coming from.  My mother grew up financially strapped in Kansas with a strict puritanical mother and a dying father. She could never afford the skirts and dresses that she lavished upon me. Her childhood princess dreams went unfulfilled. The adult ones had come true. With a home in the Bay Area, a career in editing and a successful husband in finance to boot, mom had it all. Buying me dresses was a way for her to fix a past tarnished by the scarcity she lacked now; but it was also her way of fixing me.

Two holidays ago, my mother started giving me gifts I would actually wear: a pin-striped blazer, a men’s wallet, and even a skinny tie. Gone were the multicolored miniskirts of yore. After the festivities wound down, I asked her what prompted the change.

My mother surprised me by admitting she’d been self-absorbed, only seeing me as an extension of herself. She said that, as a child, she would have given her front teeth for the clothes she lavished upon me. “It felt like you were rejecting all the privileges we’d worked so hard to give you.”

I nodded, knowing that she was leaving out part of the story. That same Christmas my mother invited my girlfriend to spend New Year’s Eve with us. It was the first time a female partner of mine had been invited to anything.

But even though my mother let up, I found myself struggling in adulthood with the strict sense of gender conformity she raised me with. I was drawn to butch women, but I didn’t necessarily want to date them. While walking down the street with a boyish girl, I felt ridiculous. We just looked too gay to my eye. Years of shopping excursions had instilled a hypocritical bias against manly styles of dress and, no matter how much I tried to intellectually reason myself out of it, I wanted my partners to pass as “straight” to the heterosexual world. There was still a little girl inside of me searching for my mother’s approval. Mother might never see me wearing a dress, but I could date a girl who would.

A year ago, I was dating a cargo-pants-wearing computer programmer who constantly sported an oversized hoodie. I thought she was gorgeous, but when we were together in public I was ashamed. I kept on mildly nudging her toward more girly attire. “I just don’t feel like me in a skirt,” she said. “Don’t you understand?”

I understood completely. I knew how damaging my mother’s disapproval of my boyishness had been. Despite that -- or maybe because of it -- I found myself in a fitting room holding up a black cocktail dress in front of my girlfriend’s shrinking form.

I guess the old saying was true. In one way or another, we all turn into our mothers.

Lisa Gunn is a writer living in Brooklyn.