"Love Actually" isn't really about romance, it's about movies. For a better love story, try the bookstore 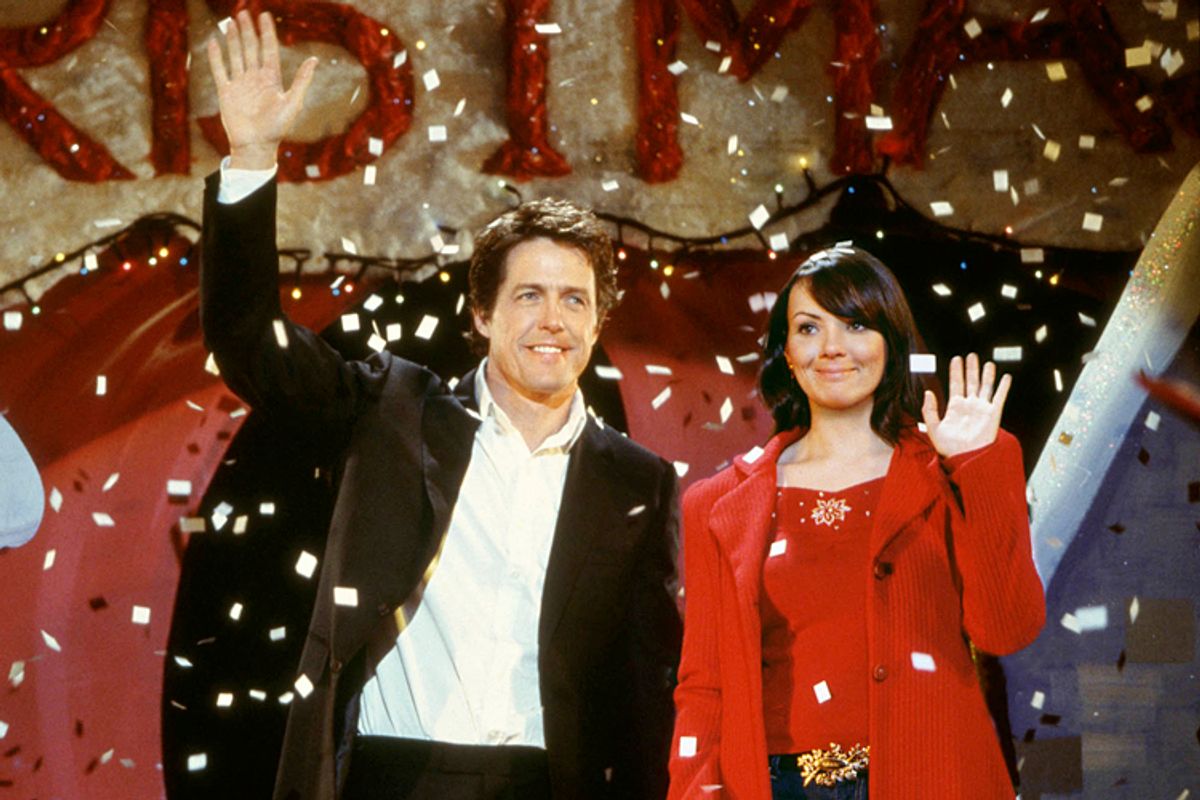 "Love Actually" is not about romance. When Chris Orr made this point in The Atlantic, the Internet exploded with briefs for and against. Having watched "Love Actually" for the first time to see what all the fuss was about, I have to say that I think Orr is correct. Also, the film is terrible.

If it's not about romance, though, then what is this movie, billed as "the ultimate romantic comedy," actually about? That's easy. It's about romantic comedies — or, more generally, about movies. In fact, "Love Actually" is positively obsessed with its own movieness; with spectacle, performance and audience. Set in the holiday season, the narrative opens by encouraging the audience to visit an airport and see all the people greeting each other — "love actually is all around," the voice-over insists, meaning that love is visible, and encouraging you (and you, and you) to turn your holiday travels into a rom-com in miniature. Watch people as if they are in a movie, the voice-over insists; they are all performing love and affection for your emotional and aesthetic pleasure. And then, of course, watch the movie to teach you how to watch life. "Love Actually" does not eschew authenticity, as Noah Gittell suggests. Rather, it presents the movie itself as authenticity, the lens through which to view the world.

Movie references are everywhere in "Love Actually." John (Martin Freeman) and Judy (Joanna Page) fall in love while working as body doubles for a filmed sex scene; the performance of love (in the film within the film) becomes the reality of love, just as their performance of love (in the film) is meant to show us the reality of love. Daniel (Liam Neeson) and his stepson Sam (Thomas Sangster) watch scenes from "Titanic"(footage of which is actually shown in the film) in order to teach Sam about how to deal with his crush on Joanna (Olivia Olson) — in the final scene, Sam mimes an exuberant moment from "Titanic," throwing his arms out and cutely merging his romance with Leo and Kate's. For his part, Daniel's wife has died, and he has sworn only to date Claudia Schiffer — so, inevitably, he bumps into/falls in love at first sight with Carol, the mother of one of Sam's classmates, who is played by Claudia Schiffer.

In what Orr and I both see as the creepiest plot of the film, Mark (Andrew Lincoln) expresses his unrequited love for his best friend Peter's wife Juliet (Keira Knightley) by filming her in fetishistic close-up throughout her wedding. He is the viewer, and his impossible love for Juliet is mapped precisely onto the (marked as male) viewer's impossible desire for Knightley. After Juliet discovers the tape and Mark's feelings for her, Mark decides to go to her door and make a declaration of love using cue cards (another movie prop) so that Peter (Chiwetel Ejiofor) won't be alerted. Mark then walks away; Juliet runs after him and kisses him, and he mutters "Enough, enough." Alyssa Rosenberg sees this moment as "deflating and honest." But given Mark's status as audience stand-in, it seems less like a demonstration of romantic realism, and more like special pleading for the movies themselves. Mark cannot have what he captures on film, but he still has Knightley running after him and kissing him; her body, her image, her solicitation. What more could a moviegoer ask for? (And the fact that the point of identification here is the white guy, while the black Peter is marginalized in his own marriage, only makes the trope of audience-as-romantic-hero more gross.)

"Love Actually" is enraptured not just with the power of film, but with the glamour of performance. The emotional high points of the film occur in public, before an on-screen audience that stands in for the studio audience. Jamie (Colin Firth) proposes to Aurélia (Lúcia Moriz) in front of a massive crowd; when she accepts, they all burst into applause, cueing us to do the same, in case we couldn't tell. Similarly, David (Hugh Grant), the prime minister, kisses his love interest Natalie (Martine McCutcheon) for the first time thinking they're hidden in the wings at a Christmas pageant, only to find that they're right in the middle of the stage, in full view of the entire audience, including friends and family. Finally, Sam declares his love in an airport — a venue that the opening sequence has already cued us to see as a performance space.

In his defense of "Love Actually," Ben Dreyfuss argues enthusiastically that "Romance is the big gesture. Romance is the love that erupts without a spoken word. Romance is skirting airport security." But those gestures in "Love Actually" aren't romance. They're film. We are, like Dreyfuss, supposed to conflate the two, and believe that romance is a movie, and that viewing the movie is romance. We're supposed to view love in "Love Actually" as spectacle, seeing others' lives, and our lives, as consumable, visible tropes. But is that the only way, or the best way, to see romance?

Orr and others have compared "Love Actually" to other rom-coms, but, considering the movie's investment in its own filmness, it might be worth contrasting it with something a little further afield. Specifically, in thinking about what romance is, why not look at romance novels? In particular, Cecilia Grant's Blackshear series of Regency romances offer a striking contrast to "Love Actually."

That contrast can be summed up as the difference between film and reading. In "Love Actually," as Orr and others point out, you don't get to know any of the (many) protagonists very well. Most of them are little more than their plot; we don't learn anything about Mark, really, except that he loves Juliet; we don't learn much about David except that his wife died; we know nothing at all about Mia (Helki Makatsch) except that she's hot and improbably throwing herself at her older, dowdier boss, Harry (Alan Rickman), who we don't know all that much about either. We know nothing at all about Carol except that she's played by Claudia Schiffer — a nice metonymy for the way that the stars here (Knightley, Emma Thompson, Colin Firth, Hugh Grant) are more important than their characters.

In Cecilia Grant's books, on the other hand, learning about the characters is the whole point. The books don't just want you to see the spectacle of people falling in love, the grand filmed gesture — they want you to fall in love yourself. And that falling in love occurs through narrative. In "A Gentleman Undone," for example, the climactic scene, the declaration of love, occurs in private, in bed, when Will, a former army officer in the Napoleonic Wars, tells Lydia his deepest secret: he strangled one of his own mortally wounded soldiers to death as an act of mercy when, after carrying him painfully from field hospital to field hospital, he could not find the man medical care or even opium. Lydia responds to his confession:

"You're not a good man, Blackshear," she whispered.

"I know." It felt like a pound of flesh given up. He closed his eyes.

"You break your promises and you fuck other men's women and you haven't even a soul to your name."

A shaft of hot, grief-tainted pleasure stabbed through him. "I know." He jerked his chin in a nod.

"You went to bed with me in the guise of an honorable man, but you never were."

…He opened his eyes.

And he knew there'd have been no point in asking for mercy. It was a word with no meaning to the creature whose gaze met his.

She stared down at him, his judge and his ravisher, appalling as the eagle who'd feasted every day on Prometheus's liver, and he as powerless as that Titan, chained to the rock, rent open, his darkest, most unspeakable secrets laid bare to her view.

Her eyes hardened. Her lips pressed tight. She leaned an inch nearer. "I love you," she breathed, just loud enough for him to hear.

That seems fairly romantic to me; even a grand romantic gesture. But it isn't a filmic gesture. There isn't an audience, and while there's a performance of sorts, there isn't anything to see, in the way that you can see cue cards or a dash through airport security. Instead, there's a reading; Lydia (and the reader) sees Will exposed, undone, his "most unspeakable secrets laid bare." And because she can read him, she can love him — and, more than love him, make herself part of his story. It's not a coincidence, either, that the story she hears Will tell is also the story that opens the novel; as readers, we first see Will carrying the wounded man from hospital to hospital. Just as Mark is the viewer in "Love Actually," Lydia is here the reader, learning not the image, but the narrative of love.

That narrative is romance — and it's a narrative that "Love Actually" repeatedly rejects. The few characters who get to know each other end up breaking off their relationships. Sarah (Laura Linney) has long been in love with the yummy creative director at the company where she works, Karl (Rodrigo Santoro). He discovers that she spends a lot of time caring for her mentally ill brother Michael — but instead of (like Lydia) seeing this revelation of her self as a confidence, he runs away. In another plot, Karen (Emma Thompson) discovers that her husband, Henry, has bought an expensive necklace for another woman. She makes this discovery by paying attention to the relationship — by the kind of metaphorical reading that occurs in romance novels, in other words. But this one example of reading serves only to reveal incipient infidelity. Paying attention and learning about your love seems only (as Chris Orr notes) to lead to heartbreak.

The point here is not that all books about romance are better than all movies about romance. "Love Actually" is quite, quite bad, but it still isn't as bad as "Fifty Shades of Grey." But I do think it's curious that discussions of romance seem so focused on the rom-com as the embodiment of what romance can be. When Chris Orr argued a while back that rom-coms were dying because of social changes, for example, he didn't for even a second mention that romance novels are thundering along cheerfully, a $1.4 billion a year industry. Though Orr dislikes "Love Actually," in other words, he seems to agree with its central premise, which is that romance and film are the same thing.

"Love Actually" wants us to see love as a gesture you project for the cameras, and romance as a collectible image, a kind of popcorn to munch, so that an 11-year-old becomes an iconic romantic hero. Cecilia Grant offers an alternative: a vision of romance not as a gloriously all-ages-accessible image, but as an adult skill that requires study and work and insight. If we want to know about love actually, it seems like we might consider the perspective of Grant and her romance novelist peers, rather than looking solely and always to the silver screen.