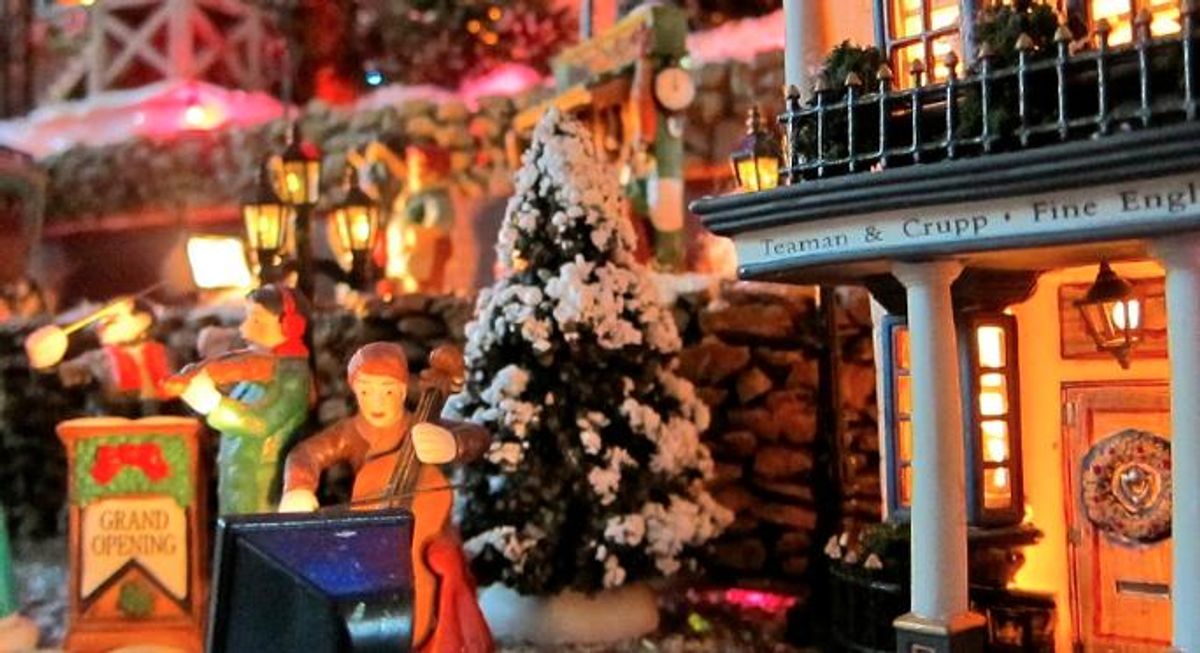 Part of OnEarth's Answers from the Past month, in which our contributors explore how contemporary thinking on sustainability has been influenced by wisdom handed down to us from previous generations. Read more here.

So you know those scale-model Dickensian villages that pop up this time of year in store windows or on holiday-themed merchandise display tables? The ones that most kitsch-averse people would describe as cloyingly precious, depicting an idealized vision of community where all the elegant rowhouses boast Christmas trees in their bay windows and red-ribboned wreaths on their front doors; where the rustic pub (and its cozy inn upstairs) seem illuminated from within by gently flickering firelight; where miniature carolers in scarves and hats hold up thumbnail-sized songbooks as they gather in the town square’s decorated gazebo; and where a toy steam engine—whistling and looping perpetually around an oval-shaped track—completes the whole, treacly, over-the-top Yuletide scene?

Um, well … the thing is … I love those. I always have. As a kid, I would make my whole family stop our Christmas shopping whenever we came across one of these tiny, twee tableaux. Everybody had to wait with their bulging bags as I stood there, spellbound, fantasizing about living inside the storybook setting before me. I pictured myself walking out the front door of our handsome Victorian and past those belonging to all my friends and neighbors; gliding down the lit-up Main Street’s procession of candy stores, toy stores, inns, and restaurants; and finally arriving at the picturesquely snow-dusted village green to belt out “Deck The Halls” with my fellow townspeople, in good Dickensian fashion.

Then I’d be jolted back to 1970s Dallas, Texas, as my family and I zig-zagged through the massive shopping-mall parking lot in search of our car. Upon relievedly finding it we’d pile in and make the comparatively unfestive 20-minute drive back to our suburban ranch house, past the drugstores, tire stores, supermarkets, and 7-11s that made up the melancholy streetscape scenery of what was, to me, the real world.

There’s a reason, I think, that human beings—wherever they happen to live—dream about disappearing into the inviting setting of an urban village, be it real and historic or fake and kitschy. In the visual shorthand of our collective unconscious, the scene functions as a reliable stand-in for our much more abstract and hard-to-define concept of community. On some intuitive level, we know that we owe much of our civilizational progress to the 12,000 years we spent interacting with one another in our shared spaces, public and private. The overlapping systems that eventually fused into what we call “culture” could never have done so without the regular opportunities for healthy intellectual, economic, and social collision afforded by the urban-village model.

READ MORE FROM THE SERIES: Answers from the Past

Today, as suburban sprawl and carbon emissions increase commensurately, we rightly tout the inherent sustainability of that older model, arguing for greater density, centrality, and walkability when planning our new cities and rebuilding our old ones. Throughout most of human history, however, these elements of the urban village weren’t laudable goals so much as logistical givens. This remained true even after horse-drawn omnibuses and streetcars arrived in the 19th century, and later, electric streetcars, trains, and subways. As much as these and other forms of public transportation changed the social and economic dynamics at work within our communities, they didn’t fundamentally alter how we felt our neighborhoods should look and feel.

No, it took the automobile to get us to second-guess 12,000 years of common-sense, community-reinforcing urban planning. It’s no secret that when large numbers of us stopped walking or taking public transportation and started driving cars instead, those cars took us down the road toward air pollution, global warming, and climate change. But something else happened, too: the civic aspect of walking through one’s community was irrevocably diminished. Before people began moving in droves to the sprawling suburban-style housing developments that our midcentury car culture spawned, the typical 20-minute commute between home and work (or school, or your house of worship, or even your local subway station) took you through your neighborhood at the comfortable speed of the pedestrian. As you walked, you saw friends, passed your favorite local restaurants and shops, kept an eye out for any suspicious activity, and noticed whose house could use a new coat of paint or which neighbor might need some help shoveling snow.

That same commute in a car zipped you out of your neighborhood at 25 miles an hour and onto a thoroughfare or highway; with your ears tuned to the radio and your eyes on the road, you left your neighborhood in your rearview mirror. These transportation choices, it turns out, have played an oversize role in our climate crisis (transportation accounts for nearly 28 percent of annual U.S. greenhouse-gas emissions), but we don’t talk nearly so much about what else our modern dependence on cars—a dependence built in to most of our contemporary urban planning—has cost us: those many moments of routine connection with our communities that we used to experience on a daily basis.

The design and land-use movement known as New Urbanism developed during the 1970s and 1980s as a response to this sad state of affairs. The label, of course, is an ironic misnomer. What the architects, urban planners, social critics, and enlightened land developers who defined its tenets and spread its gospel were actually encouraging was the reclaiming of an old urbanism: the one that gave us the dynamically dense, unabashedly walkable village that helped transform us from a bunch of Neolithic goatherds to the wheel-inventing, globe-circumnavigating, smartphone-addicted sophisticates we are today.

The first community designed along New Urbanist principles was the 80-acre resort town of Seaside, Florida, which helped establish the movement’s templates. Among them: concentrating retail in a central, pedestrian-scaled commercial district; strategically siting civic amenities—schools, houses of worship, theatres, etc.—such that no resident would ever feel too removed from any of them (and, importantly, could walk to all of them); and architectural guidelines, as opposed to restrictions, that fostered aesthetic coherence without forcing people to choose from a limited range of cookie-cutter houses.

The cultural chord that Seaside struck resonated. Unfortunately it resonated less with city planners and zoning-board members than it did with commercial real-estate developers. Over the last quarter century, many of the latter borrowed just enough of New Urbanism’s functionally diverse, pedestrian-friendly identity to add a self-satisfied communitarian sheen to what are, basically, just upscale shopping complexes anchored by a multiplex and a handful of popular restaurants—and maybe some apartments thrown in for good measure. Most of these “lifestyle centers,” as they’re referred to in the unctuous parlance of commercial real estate, don’t even bother integrating mass transit, which needs to play a key role in any New Urbanist project that’s deserving of the label. (If they do bother, they make sure to offer thousands of parking spaces, too.)

But even though I don’t believe adding a trolley, a manicured “village green” and a few levels of apartment-style residences can turn a shopping center into an actual community, nor do I believe these faux-New Urbanist developments necessarily deserve all of the scorn that critics routinely heap upon them. Whenever I walk through one of these spotlessly clean, architecturally overdetermined simulacra (such as this one, in Glendale, California), even though my inner critic might well be railing at the crassly inorganic nature of it all, my inner ten-year-old is taking it all in—the families boarding the trolley, the couples sitting down to dinner at a sidewalk café, the shoppers browsing in the brightly lit stores, the residents watching from their upper-story balconies—and thinking: Cool!

Is it fake? Yes. Is it cheesy? Very. But like Dan Reed, a Washington, D.C.-based architect, planner, and urban design blogger, I believe that even the cheapest, most highly processed cheese still has some nutritive value. Reed has defended suburban “lifestyle centers,” arguing that even the most ersatz iterations of New Urbanism can serve as a psychic prompt that may help even the most dyed-in-the-wool suburbanite tap into his or her long-repressed collective memory of daily life in the archetypal village. Repeat the experience enough times, he suggests, and you might just end up awakening something dormant deep inside that person.

As a teenager living in the exurbs of Washington, D.C., Reed would regularly trek to theWashingtonian Center, a retail and entertainment complex in Gaithersburg, Maryland. There, he writes, “walking suddenly became something fun. We could walk from the movies to an artificial lake, then look in store windows on our way to dinner. And we could do all of this while being around and looking at other people.” This early encounter with what he calls "gateway urbanism" proved to be formative, starting him on the path toward thinking holistically about architectural planning: not just buildings, but also (in his words) “the spaces between the buildings.”

Today Reed lives and works in downtown Silver Spring, Maryland: a shining example of how the smart application of New Urbanist principles can bring a dying city back to bright, vibrant life. If it takes dinner and a movie at the local lifestyle center to imprint the urban-village meme onto the minds of the next generation—to get them thinking about the civics of space—then I’m all for it.

These days I’m lucky enough to live in a beautifully preserved swath of New York City that’s about as close as you can get in America to the full-size version of one of those nostalgic scale-model villages I’ve always loved. Architects and urban planners designed and erected most of the buildings, avenues, and parks in Park Slope, Brooklyn, in the half-century between the end of the Civil War and the beginning of the first World War. Like other neighborhoods built then, mine simply and elegantly reiterates the common-sense planning precepts that have served human beings so well since we first moved out of our sequestered caves and into our earliest communities.

All this common sense feels uncommonly magical, though, on a cold evening in December, when my family and I can stroll down a street of lovely brownstones and buy a Christmas tree on the avenue, then pause on the way home to chat with some friends on their stoop, pick up some ornaments or wrapping paper, maybe even indulge in a hot chocolate at our favorite neighborhood cafe. It’s a beautiful sight. We’re happy that night. We’re walking—walking—in a winter wonderland.