5 reasons to feel hopeful about reproductive rights in 2013

This was a hard year for women's rights, but people are fighting back and giving us plenty of reasons for optimism 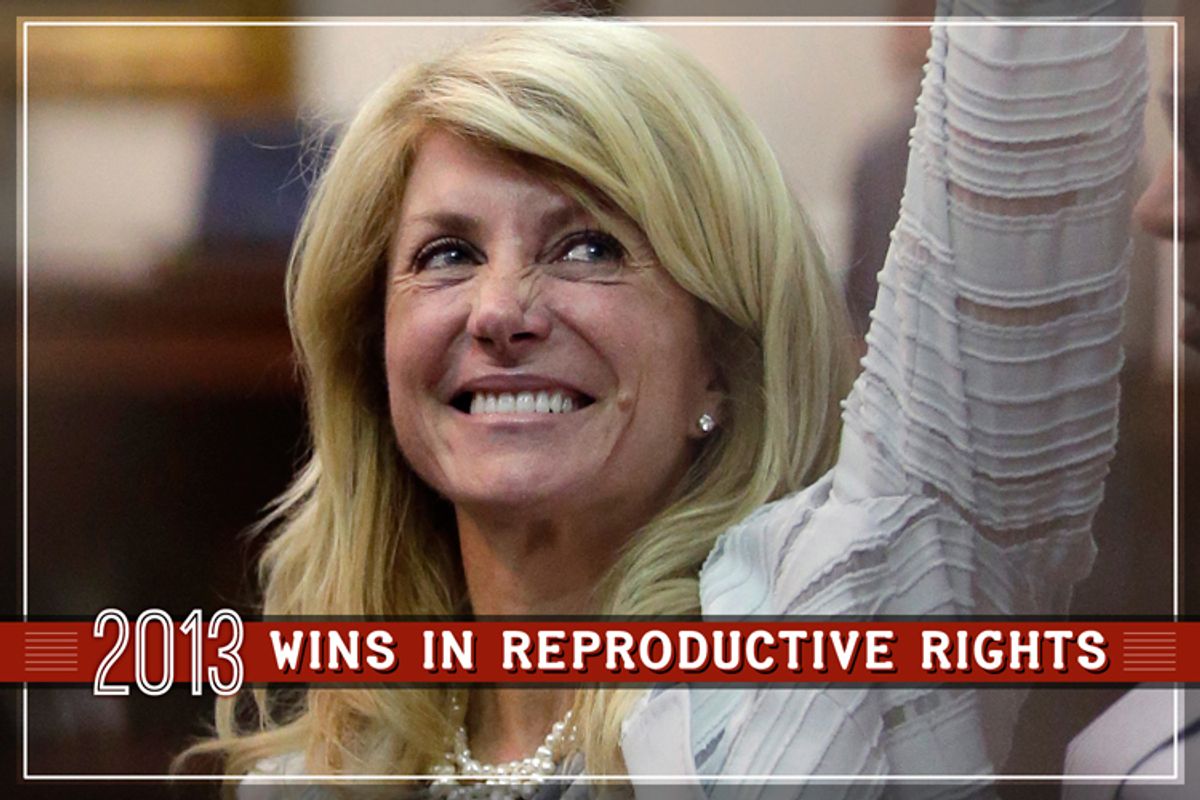 There are lots of reasons to feel very bad about reproductive justice in the United States right now (see here for more on that), but there are also plenty or reasons to feel optimistic that things are going to get better in the coming year.

While anti-choice lawmakers are showing no signs of slowing down in their quest to push increasingly draconian restrictions on women's reproductive freedom, the movement of people fighting back is stronger, smarter and more organized than ever.

There is a long road ahead, but here are five reasons to feel pretty good about 2014:

Women are fighting back more forcefully than ever

A few of the movement's strongest advocates, in their own words:

Texas activist Sarah Slamen testifies against Texas' abortion ban: "Thank you for being you, Texas Legislature. You have radicalized hundreds of thousands of us, and no matter what you do for the next 22 days, women and their allies are coming for you."

Texas state Sen. Leticia Van de Putte challenges the silencing of women's voices in the state legislature: "At what point must a female senator raise her hand or her voice to be recognized over the male colleagues in the room?"

Michigan state Sen. Gretchen Whitmer shares personal testimony in opposition to her state's ban on private and public insurance for abortion care: "I think you need to see the face of the women who you are impacting with this vote today.”

The conversation about reproductive justice is happening at an unprecedented scale

Abortion bans enacted throughout the country have had devastating consequences for women's health, but the fight against these measures -- whether in legislatures, courts or on the streets -- has made reproductive justice primetime news throughout much of 2013.

Wendy Davis' marathon filibuster is perhaps the most cinematic example of how a local law became national news, but it wasn't just the duration of her protest that made it significant. Over the course of nearly 12 hours, Davis shared the testimony of women who had bravely shared their experiences with abortion, showcasing the range of personal and medical reasons women need safe and affordable access to such care. She also uplifted the scientific and medical facts around abortion to dispel myths about unsafe clinic conditions or the claims of anti-choice activists that these laws "protect" women's health. In addition to inspiring the country with her endurance and commitment to women's health, Davis used her platform to debunk some of the most pervasive myths about abortion care in this country. Elsewhere in Texas, the work being done by activists in the Rio Grande region exposed how HB 2 and other laws like it disproportionately impact low-income women and women of color, contributing to a number of high-profile conversations about how -- even 40 years after Roe v. Wade -- access to abortion remains uneven and often inaccessible for far too many women.

These stories showed the nation that reproductive rights are human rights. They also showed that, in addition to providing abortion care, reproductive health facilities enable women and their communities to access low- and no-cost medical care beyond terminating a pregnancy, including pap smears, cancer screenings and prenatal and postnatal checkups.

Teenagers are staking their claim in the reproductive rights movement

Another major voice to emerge from Texas this year was that of 14-year-old Tuesday Cain. After watching Wendy Davis' filibuster, Tuesday and her father Billy were inspired to head to the Capitol to join with thousands of others in protesting the law. Tuesday's protest sign ("Jesus isn't a dick, so keep him out of my vagina") stirred conservative outrage and major backlash from the anti-choice movement, but rather than allow her critics to silence her, Tuesday became even more bold.

As she told Salon about her experience protesting in Texas:

She also used her own experience to encourage other teens to get involved in causes they care about -- and urged parents to support their children in doing so. "I think people should be supportive of [teenagers becoming politically active]," she said. "Wouldn’t they support their own kids getting involved in issues they cared about, doing what they felt was right?"

Democratic lawmakers may have finally gotten the memo that they need to do more than just vote against harmful restrictions if they really want to support abortion rights in this country. After three years of record-breaking anti-choice initiatives, the United States Congress finally introduced a measure to fight back.

A coalition of Democrats, led by Sen. Richard Blumenthal, D-Conn. and Rep. Judy Chu, D-Calif., in November introduced a measure that would curtail the proliferation of so-called Targeted Regulation of Abortion Providers (TRAP) laws and other medically unnecessary barriers to abortion care. As Salon has previously reported, the Women’s Health Protection Act would "create federal protections against state laws that have nothing to do with protecting women’s health and everything to do with undermining women’s bodily autonomy and constitutional rights in order to score political points."

Here's Blumenthal on the measure:

This assault on essential, constitutionally protected rights has gone on too long. We are introducing the Women’s Health Protection Act of 2013 this week to end it, once and for all. Our bill would stop states from subjecting reproductive health care providers to burdensome requirements that are not applied to medical professionals providing similar services.

California gets special recognition for being the only state in the country to pass a law that actually expanded access to abortion care in 2013.

California is now one among several states that allow nurses, midwives and physician assistants to perform early abortions. The measure broadens the pool of available medical professionals able to provide women with abortion care, and expands access into communities that have been traditionally underserved, such as rural areas where providers are often few and far between.

Lawmakers in the state know that they are bucking a national trend by acknowledging that access continues to be a problem for far too many women, and doing something to change it. “We are trending in a different direction, and we’re very proud of it,” Toni Atkins, the state assemblywoman who wrote the bill, remarked at the time. “This is an issue of accessibility,” she added. “California is a very large state, and more than half the counties don’t have an abortion provider.”