Have the Dutch created the perfect water bottle? 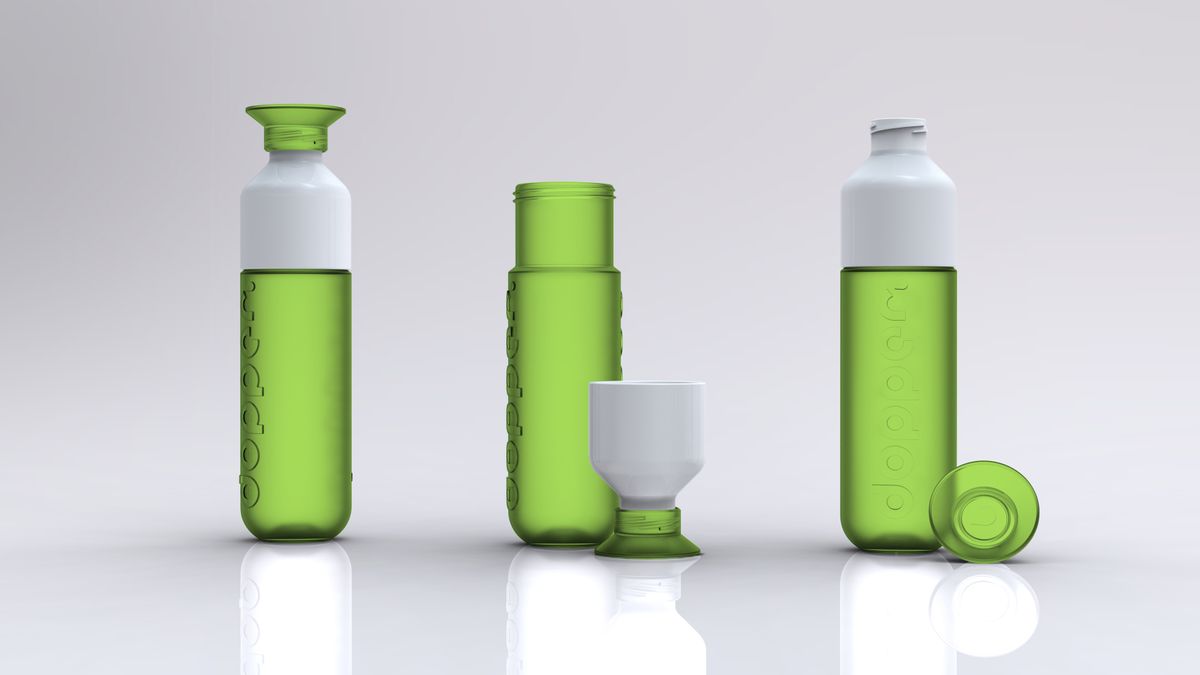 The whole point of a reusable water bottle is that you only need one. But for whatever reason, I've ended up with dozens. There’s the stainless steel bottle that sits on my desk at work and accompanies me on frequent trips to the water cooler; the one with just the right shape of mouth for bringing to the gym; the one that fits nicely in my purse; the one that snaps into my bike’s holder; and myriad others, many branded with company logos, that spill from my kitchen cabinet. The logic doesn’t follow that each new purchase makes me X amount greener, but I can’t help feeling that the size of my collection somehow attests to my environmental consciousness.

Despite my enthusiasm for water bottles, I had no idea what to make of the Dopper. A light and flimsy-looking plastic tube of Dutch design, the best way I can think to describe it is as an oversized pill capsule with a plunger on top. In most ways, it works like a regular water bottle, except that the top third can be unscrewed and used as a small, stemmed cup -- clever, if not immediately obvious why such a thing would be useful. Sitting side by side on my desk with my simple and elegant stainless steel bottle, the whole effect, like the word “Dopper” itself, came off as somewhat silly.

The Dopper’s strange design was no accident, believe it or not. It was chosen from among hundreds of submissions in a 2010 competition aimed at creating “the perfect reusable water bottle.” It won both for its practical features -- its high-quality materials, easiness to clean and the fact that, unlike some of the more out-there entries, it actually looks like a bottle -- as well as for its more metaphorical attributes. That plunger thing, for instance: I’d been looking at it as a lid. But when flipped upside down, its designer explains, it allows you to “put water on a pedestal.”

That’s far from the only ideologically-charged slogan employed by Dopper. Its official slogan reads: "The message is the bottle." And its mission, as founder Merjin Everrarts put it to me, is to “fight plastic with plastic.” Everrarts was inspired by the tremendous amount of plastic he saw littering the beach near his home, and by his desire to promote clean drinking water. As Everrarts saw it, he could go agitate at the barricades, or he could just come up with something that was "cooler than mineral water." I can't speak to what passes as cool in Holland, but I can say that the Dopper gets noticed, in a way that most reusable water bottles, which these days are ubiquitous, do not.

Just because the bottle is so unabashedly earnest, though, doesn’t mean it can’t be fun, too. I finally figured that out when a bottle of wine was brought out after a particularly long work week. When I told Everrarts that I had discovered the perfect use for the Dopper’s detachable cup, he immediately knew what I was talking about.

A ridiculously large number of water bottles are created and discarded each year, accounting, on the one end, for 47 million gallons of oil needed to produce them; and on the other, for 1.5 million tons of plastic waste, 80 percent of which will never be recycled. I'd already given up plastic bottles, so the Dopper didn't save any oil, emissions or water on my behalf. But as a bottle that's also a message, perhaps it can inspire other people to do so as well.

This isn't the first water bottle I've come across that attempts to make a statement. One of the earliest additions to my collection was printed with the slogan "Make love, not landfill" (I know, I know). I wouldn't call it greenwashing, necessarily, but it was definitely trying to capitalize on eco-friendliness as a trend. The Dopper, on the other hand, is trying to create its own style.

Everrarts swears he never intended to make money off of this. According to his version of events,  he originally intended to form a NGO -- that he ended up with a company instead was a happy accident of the Dopper's popularity in Holland. He continues to see Dopper less as a company and more as a "social enterprise." From the beginning, he used a portion of his profits to support clean-water projects in Nepal; this year, he started the Dopper Foundation, which continues that work. It also funds the Dopper Water and Waste Academy, which seeks to educate the public with his anti-plastic, pro-tap water message. He's not looking for consumers, he's looking for "ambassadors" to help spread the message. (Since the bottle is the message, can you blame them for promoting that, too?).

The original Dopper sells for $14.95; a new stainless steel version is slightly more expensive at $27.50. It comes with free tap water refills for life.

Technically, the Dopper's still a plastic water bottle. It just also happens to be durable and BPA-free. And you only have to buy it once.

At the most basic level, Dopper does what it sets out to do: it makes drinking water sustainable, which is as it should be.