The 17 most jaw-droppingly terrible lyrics of 2013 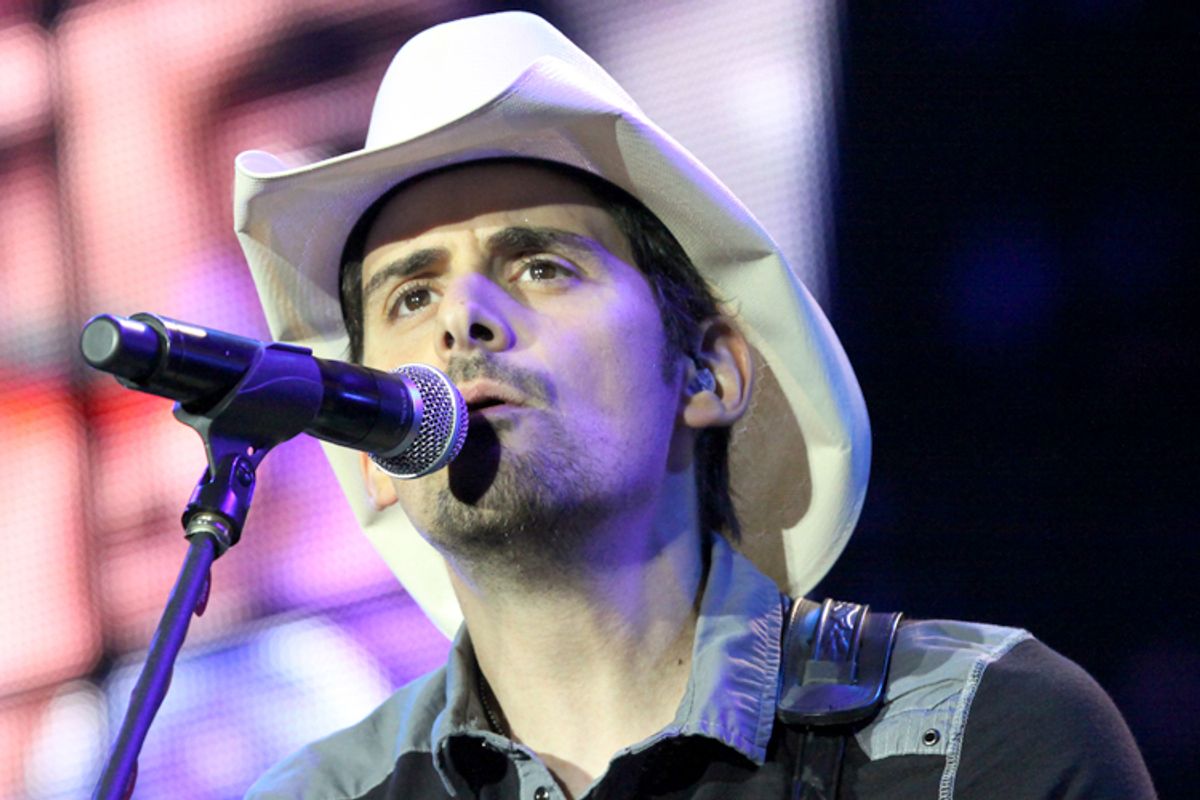 There’s something special about hearing a truly terrible lyric -- that rhyme or verse that makes you stop everything to bask in its glory. Listening to Madonna’s rap from “American Life” or parsing Train lyrics is like witnessing a moment in history, when the universe came together to create something that truly sucks. Luckily, 2013 was a banner year for terrible songwriting, one in which some seriously boneheaded lyrics from Robin Thicke (amazingly) weren’t even the worst thing that came out.

You'd better start getting your shit together now, 2014. Here are 17 lyrics you’ll have to work overtime to top, the best of this year’s worst.

1. “To the man that waited on me at the Starbucks down on Main/I hope you understand/When I put on that t-shirt, the only thing I meant to say is I’m a Skynyrd fan”  -- LL Cool J and Brad Paisley, “Accidental Racist”

Almost every lyric from “Accidental Racist” could form its own worst list, but this dizzying doozy takes the cake. Paisley apparently thinks that a shirt is the real problem here. (Hint: It’s the oppression, stupid.) These aren’t just the worst lyrics of 2013. They might be the worst ever.

Many things, Robin. Many things. Options include “mug me,” “drug me,” “plug me” and the highly appropriate “slug me.” “Pug me” also works, but I don’t know what that would entail.

Say what you will about Robin Thicke and his rather legendary douchebaggery, but at least he wasn’t openly advocating drugging your girlfriend to date rape her.

Is Katy Perry aware that rainbows don’t have eyes?

I feel like Kings of Leon was attempting to be funny with this nonsensical lyric from the newest record,“Mechanical Bull.” The problem is that Kings of Leon isn’t funny.

6. “I wanna have your baby/Gotta have you like crazy/And iron your shirts.” -- Geri Halliwell, “Half of Me”

In Australia, this song -- the former Spice Girl’s comeback single -- sold a staggeringly low 393 copies in its first week of sales. You can see why. Halliwell isn’t just stuck in 1997. She’s in 1957.

I can’t tell if these are some of the worst lyrics of the year or the best. Behold the gift to humanity that is 2 Chainz.

Rihanna reportedly turned down this song before Miley picked it up, as the young singer was interested in a more “urban” sound. With lyrics as painfully awkward and practically unsingable as these, I think Rihanna made the right choice.

“Chinese Food” is one of the worst songs of this or any year, and this rap from Ark Music Factory “hitmaker” Patrice Wilson is easily its lowest point. Patrice Wilson knows not what rhyming is.

On top of some seriously Avril Lavignesque metaphors going on here, Justin Timberlake sounds like his love life is a Dan Brown novel -- which is just about the least sexy thing I’ve ever heard.

Lady Gaga proudly claims songwriting credits on all of her music. Judging from “Venus,” which sounds like it was written on an elementary school bathroom stall, this isn’t something to brag about.

12. “I tried carrying the weight of the world/But I only have two hands” / “Life's a game made for everyone/And love is the prize.” -- Avicii, “Don’t Wake Me Up"

If this were composed in a Lisa Frank notebook, it would be the deepest sh*t that 5-year old girl ever dreamed up.

On top of being awkwardly racist, this just sounds a) like bad sex and b) unsanitary. Condiments take too much clean-up work.

14. “She killed me with that coochie-coochie-coo.” -- Justin Timberlake, “TKO”

Between “Holy Grail” and this, Justin Timberlake had a busy year making romance sound really unattractive. Does his beloved have vagina dentata? I feel like I should call a hotline to report something.

15. "So why you acting like you're tough/But now I thought you'd had enough/Don't you get tired of being rude/Aww, come and give me a hug, dude." -- Jessie J, “It’s My Party”

This year, Jessie J proved that if your crappy lyrics don’t rhyme, just throw the word “dude” at the end of the sentence. That’ll fix everything.

16. “It’s a beautiful night/We’re looking for something dumb to do/Hey baby/I think I wanna marry you.” -- Bruno Mars, “Marry You”

This song is from the Britney Spears school of engagement, where marriage is what you do when you’re bored. Who would dance to this song at their wedding? Because that’s definitely the message you want to send the person you’re spending your life with: “Hey baby, marrying you was dumb.”

This might be the most disappointing statement of the year. Can you imagine looking up into the sky, hoping to see Superman in flight, and seeing Pitbull instead? At that point, you should just move.