"My music is about to be world-wide": Big Freedia's moment 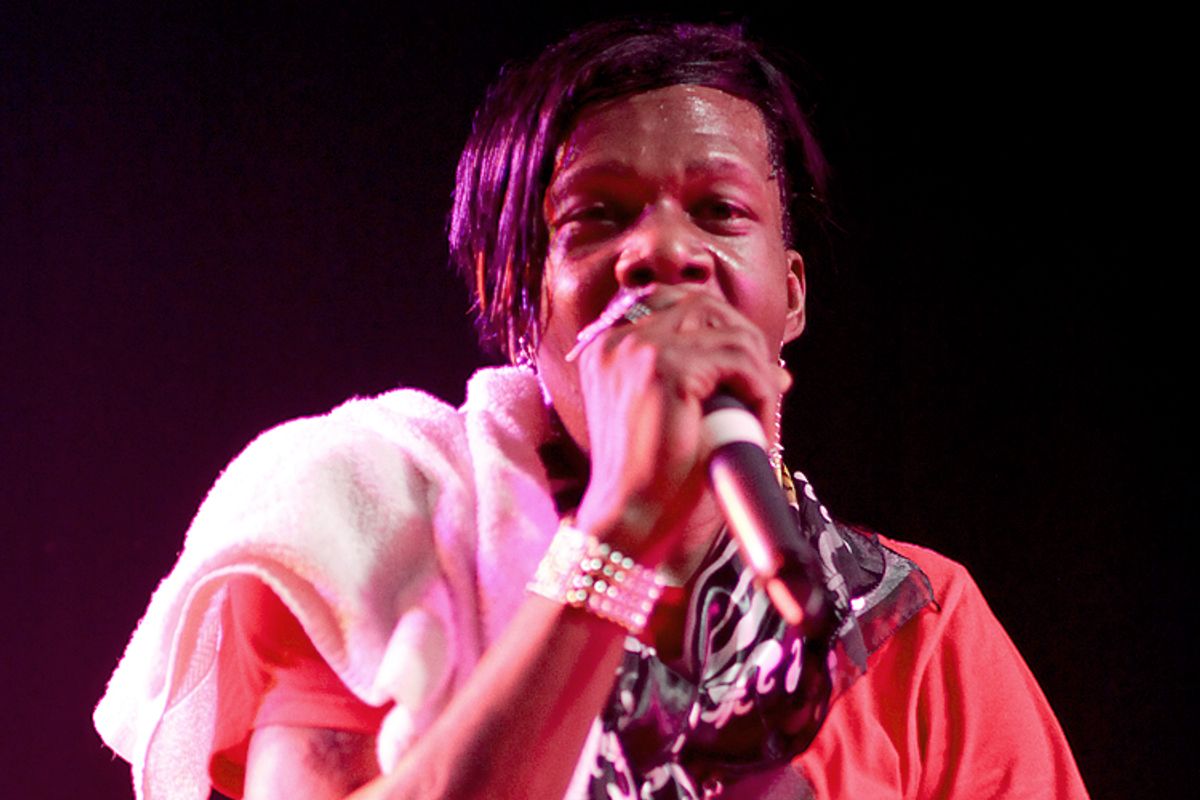 Down a quiet street marked with potholes, a common hazard in New Orleans, a black and gold Christmas wreath marks the Queen Diva’s territory. The house blends in with its fallen-fence neighbors, and stands out mostly for its size, the kid sister on the block.  The diva moved into the house two years ago to live closer to her mother, one of her biggest fans, and she has plans to move again soon to her mom’s new neighborhood.

A glacier-blue Chrysler 300 pulls into a skinny driveway that cuts through brown grass. The diva gets out of the driver’s side, asks her boyfriend Devon for a lighter and they bring in one, two, three baskets full of laundry. In the early December weather, Big Freedia wears a grey sweatshirt with red letters spelling “Queen Diva” across the back and sweatpants with “Freedia” running down the leg. She’s also wearing a type of grey shower cap. When filming her popular reality show “Big Freedia: Queen of Bounce” for Fuse TV, she does her best to keep her hair as “freshly done” as it was back in September when she set the Guinness World Record for Most People Twerking Simultaneously. The record set in New York City coincided with the launch of her show, and a total of 358 dancers participated, the oldest twerker nearing 80 years old. Freedia's face was plastered on a billboard in Times Square and when she looked up at her ass, seemingly two stories tall, she felt humbled. She thought her years of hard work were paying off. But she knows she has to keep pushing.

“This is the king of asses right here,” she said pointing to herself, then folding a washcloth. “I got all that support over asses.”

With Freedia in sweatpants, there are no reality TV cameras today.  As a bounce legend about to take an international stage, she still dresses down on laundry day.  She is regrouping after a six week tour — the longest to date of her career. She is also coming off a weekend trip to New York City, where she performed with Cyndi Lauper at her Home for the Holidays concert to benefit homeless gay, lesbian, bisexual and transgender youth.

For the show, Freedia’s vocals were looped throughout Lauper’s iconic “Girls Just Want to Have Fun.” They performed the song live, and Freedia says the whole audience got up off their feet. The show was a major moment for the queer rapper, and Freedia remembers feeling like she was getting a chance to take her music to the next level.

Freedia’s goal of bringing her music to the world — and the suburbs where people spend money on music — is like Manet painting "Olympia." It’s a whole new, frantic and layered thing. The beat is the main draw, often more important than the lyrics. You have to feel the music to actually hear it.

“Freedia is the movement of bounce right now,” said Shelby “Skip” Skipper, 25, an established bounce dancer who has performed with Freedia for two years, including on "Jimmy Kimmel Live!" in 2012. “He’s the one that’s touring from city to city, state to state and country to country. He’s like a tidal wave of bounce.”

But Freedia knows that bounce music might take people some time to feel. At a show last year in Connecticut, a crowd cursed and threw bottles at her while she was on stage. Freedia dodged the debris, hurled a few choice words at the bottle-throwers and kept rapping. For two weeks this year, she opened for indie-rock band Postal Service, and she says she saw some wives covering their husband’s eyes at first. But by the end of that tour, people were looking for Freedia’s name on the bill. She had won those crowds over, just like her fans believe she will do on a large scale in the upcoming year.

The city of New Orleans is putting a lot of hope on Freedia’s shoulders. If she can get the major radio hit or perform on a big stage like the BET awards or Grammys, it could open up outlets for other bounce artists and dancers, and help expose people to her culture. She has recently signed a distribution deal to make her music global, and she says she “steady keeps pushin’.”

“I feel pressure by what we’re trying to do to get to that next level,” she said. “My music is about to be world-wide, and I’ll be the first actual bounce artist to be in stores everywhere.”

“I’ve been gone from New Orleans for too long,” yelled Big Freedia, a week before laundry day during a short set for her dancer Tootie’s 22nd birthday. “I need to see a circle of asses around me.”

Freedia was raised in an Uptown New Orleans neighborhood, which she says was never quiet because people yelled all day and night. She sometimes worried about where she would get the night’s meal. She remembers seeing people get shot on the corner and a friend get stabbed, but feels like the city has helped her become balanced — kind and caring while staying tough. Throughout all this, she says, prayer kept her going.

Before her rap career, which she started pursing at age 22, Freedia was a gospel singer and eventually the choir director for a church. Once the church got wind of her rapping, things started to get shaky. The kids and most choir-members liked her raps, but, she says, the older folks and pastor had a problem with them. She had to choose between the two music styles.

“I was like if this is gonna be my career then I gotta go full force with it,” she said, “and that’s what I did.”

The only time she has lived anywhere other than New Orleans was 2005, when she was forced out by Hurricane Katrina and ended up in Houston. She moved back to New Orleans as soon as the first apartments became available, and she remembers starting the club night FEMA Fridays to lift the city’s spirits. She was the first performer back to the city after the hurricane.

“Freedia’s a very beautiful person on the inside but you can’t take that for a weakness,” said Tootie.  “She’s not selfish. There’s nothing that she wants for herself that she don’t want for her team.”

On stage for Tootie’s birthday, Freedia wore a leopard vest, black pants with sequins and gold hoop earrings with DIVA in the middle. Hair down to the middle of her back, she floated through the club smoking a skinny cigarette and giving hugs. This was the Queen Diva people expect. A yellow purse with snakeskin trim never left the crook of her arm, not even when she told the girls to bend over and get lower during her set.

“Everybody has their different uniqueness about them when they’re bent over or when they’re standing up,” she said. “They’re just expressing themselves.”

Future historians may look back on 2013 and remember it is as the year of twerk, a dance that originated with New Orleans bounce music and is now a word in the dictionary. After Miley Cyrus’s VMA performance, better known as the quasi-twerk heard round the world, many people in the city felt as though Freedia and bounce’s history had been jacked. Freedia, though, says she never knocks Miley or any other artists trying to dance. Still, some of her fans felt as though their culture was being taken from them without the proper recognition. In their defense of bounce, they may be advocating not just for Freedia, but for themselves.

At Tootie’s party, a woman braced herself on a table and twerked so furiously she knocked a beer bottle on the floor. On stage, Freedia commanded the dancers to “touch the ground.” The women seemed to dance for themselves, regardless of whether men were watching or not.

The New Orleans music’s raunchiness may come off as shocking at first. Some of Freedia’s song titles include "Booty-Whop," “Azz Everywhere” and “Gin in My System.” A YouTube search of most of these videos will prompt a content warning message citing “this video may be inappropriate for some users.” Bounce has been around in New Orleans since the 1990s, with artists such as DJ Jubilee, MC T. Tucker and Freedia’s friend Katey Red. But many have referred to Freedia as the leader of the movement.

Freedia often performs in straight clubs, as with Tootie’s party. She says she feels more than comfortable giving daps and hugs to anyone in the crowd.  She grew up performing in these clubs, and they are where she worked on her craft. Freedia's just as likely to be featured on a song like “Peanut Butter” with drag superstar RuPaul as she is on an upcoming remix with a Def Jam rapper.  She embodies New Orleans Southern Comfort mixed with the city’s gritty resilience.

“I earned my respect. It’s all about how you carry yourself,” she said. “I’ve always said I’m gonna be the one in the bounce game who change the game.”

Inside her house, Freedia folds her last burnt-orange towel, stubs out a cigarette and sits back on her leather couch. A red Japanese sash frames the front door. The living room is a hodgepodge of African-inspired art. Her cardboard face from a reality show promotion peeks out of the far corner. Her poodle Rita, a puff of cotton-ball hair, comes over and starts humping her leg. Freedia laughs, and says her other dog Sensation has just started her period. Freedia has bought doggie-pads for her. The diva is at home, but it seems she can only relax for a minute.

Skip says Freedia is a non-stop worker and sometimes the team has to tell her to slow down. Freedia has even been known to help when someone on her team moves into a new house. She plays a lot of roles: artist, manager and, as Skip says, “sometimes mom.” Freedia released her first single "An Ha, Oh Yeah" in 1999, and for the past 14 years has been steadily rapping, at times performing, as she says, every night Monday to Sunday. Her hustle has built a fan base and the “Queen of Bounce” is not a misnomer.

“I just kept puttin’ in the hard work and kept putting in the grind,” she said. “When I start this, it’s going to be something that I got to finish.”

Bounce is having a big moment, and while Freedia has worked for it, you get the sense she means it when she says she does it for the people. She's planning diverse collaborations in the future, but she will always give New Orleans what they want: as she says, “that gutter-Freedia.” She is approving the final song choices for a new EP called “Queen of Bounce” to tie it into the second season of her reality show. She expects her full-length album to come out sometime in 2014.

Skip describes bounce as the “heartbeat of New Orleans,” and Freedia is the current form of the music’s soul. The city believes it’s only a matter of time before Freedia gets the radio hit she’s been working so hard to hear. This is when the beat drops. Hers is a New Orleans story.

“Now that we are getting worldwide attention with the bounce music, people are even more proud to represent something of our culture,” she said. “Even though it’s asses, they love it.”