Rob Reiner on Scorsese: "When he calls and asks you to be in a movie, you just do what he says"

Reiner talked to Salon about "Wolf of Wall Street," his directing career and the film he loves best 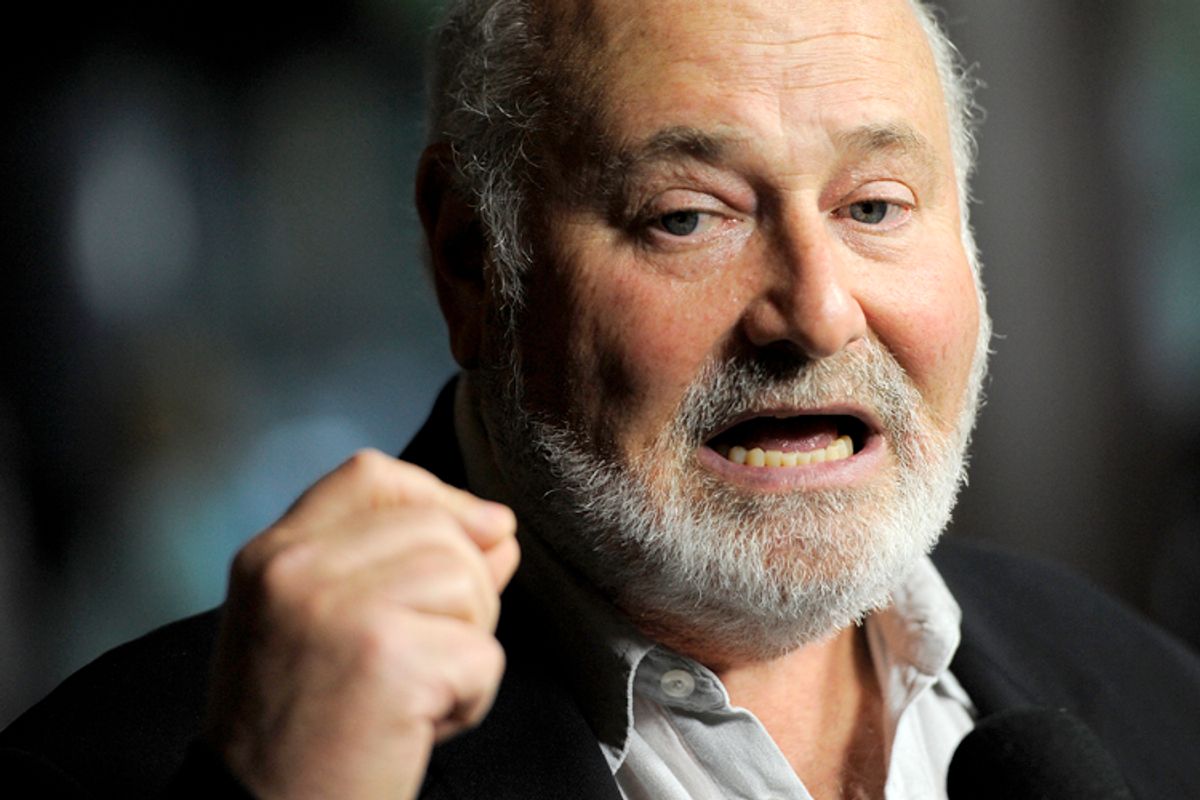 I personally don’t know anyone who doesn’t love a Rob Reiner film. Frankly, if I met someone who actively despised such beloved standards as “Stand By Me,” “This Is Spinal Tap” or “The Princess Bride,” I don’t think we’d share company for very long. After all, this is the man who can still bring me to tears of laughter and joy, be it Spinal Tap harmonizing at Elvis’ grave, or River Phoenix disappearing, literally and figuratively, in “Stand By Me.”  In what initially seemed like a bit of stunt casting, Reiner portrays “Mad” Max Belfort, the rage-fueled father of the drug/sex/money addled Jordan Belfort in Martin Scorsese’s masterpiece “The Wolf of Wall Street.”

Despite his relatively limited screen time, Reiner certainly makes an impression, especially in the film’s funniest scene, involving a particularly ill-timed phone call and the interruption of Max’s favorite T.V. show, “The Equalizer.”  I caught up with the actor/director over the phone to discuss Scorsese, the directing process and what film he holds closest to his heart.

You haven’t been on the big screen in ten years…

I think that’s probably right. I’ve done some acting. In the last couple years I’ve done this part on “New Girl” playing Zooey Deschanel’s father, so that was pretty fun. But as far as being in a film … no. I just did this other film that’s coming out next year called “And So It Goes” that I directed with Michael Douglas and Diane Keaton, and I play a little part in that too. But as far as acting, no.

I have to assume that Scorsese was the impetus, but what else made you want to get back in the game?

You hit it on the head. It is Scorsese. He’s one of the great filmmakers of all time, and when he calls and asks you to be in a movie, you just do what he says. You don’t ask questions. You just show up.

The term “actors’ director” gets thrown around a lot, but is that true of Scorsese, or yourself as a director?

I like to think of myself that way because I’ve been an actor, so I do understand what actors go through. Most actors feel comfortable around me because they know that I wouldn’t ask them to do anything that I couldn’t do. I’m not the greatest actor in the world, but as they say, if you can hit a jump shot you figure everybody should be able to hit a jump shot, so that’s what you do. Scorsese is the ultimate actor’s director because his films are so character-driven, and the character essentially becomes the plot, because he doesn’t plot anything in any traditional structure. He makes the character be the plot. If that’s the case, he understands that in order for that to be successful, you gotta create an atmosphere where the actors can come in and really inhabit the characters, and really play. He sets a tone that makes you feel comfortable; he lets you improvise, he lets you find things, and he knows that if there’s a spark of something that comes out of improvisation, he’ll know that it’s gonna be greater than anything you could possibly script.

Were you able to spend time with Max Belfort?

I never got to meet him or spend time with him. I did get to meet Jordan Belfort, and he told me that his dad was like that; he was very angry and would start screaming and then calm down and be normal.

I’m sure when you met the real Jordan Belfort he was very cordial and nice, but on a personal level, how do you feel about him? Playing his father and Chief Financial Advisor, Max seemed to show unconditional love to his son.

He loved his son, but he was also scared of what his son was doing. He didn’t really approve, and initially I think he was happy about his son’s success, but ultimately I don’t think the extremes and the excess to which his son took things, I don’t think he was too proud of that. I think he was doing the best to reign him in, and was unsuccessful. The way I liken it is to a parent watching his child running into the street with oncoming traffic and you can’t do anything to get them out of there. Your kid could get hit by a car. That’s basically what happened to Jordan. He was completely out of control, and Max couldn’t do anything about it. As much as he loves his son, he says in the film “Jordan, this is obscene what you’re doing. What’s your problem? You have all the money in the world. How much is enough?” He does try to impart some kind of moral compass to his kid, but it doesn’t work.

Jordan reminds me of Henry Hill [“Goodfellas”] in that sense.

It’s interesting you say that because I think Marty is fascinated and drawn to these larger than life characters, whether it’s Henry Hill, Howard Hughes or Jake LaMotta. These are all real people, and he’s fascinated by people who live life on that edge. His exploration of these characters and how detailed they are makes them become the plot. You get invested and are fascinated by them.

Max was described as a guy, and I’m quoting from Jordan’s memoir, “who could unleash his fiery wrath with complete impunity.” Did you have any trouble tapping into that rage?

No, I’ve got plenty of anger to go around for everyone. [Laughs]  They called him “Mad Max” and they did that for a reason. He got so angry because somebody called him up on the phone while he was watching “The Equalizer,” his favorite show. In those days, you didn’t have DVR. There was no TiVo. So if a guy called and you had to get on the phone he was ruining your “Equalizer” experience!

I think it’s directing. I always wanted to, even when I was young. At 19 I had my own improvisational group called The Session. I acted in it, but I also directed the company. I was always drawn to that, and my mind kind of goes to the overall; I look at the big picture. Even though acting is fun for me, my mind sees an overview of things.

Well, you’re very young, and I now officially hate you.

But your movies are touchstones of my generation.  Is there one that is particularly close to your heart?

I get a warm feeling every time I watch it. It reminds me of late summer afternoons.

The interesting thing about the film is that I grew up in the Bronx and New Rochelle, and I know people that have grown up in the city who relate to the film because what it’s about is those friendships that you had at 12 years old, and how close you felt to your friends at that age. It’s just like it says at the end of the film, “I never had friends like I did when I was 12.” People relate to that regardless of whether you come from a rural or urban background.

Do you feel that critics have taken a venomous joy in attacking your later films, like “Rumor Has it” or “The Bucket List”?

With “The Bucket List,” it’s so funny to me because they slammed the hell out of that thing, and I’m thinking this is a pretty good movie!  It’s pretty interesting, these two guys trying to figure out the way they could live out their lives in a way that’s satisfying and fulfilling, and then all of a sudden this term “bucket list” becomes part of the lexicon, and everybody says, “What’s on your bucket list?” Listen, you gotta take it all with a grain of salt. You gotta take the good and bad reviews with a grain of salt because at the end of the day it doesn’t really matter. The question is, “Do the films you make stand the test of time? Do people enjoy them? If you set out to make something, did you achieve what you wanted to do?  Did the audience like it?” Those are the only things I care about.