Climate change by the numbers: The worst is yet to come

CO2 levels went through the roof in 2013, as the world tried — and mostly failed — to slow down warming 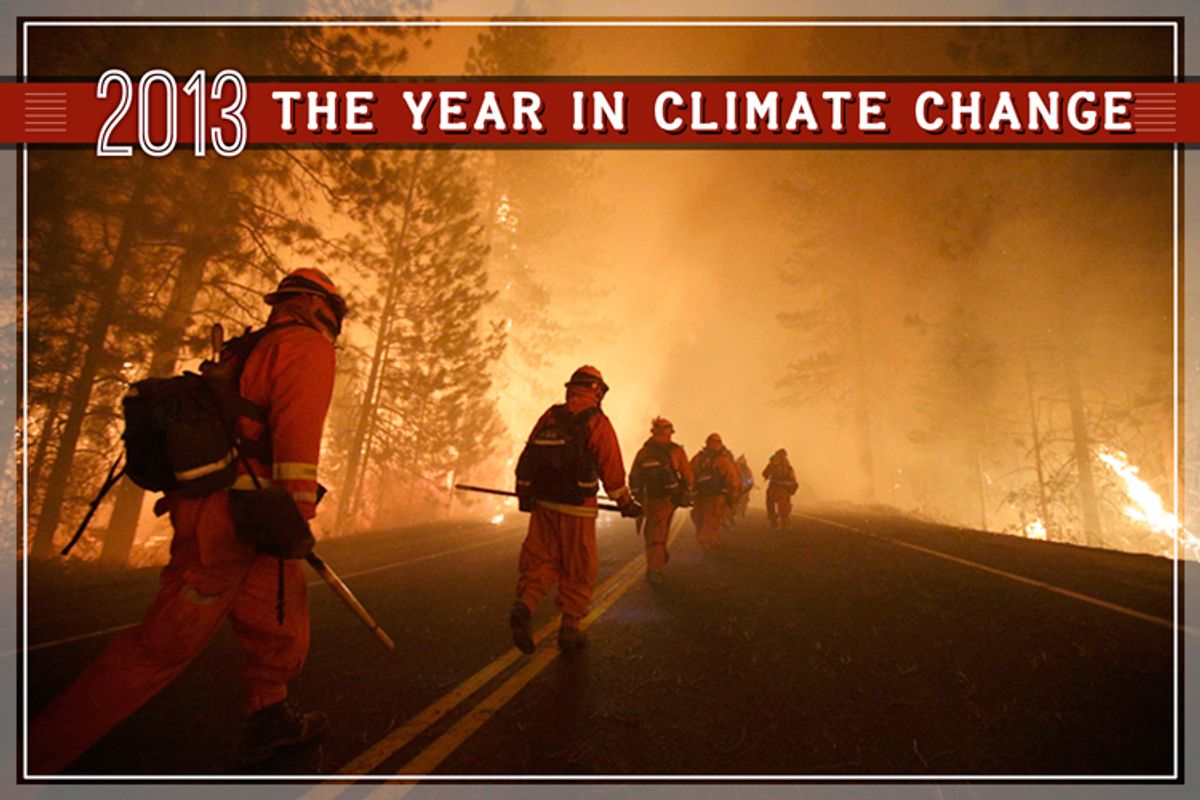 "We will respond to the threat of climate change, knowing that the failure to do so would betray our children and future generations," President Obama announced back in January at his second-term inauguration. Thus began another year of steady climate change, continued pollution of the atmosphere and half-hearted attempts at changing the world's dire trajectory.

By many measures, 2013 wasn't particularly extreme: it it wasn't the hottest we've ever seen; its storms, by and large, weren't the most devastating. Much of what occurred can best be seen as a sign of things to come. Droughts, believed to be exacerbated by climate change, will become more widespread. Wildfires are expected to get bigger, longer and smokier by 2050. Twelve months, after all, is but a short moment in Earth's history. Only in the future, looking back, will we be able to recognize the true significance of many of this year's big numbers:

7: Where 2013 ranks among the warmest years in history, according to the World Meteorological Association. Tied with 2003, the ranking is based on the year's first nine months, during which average temperatures were 0.86°F above the 1960-1991 global average.

395.5: The average concentration levels of CO2, in parts per million (ppm), observed in the atmosphere through November.

400: The "milestone," in parts per million of atmospheric CO2, that was temporarily crossed in May. It was the first time carbon levels crossed that boundary in 55 years of record-keeping — and possibly in 3 million years of history on Earth.

95: Percent certainty with which IPCC scientists say climate change is caused by human activity, a confidence level up from 90 percent in 1997.

1,100: Amount by which EPA regulations proposed in September would limit emissions from new coal-fired power plants, in pounds of CO2 per hour. The average plant currently emits CO2 at a rate of 1,800 pounds per hour.

25: The factor by which the concentration of PM 2.5 — the part of air pollution most harmful to human health — exceeded the amount considered safe in the U.S. when Beijing's first "airpocalypse" occurred in January

1,000: Air pollution levels in the Chinese city of Harbin, in micrograms per cubic meter of PM 2.5, during October's smog emergency. According to the World Health Organization, it shouldn't exceed 20; anything higher than 300 is considered hazardous.

8: Age of girl in Harbin who contracted lung cancer.

3.8: Percent by which Japan said it would try to reduce its emissions by 2020, down from its  previous pledge of 25 percent.

1.97 million: The annual minimum extent of Arctic sea ice, in square miles. Melting this year wasn't as severe as it was in 2012, but the remaining area was still 17 percent below average — and the sixth lowest on record.

104.6: The average country-wide temperature, in degrees Fahrenheit, on January 7 in Australia — the continent's hottest day on record, in its hottest month on record.

121.3: The temperature reading, in degrees Fahrenheit, in the South Australian town of Moomba on January 12.

90: Percent confidence with which researchers at the University of Melbourne concluded, in July, that “human influences on the Australian atmosphere had dramatically increased the odds of extreme temperatures.”

129.2: The temperature, in degrees Fahrenheit, recorded in California's Death Valley on June 30, setting a record for the hottest temperature ever recorded on Earth for that month.

2: The weather emergency level declared by officials in China during this summer's heat wave — a number normally reserved for typhoons and floods.

1.7 billion: The estimated cost, in USD, of New Zealand's drought — its worst in 30 years.

10: The number of consecutive months during which over half of the contiguous U.S. experienced moderate or severe drought, which finally fell below 50 percent in mid-April 2013.

72: Percent of land area in 10 Western states in drought conditions after a record-breaking heat wave in June.

3.95: Inches of rain that fell from January to November in San Francisco. When the final numbers come in, it's likely that California will be found to have had its driest year on record.

257,000: Acres of land burned by the California Rim Fire, the biggest wildfire in Sierra's recorded history, which caused over $50 million in damage. It was caused by a number of factors, drought and abnormal seasons included.

5.9 - 7.9: The amount of rain, in inches, that normally falls over two and a half months and instead pummeled central Europe between May 30 and June 1. Floodwaters in Germany rose to their highest levels in over 500 years.

1.3: The width, in miles, of the tornado that struck Moore, Oklahoma on May 20. Sen. Sheldon Whitehouse, D-R.I., caused controversy when he invoked the storm during a speech criticizing climate deniers. While researchers cannot be sure there was a link between climate change and the twister, they believe that a warming planet may host more frequent, stronger storms.

2.6: The width, in miles, of the tornado that struck El Reno, Oklahoma ten days later. It was the widest ever measured on Earth.

20 billion: Cost, in dollars, of plans laid out by NYC Mayor Bloomberg in June to make infrastructure improvements, including floodwalls and storm barriers, in preparation for the effects of climate change.

6,100: The most recent death count from Typhoon Haiyan, which officially became the deadliest storm in Philippines' history. Bodies continue to be recovered.

132: The number of countries that walked out of the U.N. climate talks in Warsaw in protest over rich nations' refusal to entertain the idea of compensation for extreme climate events

90: The number of global companies that together account for two-thirds of greenhouse gas emissions, according to a report in the journal Climactic Change.

7 billion: The number of "key individuals" responsible for climate change. The Onion, as always, is spot on.