The best and worst music moments of 2013

From Miley's missteps to Beyoncé's triumph, it's been a roller-coaster year for music 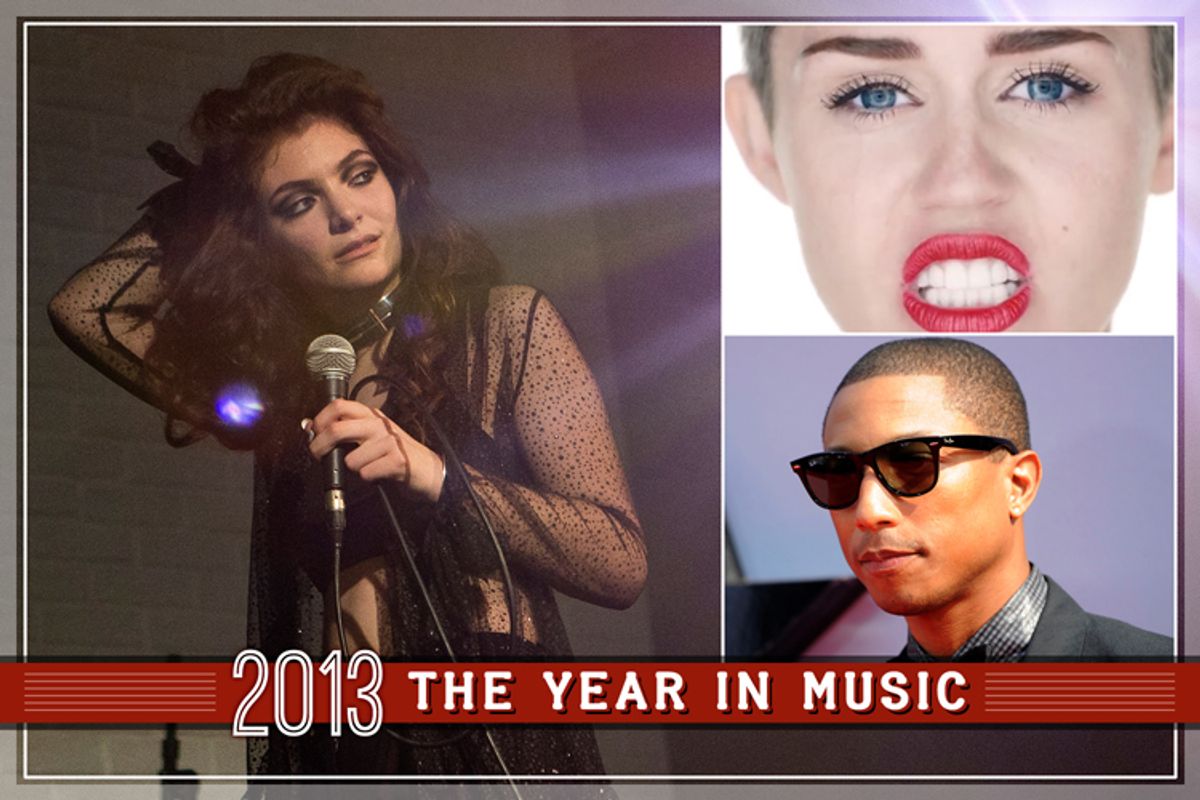 December: That time of year when every music publication rolls out its year-end coverage and you end up reading countless lists of the same albums and singles arranged in slightly different order. Will Vampire Weekend be #1 or #2? Where will “Yeezus” fall? What will be the obligatory wild card in the top ten? Chance the Rapper? Phosphorescent? Brandy Clark? John Fogerty?

It’s all too easy to get bored with year-end coverage well before the year even ends. And yes, Salon is about to add more to the bounty of lists clogging pages both digital and paper this month. Rather than another ranking of “best” albums or “best” songs, we thought we might make the criteria as broad as possible and list some good things and some bad things about music in 2013. Nothing definitive, of course, and certainly not ranked in numerical order. This is just some stuff we liked and some other stuff we didn’t.

Miley’s other big single is a stone-cold karaoke classic, destined to be sung earnestly, perhaps drunkenly and certainly pitchily at bars for many years to come. And with good reason: It’s got a chorus that crashes at your ears like that thing in the title, and Cyrus shows off her amazing pipes as she not-so-subtly comments on her split with fiancé/footnote Liam Hemsworth. A cynical listener might surmise that the break-up was merely part of a promotional campaign for the single, but once you get onstage and start singing “You wreck me,” you won’t care.

BAD THING: Pretty much everything else about Miley Cyrus

You couldn’t release an album in 2013 without devising some archaic symbol or making a video with Marina Abramovic or broadcasting your own visage five stories high around the world. At first these big rollouts were fun, especially Daft Punk’s listening party in the Australian outback. After a while, however, they came across like naked attempts to turn expensive albums into event releases, which means they became tedious and — in the case of Kanye’s “minimalist” white t-shirt at $125 — completely ridiculous.

Just last week Beyoncé unleashed her self-titled fifth album with no fanfare whatsoever and ended up owning the Internet for a few days. It was as much of a stunt as anybody pulled, but it didn’t try anybody’s patience, it didn’t embarrass the artist and it moved somewhere in the neighborhood of 600,000 copies in less than a week.

This may go down as the best year for country music in many moons — or at least a year when even non-country fans could find something to love about new albums by Ashley Monroe, Brandy Clarka and Kacey Musgraves. Steeped in classic country sounds but thoroughly modern, they challenged the conventions of the notoriously conservative genre without coming across as preachy or condescending, and Musgraves in particular scored a hit with the progressive-minded “Follow Your Arrow,” on which she encouraged her listeners to “kiss lots of boys … or kiss lots of girls, if that’s what you’re into.” That line raised some eyebrows, but Musgraves (who co-wrote the song with Clark and Shane McAnally, both of whom are gay) understood that country fans aren’t quite as closed-minded as the industry might assume.

Even as a new wave of singer-songwriters emerge in Nashville, the old guard of hat acts continue to rule the city, with acts like Blake Shelton, Luke Bryan and suspicious upstarts Florida-Georgia Line spitting out the same blah sentiments about small towns and boat parties against Bon Jovi guitars and the most rudimentary hip-hop beats. And then Shelton had the audacity to badmouth traditional country: "Nobody wants to listen to their grandpa’s music,” he told GAC “Backstory.” “And I don’t care how many of these old farts around Nashville going, ‘My God, that ain’t country!’ Well, that’s because you don’t buy records anymore, jackass. The kids do, and they don’t want to buy the music you were buying.” Never mind that he’s married to a woman who refutes every word of what he’s saying.

In which an Australian teenager scores an international hit with an astute piece of music criticism that exposes the emptiness of pop glitz and tries replace with something a bit more real, a bit more exciting, a bit more meaningful.

How is this guy still going? Years after the fifth time I thought his career had nose-dived, Williams is still going strong as a producer and singer on two of the most popular singles of the summer: Robin Thicke’s “Blurred Lines” and Daft Punk’s glorious “Get Lucky.” He’s the R&B Rasputin. He can’t be killed.

“The 20/20 Experience” was supposed to establish JT as a true artist, a juggernaut and the heir to Michael Jackson’s pop throne. Yet, this pair of overstuffed albums was heavy on concept and dapper beats, light on hooks and payoff and sadly subject to cheesy songwriting along the lines of “Pusher Love Girl.” His songs were decked out in designer tuxes, but ultimately they were all dressed up with no place to go.

Paisley’s notorious flop, off his otherwise strong “Southern Comfort Zone,” is easily the worst single of the year, a well-intentioned yet stunningly naïve track about expunging racism in America. “It ain’t like you and me can re-write history,” went Paisley. “If you don’t judge my gold chains, I’ll forget the iron chains,” went LL. “What the hell?” went everybody else.

Suddenly writers and critics who wouldn’t know Cowboy Troy from Cowboy Jack Clement jumped in to denounce “Accidental Racist” as confirmation of every straw man misperception about country music as cultural backwards, socially retrograde, just plain dumb. But where were they when Paisley released “American Saturday Night,” an affectionate ode to American multiculturalism? And where were they when he gave a thoughtful interview to Jody Rosen where he laid out the song’s intentions, shouldered the blame for its failure and turned a faceplant into a teachable moment?

Twenty years after their groundbreaking “Loveless” — whose legacy seems to grow every day — My Bloody Valentine returned with only their second album, simply little “m b v.” Suddenly it was 1992 all over again, with head Valentine Kevin Shields indulging his supernatural knack for queasy-beautiful guitar lines, dense rock textures and shimmery melodies. The term “shoegaze” may be as old as “Loveless,” but “m b v” sounded almost impossibly of its moment.

It’s a wave of mutilation alright: Working overtime to destroy any last bits of good will its fans might have for the band, the Pixies have spent the last decade or so on the road rehashing the same old hits with all the enthusiasm of office drones discussing third-quarter profit margins. But it all came to a head in 2013: Frank Black fired bass player Kim Deal because of course he did. He then fired her replacement, presumably out of muscle memory. It was as sordid as a soap opera, but the worst thing the Pixies did was release new music. “EP-1” was four new songs that sounded like some third-tier alt-rock band whose claim to fame was opening for Vertical Horizon. It was a kick in the shins to anybody who ever screamed along with “Debaser,” and rock bottom for a band that deserves better.

GOOD THING: The hook on Haim’s “The Wire”

Was this thing engineered by NASA?

BAD THING: The entire concept of “What the Fox Says”

It’s supposed to be parody, but listeners turned it into a hit, rendered dubstep as kiddie music and turned this supremely annoying pisstake into a sporting event classic. Do you know what your team’s mascot say? Boo.

Two songwriters from the South, both with roots in Memphis, hit rock bottom and lived to tell about it. Missisippi-born, California-based musician John Murry kicked heroin and chronicled his long slide as well as his shaky rehabilitation (not to mention his reunion with wife and daughter) on his harrowing debut “The Graceless Age,” which is anchored by the ten-minute exorcism “Little Red Balloons” conveying the horrors of detox. Former Drive-By Trucker Jason Isbell made his best album only after he got sober, but refused to wallow in the depths of addiction. Instead, he penned songs like “AAAA” and “Traveling Alone,” which are haunted by the reckless man he once was and fears he might still be.

BAD THING: The cover for the Yeah Yeah Yeahs’ “Mosquito”

The album itself was lackluster, but the album cover was an affront to the very idea of album covers. A chintzily digital update on the old Garbage Pail Kids aesthetic, it features a giant mosquito, a messy baby and the dumbest font this side of Comic Sans. What bet did Karen O lose?

GOOD THING: “Looking for the Magic” in “You’re Next”

The inventive horror flick “You’re Next” hinges on the use — and intentional overuse — of Dwight Twilley’s power pop classic “Looking for the Magic,” which provides a chipper counterpoint to the grisly murders that take place while it plays. It was one of the most inventive uses of music in cinema all year.

The Mandela biopic hasn’t gotten good reviews, nor has U2’s theme song, “Ordinary Love.” Rather than penning another “Pride (In the Name of Love),” the Irish band, who seem so perfect for the job that they might have already had the song written years ago, turned in an insipid ballad that does its inspiring subject a grave disservice. Choice lyric: “Your heart is on my sleeve / Did you put it there with a magic marker?”

The thing that made Daft Punk’s “Get Lucky” so damn infectious and danceable was Nile Rodgers, the Chic guitarist turned super-producer turned junkie burnout who made the comeback of the year as a guitar god on “Random Access Memories.” Without taking any solos or even showing off, he elevated the position of rhythm guitar to lead, delivering the most solid and memorable riff of the year.

Following the release of his instantly forgotten solo record “Old Sock,” Slow Hand was the subject of two reissues this fall — “Give Me Strength” and “MTV Unplugged” — along with a double-live-album souvenir of his Crossroads Guitar Fest. “Give Me Strength” is so wishy-washy you wonder why he even bothers to sing on his songs, and “MTV Unplugged” would have been the worst album of the 90s had Rod Stewart not recorded an “Unplugged” session too. But the worst is the Guitar Fest wankfest, which showcases axemen young and old showboating politely and with no little self-satisfaction.