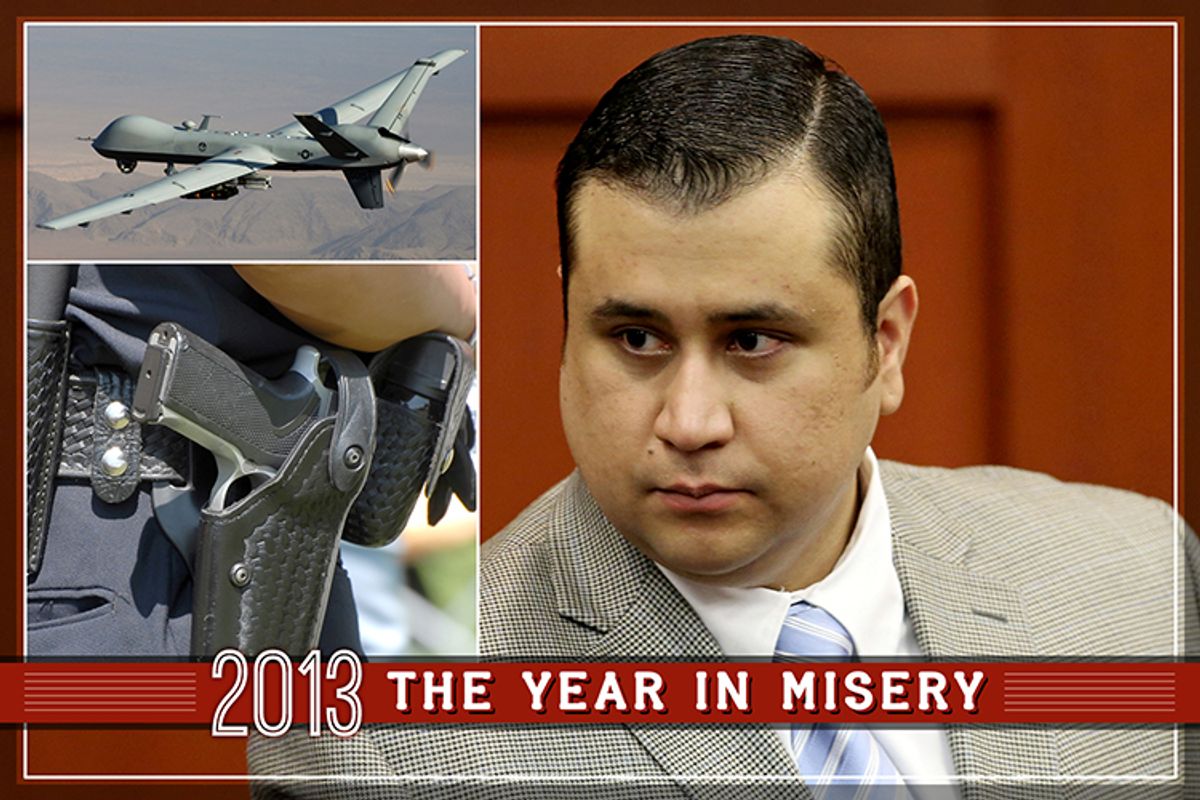 Misery, some say, possesses a strange quality. Like pain, you can't have misery and not know it. Misery, then, is a miserable situation realized and felt.

A number of the major civil liberties stories of 2013 were not related to discrete events of the year. The NSA did not begin its dragnet surveillance of ordinary citizens this year, nor did U.S. drones first eviscerate civilian bodies in Pakistan and Yemen. But 2013 saw these and other stories revealed in force to the American public. As a year marked by revelation (and authoritarian attempts to quash revelation), 2013 was a big year for misery -- making known and felt our troubling state of current of affairs.

As with any end-of-year list, mine is far from exhaustive and further still from complete. Here I offer just a slim reminder of some events and revelations of the last 12 months in a Grinch-like effort to chill your holiday cheer. I've restricted myself to a U.S. focus; that the news cycle here regularly does the same is a miserable fact in its own right. Without further ado, your year in misery:

The state of total surveillance

The revelations, based on NSA whistleblower Edward Snowden's trove of leaked documents, started flowing in August. We learned that the spy agency with the aid (sometimes willing, sometimes coerced) of tech and telecomm giants has been hoarding data on nearly every communication within and going out of the U.S. The NSA, we also learned, structurally weakened the strength and integrity of encryption standards (essentially weakening the security of the very Internet to enable easier surveillance). Snowden's predecessor in NSA whistleblowing, Thomas Drake, summed up the problem at the root of the NSA's hoarding complex for Salon: "We are all persons of interest now."

And, perhaps most miserable of all, the realization driven home this year that our use of and reliance on globalized technological connections -- the very apparatus through which we live and communicate -- has rendered us prime targets for total surveillance. As my colleague Andrew Leonard noted, "in 2013, the negative consequences of our contemporary lifestyles were impossible to ignore."

The war on information

The individuals who have worked and risked so much to make public the extent of our sprawling surveillance state have faced more misery still: Journalist Glenn Greenwald's partner David Miranda was detained for nine hours at a London airport under an anti-terror law and Snowden himself, currently in hiding in Russia, faces charges under the Espionage Act for his crucial act of shedding light.

But Snowden was hardly the only victim of the U.S. government's war on information (as Justice Department whistleblower Jesselyn Radack describes it) -- a war that hit terrifying stride this year.

Chelsea Manning was sentenced to a chilling 35 years for passing a vast trove of classified documents to WikiLeaks, revealing gross military misconduct and illegality. It will be almost nine years before she can seek parole from her detention at a male military prison. As I wrote at the time of sentencing: "For Manning, the matter now is time, presented and handed down within two minutes of sentencing: the cold, hard but ineffable fact of over three decades in prison."

Perhaps this year's most tragic victim in the war of information was 26-year-old Aaron Swartz. The brilliant technologist who, facing up to five decades in federal prison for downloading millions of academic articles, committed suicide in January. His story was a horrifying example of not only prosecutorial overreach, but a legal system in which the concentration of power is uniquely placed in the hands of prosecutors, the persecution of whistleblowers, activists and dissenters is rife, and cybercrime laws are dangerously outdated and broad.

Other lowlights in the war on information this year include the 10-year federal sentence handed to hacktivist Jeremy Hammond for his role in Anonymous' Stratfor hack (which helped reveal some of the shadiest aspects of the corporate-government intelligence nexus). It was also revealed in May that the Department of Justice had been collecting the phone records of AP reporters and that in 2010 an FBI agent had described Fox News correspondent James Rosen as a possible “co-conspirator” in a crime for the journalistic act of obtaining leaked information from a State Department source. As Jesselyn Radack told Salon, "The main-stream-media has finally woken up to the fact that the Obama administration’s unprecedented crackdown on whistleblowers is really a war on the First Amendment." Let's hope 2014 sees this wake-up call turned into a rallying cry to fight back.

2012 ended in horror when 20-year-old Adam Lanza gunned down 20 children and six adults at Sandy Hook elementary school. The mass murder of 6- and 7-year-old children (and the second deadliest mass shooting by a single person in American history, after the 2007 Virginia Tech massacre) prompted a surge in gun control activism (and Second Amendment-loving reactionary fervor) as well as a flurry of Capitol Hill grandstanding over guns and mental health provisions in the U.S. early this year. But 2013 saw a miserable lack of action on gun control; even a narrow provision to expand background checks failed in the Senate.

Meanwhile, the last 12 months saw 23 shooting incidents in U.S. schools and colleges, which left a total of 19 people dead. Among the more horrifying school shootings, a 12-year-old opened fire with a semi-automatic handgun at the basketball courts of Sparks Middle School in Nevada, killing a teacher who attempted to shield his students. The seventh-grade shooter then committed suicide by shooting himself in the head.

2013 saw a host of so-called police-involved shootings. Regularly, the police involvement including opening fire and slaughtering or maiming unarmed individuals. A few examples: Cops in Sonoma County, Calif., shot dead 13-year-old Andy Lopez as he walked home from school carrying a toy rifle; police in Georgia arrived at the home of a woman who had called for 911 assistance to help her diabetic fiancé. Witnesses claim that police shot dead Jack Lamar Roberson as he approached them unarmed, strongly denying police claims that he was carrying a knife. In September, NYPD officers shot at an unarmed, emotionally disturbed man in Times Square after he was lurching around near traffic -- the cops missed the target and struck and injured two bystanders. In an incident that was reflective of a media resistance to point blame at police officers, when shots were fired on Capitol Hill in October, the story centered around an armed attacker. In fact, cops shot at an unarmed woman in a car with her toddler.

Also of note in early 2013 misery was former LAPD officer Chris Dorner's rampage, which led to the death of four people, including three cops, ending in a manhunt and Dorner's dramatic death in a mess of fire and bullets and, finally, a self-inflicted shot to the head. Dorner's spree was significantly accompanied by a manifesto published online, which decried LAPD racism and use of excessive force.

The shooting of 16-year-old Kimani Gray on a Brooklyn street bolstered fierce anti-police sentiment in New York, already high after a series of police shootings of unarmed young black men in 2012 and ongoing stop-and-frisk harassment.

(Special mention in misery here goes to New York City and its "finest" for continually pushing back against efforts to reform racist stop-and-frisk practices. We thank outgoing NYPD commissioner Ray Kelly, who leaves his post defiantly defending a legacy of police harassment of black and brown New Yorkers).

Journalist and author of "Dirty Wars" Jeremy Scahill was told by a witness to the aftermath of a U.S. drone strike in Yemen that animal and human corpses could not be distinguished: All that was left was meat hanging from trees.

This year, thanks in large part to the work of groups like Human Rights Watch, Amnesty International, the Bureau of Investigative Journalism and activists in drone-struck regions, the horrors of CIA and military drone wars have come increasingly to light. The revelations of 2013 -- particularly of civilian deaths and the use of "signature strikes" -- made clear that "targeted" killing was a misnomer for drone strikes indeed.

Reports strongly challenged Sen. Dianne Feinstein's suggestion that civilian drone deaths each year were in the single digits (a comment made during the confirmation hearing for the CIA directorship of drone czar John Brennan this year). According to the BIJ, up to 951 civilians may have been killed by drones in Pakistan alone since 2004. Two detailed reports released in October, one from Amnesty International and one from Human Rights Watch, constitute the most in-depth studies into the civilian cost of life wrought by U.S. drone strikes. Both studies offer up specific evidence of dozens of civilian deaths, constituting war crimes.

Meanwhile, pressure mounted against the Obama administration to reveal previously heavily concealed details about the legal framework used to justify drone strikes. Sen. Rand Paul even pulled a nine-hour filibuster against Brennan's CIA director nomination over the issue of whether U.S. citizens could be targeted. After two years, the U.S. government formally admitted to killing four U.S. citizens in drone strikes, including Anwar al-Awlaki and his 16-year-old son. The justification formally offered for killing the teen? Obama senior adviser Robert Gibbs said the boy "should have [had] a far more responsible father."

Alongside CIA strikes in Yemen, Pakistan, Somalia and likely beyond (this war is without border or bounds, after all), the U.S. military oversaw drone strikes in Afghanistan and Iraq. Notably, in misery, a September strike in Helmand killed 14 Afghan civilians, largely related to each other. "There were pieces of my family all over the road," said 28-year-old farmer Miya Jan. "Do the American people want to spend their money this way, on drones that kill our women and children?" he asked.

Once again this year, the U.S. came out a miserable top in incarceration rates. Its prison population of 1.6 million is the largest in the world. A damning Human Rights Watch report released at the beginning of this year noted the U.S. prison system was characterized by “practices contrary to human rights principles, such as the death penalty, juvenile life-without-parole sentences, and solitary confinement." The report fond these practices "common and often marked by racial disparities.” The report notes that while whites, African-Americans and Latinos have comparable rates of drug use, African-Americans are arrested for drug offenses, including possession, at three times the rate of white men.

Guantanamo Bay detention center is still open. The 2014 National Defense Authorization Act includes an end to regulations hampering the long-overdue transfer of detainees out of the prison camp, but 2013 was a miserable year indeed in Gitmo. A six-month hunger strike, which at its peak saw more than 100 of the camp's 166 detainees refusing food, called for an end to mistreatment within the prison and more broadly for the detention center's closure. Dozens of strikers were brutally force-fed -- a procedure decried by the international medical community.

A 60-day hunger strike that at one point involved 30,000 inmates, but received miserably little media attention, called for an end to the widespread use of solitary confinement.

Trayvon Martin's killer was acquitted of murder in July. One juror, already regretting her decision, has stated "George Zimmerman got away with murder." And the vigilante carried on to reportedly threaten both his ex-wife and then a girlfriend with a gun (during the latter incident, as Joan Walsh noted, Zimmerman made a chilling 911 call trying to frame his girlfriend -- just like he did Trayvon Martin). He also toured the factory that produced the weapon he used to kill Martin. Truly, he has been an ongoing font of misery this year.

And so, we head into 2014 with every misery listed above ongoing and many more unmentioned here. I leave you, then, with the words of one of the victims of 2013, jailed hacktivist Jeremy Hammond: "There is so much work to be done."