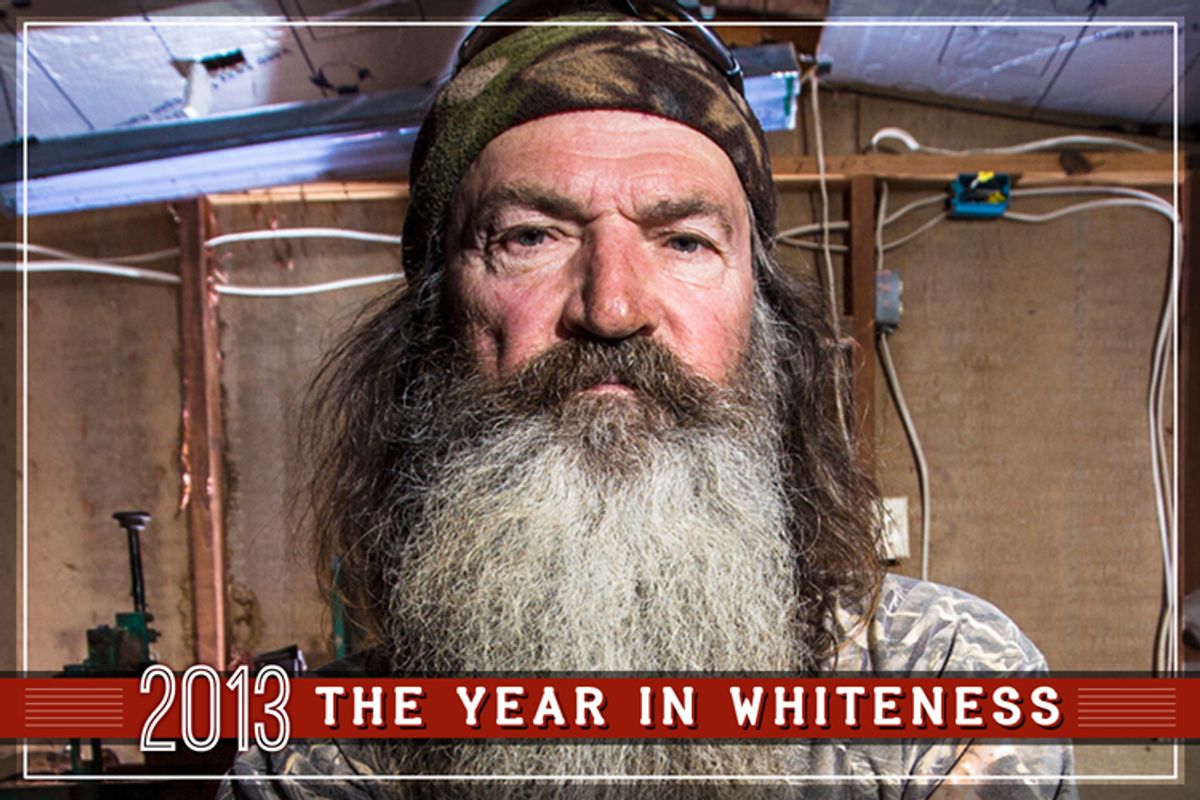 Maybe it was the very fact of enjoying a wonderful Christmas with my family and friends, against the manufactured backlash to a nonexistent “War on Christmas,” that let me appreciate the perilous mental state of a small but noisy and paranoid swath of white America. Somehow over the holiday it became clear: 2013 was the year white grievance mongering became an uglier and even more lucrative racket.

Fox News has been peddling the phony “War on Christmas” for years, of course, but it took new Fox phenom Megyn Kelly to give it an explicitly racial cast. Not only did Kelly wage war against the menace of a black Santa – declaring nonsensically that the fictional character of Santa Claus “just is white” – but when she was called on it, she made herself out to be the victim of politically correct bullies, race-baiters and Fox haters. Suddenly it was clear: The imagined war on Christmas has become an equally farcical war on whiteness in the minds of those sad right-wing warriors.

The next week, “Duck Dynasty’s” Phil Robertson also became a martyr for the white right, after A&E briefly suspended him for holding forth on the nastiness of gay sex while insisting African-Americans were happy in the Jim Crow South.

The new hysteria and hypocrisy was crystallized by one surreal fact: While paranoid white righties were fighting for their allegedly endangered right to celebrate Christmas (with their white Santa), they could watch a “Duck Dynasty” Christmas marathon on A&E, underscoring that there’s neither a war on Christmas nor on bigoted pseudo-Christians like Robertson. But there’s a lot of cash to be made, and fear to be stoked, by claiming both.

Kelly and Robertson and kindred spirits like Sarah Palin charted a bold new civil rights frontier in 2013: fighting for the right of white people to say false, stupid and bigoted things without facing criticism, let alone paying any real penalty. Palin has long made herself out to be a victim of mean liberals, but this year her anger-mongering took on a more explicitly racial tinge. She bashed Jeb Bush for casting aspersions on the fertility of white people -- Bush did make an admittedly stupid remark about immigrants being “more fertile,” but if you thought that would get him in trouble with immigrant groups, not whites, you thought wrong – and later in the year declared her inviolable right to equate the federal deficit she wrongly blames on our first black president with “slavery.” She closed the year announcing she stands with Phil Robertson, even though she had to confess to Fox’s Greta Van Susteren that she hadn’t read the GQ interview that got him in minor temporary trouble.

2013 was also the year that George Zimmerman was acquitted of the murder of an unarmed black 17-year-old, Trayvon Martin, allegedly in self-defense, becoming a cultural hero to some of that same paranoid white right. If you have the misfortune of stumbling into the Twitter sewer that is TheRealGeorgeZ’s timeline, you’ll find an exaggerated sense of white grievance (please spare me the insistence that Zimmerman is Latino; he has seemed uninterested in identifying as such, at least publicly, and in any case his Latino heritage wouldn't necessarily erase his whiteness).

I guarantee everyone 1 thing, Phil Robertson is not losing sleep over getting to spend more time fishing, loving his family and The Lord.

Robertson has come in for more criticism for his anti-gay remarks than his inanity on race, although it's a little hard to take any of it seriously. Apparently the Robertson boys are yuppies dressing up as rednecks for profit, and A&E is laughing with them all the way to the bank. But the way the right has made Robertson a hero for his crude racial and homophobic remarks shows the way victimhood has become a crucial part of the white grievance industry.

Of course, the stoking of white grievance is nothing new. It was at the heart of the GOP’s so-called Southern strategy, which always had a crucial Northern component: deliberately inflaming the anxieties of white working-class Southerners and Northern “ethnics” about racial and economic change. I have been someone who tried to see and point out the elements of those grievances that weren’t racial, but real: the genuine erosion of economic stability and opportunity for the white working and middle classes. (I wrote a book about it.) And early in 2013 I endured my own mini-backlash for suggesting, in “How to Talk About White People,” that sometimes Democrats and social-justice advocates talk about race in ways that are unnecessarily divisive and punishing to whites.

I was honestly unprepared for the criticism, but I understand it better now. To suggest that there’s any way that the rhetoric of either “people of color” or racial liberals is to blame for white paranoia and racism seems like the essence of victim blaming. Of course that wasn’t my intent; I would argue that it stemmed from a very human impulse to try to feel you have some kind of control over forces you don’t. Sadly, or not, I realized this year that liberals have very little control over the way white people respond to racial change (though I will always argue that economic populism has more power to build cross-racial coalitions than the pro-Wall Street, multiracial neoliberalism practiced by too many Democrats over the last 20 years).

I’m optimistic nonetheless. A little under a year ago I wrote an obituary for former New York Mayor Ed Koch, outlining how the formerly liberal Democrat rode a wave of white fear and grievance into Gracie Mansion in 1977. I couldn’t know it at the time, none of us did, but New York was about to elect its first Democratic mayor in 24 years, a staunch progressive on racial issues with an African-American wife and two biracial children. An ad that tried to depict Bill de Blasio as an anti-police lefty who’d lead New York back to the crime and chaos of the ’70s and ’80s backfired; so did the ravings of Rupert Murdoch’s New York Post, which did so much to help elect Koch.

De Blasio’s landslide win, among every racial and ethnic group, showed that white New Yorkers are ready to embrace the city’s multiracial future and tackle its lingering racial and class inequities. The mayor-elect's influential "tale of two cities" is largely, though not exclusively, a tale of white and nonwhite New York. Red state demagogues can mock New York as a lonely blue island irrelevant to the rest of the country. But the city helped invent both liberalism and the backlash that tore it down. I’m going to bet that the de Blasio coalition has more influence, in the end, than Phil Robertson or George Zimmerman, Megyn Kelly or Sarah Palin. A noisy, paranoid white backlash against racial change may be inevitable, but it will also pass. That’s what scares them.