From big blockbusters to indie hits, these games will entertain you — and make you think 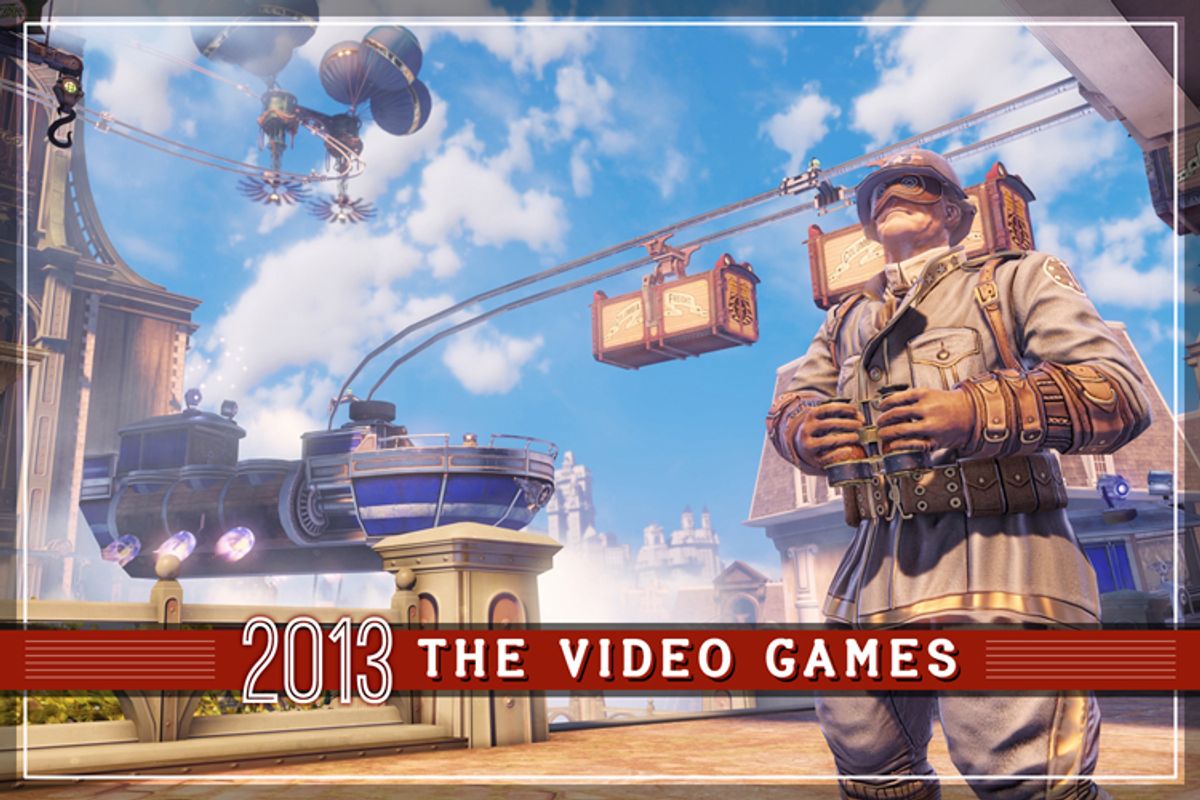 It was a weird, fun year for video games. The indie developers looked stronger than ever, the new generation debuted to both fanfare and uncertainty, the Wii U looked dead in the water and the fate of Nintendo has never looked more tenuous. But through all the industry hiccups and hand-wringing, great games continue to be made. This is a personal list of my nine favorite games from this year, all apologies to "Brothers: A Tale of Two Sons," "The Legend of Zelda: A Link Between Worlds," "Swapper," "Assassin’s Creed IV," "Fire Emblem Awakening" and plenty of other games I’ve yet to spend significant time with.

I’ve written a lot about the high-minded artisanal qualities of video games in this space, so I can understand why a game like "Dead Rising 3" might look a little silly. You’re right, it’s a big dumb zombie apocalypse full of idiot characters and hair-raising debauchery. This is a game that allows you to suplex a zombie, and you can strap a car battery to a sledge hammer to create a crackling harbinger of doom known only as the Electric Crusher. Yes, there are a lot of dumb things about "Dead Rising 3," but for all the buttoned-up, straight-faced launch titles trotted out with the shiny new PS4 and Xbox One, the silliest game was also the one with the most staying power. Keep your void, anchorless gun-totes, "Call of Duty"! Keep your stodgy, sterilized racing, "Forza Motorsport"! I’ll play the game that lets me wear a welding mask, while driving a cement roller through the undead horde.

Consider this a bit of an honorable mention. Pokémon X and Y fills its role perfectly: a new Pokémon game, following the exact same template that has sustained the franchise since 1998. You are a hapless boy born into a benevolent world and taken under the wing of an enterprising professor who introduces you to the wonderfully binary world of Pokémon. You catch strange little monsters, train them in combat, and challenge a league of “gym leaders” who, if victorious, will give you a badge. It’s a formula that’s built an empire, and decades later, it still somehow works. There’s a bit of existential dread to Pokémon, because realizing you’ve committed a significant portion of your finite existence to watching small numbers become slightly bigger numbers in the stat-sheets of your ragtag team of kidnapped creatures can drive a person to drink, but I don’t care. "Pokémon X and Y" is pure Zen, a franchise humming along so tunefully you almost forget that you should probably be doing something else.

The "NBA 2K" series has remarkable focus. While Madden scrounges up a handful of quirky, two-dimensional features to help refresh their annualized franchise, the developers at Visual Concepts have only ever wanted to simulate basketball. It gets a little cleaner, and a little realer, every single year. You see it in the anguish on the faces, or the riffled tendons in the calves. You see it in J.R. Smith’s pencil-thin moustache, Joakim Noah’s spindled hair and the obsessive, perfectly-realized tattoos searing up Derrick Rose’s arms. You hear it in the live, fiery commentary captured in-the-moment from Kevin Harlan, Clark Kellogg and Steve Kerr. It might be just a basketball game, but the passion is always transcendent.

It’s yet to be seen if "Kentucky Route Zero" will capitalize on its gorgeous setting and delectable mystery. We are, after all, only two episodes in. But so far the little independent adventure has given us a delightfully twisted Americana. Pinging drones, ghostly characters, gorgeous low-def sunsets and a folk band that seems to exist somewhere outside of time and space. We’ve not seen its conclusion, but "Kentucky Route Zero" has already left a mark.

I’ve actually missed Lara Croft. For all of the teen-boy fantasies, primitive character design and backwards PS1 nostalgia, Croft still remains one of gaming’s most visible protagonists. A series of middling to disastrous games have tarnished her legacy to near-Sonic levels, but developers Crystal Dynamics rescued a franchise worth saving. The reboot lets Lara build her own circumstances — not as a gun-toting vixen but as a determined explorer. It’s a simple game, split between chaotic combat sections and long, meditative exploration. Crystal Dynamics slowly raised the stakes, until only Lara Croft could save us. Together, we watched the tomb raider be molded in front of our very eyes.

"Papers, Please" is obvious social commentary. A low-paid immigration agent handling the border between two fictional eastern European countries, you filter through paperwork under the constant scrutiny of your overbearing superior officer. It’s an obvious satire of byzantine bureaucracy and how pettiness can quickly damage lives, but what makes "Papers, Please" great is its winding, multifaceted plot construction. It’s a game with dozens of endings, and depending on the actions you take in your diminished role, you could find yourself wrapped up in an international conspiracy or facing life in prison. It’s a story told slowly, deliberately and perfectly ingrained into its gameplay. Never underestimate the power of a good mystery.

Have you ever wanted all access to a house? To creep around the hallways, read through the journals and thrown-away letters? To see what’s behind the safes and under the beds? The search history? The boxes in the basement? "Gone Home" engages all of our eavesdropping inclinations, and tells the story of a fairly normal family, living in a fairly normal house, somewhere in the Pacific Northwest. It’s the mid-90s, you’ve been gone for a year; what’s changed? And more importantly, where has your family gone? "Gone Home" tells a personal, and wonderful heartfelt story, the empathy radiates from every angle. Even if you’re completely unfamiliar with modern video games, this one is definitely worth a shot.

"Bioshock Infinite" fooled me. A whole new city, in a whole new world, in a whole new era. The cities of Columbia and Rapture are literally worlds apart. I was far too caught up in the astonishing detail and reverberating atmosphere to ever expect … well, if you’ve played "Infinite" you know what I’m talking about.

That ending, the way all those folds come together, the way even the very first seconds of the game are put into an entirely new context is absolutely unprecedented. "Bioshock Infinite" is a 10-hour buildup to an absolutely mindblowing 15-minute punchline, and nine months later I’m still basking in the afterglow.

"The Last of Us" is different. More than anything released this year, or arguably, anything released ever, it feels like something more than a game. Maybe it’s the facial animations, or the solemnly beautiful landscapes, or the profound narrative strength, or the inclusion of two sympathetic, damnable and utterly believable characters in Joel and Ellie, but "The Last of Us" felt like the game I’ve always wanted games to feel like. The game I can show my parents, and maybe have them understand. The game that’s just as fun to play as it is to listen to. The game that I can say, without any asterisk or justification, will enrich you as a person. There’s no higher praise than that.