New ads play with gender and sexuality -- but is this embracing the LGBT community or exploiting it? 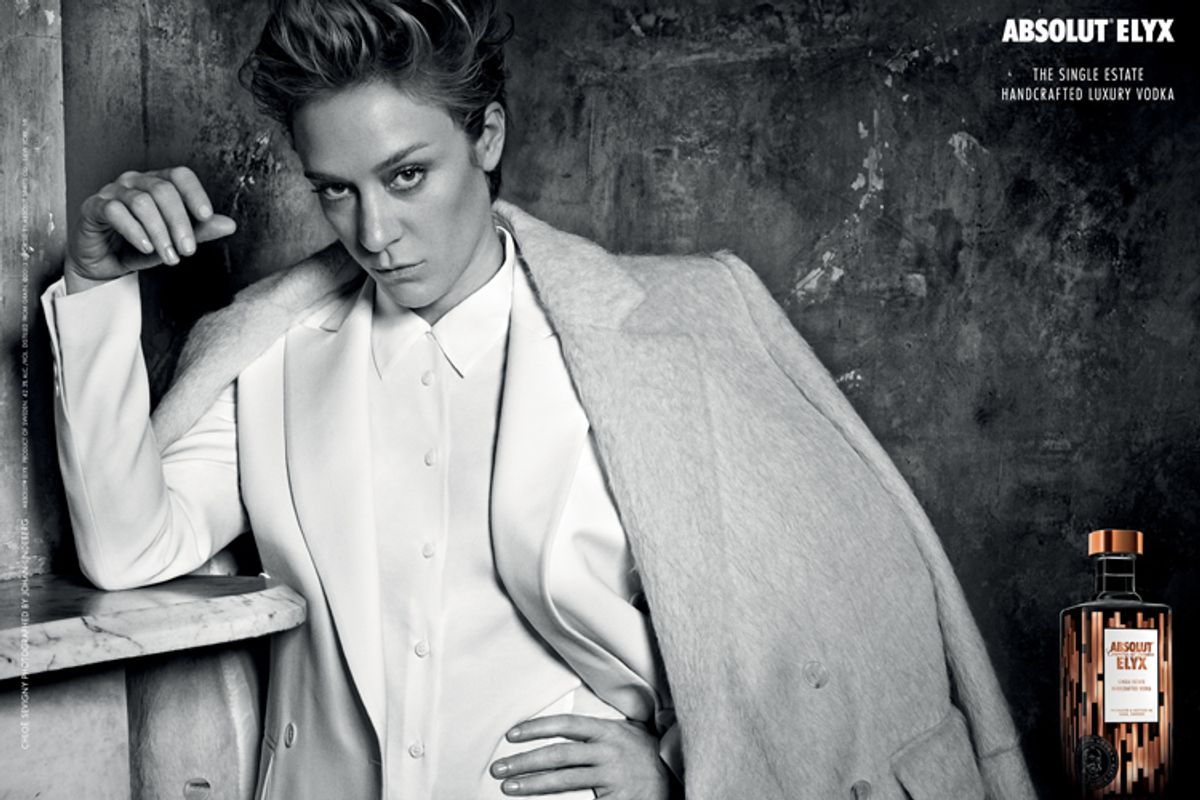 Nearly 20 years after RuPaul first appeared as the spokesperson for MAC Viva Glam, the host of “RuPaul’s Drag Race” is once again the face of the brand. But this time around, the ad, which appeared on a full page of the New York Times, is hardly alone in its queering of gender and sexuality. A 2013 Absolut ad depicted prominent actress Chloe Sevigny in a couple of androgynous suits, evoking drag kings if not gender ambiguity. A Chanel Cruise 2014 ad campaign shot by Karl Lagerfeld captures two women sharing an intimate moment in a corner, a softened butch-and-femme dynamic suggested in their outfits: one is wearing high-waisted slacks while the other pops a hip out in girly hot pants. A 2006 Flaunt magazine pictorial followed a similar format -- Scarlett Johansson was cast as the boyish counterpart to Dita Von Teese’s classically feminine persona.

Megan Zilis, account executive at NGK Global, says that luxury fashion brands are consciously moving in a more queer direction, evidenced by the use of queer spokespersons for even more commercial brands. “While the fashion industry has always been receptive to the gay and lesbian community," she explains, "this openness rarely appeared in a brand's carefully crafted message or identity due to mainstream climate. As the gay and lesbian community becomes more accepted, it is only natural that we start to see them more frequently represented in media and advertisements such as Ellen DeGeneres for CoverGirl, Arizona Muse for Estée Lauder, or JCPenney using a same-sex couple in a Father's Day ad.”

LGBTQ visibility in media has paralleled the progression of gay rights, with queer characters on television tripling between 2007 and 2010. Still, they made up only 4.4 percent of all TV characters as of 2013, according to GLAAD. But while the inclusion and mimicking of same-sex relationships in high-end fashion ads seems symptomatic of more accepting times, the representation is nevertheless capitalizing on the taboo of androgyny and female-centered gender play to sell products.

Francesca Vuillemin, wholesale director and brand manager at Gary Graham and a former international model who has worked for Elle, Glamour, Marie Claire and Redken, says that the fashion industry was one of the first communities to welcome the queer community with “open arms.” But she doesn't think the industry's subtle pivoting toward a more queer-friendly aesthetic is entirely altruistic.

“If you look at the ads you notice that this gender play is very much entwined with a wealthy lifestyle, hence they are trying to target an affluent audience that are in the market for high priced products,” she observes.

And, as with all advertising, the question remains if this queer visibility is being packaged as shock value or “edginess.”

“We are not yet at a point where corporations are unconsciously incorporating pro-LGBT campaigns,” Zilis points out when pressed about these choices.

But selling lady queerness along with next season’s hottest handbag is fraught, given that the coupling can reduce LGBTQ individuals to a “trend.” Not only is gender nonconformity and same-sex love a vehicle by which to shill designer goods, but the tactic runs the risk of diminishing queerness to an accessory.

“Being queer has become trendy,” Vuillemin notes. “On one hand this can be a plus. If you are a kid trying to come out you can feel that you will have support from your peers. On the other hand it can trivialize the importance of LGBT rights no matter what is trending.”

Factor in that these brands are commodifying LGBT identities for primarily heterosexual consumption and the use of super trendy queerness becomes even more troublesome. A spokesman for GLAAD commented to the Associated Press in 2013 that more commercial brands like Amazon are “no longer just targeting gay and lesbian people. They're targeting people like my mom, who want to know that a company embraces and accepts their gay and lesbian family members, friends and neighbors.”

A former fashion photographer turned portraiture artist, who prefers to remain anonymous, feels that some "queer" ads are more actually LGBTQ-friendly than others: “The RuPaul and Chloe Sevigny ads both seem fairly encouragingly open to be sure, but the Flaunt spread seems to play to a long-tame hetero-male-oriented sort of lesbianism, and seems less 'queer' to me than just 'sexy,' bordering on exploitative. I guess it's tricky to say so since lesbians have the right to be physically attractive even to heterosexual men, but I still feel the ad plays mainly to the latter's sensibilities.”

While some luxury ads, such as Dolce & Gabbana, have arguably used gay male dynamics in their campaigns (in addition to Abercrombie & Fitch's famous 2012 kiss), the use of subtly queer women appears to outnumber them -- perhaps because the visual of two women with a visible sexual tension can nevertheless appeal to that "hetero-male-oriented sort of lesbianism."

Zilis disagrees that the queer dynamics between women in ads are eye-catching simply because they're seen as risqué. She describes the aforementioned luxury ads as “evoking a powerful sense of fantasy” that goes beyond the sexual.

“It's one of the ultimate sensual indulgences illustrated by two affectionate young women." But she concludes,  "Hopefully we'll get to a point where it will no longer be a political statement for a company to include a gay or lesbian couple in their advertisements.”