I read people's secrets for a living. But these were the stories I couldn't forget 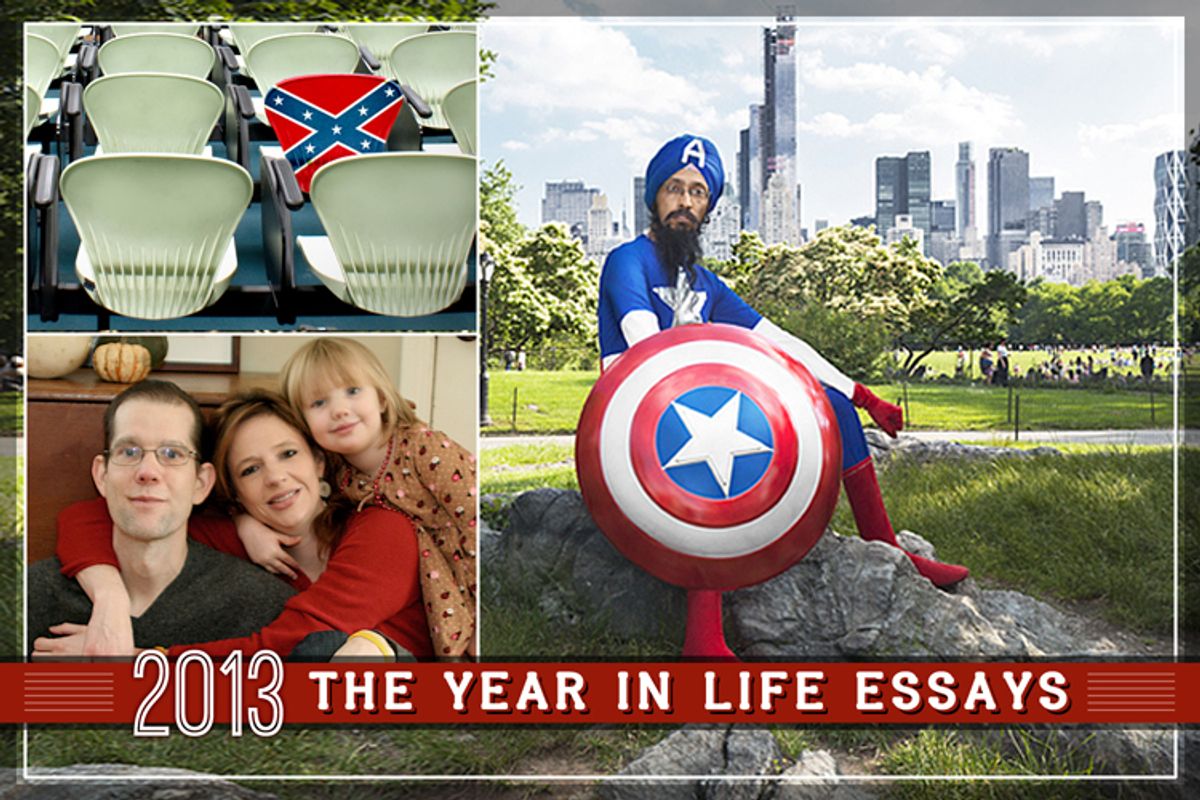 As the editor of the Life section, I read at least 20 stories a week, which amounts to more than a thousand a year. You wouldn’t believe all the secrets and drama I’ve encountered in these submissions. Affairs, abortions, rape, death. My inbox is like a priest’s confessional.

Most Thursdays, I hunker down and read through them all, and what I’m looking for -- more than shock, which is hard to elicit in me by now -- is surprise. I want to be startled by some idea, or a story I haven’t heard before, or a turn of phrase that assures me I’m in good hands. I know I’ve stumbled on a winner the same way I know I have a crush on someone. My heartbeat quickens, and I get that nervous fluttering in the belly. We publish about 200 Life essays a year, and the following is a painfully short list. But they are the stories I could not shake. I could probably tell you where I was sitting when I read them. Like great romances, these stories instruct me, challenge me, beguile me. Most of all, they stay with me.

“What He Said Before He Died"

Lee Ann Cox’s tale of her husband Kevin’s death is about people who love language, forced into a place where language fails them. I can’t believe all the emotional texture she manages to cram into 2,000 words. Sometimes, I still flash back to this moment near the end:

When I found him upstairs he was in despair, asking me over and over, “What am I going to do?” I have no memory of how I responded. I want to remember that I said something perfect but all I’m sure of is my single, wrenching thought: You are going to die.

"I Choose to Be Fat"

Salon had three mega-hits this year about women pushing back against the tyranny of skinny. This one was by Laura Bogart, tired of being bullied by the medical establishment for her weight. Bogart has written eloquently, here and elsewhere, about her abusive childhood. In this essay, she powerfully connects that bruised past with a current acceptance of her body at any size. It’s a riveting read.

I binged because I was frenzied with need. If I didn’t sink my teeth into something — anything — I wouldn’t know I was alive. “Food is not love” may have usurped “nothing tastes as good as thin feels” as the diet evangelist’s koan du jour, but I will never begrudge that little girl anything she had to do to survive.

“Captain America in a Turban”

There is so much to love about Vishavjit Singh’s personal essay, and Fiona Abud’s singular photography. I love that this random guy walked around Central Park in a superhero costume to challenge people’s ideas about Sikhs. I love that he spoke with tenderness and love to strangers, who in turn gave him the same. I love that as he’s about to depart on this mission, what frightens him is not the political statement of his costume, but a life-long self-consciousness about being too skinny. Here is an ordinary person daring to become a superhero in his own life. It’s a story I never could have imagined until he told it.

“White Pride in My Classroom”

When the founder of the White Student Union shows up in Ben Warner’s college class, he thinks he knows what to expect. Instead, Warner meets a soft-spoken man who pushes him to be a better thinker, and a better instructor. He receives, as he puts it, “my own education in human contradiction.” Warner tells this story with the insight and compassion of the best teachers.

“My Year of Heroin and Acne”

Chloe Caldwell’s story had me from its riveting first sentence: “I got a pedicure each time I promised myself I’d stop doing heroin — which is to say, I got pedicures all summer.” Her story about heroin abuse -- which she uses, in part, to quell the shame of terrible acne -- disturbed me and haunted me, but what surprised me most was how much I related. It is a heartbreak to crave something that is destroying you.

“The Craziest OK Cupid Date Ever”

A couple goes on a first date that spans 21 days and eight countries -- it sounds like the kind of story that only happens in the movies. But Clara Bensen's story is real, and so are the gorgeous photos that accompany her epic tale. What a magical piece. It's like a call to arms to live a more interesting life.

"I Used to Love the Bride"

Writer Anna Pulley once loved a woman, who eventually got engaged to a man. (These things happen.) The woman asked Anna to be a bridesmaid in her wedding. (These things happen, too, but much less frequently.) What happens next is a story about the ways we can bend to accommodate love's strange demands. "You have no idea what kindnesses you’re capable of," Pulley says at one point. A message we should all remember.

“Goodbye to My American Dream"

Tiffanie Drayton was born in Trinidad and Tobago, but her mother brought her to the United States for a better life. She did get a good education, but not without the sting of everyday racism. “My relationship with the United States of America is the most tumultuous relationship I have ever had, and it ended with the heart-rending realization that a country I loved and believed in did not love me back.” Drayton’s piece would probably have made this list regardless, but it holds a special place in my heart since Drayton met and fell in love with a Salon commenter on that story. Romance in the comments section -- the tale I never expected to read.

Who among us does not fear this fate -- a horrible picture, leaked everywhere and widely mocked. But writer Caitlin Seida doesn’t simply complain about her fate, she engages with her detractors, forcing them (and us, the leering audience who clicked on this piece in the first place) to think about who and how we laugh at strangers online. I will forever love Seida for letting us use the embarrassing picture as the main illustration. Taking the most embarrassing thing that happened to you and turning it into a story that changes hearts and minds? Now that is a power move.

“The Tell-All Memoir I Decided Not To Tell”

We often hear criticism about our “tell-all” culture. I understand the fatigue. And I understand our little Life section trades on the exhibitionism and voyeurism thriving in today’s marketplace, and my feelings about this are not uncomplicated. (A subject for another time.) But that’s why I was so inspired by Emily DePrang’s story about a memoir she sold but decided not to write. In a world that rewards unreflected confession, saying nothing can be an act of bravery.

"My Year on Match.com" by Anne Lamott

"I Taught at the Worst School in Texas" by John Savage

"My Inappropriate Relationship" by Jillian Lauren

"Pictures of People Who Mock Me" by Haley Morris-Cafiero

"My Fantasies of Mass Murder" by Brian McGuigan