From a hilarious disaster movie to a poignant romance, these films deserve more attention than they got 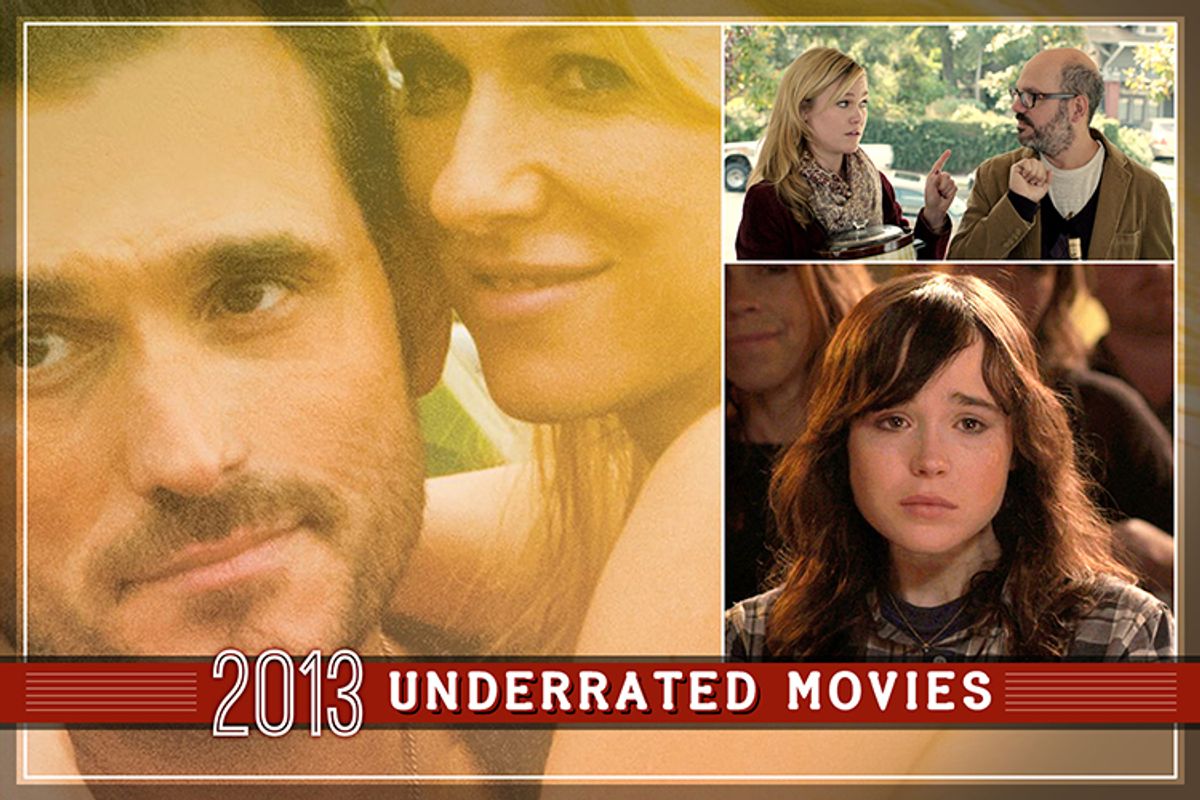 With all the top 10 lists celebrating the cinematic achievements in 2013, there were dozens of comedies, dramas and documentaries that failed to secure the audience they deserved. Some outstanding films came out this year, several by important and established filmmakers (Costa-Gavras, John Sayles, Michael Winterbottom) as well as by emerging directors (Alexandre Moors, Todd Berger, Jonathan Gurfinkel). But too many of these smaller films received an extremely limited theatrical release and/or were overshadowed by other films.

Director Alexandre Moors makes an auspicious debut with this hypnotic character study about the Washington, D,C., sniper. Lee (Tequan Richmond) is a teenager in Antigua, and John (Isaiah Washington) takes him under his wing. Back in America, they pose as father and son in Tacoma, Wash. John “adopts” Lee in part because he is still angry that his children have been taken away from him. Walking through his old neighborhood, he rants and huffs about everyone turning into “ghosts” or “vampires.” Washington gives a shrewd performance, making his despair palpable. But the impressionable, angel-faced Richmond is even more impressive. He remains mostly silent throughout the film, absorbing everyone and everything he encounters. His poker-faced transformation — the result of John’s insidious influence over Lee — is chilling. Especially when he commits murder. In imagining this horrific true story, Moors generates sympathy for these complex characters.

Sure, "This Is the End" was the apocalyptic comedy of the year, but that’s because it had more stars than "It’s a Disaster" had viewers. A couples’ brunch goes south fast when a bunch of dirty bombs are set off in Los Angeles. The guests, who are slightly tetchy to begin with, soon have their own very funny meltdowns. Secrets are spilled like toxic waste, and relationships — between friends and/or lovers — go nuclear. The film, written and directed by Todd Berger (who has a wry cameo as a hazmat-suited single neighbor), is full of hilarious deadpan banter. "It’s a Disaster" is a terrific comedy of manners, puncturing human foibles in debates about the importance of punctuality, and asking larger moral and ethical questions about the breakdown of society and what heaven is like. The film features uniformly amusing performances from the entire ensemble cast with America Ferrara and Julia Stiles the standouts.

"Capital," the latest film by Costa-Gavras (of "Z" and "Missing" fame), barely received a U.S. release. (It was pulled from some theaters even after being announced). Maybe the distributor felt the 99 percent would not want to see a juicy film about power games of the 1 percent. But they should. This slick, globe-hopping boardroom drama has Marc Tourneuil (Gad Elmaleh, superb) being appointed CEO of Phenix Bank after his boss develops testicular cancer. The board members and Dittmar Rigule (a wonderfully oily Gabriel Byrne), who controls the stockholders, think Marc is easily manipulated. But Marc is happy to prove everyone wrong in this game of “cowboy capitalism.” "Capital" clearly delineates the various characters, motivations and outcomes so that even viewers without an MBA in finance can follow the action. This briskly entertaining film culminates with Marc facing jail, staying CEO or going on a sabbatical. The outcome is both highly satisfying and appropriately cynical.

Naomi Watts and Matt Dillon give sensational performances in "Sunlight, Jr." as Melissa and Richie, a poor couple eking out hardscrabble lives in Florida. In writer/director Laurie Collyer’s scrappy little indie, Richie is in a wheelchair, collecting disability and trying to keep a sunny disposition. Melissa works at a convenience store (the Sunlight, Jr. of the title), where her miserable, demoralizing boss (Antoni Corone) thwarts her efforts to better her life. When Melissa discovers that she is pregnant, she and Richie try to find a way to manage, but factors — including her ex Justin (Norman Reedus), along with various reversals of fortune — keeps getting in their way. Although "Sunlight, Jr." is a downbeat drama, it is remarkably life-affirming because the characters’ spirits remain strong and loving in the face of adversity. Wisely, this film, a real sleeper, never gets cloying or inspirational. It just builds to an emotionally powerful ending.

It didn’t make the Oscar documentary shortlist, but "After Tiller" was one of the finest nonfiction films this year. Profiling the four remaining late-term abortion doctors (after the murder of George Tiller), this impassioned, heartfelt film provides remarkable access and insight to their work as well as their lives outside their clinics. Filmmakers Martha Shane and Lana Wilson treat both the doctors and their patients with incredible respect, and they give sufficient time to the antiabortion laws and protesters. "After Tiller" shows the struggles and difficult decisions that are made along with the emotional toll it takes on all of the parties involved. There are many poignant moments, as when one doctor asks, “What is life, and what does it mean?” Watching the counseling sessions with a rape victim, a 16-year-old Catholic girl having doubts, and even a patient too far along to be treated, is absolutely heart-wrenching. But such moments are critical for understanding the emotions, psychology and lives of these women who seek treatment 25-plus weeks into pregnancy. These case studies shine a necessary light on the important work of these brave, heroic doctors who risk their lives and their family members’ lives. "After Tiller" is both artful and thoughtful.

The fantastic scenes and speeches that open "Go for Sisters" not only grab viewers, but also remind them how great a screenwriter/director John Sayles can be. Bernice (LisaGay Hamilton) is a parole officer who “listens to sugarcoated bullshit all day.” Assigned to the case of her former friend, Fontayne (Yolanda Ross), Bernice does not punish her for parole violation, but, instead, keeps Fontayne in close contact. When Bernice’s estranged son Rodney is suspected in a murder, she asks Fontayne for assistance in locating him. Through one of Fontayne’s contacts, the women team up with Freddy Suarez (Edward James Olmos), a disgraced ex-cop with macular degeneration. The trio soon crosses into Mexico to search for the men who may be holding Rodney. Sayles gives his actors nuanced characters to play — Bernice goes from ball-busting parole officer to heartbroken mother — and he coaxes flinty performances out of his three marvelous leads. The script is laced with humor, and contains savvy observations about being careful when doing favors for people, and how one’s choices in life inform who someone is. As each character takes risks, crossing personal boundaries as well as legal borders — both literal and figurative — viewers will become invested as to what will pay off for whom.

Michael Winterbottom’s "Everyday" might seem like another example of British miserablism, but give this fine film a look anyway. Shot over five years, this absorbing drama involves Karen (Shirley Henderson) coping with life while her husband, Ian (John Simm), is in prison. Winterbottom films "Everyday" so intimately and intensely that the camera is almost intrusive when Karen and Ian sneak off for a shag when he is on day release. Much of the film presents the quotidian routines of the characters. Karen and her sons take long treks to visit Ian. Their meetings range from tender — Karen confessing that she misses/likes it when Ian fucks her — to tense, as when she confronts him for getting into trouble for carrying drugs. As Karen and Ian and the kids go about their everyday lives, Winterbottom shows without didacticism the impact an imprisoned father has on a family.

France’s entry for the best foreign language film Oscar was not the celebrated "Blue Is the Warmest Color," but this lovely, genteel portrait of the artist. This is not a biopic in the traditional sense; Pierre-Auguste Renoir was already famous by the time the film’s story begins in 1915. Director Gilles Bourdos’ elegant drama draws viewers into Renoir’s (Michel Bouquet) home, much like Andreé (Christa Theret), the artist’s latest model, who has come to pose for him, is. The fluid camera keeps moving, taking in the remarkable light and beautiful colors. "Renoir" is a sly, observational drama that chronicles Auguste’s relationships with his son Jean (Vincent Rottiers), who was wounded in the war; his wise-beyond-his-years youngest son, Coco (Thomas Doret, from "The Kid With the Bike"); and Andree, his muse who provides the key to the film. Unfolding as a series of small, striking moments — Coco splashing paint on Andree’s naked breasts, Jean helping Auguste with his painting — "Renoir" reveals itself to be a rich, vibrant and rewarding drama.

This dazzling first feature by Israeli filmmaker Jonathan Gurfinkel chronicles six sex acts — hence the title — performed by the teenage Gili (Sivan Levy). The film hooks viewers by asking: Who holds the power in each encounter? In act one, Gili pleasures Tomer (Roy Nik). Act 2 has her coupling up with Omri (Eviator Mor). Although Omri says he cares for Gili, he practically pimps her out to his friends and family members. Is Gili acting when she encourages Omri to meet in a club bathroom for an orgy? "S#x Acts" provides few easy answers. But this stylish film does present a fascinating depiction of a sexually active teenage girl’s quest for social acceptance in the digital age. Levy gives a very assured performance. An uncomfortable scene between Gili and a boy named Shabat emphasizes her fragility and strength. Gurfinkel films "S#x Acts" without judgment, and it is riveting throughout — especially when Gili converses with the hypocritical (and hyper-critical) girls in her high school. They use Gili too, albeit in a non-physical way. All of these teens are horny, reckless, gossipy and vapid — just like those in "Spring Breakers." Gurfinkel presents their bad behavior in a cogent film that is at once urgently concerned and coolly anxious.

A moody film about moody characters, writer/director Lyn Shelton’s "Touchy Feely" contrasts the personal and professional lives of two very different siblings — massage therapist Abby (Rosemarie DeWitt) and dentist Paul (Josh Pais). Abby is having doubts about her relationship with her boyfriend Jesse (Scoot McNairy), when he asks her to move in with him. She soon finds herself sickened by the contact of skin. Meanwhile, Paul finds his practice booming when he is said to have cured a patient’s TMJ pain. "Touchy Feely" explores the way people inexplicably, unexpectedly touch the lives of others, but also how they mask their feelings, and hide what they want to express. The performers exhibit great body language, particularly when Paul climbs awkwardly onto a massage table for a Reiki treatment. "Touchy Feely" is not as feel-good as "Enough Said," which also concerns a romantically troubled masseuse, but it has its own idiosyncratic energy. Plus, Abby’s poignant conversations with her ex (Ron Livingston) provide some very affecting moments.