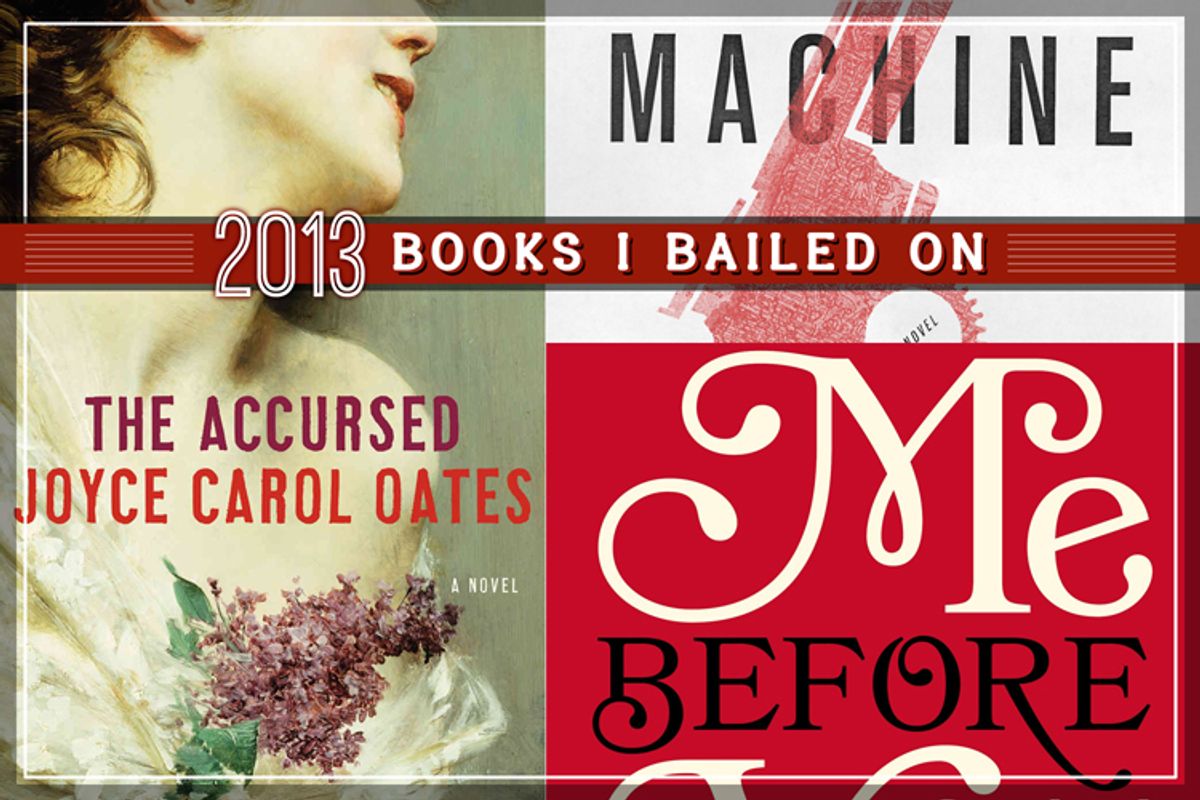 De gustibus non est disputandum — there's no arguing over taste — is a maxim worth quoting in its original Latin as a reminder of just how long the idea has been around. As with many aspects of human nature, the Internet only makes this disconcerting fact more visible, in, for example, the flagrantly categorical opinions people express about books, both the ones they hate and the one they (inexplicably) like.

Critics are in the business of defying this principle every day — arguing about taste is our job — but that doesn't mean we aren't acutely aware that we have no objective basis for insisting that a Dan Brown novel is badly written or that Joan Didion is a sublime stylist. A quick perusal of the one-star Amazon reviews awarded to beloved classics (perennial clickbait for listicle journalism) underlines the truth that there is no cultural product that everyone likes. Not even the Beatles.

With that disclaimer, here are some books I couldn't bring myself to finish in 2013. What to Read, the column I write for Salon, singles out the best book I've found that week, so I don't end up writing negative reviews and therefore am seldom forced to finish a book I don't care for. But, contrary to the recent outbreak of Chicken-Little hand-wringing about the decline of critical standards, this doesn't mean I'm indiscriminate. The vast majority of books are published into obscurity and my thumbs-downs typically take the form of allowing them to remain there. For that reason, what follows are my responses to books you might possibly have heard of, rather than the absolute worst things I read. (Those would be the half-dozen self-published YA and fantasy novels I looked at while researching a piece on reviewer-author feuds on Goodreads.)

"Me Before You" by Jojo Moyes. A surprise bestseller, this novel is narrated by an out-of-work waitress with a propensity for quirky, brightly colored outfits who gets hired (despite a lack of prior experience) to care for a surly, suicidal, upper-class quadriplegic man. It was clear from the start that I'd boarded the express train to Tearjerk Town, which is not necessarily a disqualifier, but I also didn't believe any of it for a minute. The narrator is a cross between insecure Bridget Jones and the Manic Pixie Dream Girl of indie-movie notoriety; the inside of her dithering head became intolerable after about four chapters.

"Gun Machine" by Warren Ellis. Sometimes, the timing is just off. This is a supernatural detective story about a tough cop in pursuit of a time-traveling killer who keeps a shrine stocked with guns used in murders — exactly not the sort of thing you want to read a month after the massacre at Sandy Hook Elementary School. There is a type of genre fiction that revels in the preoccupations of its villain while pretending to deplore them, and this book struck me as far more complicit in the bad guy's gun fetishism than I could stomach.

"The Accursed" by Joyce Carol Oates. I'm pretty sure there's an excellent Lovecraftian/historical thriller somewhere in this doorstop, but it's buried under far too much underbrush.

"Anatomy of Violence: The Biological Roots of Crime" by Adrian Raine. This farrago of pseudoscience written by a criminologist is everything that's wrong with "evolutionary" theories about human behavior wrapped up and deposited between two covers. Jam-packed with dubious speculation based on misperceptions of how evolution works, "Anatomy of Violence" is all the more alarming because Raine seems to think the ideas in it ought to have a role in public policy. Not just a bad book, but a potentially dangerous one.

"At Night We Walk in Circles" by Daniel Alarcon. Everybody is far more enthralled by the inner workings of their own profession than an outsider could be, but writers are also in a position to indulge this obsession at exceptional length. That's why I'm leery of novels about writers, and any fiction in which a passel of (almost entirely male) poets, playwrights and other artistes in their 20s ping from cafe to crashpad ruminating about which of them is the biggest genius or most dashing bohemian will face a particularly tough crowd in me. Even the Latin-American setting and signs that the story might transcend its artsy theatrical milieu couldn't win me over in this case, but, hey, I couldn't finish "The Savage Detectives," either, so I suggest that Bolaño fans check this one out anyway.

"Confessions of a Sociopath" by M.E. Thomas. Despite beginning with perhaps the greatest authorial disclaimer of all time ("... this story is told through the lens of how I see the world, including my megalomania, single-minded focus and lack of understanding about the inner worlds of others"), this pseudonymous memoir reeks of fish. I'm pretty sure that a genuine sociopath would never consider tipping her hand by writing such a thing.

"Truth in Advertising" by John Kenney. A satire of the advertising industry, one of the most satirized sectors of modern society, has to be whetted to a razor's edge of sharpness to earn its keep. This one, despite some good writing, takes too many cheap, easy and obvious shots.

"Mastermind: How to Think Like Sherlock Holmes" by Maria Konnikova. Did you know that Conan Doyle's immortal character became the world's greatest detective by paying close attention to details and then subjecting them to alert, rational scrutiny? Of course you did, and you certainly don't need this undercooked collection of padded blog posts to explain it to you. Anyone smart enough to want to think like Sherlock Holmes is too smart to gain anything from a book this elementary.