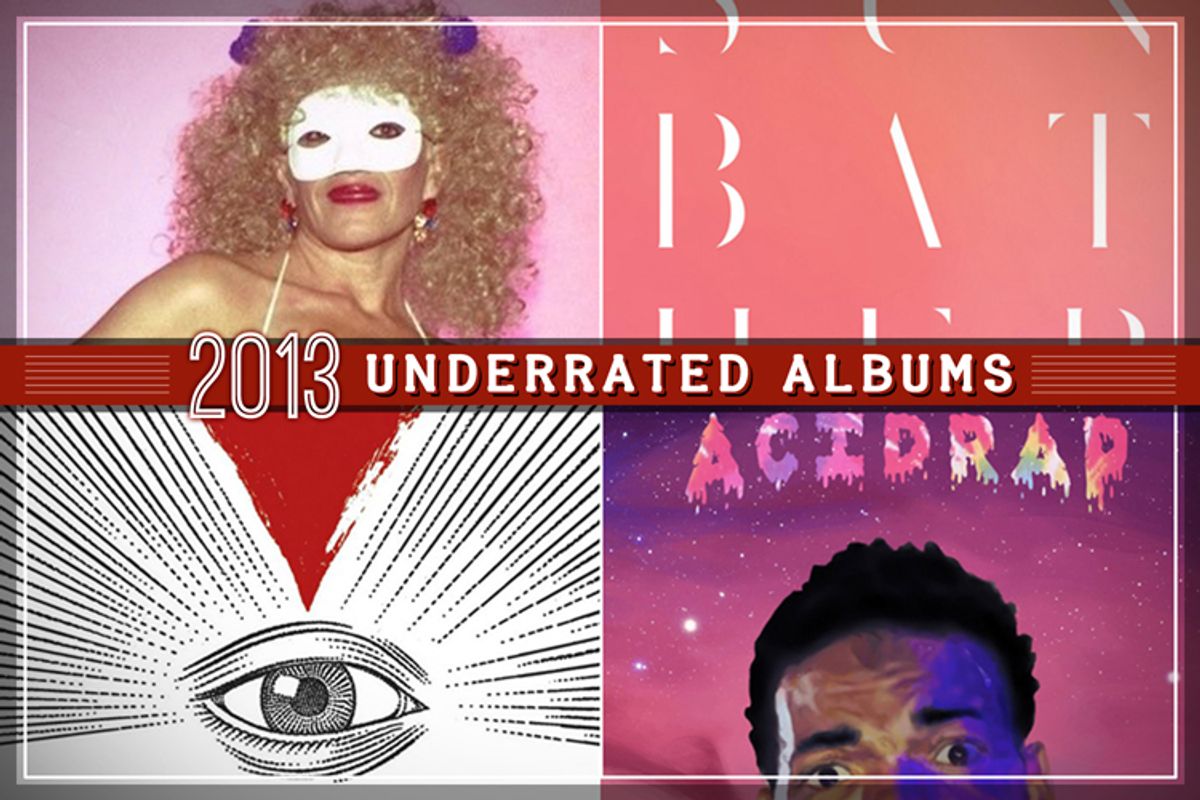 Between the Daft Punk renaissance and a summer dominated by Disclosure and Yeezus, 2013 was a strong year for music. So many good albums debuted that far too many got lost in the shuffle. This included critical favorites and indie debuts from bands trying to make a name for themselves in a crowded marketplace. If you’re trying to catch up on your listening before the end of the year, here are 13 albums that deserve some more attention.

The second release from Dev Hynes, Cupid Deluxe shows the artist in transition to a bigger sound than on previous records. Tracks like “Chamakay” blend Hynes’ indie Prince vibe with a more expansive funk and jazz sound reminiscent of The Weeknd and Solange. Mr. Hynes was a producer on Ms. Knowles’ recent “Losing You” and Sky Ferreira’s “Everything Is Embarrassing,” and Cupid Deluxe continues to explore that palette in intoxicating ways. It’s a bold step into the next generation of R&B.

Chance the Rapper’s second mixtape was released to deafening acclaim from critics, although it wasn’t quite the crossover success many expected. However, Chance the Rapper is barely out of high school; he’s got more than enough time to “make it big.” This shows him well on his way. The record is meticulously packaged and composed, featuring some of the best line deliveries you’ll hear on any hip-hop record this year. It’s both a richly textured mood piece and a coming out party for the talented Chicago rapper.

“Sunbather” is one of the year’s definitive masterpieces, a work that brings together shoegaze, metal and post-rock to produce a record that’s truly epic in scope. "Sunbather" feels like what would happen if Jesus and Mary Chain and Explosions in the Sky got together to record a metal record -- powerful and emotionally resonant, but with screaming. Deafheaven goes for broke in Sunbather (some tracks stretch over 14 minutes), but their ambitions never get the better of them.

Foxygen, “We Are the 21st Century Ambassadors of Peace and Magic”

There’s little that Foxygen can’t do. This is a band that refuses to be pinned down by genre, and “We Are the 21st Century Ambassadors of Peace and Magic” finds the rock duo experimenting with everything from folk, acid rock and French pop. The band’s third album recalls everything from Stereolab and the Free Design to the Velvet Underground, but the sound is all their own. But for all its Magnetic Fields genre-hopping, it’s the record’s smaller moments that stick with you -- the simple sweetness of songs like “San Francisco,” music as light as a balloon.

The three Haim sisters grew up on Americana, and their first record feels appropriately classic. The 11 tracks on "Days Are Gone" have a Pat Benatar vibe that adds a sing-along swagger to the band’s melodic indie pop. However, Haim are more than their '80s synth influences. The band is a reminder of why we started listening to the radio in the first place, a throwback that’s a breath of fresh air in the current pop marketplace.

Julia Holter called "Loud City Song" a “loose interpretation” of "Gigi," the 1958 musical starring Leslie Caron. Holter adapts not just the narrative but the feel of the film itself, gorgeous and unsettling -- its sinister tones bubbling under the surface. The sparse "Loud City Song" emits a laconic siren’s pull, inviting you into its bizarre and bewitching world. Julia Holter’s album isn’t just a love letter to the most famous adaptation of Colette’s work but a necessary new take on the material, a record you won’t be able to get out of your head.

After working on Killer Mike’s critically beloved 2012 record "R.A.P. Music," it’s easy to see why El-P was so quick to team up with the rapper. The two artists bring out the best in each other for an album that feels like more of a genuine collaboration than "Watch the Throne," Jay Z and Kanye’s glorified mashup record. "Run the Jewels" picked up where "R.A.P. Music’s" powerful electro hip-hop left off -- it feels not just like a spiritual sequel to a great album but the beginning of a beautiful friendship.

New Moon finds the Men at their most accessible, toning down the noise rock for a more melodic sound. The punk band handles the transition beautifully, showing that their 2012 breakthrough “Open Your Heart” was far from a fluke. This is a band that’s finally coming into its own, putting a personal stamp on influences as diverse as the Replacements and Dusty Springfield. The Men credited Tom Petty as a key inspiration for the album, and Petty’s Americana suits their sound well, more personal and resonant than they’ve ever been. But if “New Moon” is any indication, the best is yet to come from the Men, as they continue to grow into one of the finest bands in punk today.

Parquet Courts had the misfortune of coming out after acclaimed albums from Tame Impala, Real Estate and Local Natives, works “Light Up Gold” instantly recalls. However, Parquet Courts is pulling for something deeper in rock history. It’s got a post-punk vibe reminiscent of Wire and the best of Sonic Youth -- with a little bit of Southern garage rock thrown in. What the band lacks in freshness it makes up for in influence, and “Light Up Gold” feels like rediscovering an old classic.

Roger Ebert once argued that emotional art needn’t be depressing. Art is the transformation of our tragedies, finding the solace and liberation in heartbreak. This is the perfect thesis statement for “Muchacho.” A little bit Bill Callahan and Kurt Vile, the album is both dreamy and dark with an experimental beauty that speaks to our deepest longings. The band’s sixth album is the kind of record you will need to return to time and again, a heartbreaking epic that makes for rewarding, if not exactly easy listening. This is spiritual heavy lifting.

Working with Kanye West has dramatically changed Pusha T’s sound -- but only for the better. The former Clipse member released his first solo album on Kanye West’s GOOD Music label, and “My Name Is My Name” appropriately feels like a lot of West’s recent work. As Yeezus is the best rap artist working today, this couldn’t be higher praise. It takes a village to raise a great rap album, and the album features cameos from what feels like half of the rap world. This is truly a community effort, one of the best solo debuts in recent memory.

It’s actively difficult to believe that this is Savages’ first full-length album. Like Disclosure’s "Settle" and Chvrches’ "The Bones of What You Believe," “Silence Yourself” finds Savages already in full stride, an extremely confident debut that stands up to the best of the riot grrrl genre. Savages are the heir to Sleater-Kinney’s throne, and "Silence Yourself" is a raw and ferocious album that doesn’t let up over its 11 tracks. In a rock culture too often dominated by men, Savages are here to prove that they belong. They do more than that, showing they do post-punk better than just about everyone.

In the past few years, the rock landscape has been particularly welcoming to new acts, and Speedy Ortiz is a major standout from 2013’s many debuts. Produced by Dinosaur Jr.’s Justin Pizzoferrato, Major Arcana showcase the band’s '90s alt rock vibe, and “Tiger Tank” feels like the best song Liz Phair never recorded. Lead singer Sadie Dupuis used to be the lead singer of an all-female Pavement cover band called “Babement,” and the time Dupuis spent studying their songs clearly rubbed off. Speedy Ortiz doesn’t just affect their lo-fi influences. They live them.