Architects unveil plan for $360 million bike path in the sky

SkyCycle would allow commuters to bike high above London's traffic 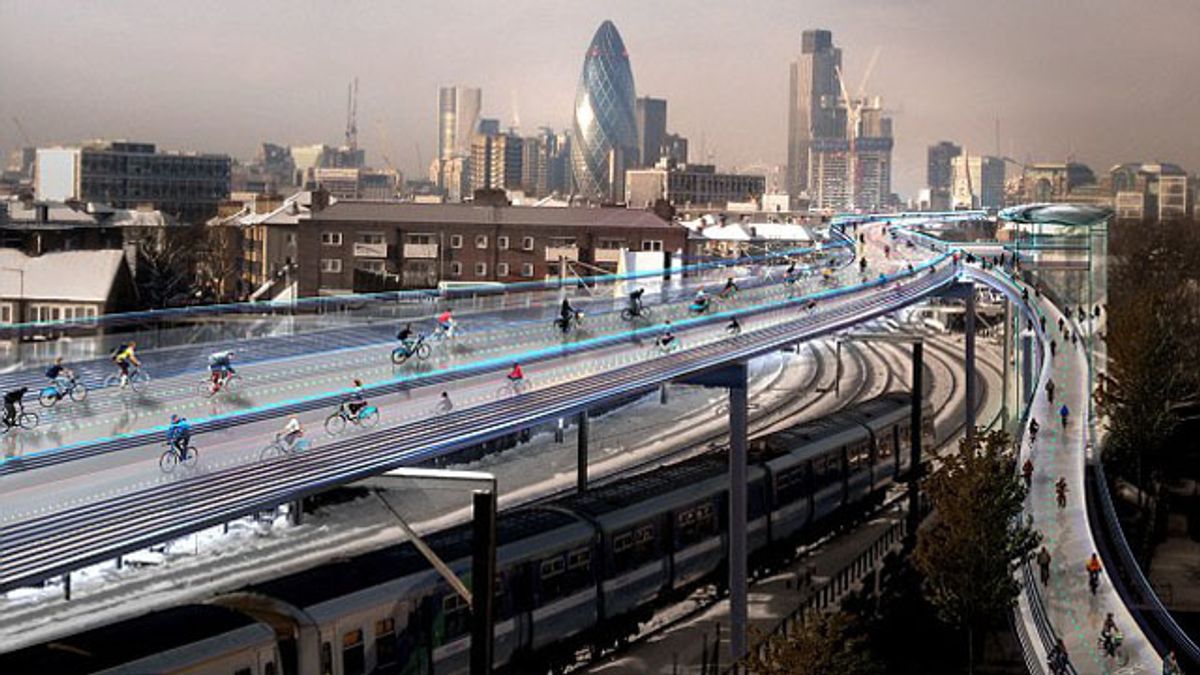 More and more cities are investing in ways to get bikers on the road, but London has been particularly preoccupied with keeping them safe. After a particularly brutal spate of deaths last year, Mayor Boris Johnson drew the ire of cyclists when he insisted "there’s no amount of traffic engineering that we invest in that is going to save people’s lives.”

Actually, about $360 million of engineering should do it. That's according to plans for SkyCycle, a 137-mile network of elevated bike paths that would allow Londoners to pull a Mary Poppins by riding above the city's traffic. Unveiled this week by a team of architects including Lord Norman Foster (the guy who designed that giant egg-shaped building), the design is two years in the making and would take about 20 years to complete. The Guardian has more:

The project, which has the backing of Network Rail and Transport for London, would see over 220km of car-free routes installed above London's suburban rail network, suspended on pylons above the tracks and accessed at over 200 entrance points. At up to 15 metres wide, each of the ten routes would accommodate 12,000 cyclists per hour and improve journey times by up to 29 minutes, according to the designers.

Lord Foster, who says that cycling is one of his great passions, describes the plan as “a lateral approach to finding space in a congested city.”

“By using the corridors above the suburban railways,” he said, “we could create a world-class network of safe, car-free cycle routes that are ideally located for commuters.”

As bike enthusiasts and infrastructure wonks alike keep themselves busy arguing over whether SkyCycle is even a good idea, the design firm's still trying to raise money just to study its feasibility. But hey, cities can dream.

Correction 1/2/14 3:45 p.m. ET: A previous version of this story quoted the estimated cost of SkyCycle at $3.6 million. The correct amount is $360 million. Salon regrets the error.