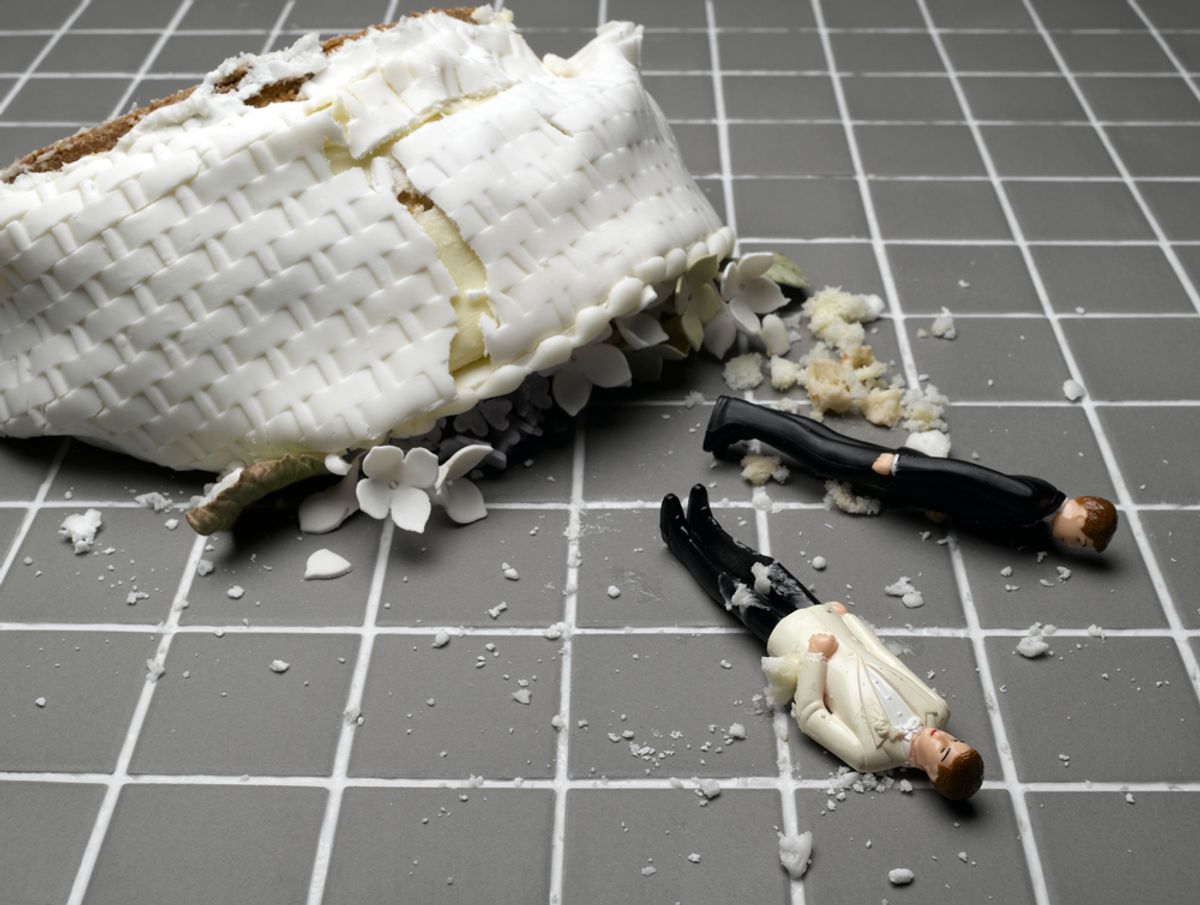 And marriage did not die of natural causes, either. It was murdered by the 18 states with marriage equality laws and a recent court decision in Utah allowing consenting adults to live and have sex with multiple other consenting adults, according to Fox News contributor Keith Ablow.

That Ablow would be hyperbolic about a trend toward greater legal equality for gay couples and the decriminalization of nonmonogamous sexual relationships isn't surprising. What is unexpected coming from Ablow is that in his quest to be a bigot, he managed to pen a radical critique of marriage that mirrors what queer activists and other critics of marriage from the left have been arguing for decades.

Namely, that the state should get out of the marriage business.

According to Ablow, the institution is officially "over" because recent marriage equality victories and the nullification of parts of Utah's anti-bigamy statute have challenged its traditional legal boundaries and engaged the courts in the question of what kinds of relationships may also be eligible for recognition from the state.

He argues these things using ominous language that is supposed to scare you, but his basic point is correct. These legal challenges have created an unprecedented space to talk about the kinds of households, families and relationships that the state recognizes, and whether or not these distinctions serve us and how we live our lives now.

"This is definitely an opening to raise a set of questions about how our personal relationships are recognized by the state," Lisa Duggan, professor of social and cultural analysis at New York University and a critic of mainstream discourse around marriage equality, recently told Salon.

"We need some kinds of recognition for things like health proxies, childcare, child custody and jointly owned property. There are circumstances where we need to have these relationships recognized, but it doesn't make any sense that rather than recognize the relationships we actually have -- whatever they are -- that the state only recognizes conjugal couples."

The legal privileging of married couples leaves out the kinds of relationships that shape our lives and the people who, as Duggan says, "really are our first call in the case of an emergency." In a culture that is increasingly defined by so-called nontraditional households, including single mothers, breadwinning mothers, multigenerational families, co-parenting families, aging friends and others, the question of who "counts" as a family and who does not in the eyes of the state becomes particularly vital.

But challenging the state to look beyond marriage and recognize other relationships of mutual care is nothing new and nothing to be afraid of, contrary to what Ablow argues. In fact, for an example of how this works in practice, look no further than Utah, one of the most conservative states in the country.

As Troy Williams, a Salt Late City-based LGBT activist recently told Salon, long before the Utah Supreme Court ruled against the state's absolute ban on marriage equality, Salt Late City approved an adult designee employer benefit to accommodate a wide range of relationships and households beyond traditional marriage that far exceeds what most employers in other "progressive" states offer.

"If you are single you can give your benefits to your grandmother, your best friend or anyone you choose," Williams explained.

It's a radical legal alternative to marriage that Williams hopes to preserve, even with the marriage equality victory.

"I don't think people realize how progressive [the adult designee program] is. People may see it as political crumbs or a consolation prize, but I think that our job now is to continue to educate people about how important it is to maintain a variety of different dynamics in our lives.

"You have to have multiple kinds of people in your life to be a healthy person," he continued. "Cultivating those networks should be our goal. Marriage can be part of that, but shouldn't be our only objective."

And if we are going to push for a more expansive kind of legal recognition for families and households, we need to decenter marriage. Which is an argument that, strangely, Ablow articulates with some force in his Fox News piece:

The truth is that government never had a defensible role in marriage.  It should always have been the exclusive domain of the individuals and institutions that choose to recognize such interpersonal unions.

Churches should be allowed to define marriage as they wish and offer marriage certificates only to those who comply with their definitions.  Temples, just the same. Communes can do it, for all I care. Any organization, in fact, should be able to award the status to anyone they like.  But, states and the federal government should have no part in it, whatsoever.

Moving beyond marriage and toward a more expansive definition of kinship, in addition to falling in line with the kinds of relationships we actually have, also functions as a critique of the economic underpinnings of the conservative marriage movement, which often frames marriage as a way of shifting the "burden" of care from public programs to the private household.

"Talking about kinships networks being broader -- if you start saying that, you are talking about collectivity," according to Duggan. "The way that we are collectively responsible for each other and how we can provide for that. We have to democratize and decenter the ways we recognize these relationships. That should be the goal -- not moralizing about 'proper' and 'improper' forms of love."