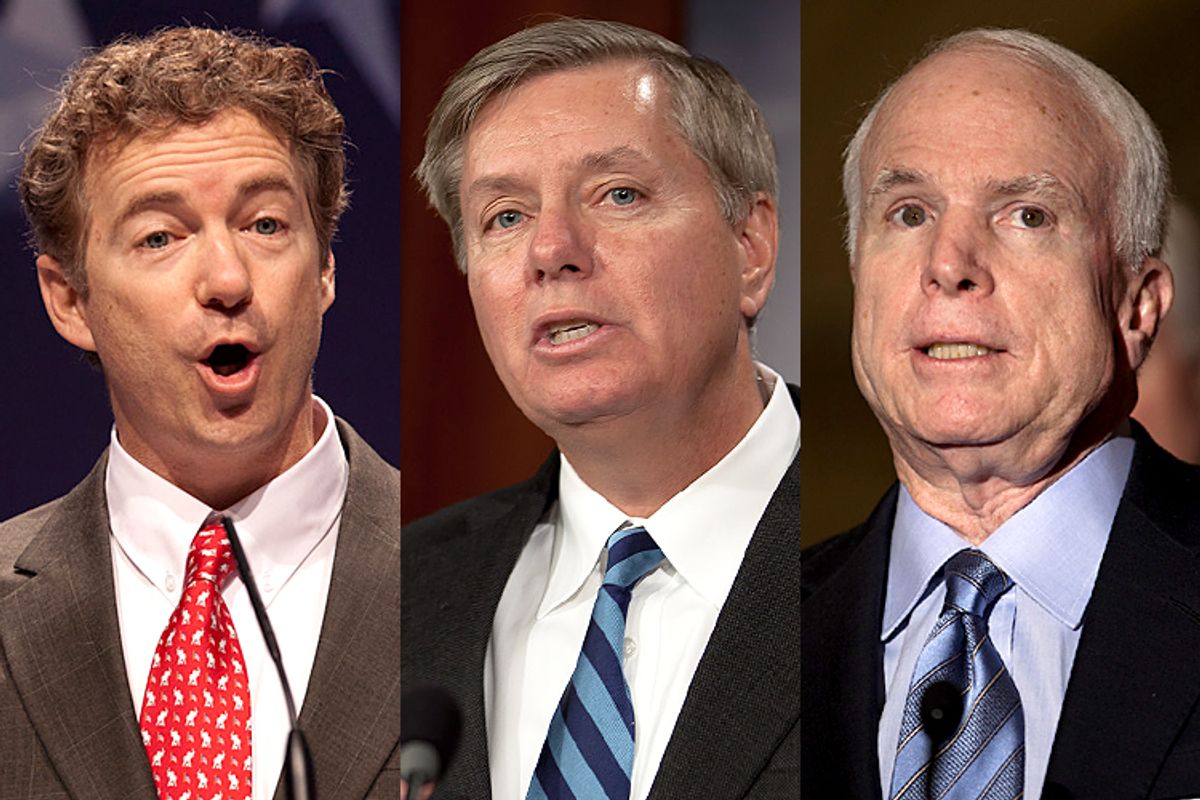 A quick look at the House and Senate vote calendars indicates that Congress did not in fact come back into session over the holidays to repeal the Affordable Care Act, which means that as of today (depending on how you count it) millions and millions of people who were previously uninsured now have comprehensive healthcare coverage.

There's the 3-or-so million young adults under 26 who have been covered under their parents plans for a couple of years now, about 4 million new Medicaid beneficiaries, and some large percentage of the 2 million who have enrolled in a private plan via Healthcare.gov or one of 14 state-based insurance exchanges and submitted their first premium payment.

Their benefits are now active, which means proponents of repealing the law have a severe entropy problem on their hands. Just like you can't re-create an erased image by unshaking an Etch-A-Sketch, you can no longer re-create the pre-Obamacare status quo by repealing the law. Some new beneficiaries would be returned to the ranks of the uninsured, just as they were before, but others would return to an individual market they were happy to leave behind, and even the thin skim of people who were happy with plans that have been canceled wouldn't necessarily be able to reclaim them.

After spending three months effusing sympathy for people who've had their insurance plans canceled, Republicans can't really continue to support repeal while ignoring the (2 million? 6 million? 9 million?) who would lose their coverage as a result. But the GOP lacks a consensus replacement for Obamacare, and the plans that caucuses within the party do support don't do anything for the new beneficiaries, and fall well short of Obamacare's coverage expansion in the long run.

They've walked into a cul-de-sac planting mines behind themselves along the way.

Under the circumstances, it'd make a lot of sense for Republican leaders to seek a New Year's détente. Stop pandering to their own voters by behaving as if outright repeal is an eventual possibility; stop fogging things up for their own constituents, many of whom would be better off if they understood what the law has to offer them. Democrats want to fix flaws in the Affordable Care Act, Republicans could agree to support some improvements in exchange for making the law system more GOP-friendly without undermining its structure.

But in the least shocking news you'll hear all year, Republicans lack both the intent and ability to adopt a less combative approach to healthcare reform. They like how the last three months of 2013 unfolded politically (a three week government shutdown notwithstanding!) and will do whatever they can to make 2014 look a lot like that. They'll probably even fund the government and increase the debt limit without inviting crises to keep the media focused on Obamacare.

This week they will begin exploiting for political gain the misfortunes of people who seek medical care under the impression that they're covered only to find out, for some reason, that they're not. These might be beneficiaries who, due to technical woes and clerical backlogs, are having trouble accessing their benefits, or people who thought they had enrolled but never actually did.

When someone finds he's eligible for fewer subsidies than he believed, conservatives will pretend to share his outrage; when a family earns more money than expected and must rebate subsidy dollars to the IRS (a clawback provision Republicans supported!) the GOP will be there.

“The hardest problem for us is what to do next,” Graham said. “Should we just get out of the way and point out horror stories? Should we come up with a mini Contract With America on health care, or just say generally if you give us the Congress, the House and the Senate in 2014, here’s what we will do for you on multiple issues including health care? You become a more effective critic when you say, ‘Here’s what I’m for,’ and we’re not there yet. So there’s our struggle.”

According to the Times, "Mr. Graham said that Republicans would probably get away with denouncing the Affordable Care Act through the midterm elections, but that by 2016 they would need to have a fully formed alternative."

The Democratic response to these stories will take the form of aggregates as much as discrete stories. Some of Obamacare's "winners" will win with lifesaving surgery or chronic care. But most will just benefit with access to routine care. "Area Man Gets First Colonoscopy" isn't a great counterpoint to "Area Man Can No Longer See Same Doctor."

So Democrats will also brandish a growing beneficiary total. By the end of March, that figure will probably exceed 10 million. Millions more, even the law's greatest skeptics, will know people whose lives are better as a result of Obamacare. If they're smart, supporters will organize devoted beneficiaries and their families so that Republican candidates begin to fear attacking the law, and Democratic candidates regain confidence in their ability to run on a platform of keeping and improving it.

By spring, we should have a clearer sense of how these conflicting constituencies stack against each other, and, thus, how the political story will play out. But until then I expect inertia will prevail on the right. They'll continue to pretend that new beneficiaries don't exist and to solicit horror stories as if the calendar still said 2013, and will do so for as long as they sense it's to their political advantage.